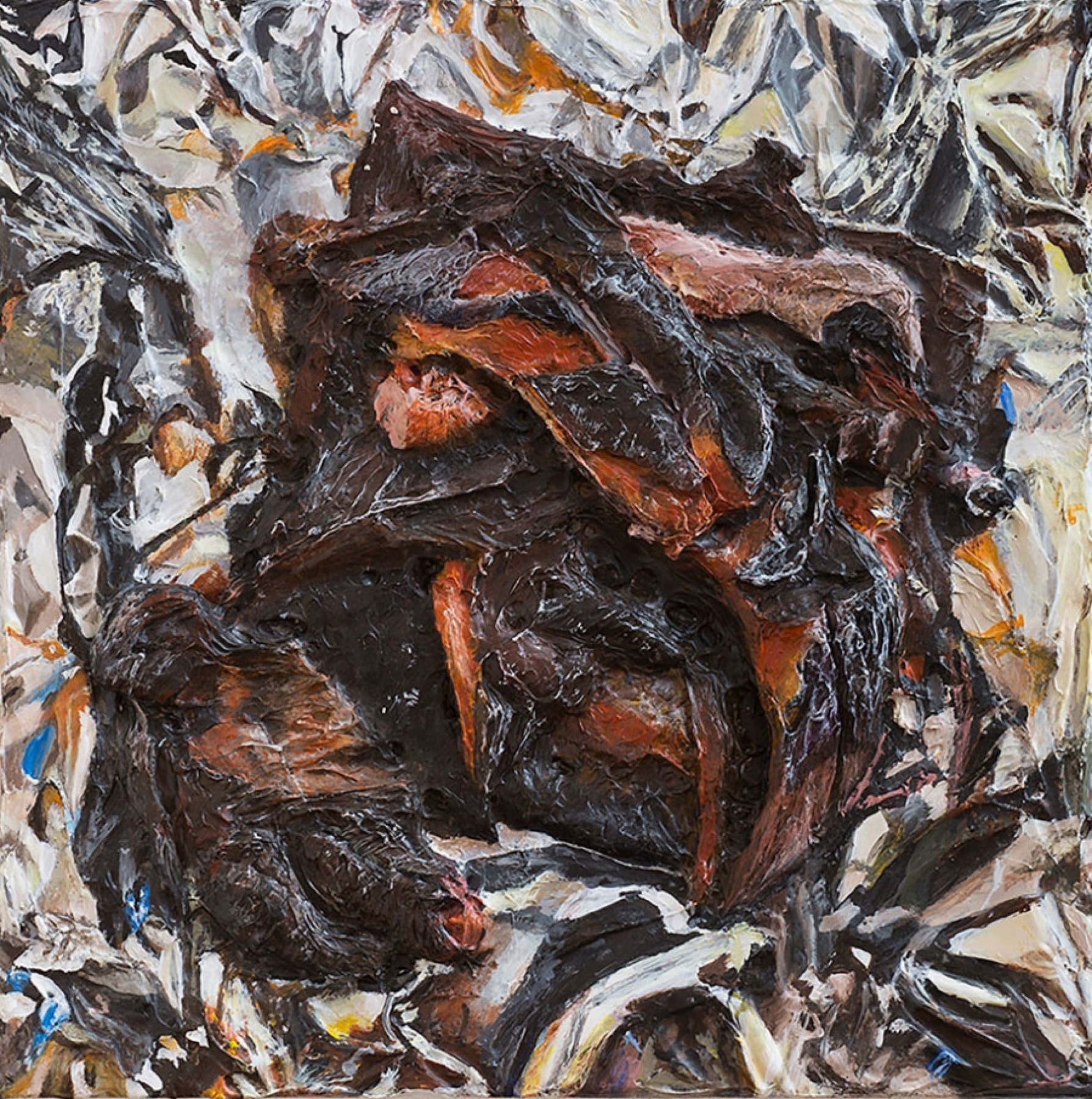 When I talk about Helen’s with people who have never met the woman or tasted her barbecue, I speak of the fierceness and intimacy of her labor and what it means to claim an audience with her. I talk about the woodpile out back, stacked higgledy-piggledy with splits of hickory. And I do my damnedest to bring the dirt-floored pit house at the rear of the restaurant to life.

Two barely controlled fires burn there in a cinder-swirled room constructed of timbers and tin. At back left, Helen turns hickory into coals in a four-block-high burn box topped with a buckled rectangle of sheet metal. Three steps away, a second fire in a near identical pit, heaped with hunks of pork and logs of baloney, smolders. I tell of the dense smoke that curls up and out via gaps at the eaves, and about visitors who hack and cough and whose eyes puddle with tears as they exit that screen-windowed shed, while Helen stands undaunted amid the ash and soot.

I’ve thought a lot about what draws me to Helen’s, and to similar restaurants across the South where I don’t know the owner well enough to hug her. Is this about time travel? Do I somehow process joints like they are portals to a Southern past? Or is my devotion rooted in class difference, and a want to span that chasm? Is it born of what Tom Wolfe referred to as “nostalgie de la boue,” a term that translates from the French as a longing for the mud, and references, in his usage, the gauche thrill that the middle and upper classes take in working-class experiences and entertainments?

Time at Helen’s raises questions, small and large. Other than great barbecue, and my respect and affection for the woman who owns the restaurant, what calls me to Brownsville? And, more broadly, what drives middle-class Southerners to seek pleasure and solace in places often referred to as joints and shacks?

A collection of twenty-three hand-turned jugs, made in the American South in the latter half of the twentieth century, stands guard at molding height, backlit above the kitchen sink in our Oxford, Mississippi, home. I collected them in the early 1990s, back when I obsessed over folk art more than what I might as well call folk food. I lived in Atlanta then, and on weekends I drove the mountains of Georgia and North Carolina, in search of face jugs—turned clay pots often shaped with exaggerated human features.

Enslaved Africans working in Georgia and the Carolinas likely developed the American form, but by the time I began collecting face jugs, mountain whites like Lanier Meaders and Chester Hewell were leading makers. Among my prizes is a Hewell “candelabra jug” with a glossy black head that holds six tapers, splashed with a blue glaze made from Milk of Magnesia bottles. Three slots down stands an anthropomorphic Meaders jug, black-green with rock teeth and piercing ceramic eyes.

I used to tell myself that when I moved from Atlanta to Oxford in 1995, I left folk art behind. That was partly because I realized that folk art studies was a crowded and contentious field, and partly because, as I stumbled down a path toward thinking and writing about racism and its imprint on the region, I fell for the possibilities of thinking and writing about food. Later still, I came to recognize that instead of collecting folk art, I was, on my visits to barbecue joints and chicken shacks, collecting experiences and intimate encounters with cooks like Helen.

Laid up this summer with a busted tibia, I read The Temptation by Julia S. Ardery, a book about Kentucky woodcarver Edgar Tolson. In the 1970s, gallerists and trained artists championed him for his religious-themed work and for the ways his art spanned aesthetic and class divides. Among the sentences I underlined was this one, in which Ardery quotes Eugene Metcalf: Folk art objects “preserve and make available to modern society a residue of bygone, yet treasured cultural meanings which Americans feared they had lost forever.” Modern people, Ardery argues, “build identities from cultural shards in which they have recognized some facet of themselves.”

I would amplify her insights to say that we humans often craft identities from cultural traits we want to model. And Southerners often reach into the recent past for inspiration. Scott Blackwell, a folk art collector and craft distiller in Charleston, South Carolina, said something similar when we recently spoke. He referred to the quest for folk art or folk food as a want to witness, among people who lack something in their lives. (His point was existential, not religious.) “It’s like you want to see firsthand something you missed out on, or something you lost, or something you wouldn’t otherwise get to see,” he told me.

A friend once told Blackwell that what folk artists had, and what he lacked, was “flow”—which is to say, total absorption in process, a state that can deliver a better understanding of purpose. To meet and collect a folk artist like Howard Finster or Mose Tolliver as Blackwell did in the 1980s, or Hewell or Meaders as I did in the 1990s, was to come face to face with people who seemed to put genuine passion into their work and derive abiding satisfaction from what they produced. In the Reagan era, and in its aftermath, when tax and policy changes drove new class divides, encounters that bridged such differences proved scarce.

Drive an hour west from our house, and on the far side of a ridge on the other side of the city of Marks, the land goes griddle-flat and the sky yawns open. The Mississippi Delta, which historian James Cobb has called “the South’s South,” is rich in folk art and folk food. There, a Sunflower food store in Yazoo City once staged occasional piano performances in the frozen foods section, and friends now tout the Midtown Laundromat in Leland, set in an old gas station, said to serve the best grits and eggs in three counties.

As a native of a region that the rest of America has long considered “the other,” I’m attuned to the hurtful dichotomy embedded in other-side-of-the-tracks descriptors. And, as a white man who writes about a field in which black women and men have long defined excellence, I recognize the taint of privilege on perspective.

This isn’t a kink. Or a co-opt. Instead, this want for folk experiences has roots in my friend Scott Blackwell’s observation about witness. In a moment when most encounters are somehow mediated by virtual-reality augments, GPS-enabled wayfinding, and thickets of digitized images and text, collectors like Scott and myself long for experiences that come without veils. We collect exchanges unadulterated by artifice.

Joints and shacks offer witness to the environments where design and operation incongruities like I sometimes glimpse in the Delta often bespeak honesty. The creative responses of that grocery store manager and that breakfast joint operator confirm that humans are at the helm in such spaces, singular and complicated souls capable of responding to circumstance and necessity with brilliance.

The age and provenance of these sites are less important than environment and people. I was reminded of that during a recent lunch at Zaap, a 2016-vintage Thai restaurant tucked in a gas station at the old Molly Barr three-way stop here in Oxford.

Rasita Palawan works solo at the rear of a dropped-ceiling, fluorescent tube–lit rectangle that previously housed an international market. Along the far wall, a glass-fronted case displays ceramic bear figurines, many wearing bonnets. On the counter, alongside the register and a golden maneki-neko, right paw raised in a seeming power salute, stands a stack of plastic-wrapped Uncle Wally’s brand chocolate-chip muffins.

Through the pass, I watch Rasita cut the eyes from fruit for pineapple fried rice, wok-cook noodles for pad see ew, and chop half-moons from sweet potatoes for massaman curry. Her place, which faces a gas pump island where mud-splattered pickup trucks jockey for fill-ups and stands catercorner from a coin-operated laundry, telegraphs the sort of incongruities those Delta joints promise, and the sort of intimacy that Helen’s delivers—though she doesn’t have to contend with that barbecue smog or those two barely contained fires.

When I step to the counter to place an order, I glimpse Rasita, alone in the kitchen, one hand seemingly forever on the wok. As much as I crave her massaman curry, and delight in the rich trail of coconut milk that skids across the surface, I recognize that, like Helen, her greatest gift is unmediated attention to her art. Here, I bear witness to a mom-and-pop, run by a mom named Rasita, who mothers a daughter named Vanessa and a hive of regulars. At her twenty-first-century joint, I seek and find solace and pleasure while dining on folk foods.