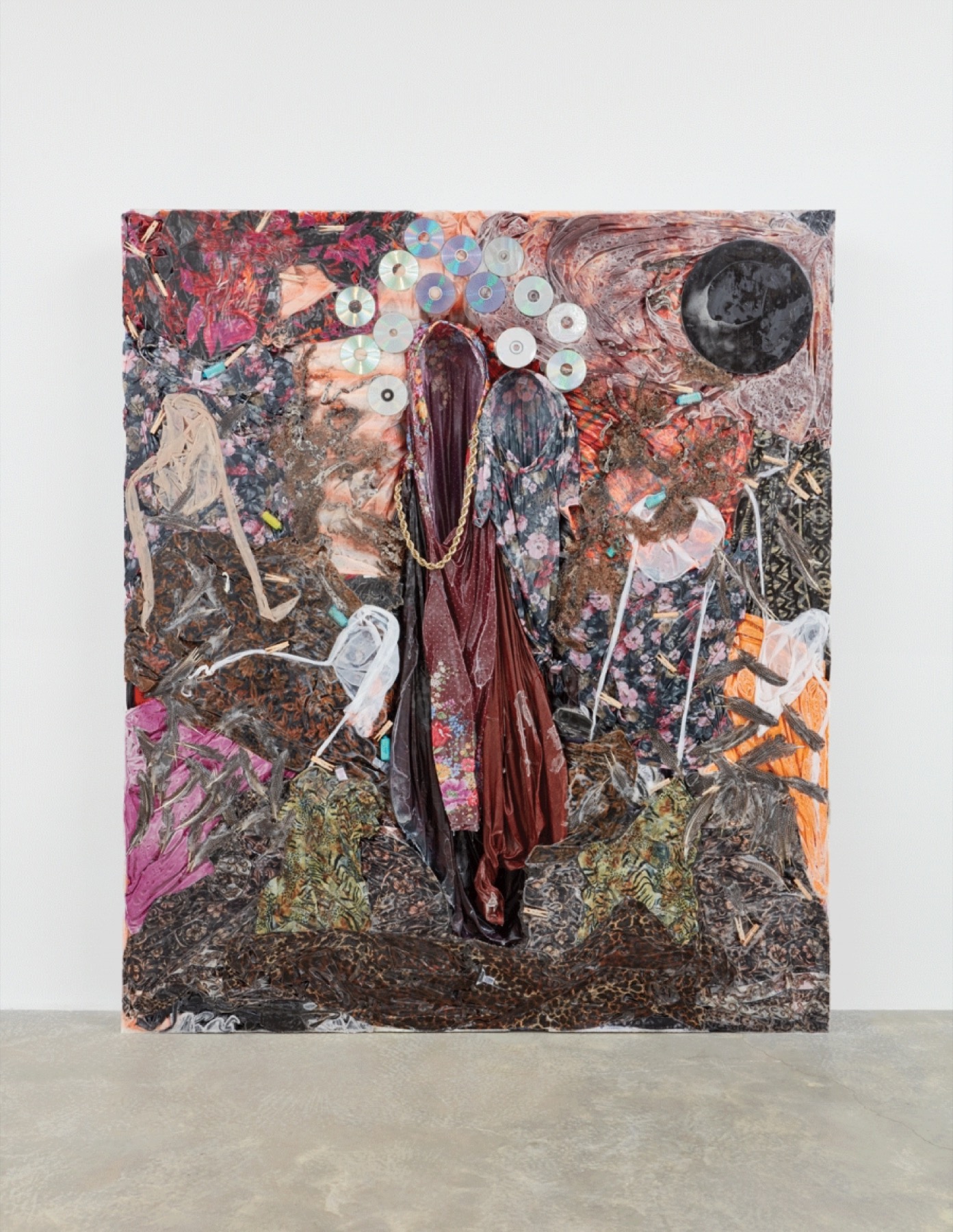 "Queen of the Night" (2018), by Kevin Beasley. Courtesy the artist and Casey Kaplan, New York

“The best of friends are sure to part one day.”
I can’t remember who said it but it’s true. I wish
the little church next door was there in person
so I could hear them singing. I really do.
I took my light body out to see and marveled
at the white clapboard and the door. The red
shingle roof’s covered with moss since no
one’s here to see it. Dust to dust. Or shingle to
moss. The chimney’s leaning towards the ground.
We didn’t know if they would like us, me
and Angeline. Little church next door in
North Carolina. Pentecostal. I invited the pastor
and his wife to tea. Like my grandmother taught me.
Turns out we like each other very much.
Randall, I was supposed to write another poem.
But let’s be honest we know I haven’t written
in two years. Or maybe more. I’ve been trying.
I’ve been taking the bus and listening to Jessye
Norman. This is where I’m supposed to acknowledge
the pandemic. And how long it’s been
since I’ve ridden the bus. Two friends
have died in the last three weeks and neither
one from COVID. What a stupid sounding
word to cram into a poem. One time my
grandfather told me how Jessye Norman
sang so well that all the cast behind her
was crying in…was it Vienna? I was really
young. He used to drive me on the tractor
while we listened to her singing on the outdoor
speakers and I’d think how nice it would be
to be so good at something you’d make
everyone stand still and cry. For joy. For
wonder. I’ve been trying what seems my
whole life since I stopped writing to describe
the feeling of waking up in the darkness
to the feeling of my grandmother’s mink
coat tickling my cheek. Her leaning down
to kiss me after her four-hour drive home
from the opera. You would not tell me, Think
about the minks. Though we would of course
know about the minks. Time passes. If I said
she smelled like Oscar de la Renta you’d know
just what I mean. And I could tell you how I
sat behind my grandfather on the tractor
listening to Les Troyens and you’d know
just what I mean. I’d say, “What is happening now?”
at the top of my lungs. Not knowing French.
And my grandfather would say, “Everyone’s dead
but the ushers.” Or: “Things are going from bad
to worse.” His voice rising over the engine. Which he’d
cut at just the right moment so we could sit
in the stillness and listen to her. Still alive.
“Cassandra on the wall.” He’d say. And I’d say,
“What’s that?” And he’d say, “That’s when
no one will listen.” The smell of late autumn
grass in my nostrils. I’d rest my head on his
back. It must have been a replay or a recording
because she sang that in winter. Or maybe
it’s been so long I just don’t remember right
at all. I used to sit on the bus and listen
to Jessye Norman before the world got sick.
But the world’s always been sick. As long
as I’ve known it, I mean. I texted, “Do you
know when she sings that song, ‘The Summer
Knows’?” And you said, “I do.” I’d wait
up as long as I could for her to come up
and kiss me. But I was always surprised.
Little minks. Horrible. But also. I’d do
anything. Literally anything to feel my grandmother
kiss me again. I’d ask, “Was she wonderful?”
And she’d say, “We’ll tell you in the morning.”
I miss everyone and feel so lonely it’s
like an empty opera house inside me.
Like all the chandeliers just shattered
on the floor. I figured I’d just speak plainly.
It’s time to dress for fall.

Gabrielle Calvocoressi is the author of Rocket Fantastic and other books of poems. They live in Old East Durham, North Carolina, and work at UNC Chapel Hill. Rigorous compassion is at the center of their practice. It has been the honor of their life to know Randall Kenan.