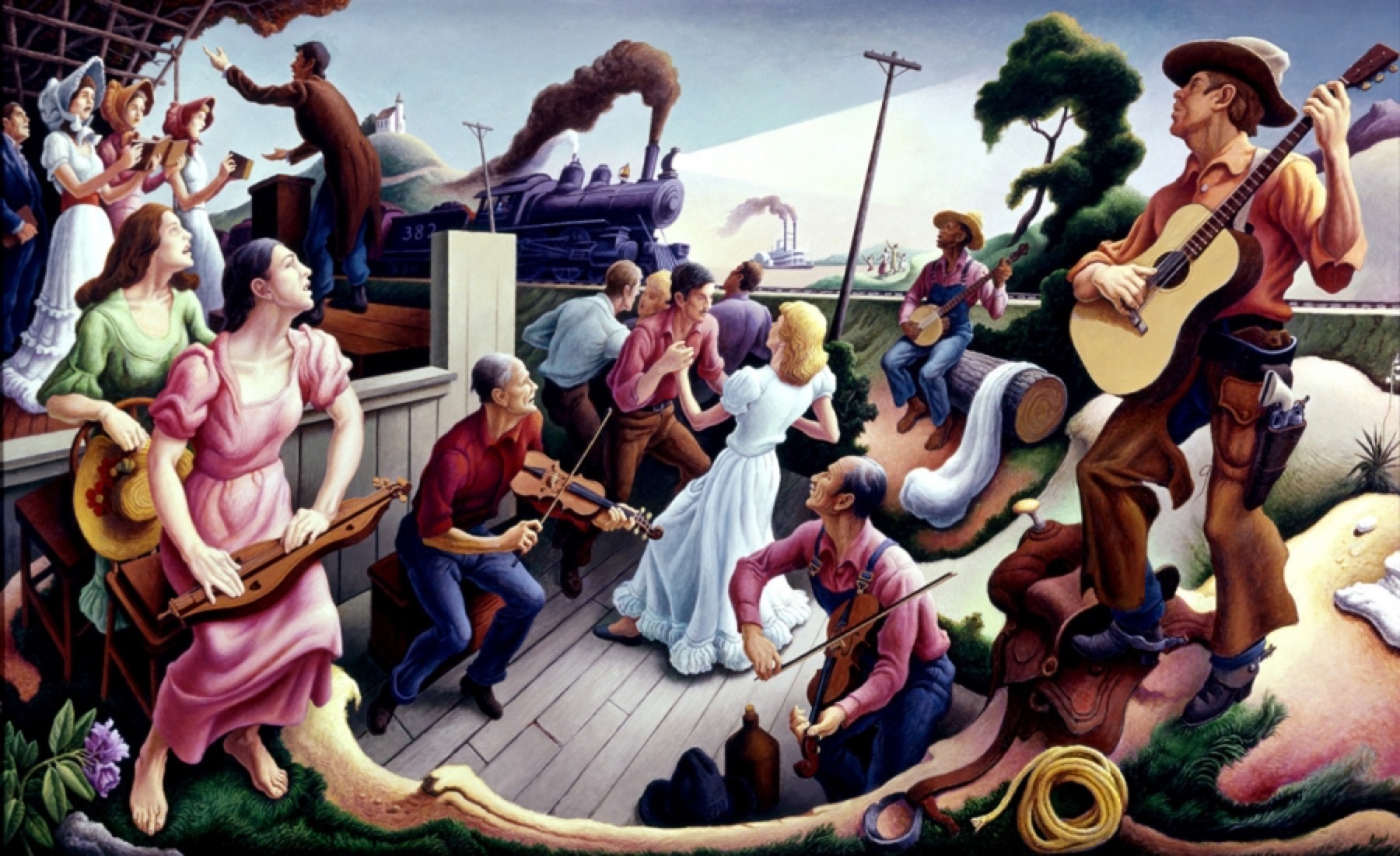 Just a few miles away from the growing Nashville skyline, in a two-story barn near Ashland City, where colanders and skillets and long clusters of garlic hang from the ceiling in an outdoor kitchen, the aroma of citronella floats through the August evening. This weekend is the annual tomato festival at the Bells Bend Neighborhood Farm, and the farmers lay out an all-you-can-eat buffet of the many varieties of heirloom tomatoes grown there: Cherokee greens, Cherokee purples, zebras, Japanese black trifeles, Ozark pinks, Pruden’s purples, and best of all, sungolds, which are small and firm tomatoes that taste warm and almost salty, like they were plucked from the vine on a hot afternoon just moments before they made it to this table. And amid all this sweet bounty: a square dance.

Night falls and I make my way to the stage in front of the barn and the makeshift dance floor, really no more than a large square of gravel and dust—there is no platform, no cover if it starts to rain. At some point in the evening the lights went out, but I can still make out the fiddle players and the guy holding a banjo, and in front of them stands a tall man in his twenties who goes by the name of T-Claw. He wears a green shirt and a baseball cap; a carabiner with a set of keys hangs off the back of his long shorts. T-Claw swigs from a growler from the local brewery. A few times on this clear night, during the rare moments when I’m not dancing with everyone else, I step back and watch him while he joyfully closes his eyes as he raises his chin just a little and calls out, croons, pleads sweetly into the microphone: Circle to the lefffft . . .

But right this second he needs something. The square dance is almost over, and a guy with a beard has jumped on the stage and grabbed a stringed instrument of indeterminate make; it’s too hard to see what’s going on, but I can hear whispering among the musicians.

“Does anyone have a guitar pick?” T-Claw yells out to the crowd of people on the gravel, most of us in our twenties and thirties, though there are older dancers, too, like the man with the long white hair and glasses and bare feet, a hillbilly-hippy-skinny Santa Claus fondly known around here as the Barefoot Farmer. Nobody comes forward with a guitar pick. We’re all too drunk or just not paying attention. It’s Saturday, and it feels so good out here in the country. Someone jokes about going to Prince’s Hot Chicken later, and we’re mulling it over, thinking about making it that kind of night.

“Somebody’s got to have a guitar pick,” T-Claw laments. “This is Nashville fucking Tennessee.”

The knowing laughs from the crowd remind me of the time when I ran into a starring cast member from the Nashville TV show at a square dance at Cannery Ballroom, a dissonant moment when the Nashville of the popular imagination coincided with the reality of actually living there, when something nostalgic and traditional felt suddenly cool and a little produced, and I became aware of the photobooth in the back of the dancehall, of how hip Nashville had become.

But the moment passes. There aren’t any photobooths out here at the farm, and anyway the dances at Bells Bend seem more authentic and earthy than those held at rock clubs. A pick eventually appears, and the band starts playing a tune. We stomp our feet and clap our hands. T-Claw tells us we’re doing it wrong, we’re not clapping to the right beat, so he shows us the way and this time we do it right. We circle to the left. My partner is a woman on this particular dance—I’m playing the masculine role in this couple—and I think of something T-Claw said a couple hours before, when we first came onto the dance floor: “It’s not what part you have; it’s what part you play.” And something else, advice that I could stand to follow: “Talking is cool; holding hands is better.” Also: “Standing is cool, dancing is better.” That was early on, when the whole crowd had formed a large circle in front of the stage. We raised our arms, moved forward as a single mass, let out a whoop, and I stumbled over a child’s lost flip-flop in the dust.

Now I focus my attention on my partner, holding her tight, my left hand on the small of her back as T-Claw calls out, “Swing your honey, swing your beau.” We’re sweaty and we spin as instructed. “Lady ’round the gent but the gent don’t go!”

Like most of my friends, I square-danced for the first time at school, in music class or maybe it was PE. I vaguely remember the scratchy voice recording telling us to do-si-do, and I clearly recall the mortification of being an unusually tall girl forced to pair up with much shorter boys for organized hand-holding. The only thing worse was junior cotillion at the YWCA a few years later—a series of a half dozen annual dances from sixth to ninth grade—when the horror of choreographed dancing with boys was compounded by the inevitable arguments with my mother in the dressing room at Dillard’s, where we sought out age-appropriate “semi-formal” dancewear, including nude pantyhose, little white gloves, and cocktail dresses that didn’t hang too short on my very long legs.

Maybe I like group dancing now because I disliked it so much in my youth. At those dances, you had to beg for a partner—forget wooing the boys with your wit. But here, in the dark on the gravel, you need only wave your hand if you’re lacking a body in your square, then a stranger appears, ready to bow to his partner. There’s a lot of bowing at a square dance, many expressions of gratitude. (“How do you do?” asks a partner. “Fine, thank you.”) In a community-style square dance we’re all in it together, T-Claw tells me. “If the dancers aren’t feeling it, if the caller’s not doing it right, if the band’s not locked in tight, or if the sound system’s off or the venue has hot beer or whatever, it doesn’t feel quite right.”

T-Claw learned to call squares when he was a student at Evergreen State College in Olympia, Washington, and he went to the 2007 Dare to Be Square workshop—sort of a Square Dancing 101—taught by the late Bill Martin, a beloved caller and leader of the modern square dance revival. A Nashville native, T-Claw never liked country music, but he learned the banjo and the fiddle when he moved out West. He got interested in the old-time sound, and that led him to calling. His friends hosted an acoustic punk show by the inlet under the Fourth Avenue Bridge in Olympia, and that’s where T-Claw called his first dance. Then he called one on a back porch in Nashville’s Inglewood neighborhood with his grandma in attendance, when it was 100 degrees outside at 10 p.m., on a night that ended when he got arrested for sneaking into a private swimming pool.

After the tomato celebration, T-Claw says he’s moving to Denver with his girlfriend, whom he met at a square dance, so that she can study contemplative psychotherapy. T-Claw doesn’t really know about the square dance scene in Colorado, but he knows he’ll find a band and a venue and start a regular dance. Square dancing is T-Claw’s passion, and he sees his role as that of an organizer as much as a caller. “Wherever I end up living I definitely want there to be a dance,” he says. “It’s a sign of a healthy community.”

“Think about what your average American’s experience is like in day-to-day life,” he explains, when I prod him about the appeal of traditional square dancing. “Most of their entertainment is passive. You go to a concert and sit and watch and accept the music, and feed off the music, or whatever. You watch TV. But how often do you hold hands with strangers? How often do you actually dance? How often do you let go and just be goofy and mess up around your friends and strangers? How often, in a dating and singles world, are the icebreakers acceptable and consensual touch?”

When you’re in the middle of a square dance and the calls are coming loud and fast, it often feels like a free-for-all. And it usually is, since most folks haven’t had the opportunity to practice. At every dance I attend, I end up paired with a stranger who will confess his ignorance sheepishly and then scramble during the less obviously descriptive calls like “take a little peek” or “birdie in the cage.” But eventually the newbie will get it—he’ll move with the flow of the more advanced dancers and, I imagine, let his mind relax as he skips among the bodies. Square dancing reminds me of flying through the air on one of those tall swing rides at the state fair—you feel loose, unencumbered, and happy. That’s what it feels like to “swing your partner high and low.” The first-time dancer soon realizes that the stakes aren’t very high out there on the dance floor, that nobody cares if you do it right or confuse the calls; if you go to old-time jam sessions or if you couldn’t play a washboard if it hit you in the head; if you’re tall or short or barefoot. You bow to your partner, you circle to the left. Don’t sweat it if you go the wrong way. Then wait a few beats until T-Claw, filled with beer and good cheer, a man of strong lungs and a lover of American traditional square dancing, offers another chance for folks who are still trying to get the hang of it: “Stand square, stay right there, we’re going to try it again.”