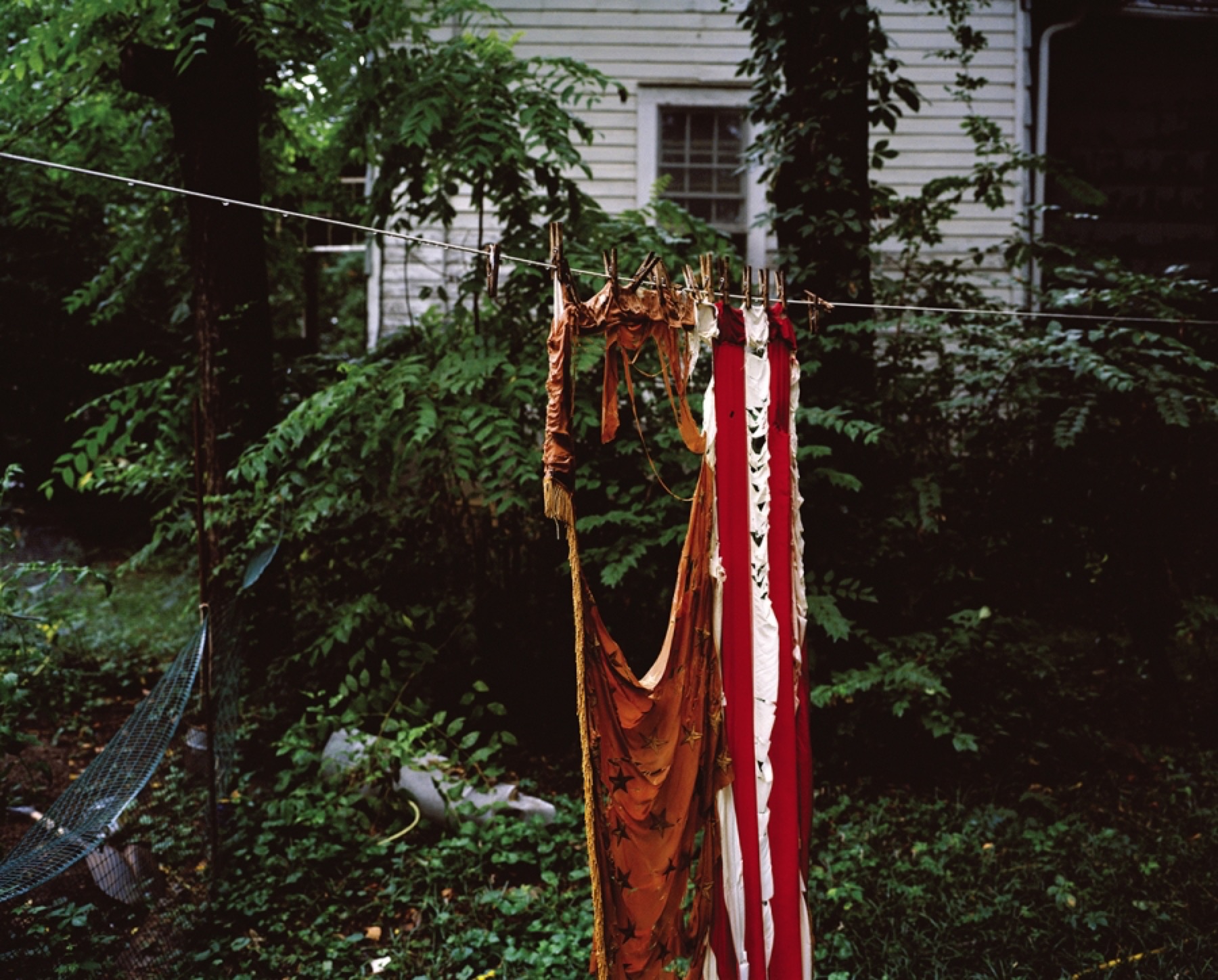 The old train depot was once everything to the town. Decades ago, people in McGehee, Arkansas, used to love coming downtown just to see who might be getting on and off the trains headed to Monroe or Little Rock, folks out seeing the world. “That was a special social event,” recalls Mayor Jack May, who, at age seventy-four, is old enough to remember. “It was the social center of the city.”

Last spring, the station was again at the center of things. The old depot—long shuttered, abandoned by the railroad—reopened as something totally different: a small museum commemorating the two Japanese internment camps built just outside McGehee in the post-Pearl Harbor hysteria of the early 1940s. For decades, townsfolk refused to even mention the camps, called Rohwer and Jerome. The secret was so well kept in town that many born after World War II had no idea the sprawling camps, imprisoning nearly 17,000 innocent Japanese Americans, had even existed.

But now, with the dedication of the new museum in the old depot, there was a reckoning—and a party. Mayor May gave a speech from a stage, as did other officials. The McGehee High School marching band—go Owls, Owl Pride!—was on hand to play patriotic tunes. The local Boy Scouts formed a color guard. And there was a fine lunch spread inside the depot’s north building: chicken salad on croissants, with fruit and dessert for invited guests.

A fierce wind was blowing that day across the Mississippi Delta, but otherwise the weather was perfect: blue skies and sunny. About five hundred people attended—and, if you ask folks about it, they’ll say it felt like the whole town was there. Everyone, that is, except for the most outspoken advocate of all, the woman who’d been pushing for decades to recognize the Japanese Americans who once called Arkansas home.

Rosalie Santine Gould stayed away that day. She wasn’t there to collect the plaque presented in her honor or to hear the speeches praising her efforts. She was happy that a museum was finally opening. “I’m all for it,” she said. “I think it’s great.” But the eighty-seven-year-old farmer—and former mayor—wanted nothing to do with it. Gould won’t set foot inside the museum; she’s unable to shake the memory of how the town, her friends and neighbors, turned on her twenty-five years ago for having the gall to suggest that they embrace the Japanese Americans who once lived behind the barbed wire in their backyard.

“I’m sorry,” she told me, defiant, when I visited McGehee late last year. “I just cannot do it. I mean, I just will not do it. That’s all there is to it. Sorry.”

Gould loves puzzles, the bigger and harder the better. At any given time, a puzzle can be found, laid out just so, on a table in her modest, single-story home in McGehee, population 4,219. “Did you see my jigsaw puzzle?” she asked after welcoming me into her home. “I love to do them.”

They keep her mind sharp, engaged. And for decades, in town, there was no puzzle greater than this one: Despite the mammoth size of the federally built internment camps near McGehee, and the thousands of Japanese Americans housed there against their will between 1942 and 1945, few residents acknowledged their existence—or, at times, even knew about them. Mark McElroy, now a state representative, went to school in Rohwer in the same buildings that housed the internees. He ran track through the fields where the internees lived and, later, farmed soybeans on that land. Never once did he learn what had come before him. “The first piece of land I ever farmed was in that camp,” he recalled. “That shows you how educated I was.”

But McElroy was hardly alone. Gould raised three children in Rohwer, just across the railroad tracks from where the old internment camp had stood. Her daughter Vivienne Schiffer recalls playing in those fields in the 1960s, chasing fireflies at dusk, and wishing she could have played there more often. But neither she nor her mother were aware of the history around them. Rohwer was a soggy slice of Delta hemmed in by the Mississippi River and flat stretches of American nothing. What could ever have happened there? “It was the end of the earth,” Schiffer told me. “There was one way in and one way out. And most people never made that journey.”

Gould’s husband died young. A bad heart. She took over their farming business, raised their kids, never remarried, and in 1967 moved to town, to McGehee, twelve miles south. “I can’t stand to sit in the house,” she said, “and just do nothing.” So she got involved. Joined the women’s chamber of commerce, became president, started eyeing a run for mayor, and, in 1982, was asked to host a dinner for some Japanese Americans returning to Rohwer near the fortieth anniversary of the opening of the camp.

Gould, always polite, was happy to plan the event. She had just one question.

The first Japanese Americans began leaving for internment camps in the spring of 1942, effectively banished from their homes by the United States government. Norman Sagara, six years old at the time, can still recall how it played out for him: the FBI visiting his farmhouse in southern California; his older siblings translating for his parents, simple chicken ranchers; his family packing up their belongings and, then, late that summer, boarding a train. “We didn’t know where we were going,” recalls Sagara, now seventy-eight. “They wouldn’t tell us. And three days later we ended up in McGehee, Arkansas.”

The land there was hardly hospitable. Winters were cold; summers were hot. Insects were a problem, as were snakes—and locals. Many resented the amenities the Japanese enjoyed behind their guard towers: sewer systems, electricity, hospitals, and good schools—things few Delta residents had at the time. But Sagara and others were trapped at Rohwer amidst neat rows of squat barracks. “That’s all we saw,” he said. “I never saw anything else.”

Sagara has never been back—not once. But at that dinner, in 1982, Gould heard stories just like his, one after another. She agonized all night that she’d never heard such stories before. “I apologized,” she said. “I kept apologizing.” And then she invited her guests—or anyone else they knew—to call her, if they ever wanted to come back and visit.

The first phone call came a few weeks later. Families, then tour buses, then more buses. Japanese Americans began signing a guest book at her home; then they began showering her with gifts and bequeathing her items related to their time at Rohwer: artwork, journals, photos, keepsakes.

Gould took them, but only because she had a plan. She was no longer just a widow; she was the mayor of McGehee, and she wanted to build a museum to commemorate the Japanese-American experience in Arkansas. “Even the schoolchildren in our part of Arkansas don’t know anything about it,” she complained to reporters two decades ago. “I think it’s a crying shame.”

McElroy, among others, supported her. A young politician then, serving as Desha County judge, he held a meeting so Gould could present her idea. But it didn’t go well; officials and World War II veterans resisted the notion of a museum and attacked Gould personally. “They handed my head to me on a platter that day,” McElroy recalled. “And man, we had ugly letters to the editor. Rosalie actually got death threats out of that. I’ve had death threats a couple of times as judge. And, I assure you, they’re not fun.”

Gould laughed off the angry calls. “They really weren’t serious,” she said. At least once, she even recognized the voice on the phone. “He was one of my aldermen. Of course, it’s a small town. You know everybody.”

Yet when the same town finally decided in 2009 to create a museum—and then landed nearly $500,000 in federal money to renovate the old train depot and make it happen—Gould had moved on. She was donating everything she had, including $800,000 worth of materials bequeathed to her by Rohwer art teacher Jamie Vogel, to the Butler Center for Arkansas Studies in Little Rock.

It was probably the best place for her collection for many reasons. In Little Rock, it would have a larger audience and the care of archival experts. And McGehee museum organizers appreciated that. “We don’t have the funding, nor the manpower, to take care of the valuable treasures that she was given,” said Cindy Smith, a McGehee resident and chairwoman of the Arkansas State Parks, Recreation, and Travel Commission. “So for those treasures to be at the Butler Center is a great gift for the whole state of Arkansas.”

But for Gould, it was also personal. She couldn’t let go of the past and how the town had treated her—even if most of her critics had died years ago. As she sees it, it’s simple: If the town didn’t want her collection two decades ago, it wasn’t going to get it now. “There will never be anything of mine in the McGehee museum.”

The camps themselves were torn down long ago and sold off, piece by piece. Everything had to go: the mess hall tables and the butcher blocks, the doughnut cutters and the cleavers, the stoves, refrigerators, and desks, as well as 15,000 feet of garden hose and 10,000 comforters. “What You Can Buy” read the ads in the local paper, back in the mid-1940s. And buy people did, until the sites at Rohwer and Jerome were swept clean of almost any sign of what had happened there. Only one thing remains at Rohwer, and, on a cold day in late November, Gould drove me out there to see it.

“This is Rohwer,” she said as we passed the sign welcoming people to the tiny rural community with almost no population. “This is the big city. That’s my mother-in-law’s house. And that one was mine.” She paused and said it again: “This is Rohwer.”

Gould eased her car off the two-lane highway, over the railroad tracks, and down a short gravel road to a cemetery in the middle of a fallow cornfield. There are a few large memorials here and, behind them, the graves of twenty-four Japanese internees who came by train to Rohwer and never left or who were born here and never made it home. Three tombstones mark the graves of babies, given a last name, but only the first name “Infant.” “I just wonder what that baby would have grown up to be,” Gould says, lingering over one of them.

Long ago, there was an eerie quality to the cemetery, Gould believed, something unsettled about it. She could feel it, even hear it at times, she thought. But since she and others started coming out here, marking anniversaries, dedicating new memorials, and paying their respects to the dead, Gould doesn’t hear it anymore. For a long time, we just stood there in silence amid the tombstones sinking into the soil. There was no birdsong, no car traffic, no sound whatsoever except for a hard Delta wind blowing from the south. It blew across the flatlands, and through the bare branches of the cherry blossom trees, scattering leaves and clanging against a metal pole flying a tattered American flag.

Keith O’Brien is the author of Outside Shot: Big Dreams, Hard Times, and One County’s Quest for Basketball Greatness. His journalism has appeared in the New York Times Magazine and on National Public Radio. He lives in New Orleans.