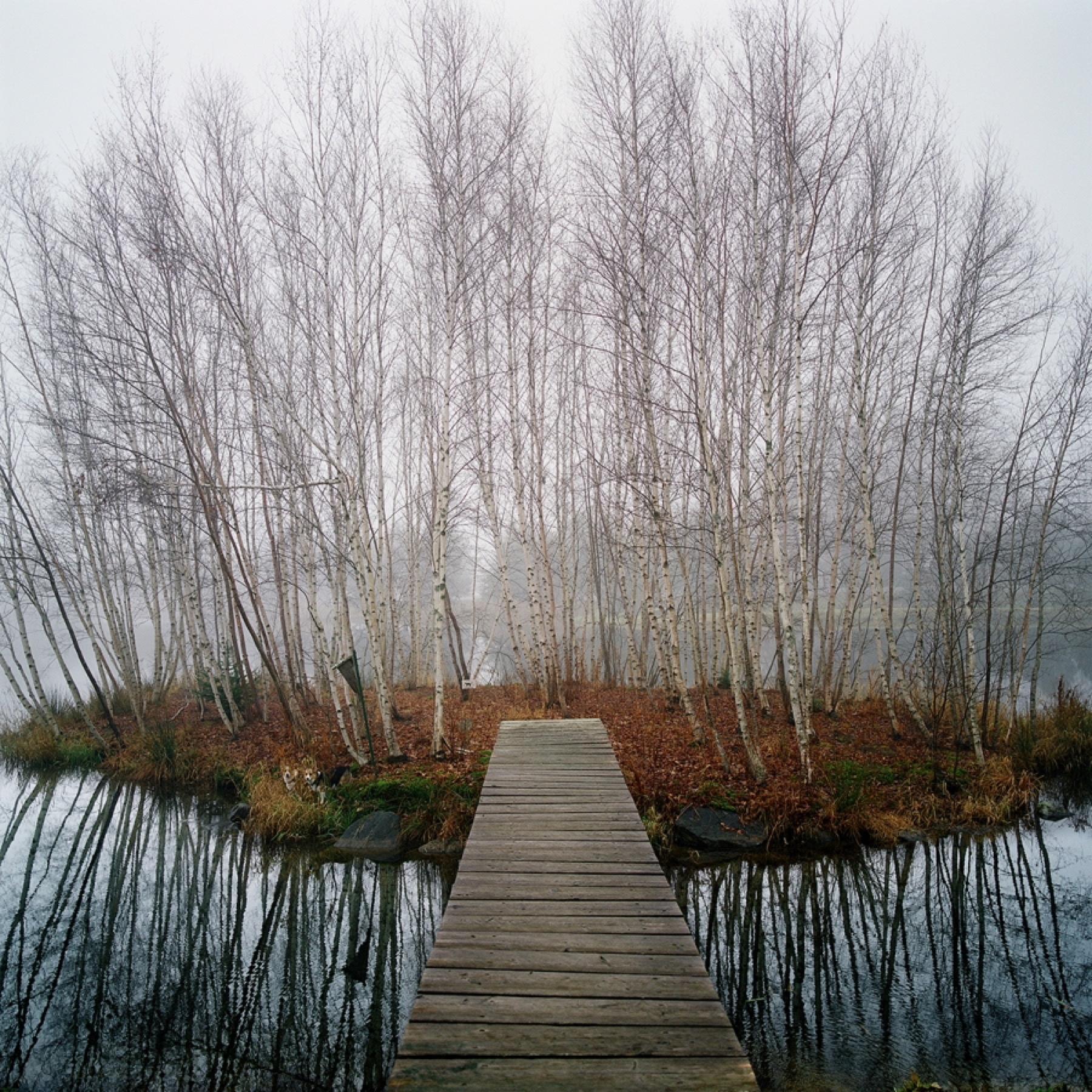 Texas Island isn’t an island, nor is it in Texas. It’s a vague peninsula around which wraps Moon Lake, an oxbow formed by an abandoned meander of the Mississippi River, twenty miles north of Clarksdale off Highway 61, near the hamlet of Lula. Folklorist Alan Lomax visited Texas Island twice, once in 1941, and again in August 1942, toward the end of his second summer documenting black vernacular song in Coahoma County, in the heart of the Delta. It was under the auspices of this research trip—a collaboration between Lomax, representing the Library of Congress, and a team of African-American sociologists and musicologists from Fisk University in Nashville—that he made his famous recordings of Son House, Honeyboy Edwards, and Muddy Waters.

The hour and a half of recordings collected at Texas Island were performed by members of a small Church of God in Christ congregation on the Mohead plantation, which was home to hundreds of black tenant farmers. They made tremendous music. Ranging from unaccompanied shouts like “I’m GonnaLean On the Lord” to the sacred propulsion of “I’m Gonna Lift Up a Standard for My King,” with its hot foot-stomps and guitar accompaniment, their songs are charged with all the ecstasy and electricity that made Sanctified meetings so effective and popular. Many of the performers are unidentified, although the strongest voice to be heard on a number of the sides belongs to fifty-four-year-old Roxie Threadgill. She told Lomax she came from Knoxville, in Franklin County, Mississippi, and that many of her songs were recalled from childhood. Lomax also notated a Mrs. Johnson on the sessions, whom he later reported was Robert Johnson’s mother. That claim, however, has since been debunked.

According to Mohead family legend, Lomax came calling at the plantation’s big house to seek permission from the patriarch, Guy Telford Mohead, to make his recordings. Placing a foot up on one of the porch steps, Alan made his case to Mr. Mohead, likely explaining his Library of Congress affiliation. It’s said that G.T. then told Lomax to take his goddamn foot off the porch and his person off the property. That Alan, likely with his wife, Elizabeth, and Fisk professor Lewis Wade Jones, proceeded to surreptitiously drag his disc-recording machine into the church service (or, perhaps, that he had already done so, and was merely offering the polite tribute of a post-facto formality) is a testament to his boundless pluck. And his good luck. Somehow Lomax managed to never get himself shot.

Neither pluck nor luck—or any degree of secrecy, for that matter—was necessary for the four of us who compose the staff of the Alan Lomax Archive to visit the Mohead plantation this past October, after several heady days spent in the Mississippi Hill Country. We had gone to the Hills to donate Lomax’s original fieldwork from the region to the public libraries of Senatobia and Como. We had met dozens of family members and friends of musicians whom Alan recorded on his trips there—musicians such as Sid Hemphill, Viola James, Miles and Bob Pratcher, Otha Turner, Napoleon Strickland—and we had marched with them down Como’s Main Street behind Turner’s granddaughter Sharde Thomas, arguably the last of the Hill Country fife-blowers to learn via oral tradition, who leads the current iteration of Otha’s Rising Star Fife & Drum Band. We followed Thomas past the Mississippi Blues Trail markers erected for her grandfather and Fred McDowell (whose debut recordings were made by Lomax in 1959) to the unveiling of a new marker for Strickland, whose son and extended family had come all the way from Cleveland, Ohio, for the ceremony. A large crowd was gathered. Como’s mayor spoke. An impromptu photo session lasted twenty minutes. In the thirteen years I’ve been employed by the archive, I have never felt Lomax’s work—to say nothing of my own—resonate with so much vitality, or relevance.

A stopover in the Delta was planned between the events in the Hill Country and a Mississippi Library Association conference in Biloxi—the transition was topographical, climatic, and emotional. We arrived on a wet and waning evening at the Moon Lake home of John Mohead, G.T.’s grandson, and his wife Jenn, who had invited us for cocktails and a visit to Texas Island. Drinks were served in large styrofoam cups (from Tunica’s Southbound Pizza, of which John is a managing partner) and we were ushered into an SUV for the drive to the plantation. Even if, by the time we arrived, night hadn’t fallen, we wouldn’t have seen much evidence of the once-bustling human presence on Texas Island. John called our attention to points of interest, mainly just indicating where things were or might have been. The Sanctified church was long gone, nearly all of the tenant residences had been razed, and what out-buildings we could see through the drizzle and the dark had been left to obsolesce by the agribusiness concern now farming the land. A ghostly feral horse grazed alone by a listing barn.

John stopped the car at one of the few surviving tenant shacks: a duplex, if you will, with two rooms called “Della’s” on one side and two called “Charlie’s” on the other. Della had worked for years in the big house as a domestic, until one morning in the mid-60s when she didn’t appear at breakfast and was never heard from again. (It’s assumed she left for Chicago.) I was making short work of the ample pour in my Southbound Pizza cup and I asked if I could have a look inside. To be honest, the bourbon was stoking a heroic vision of my excavating a miraculously preserved pile of 78-rpm records (a vision I carry with me always). With a borrowed flashlight, I leapt into the fray.

Water was trickling in through Della’s long-breached roof and what was left of the floor was a riot of warped and rotten boards, ancient mounds of molded newspaper and wallpaper, bedsprings, and trash. I was counseled to use caution, but the flashlight couldn’t search for records if it was also lighting my step, and I soon brought the ball of my foot down hard on a nail. Need I mention that it was rusty? A full-body pang shot through me, and the next feeling was the fear—should I require medical attention—of being an even further inconvenience to both my hosts and my colleagues. I detached the sole of my shoe from the floorboard and hurried back through the muck and the rain to the idling SUV where zipped lips, a hankie doused with bourbon and applied to the shallow wound, and the recollection of a recent tetanus shot offered some comfort. There must still be records in there somewhere.

Our last stop on Texas Island was for John to shine the Yukon’s headlights on the porch where G.T. had exchanged words with Lomax. In the vast annals of Alan’s research trips, his time at the Mohead plantation is a footnote, but a pensive silence fell among us as we squinted through the downpour at an otherwise unremarkable set of steps. This was the only site on this great flat dark expanse where we could confidently say that Lomax had stood, but it all seemed so ineffably far away—the time, the place, the cast of characters. Our experience in the Hill Country had imparted something akin to confidence that the music, and the world that created and nurtured it, still thrived. There were sons and great-nieces and granddaughters to testify to the music’s endurance, and lift up its standard. Here it could only be imagined. The music had gone where Della and Roxie Threadgill and Mrs. Johnson had gone.

After goodbyes at Moon Lake, I drove us back to Clarksdale. My foot throbbed dully with each depression of the clutch, and the road was covered, blanketed, by tiny frogs. The soggy night had lured them—it looked like all of them—out of their holes, and I was unnerved by the abject massacre committed with every revolution of the wheels. After a few miles, however, mellowed by a contemporary r&b station broadcasting from Friars Point, I got used to it. The frogs became mere streaks across the pavement, darting this way and that as consistently as the white lines slid past us. I had settled into this sanguine perspective when, from the upper right of the windshield, a huge, bright white form descended, fast, like a lantern being hurled from a branch high above, and smashed into the front passenger-side wheel. It was an owl, engorged on frogs, diving for more. It made an appalling thud, my colleagues screamed, I swore, and then I felt sick. I don’t consider myself susceptible to that goofy, ersatz brand of Mississippi Delta hoodoo—crossroads and all the rest—but this felt like the worst kind of juju.

We spent that night at the Shack-Up Inn, a patchwork of former sharecroppers’ shacks reassembled and scattered along both sides of Highway 49, just south of Clarksdale. After cleaning my foot with more bourbon, I hit the light and lay in bed for a while. An air conditioner that couldn’t be turned off droned above my head. I wondered if my particular shack might have once housed the prayer meetings of the Church of God in Christ congregation of Texas Island. I heard Roxie Threadgill singing: “You got to reap your own damnation / you got to reap it for yourself.”

When I slept, I dreamt of frogs, owls, and nails.