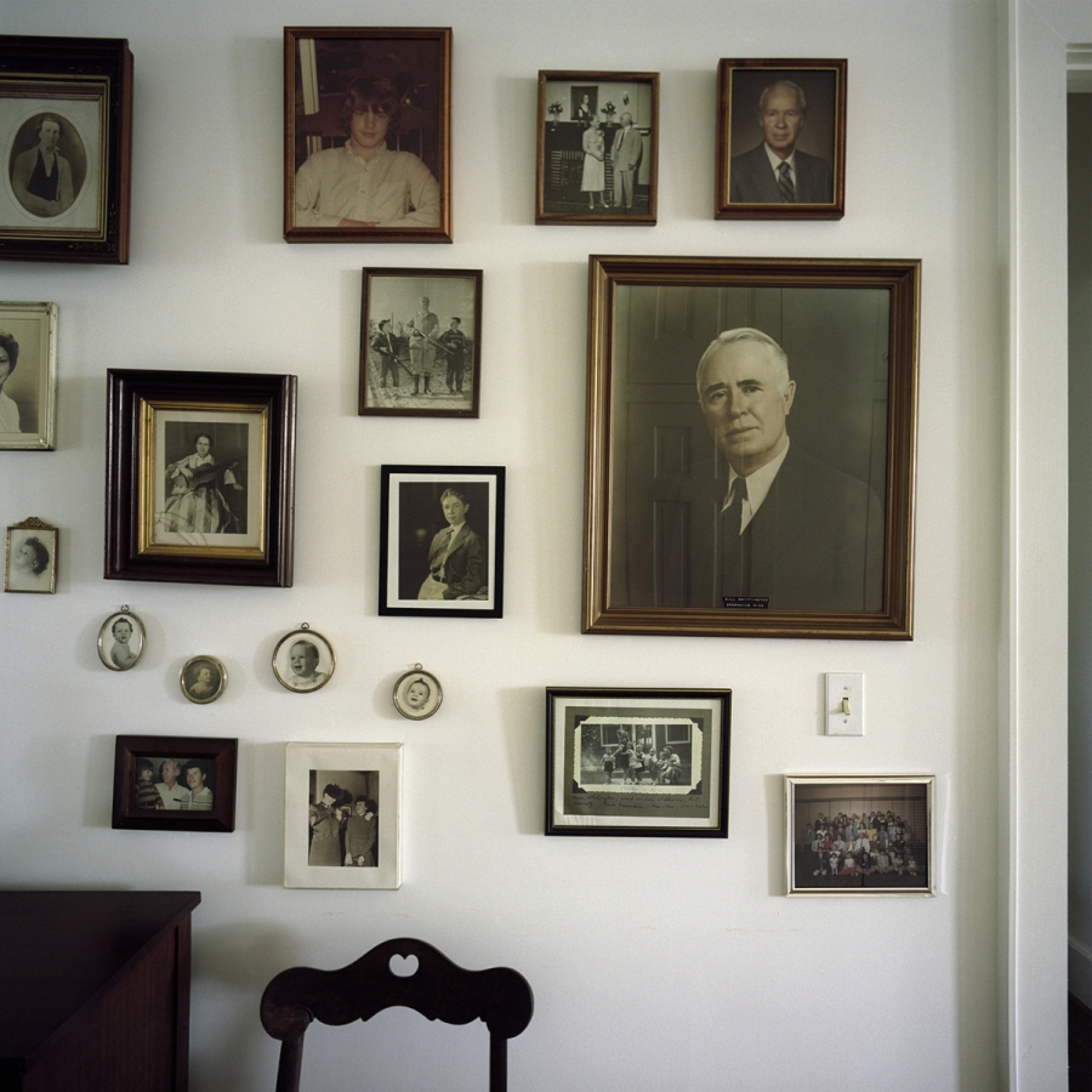 "Buckhorn" from the series In Cotton (2011) by Kathleen Robbins

The Stories of Elizabeth Spencer

Of all the pitiless opinions set down about family, it’s hard to beat this snarl by August Strindberg, a sentence which appears early in the first volume of his novelized memoir, The Son of a Servant, one of the bitterest condemnations of family ever written: “Family! thou art the home of all social evil, a charitable institution for comfortable women, an anchorage for house-fathers, and a hell for children.” Strindberg mobilizes those words within the mind of his childhood stand-in, Johan, who immediately before has dubbed the home a place “where wills are broken by tyranny, and self-respect killed by narrow egoism.” Nowhere in Strindberg will you find an earnest encomium for family life—his favorite English novelist was the author of David Copperfield—but that’s true for the lion’s share of literature. Family is the poisoned womb from which we are shoved into the world, inadequate and aching. In the preface to his play Getting Married, G. B. Shaw, with characteristic Shavian bile, sniped that home life “is no more natural to us than a cage is natural to a cockatoo.” I hasten to add that Getting Married also happens to be the title of Strindberg’s 1884 collection of short fiction. In its repudiation of family, then, literature is something of a family tree.

If the plangent examples of Strindberg and Shaw sound out of place beside the seemingly low-decibel short fiction of Elizabeth Spencer, consider for a moment that Spencer, ninety-two years old and the author of eighteen books, specialized in W. B. Yeats at Vanderbilt in the early 1940s, where her teacher was none other than Donald Davidson and where Allen Tate was in frequent attendance. Her 1998 memoir, Landscapes of the Heart, commences and crescendos as a love song to literature, to the nourishing pleasure and pitch of serious reading (Poe, Kipling, Faulkner). Eudora Welty was a cherished admirer and confidant; she wrote the touching foreword to the 1981 volume The Stories of Elizabeth Spencer. Consider, in other words, that for the past seven decades—her first novel, Fire in the Morning, was published in 1948—Spencer has been storytelling in full frontal view of Literature, in tandem with a cast of immortals.

Spencer might not share Strindberg’s fanged animosity for family, but her work confronts the reality that the face of conflict often wears the mask of kin. Few Americans have written so insistently and piercingly about the paradox of family, the myriad ways in which the force that sustains is also the force that erodes. Her new story collection, Starting Over—her first book in thirteen years—continues her peerless articulation of the intimate rhythms in Southern existence. Spencer terrain is the Welty terrain of  “Why I Live at the P.O.” and The Optimist’s Daughter, but while one detects strains of cynicism and mythic pedigree in Welty’s treatment of family—Ms. Welty has always had more in common with Ms. O’Connor than is typically acknowledged—Spencer in much of her fiction endorses a fought-for capitulation to the permanence of family, accenting its potential benevolence over its inevitable attrition.

I ought to stress “in her fiction” because “in her life” is a separate matter altogether. The rigor of Southern propriety in her Mississippi town had a shackling effect on a young woman—born in 1921—who pulsed with sedition and artistic seeing, who understood that the white and black weft of Southern life rather odiously rewarded one pigment over another. Her third novel, The Voice at the Back Door, published in 1956, contains a punishing truthfulness about race in the South (and bear in mind that although 1956 was one year after O’Connor’s singular story “The Artificial Nigger” appeared in the Kenyon Review, it was four years before Harper Lee would give the world To Kill a Mockingbird). In Landscapes of the Heart, Spencer dubs her childhood “a high-security prison, guards on the watch-towers”: those guards were the exacting Presbyterians she called Father and Mother. The throbbing essence of every prisoner is the will to jailbreak, and Spencer left Mississippi in 1953 on a Guggenheim, living first in Italy and then Montreal. Her published work added to the already numerous miles between her and her family. When she eventually returned to the South in 1986, she chose Chapel Hill, North Carolina, over anywhere in Mississippi.

In Starting Over, Spencer marshals the manifold traits that generations of readers have come to expect from her brand of excellence: the elegant simplicity of the sentences, that allegro pacing of the narratives, the percipience of one whose vista reaches into both flesh and spirit, the ear of one who truly hears the cadences of speech, and those impactful subtleties of character. More than ever before, the stories here expose the consequences of a sudden infringement by a stray family member. Take the Sartrean wisdom of hell being other people and make it more familial: hell is that distant cousin who shows up to filch your child’s affection and disrupt your marriage; or the estranged son who moves in unannounced and causes strife among an entire battalion of your stepchildren; or your invalid mother, bedfast but demanding and much too slow to die.

“Home” is always a kind of mirage, blurred at the boundaries of memory and incapable of ever being what you recall. As Thomas Wolfe’s titles have it, you can “look homeward, angel” but “you can’t go home again.” Wolfe’s childhood house in Asheville, North Carolina, makes a cameo in “Return Trip,” the opening story of Starting Over. Patricia has interrupted a summer vacation with her husband and driven from the Carolina mountains to retrieve her grief-pummeled cousin, Edward, newly arrived from California because his wife has died and he’s decided to reconnect with kin. At Edward’s odd request, they sit in front of Wolfe’s house, half of which is newly defaced by fire:

She was wondering what little bit Thomas Wolfe had to offer.

“Didn’t Wolfe have to put up with an awful family?” Edward recalled. “I wonder how he stood it. We were luckier than that.”

“Are we getting into family?” She was tentative.

One might point out here that we share germs and maladies as well, but that doesn’t mean we must laud them, that they provide imperturbable bonds. The emblem of Wolfe’s charred family home intrudes just enough to be effective. Edward comments on having read Wolfe when he was younger, and then tells Patricia, “You learn something from other people’s bad times.” She asks, “Like what?” and he replies, “How to get through your own.” That’s a shining endorsement of literature, to be sure—if literature lacks the magic to make us better people it can at least help teach us how better to recognize beauty and pain. Patricia is mildly skeptical about the motives for Edward’s arrival, and by story’s end we’ll be confronted by the possibility that Edward, not Patricia’s husband, is the father of her grown son.

In Spencer country, if someone isn’t distracted by her own family, she’s distracted by someone else’s. Eva Rooke, the protagonist of “On the Hill,” is a fine study of the juncture at which distraction morphs into obsession: a dashing couple, Barry and Jan Daugherty, comes to town, throws Gatsbyesque soirees, perhaps dabbles in the occult, and ritually abuses their young child. Eva Rooke becomes tantalized by the sinister enigma of it all. We’re obsessed with other lives only when we don’t have adequate substance in our own, and after the Daughertys move away, Eva’s husband says to her, “What’s gone is gone . . . What’s real remains.” It’s a curious inversion, what’s real remains rather than what remains is real, suggesting quite incorrectly that the constitution of the authentic requires it to stay with us—family, friendship, devotion—while only the fabricated will take flight. Eva’s husband offers her that false inversion as a form of consolation: precisely what loved ones do.

This issue concerning the proper amount of devotion unfurls in “Sightings,” when Mason Everett’s teenage daughter, Tabitha, shows up at his house one evening: “It’s true they never saw much of each other. Maybe it was a shame.” There you have it, Mason’s moral coordinates in five common words: maybe it was a shame. Tabitha comes seeking refuge from her bitch of a mother and her mother’s new beau, a pharisaical and porcine prig (think Rush Limbaugh). What begins as a possible hellscape for Mason—he clearly values his daughter-less life—ends with him surprised by a newfangled love for the girl.

In “The Wedding Visitor,” family devotion is yanked taut and almost snaps when Rob Ellis ventures to Mississippi for his cousin Norma’s wedding: still uneasily in love with Norma from his youth, Rob learns that the groom has stolen cash to pay for their honeymoon, and Rob makes it his mission to set things right, because Norma is “such a candidate for happiness.” It’s discourteous, downright nonfamilial to torpedo a wedding based on one’s own unruly emotions or the knowledge that the groom is a louse. Yet again it falls to a family member to augment self-deception, to help provide the sustenance for delusion: Norma’s only real candidacy is for disappointment and ennui, for a life spent looking back.

And that’s the alternate theme wending through this collection, as it wends through much of Spencer’s work, and indeed through much of Southern literature—the one theme inextricable from family: that almighty potency of the past, its writhing reality in the present.

In Spencer’s oeuvre you come upon sentences that make you sit up a little straighter in your chair. These are the closing lines from her unstoppably charming, early-period story called “A Southern Landscape”: “There have got to be some things you can count on, would be an ordinary way to put it. I’d rather say that I feel the need of a land, of a sure terrain, of a sort of permanent landscape of the heart.” And this from another early-period story called “First Dark”: “But it scarcely ever happens, even in Richton, that one is able to see the precise moment when fact becomes faith, when life turns into legend, and people start to bend their finest loyalties to make themselves bemused custodians of the grave.” Starting Over contains pithy gems you’ll wish to recall—“With affection you forgot annoyance”; “There must be such a thing as a truthful liar”—as well as faultlessly modulated sentences you’ll wish to write: “He passed the orange-colored monsters of the road construction, towering over the old hills now crumbled, shaping into a highway that would sweep thoughtlessly past the little town of his youth.”

Near the start of “The Wedding Visitor,” one cousin says, “Family is all we have, like them or not,” and if that isn’t true, it’s at least true before it’s false. In her foreword to The Stories of Elizabeth Spencer, Welty remarks that Southern writers “thrive in the thick of family life. They comprehend ‘identity’ because it’s unavoidable.” About Spencer’s own identity, Welty observes, “This free spirit, anybody could tell, would do what she intended to do about writing.” And so she has. Every now and again the empty cosmos gets it right: that we have a healthy Spencer still witnessing at the age of ninety-two is a fact of flesh that feels more like a gift of grace, and Starting Over is a numinous addition to the catalog of an American treasure.

William Giraldi is the author of the novel Busy Monsters. His latest novel, Hold the Dark, was published by Norton in fall 2014. He is fiction editor of the journal AGNI at Boston University.