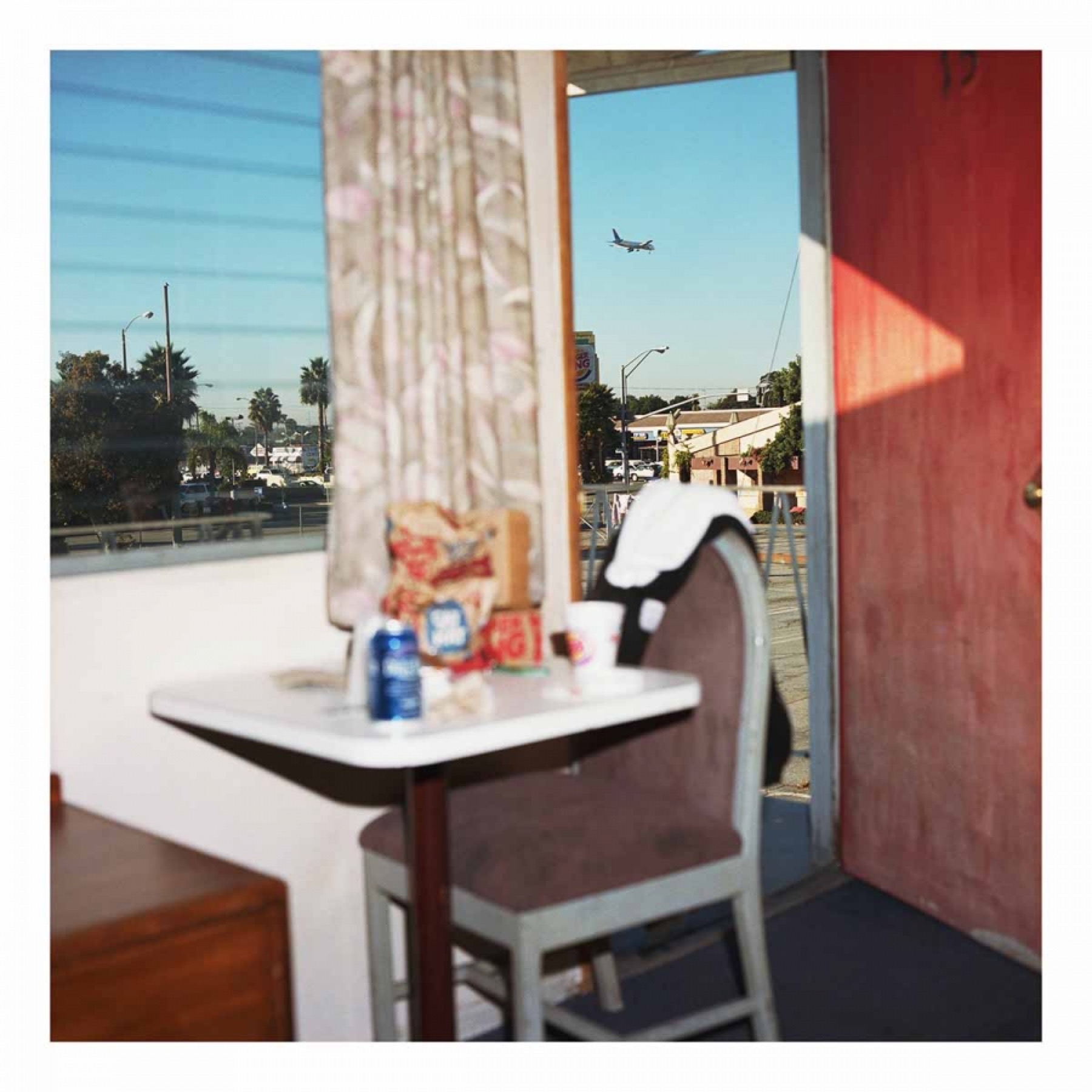 Los Angeles. Four weeks into book tour. I’ve hit the wall, lads. Eleven straight hours of sleep and eighty-two ounces of caffeine and a B12 shot from an alleged pharmacy and I’m still exhausted. Still madly editing the short story manuscript until a ninety-minute car ride to my event, followed by an early morning flight to Salt Lake. I’m still traumatized by those hookers banging on my door at 3 a.m. in San Francisco two nights ago. My belief is that the guy who showed up at my hotel door with the live goldfish sent them. Maybe it was some kind of code. You let the guy put the goldfish in your room means send hookers at 3 a.m.

Is Nancy Reagan dead? I think I just saw her.

I got lost in the hotel this morning, wandering the floors like in The Shining. What was it that Scatman Crothers said to the kid? There ain’t nothing in room 562, but don’t you ever, ever go in there.

Finally I realized I was in the wrong wing. Oh, but you are amused. I hope you all realize Fitzgerald and Nathanael West DIED OUT HERE. It’s like a frigging elephant graveyard for writers.

Did I mention that the hotel maid hid my hairbrush so I had to use my toothbrush to comb my hair. Did I mention that I wake up coughing every night. I think I may have gotten TB on one of the flights or maybe from that guy who brought the goldfish into my room.

More airline torture. Thirty minutes before takeoff, my flight simply vanished off the departure flight board. Four and a half hours later I finally got another flight. Of course they acted like IT WAS MY FAULT, like I’d caused the flight to evaporate by some Appalachian voodoo. Now in Salt Lake and the Mormons have me. I may convert. They’ll protect me. It is obvious no one else will.

Did I mention I haven’t eaten since last night except for one banana and the pack of peanuts they “gave” me on the plane. I’ve been gulping caffeine trying to finish my story collection DUE WEDNESDAY AT THE LATEST. It is 4:30 Mormon time and I’m in an Olive Garden Restaurant because THE HOTEL DOESN’T SERVE FOOD UNTIL FIVE. I just ordered, told them I wanted food first then the utensils, water, and tea.

The Mormons got me the food quick; they understand what it is to be persecuted. Back to the hotel to type in corrections on the manuscript and then on to my “event.” Then come morning it’s on to Denver.

Salt Lake, 2:10 a.m. The Ambien ain’t working, lads. No, now we’re in Bob Stone’s Outerbridge Reach territory. THEY will be waiting for me in the a.m., outside the hotel, ready to take me to the airport and another flight to “the mile-high city,” as they pridefully call themselves. Haven’t they read Obadiah? THE PRIDE OF THINE OWN HEART HATH DECEIVED THEE. THOUGH YOU SOAR AMONGST THE EAGLES AND BUILD YOUR NEST AMONG THE STARS I SHALL BRING YOU DOWN, saith the Lord.

Nashville. I can’t frigging keep the time straight; I can’t tell if my cell phone is right. Went out last night after my reading in Atlanta, ate a good meal like a Normal Human Being—had that and a forty-five-minute drive back to the hotel, which meant I got to bed after midnight, then up at 5:30 a.m. to fly here. At least I had an hour free at the hotel. I needed a nap but someone evidently decided it was time to VACUUM MY FRIGGING DOOR. No rest for the righteous. It’s time, if the hotel clock is right, to go to another event. Did I mention I ate lunch across the street at an Indian restaurant and the woman at the table next to me was talking about her dream about peas and how that was sexual according to Freud.

Pawleys Island, Hampton Inn. After a two-hour flight delay I’m swilling down a thirty-two-ounce bottle of Schlitz Malt Liquor from the convenience store next door. I have two frozen dinners and a plastic fork; will dine as soon as I finish my cocktail. Last night I ate what I bought at a Piggly Wiggly deli. It’s worse than Fitzgerald or Poe now. I’m like Richard Greene on his deathbed in 1592—his clothes hocked, holes in a bedsheet so his arms could hold pen and paper, freezing and starving as he railed crazily about “Shakescene,” the theatre’s upstart crow. Yes, lads, that’s where we are now.

Charlotte—after airline hassles I’ll not bore you with, I finally got out of the airport and I couldn’t find my car. That’s what six weeks of touring has done to me. My brain is jelly. I wandered the lots, yes lots, three of them, all big as football stadiums, for an hour, dragging behind me a suitcase and wearing a backpack. I finally stashed the suitcase and backpack behind some trees—it was like being lost in the desert: drop everything—belt, shoes, sanity. Just keep going. Finally found the car, retrieved jettisoned luggage, and made it to this hotel. Now watching Conan the Barbarian, an excellent movie if you’re in the right mood. Got a dinner with a book club at five o’clock, then will perform. In the morning I’ll go to an elementary school to do “something,” not sure what, then on to the book festival in Columbia, SC. But more important things are unfolding on the TV screen. Conan’s getting ready to dice up the giant snake, my favorite part because you get to see James Earl Jones TURN INTO THE SNAKE FIRST. Pretty amazing, nothing else like it in the history of cinema, which reminds me that I mentioned Gary Stewart at my event in Nashville—a hundred folks and not one had ever heard of the greatest honky-tonk singer in history. I’m telling you, the signs of the end are everywhere, like when I heard “It’s a strange, strange world we live in, Master Jack” coming out of my radio RIGHT WHEN I TURNED THE SUCKER ON. You call that a coincidence! There are no coincidences. Everything that quantum physics is telling us, Master Jack predicted forty years ago. Forget Revelations; it’s all in Obadiah and “Master Jack.” But I digress, lads, from the matter at hand. Hard times for Conan, too. He’s killed the snake-man but Conan suffers yet. “He is Conan. He won’t cry, so I cry for him.” That’s what one of Conan’s posse says when Conan’s woman dies. Yes, I must follow Conan’s example; I will not weep, despite all I’ve suffered.

Post script: And I alone survived to tell the tale. Yes, call me Ishmael. The goldfish man, those hookers banging on my door at 3 a.m., the sullen airline employees, that vacuum cleaner sucking on my door, FINISHING a book in the midst of it all, time itself darting back and forth. It is all clear now: my publisher wanted me to die out there for an upswing of sales. They sent those hookers to dope my drink then stick me in the bathtub and cut out my organs, make a bit more money selling my spare parts to Dick Cheney. Perhaps it will all dim in time, but don’t doubt grievous wounds—emotional, physical, spiritual—will never completely heal. Like Conan, I will not cry, so you must weep for what I’ve endured. I’ve slept fourteen hours straight and I’m still exhausted.

Ron Rash is the author of the 2009 PEN/Faulkner finalist and New York Times bestseller Serena and Above the Waterfall, in addition to four prizewinning novels, including The Cove, One Foot in Eden, Saints at the River, and The World Made Straight; four collections of poems; and six collections of stories, among them Burning Bright, which won the 2010 Frank O’Connor International Short Story Award, and Chemistry and Other Stories, which was a finalist for the 2007 PEN/Faulkner Award. Twice the recipient of the O. Henry Prize, he teaches at Western Carolina University.

Art Against the Wall

A Start Is Enough