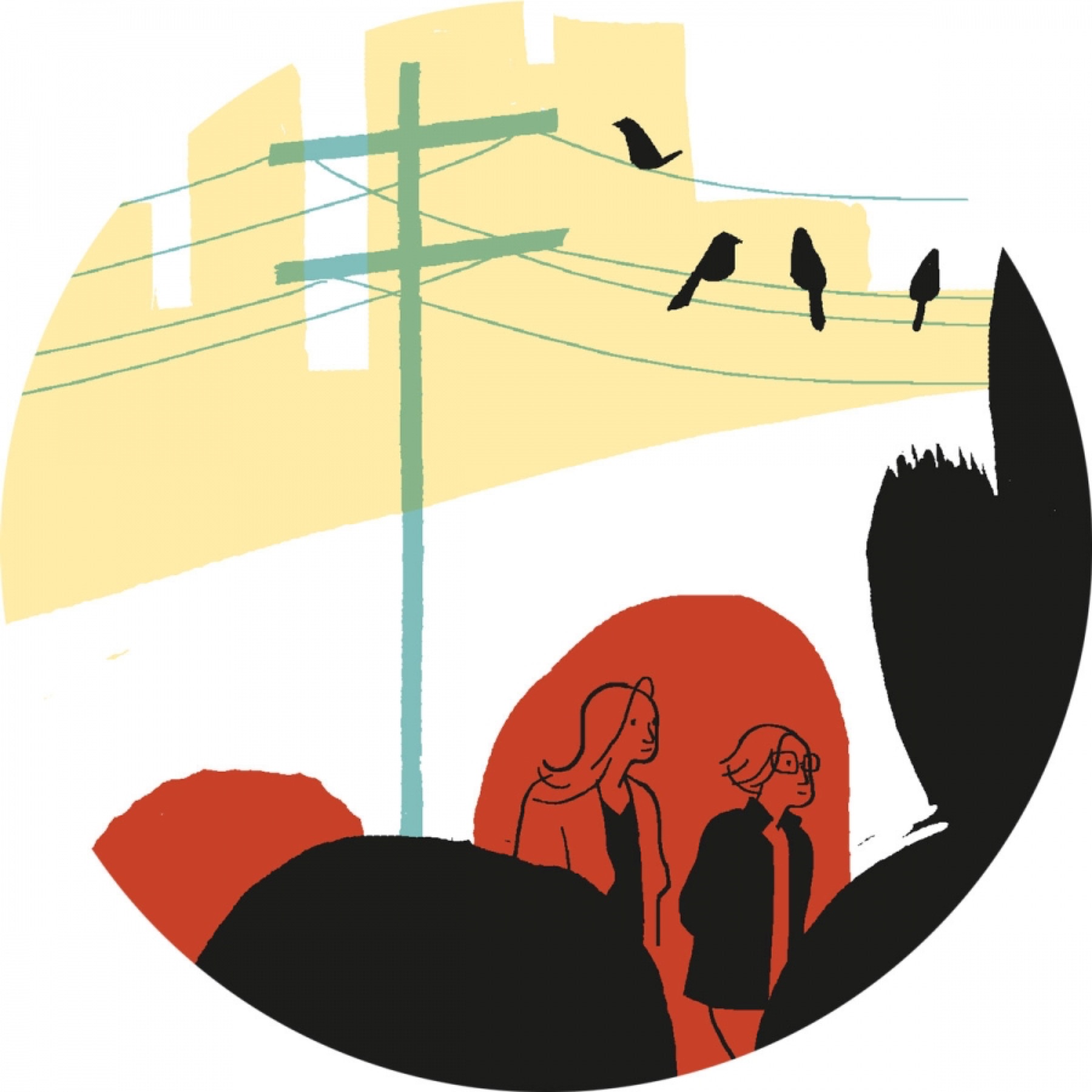 Back in high school, when I first started to grope for words to make sense of life as I experienced it, my friends and teachers took those efforts as a sign that I aspired to be a Professional Literary Person. Because: Of course I would, right? My late father, James, had been a poet and novelist, and my older brother Christopher is a journalist and editor. Between them, they had written shelves of books. “Writing must run in the family!” my teachers said, as though describing a simple matter of proximity, osmosis— something that happened without any real work being done.

These folks meant well. God, they meant well. I know it now, and I knew it then. But the more they talked about “talent” as a mystical gift rather than a pedestrian process, the more difficult the actual practice of writing became, until finally I ran from it in every way possible. Sure, I wrote stuff, but internally, every word felt like a personal, even a moral, failure. I knew that no magic wands had been waved over me at birth, and that putting words together is more like driving nails or shoveling snow than like conducting a symphony.

I also knew that my nails, even when earnestly driven, tended to go crooked; at least ninety percent of my drafts were pretentious and overwrought, and that’s a generous estimate. It was only a matter of time, I feared, until everyone else saw this, too. Before long, the simplest English assignments turned into insomniac nightmares I put off until they were weeks past due. The last thing I wanted was to be human and imperfect. The last thing I wanted was to let anybody down.

So, I kind of fell backward into writing, not because it came “naturally” or because I wanted to join the family business (in his novel Money, Martin Amis, the son of Kingsley Amis, famously joked, “Oh, sure. It’s just like taking over the family pub”), but because curiosity drove everything I did, and eventually that curiosity won out. I had a lot of questions about how the world worked and what motivated the characters who inhabited it, and notebooks, unlike people, never tired of my need to know. Having been a painfully shy, sensitive kid, I felt less alone when I read books and watched films. I wanted to create stories that might do the same for others.

Still, it took years—years—before I had any clue what I was doing, and even now, I probably flounder more than most. Were it not for the mentors who gently piloted me through the sludge of self-doubt and taught me that hard work trumps talent by at least a factor of ten, I probably would have feared writing all my life.

As an undergraduate at Duke, I learned from two professors, Dr. Lawrence Goodwyn and Reynolds Price, about writing, life, and the writing life. Dr. Goodwyn, a former Army captain turned beat reporter and labor organizer, was a veteran of the civil rights movement and a historian of American populism. He encouraged his students to fight what he called “the hustle,” a broad term for what the world expected of us and the walls we built around ourselves to stay safe. He also did not care for big words or pretty sentences, both of which he noticed I relied on heavily. He saw that my work was mainly a performance, a soft-shoe, a museum-quality hustle. He urged me to start digging into the issues that really mattered to me: poverty, inequality, and race. “Every day, give yourself permission to make an error,” he said, before adding his favorite coda: “It’s hard to be human. It’s hard to be free.”

My sophomore year, I enrolled in a class on Milton taught by Reynolds Price, who was then approaching seventy. With a beautiful shock of white hair and a vast collection of colored silk scarves, Reynolds (he encouraged students to use his first name, though many called him “RP”) was as much a presence you felt as he was a person you knew. Whatever the diametric opposite of a doomed, depressive, wracked-with-neurosis writer is, Reynolds was that: a true epicurean in every sense, but the most disciplined and productive one I’ve ever known.

My final paper was on the epic similes in Paradise Lost. RP thought it showed a faint pulse. “All you need to do,” he told me over dinner that spring, “is write like hell.” But, he added, “You also need about ten percent more arrogance.” It took me years to understand what he meant. Before you can say anything that matters, you have to believe you can say something capable of mattering.

A fter waiting tables and tutoring kids for a year after I graduated, I decided to apply to the MFA program at Columbia University’s School of the Arts. The only problem was that the application asked for a thirty-page writing sample, and I had never written anything over ten pages—ever. And those ten-page papers, such as they were, overflowed with ham-fisted academic jargon and postmodern claptrap. (I’m pretty sure I used Louis Althusser’s phrase “the ideological state apparatus” unironically, and more than once.) I was starting from zero.

Over the course of a hectic month, I forced myself to write loose, rambling essays on books and films and whatever else came to mind. For once, I was writing like hell, and doing it honestly, if imperfectly. My desire to say something, anything, had finally eclipsed my fear of not saying it right. Because I did not expect to get into grad school, I really had nothing to lose.

About six months later I received a call from the woman who changed everything for me. Her name was Patricia O’Toole, and in addition to writing presidential biographies, she directed the nonfiction program at Columbia. Not only had I gotten in, she said, but I had also been awarded a scholarship. My hands didn’t stop shaking for the rest of the day.

The study of writing in New York City, it turned out, is not all that different from the study of religion in Rome. It is more comfortable for high priests and acolytes than it is for oddballs and misfits. Never knowing quite how to navigate the place, I felt as though I had landed on the moon.

My classmates, many of whom were already working on books, seemed light-years beyond me in every way. They already understood the basic formats of narrative nonfiction (profile, process story, etc.), whereas I had to learn these by sitting down with a stack of magazines and a pack of colored highlighters, mapping out how each type of piece was structured. One lovely woman tried to engage me on the subject of James Wood’s latest piece in the New Yorker, and I expressed great surprise that the man could both act in films and review novels for such a fine publication. I had confused James Wood, the eminent English critic, with James Woods, the supporting actor in Scary Movie 2.

Sometimes I spent whole weekends curled up in my Harlem apartment, staring at the concrete wall facing my bedroom window and wondering how I’d survive two years of feeling so completely out of my depth.

The brightest light in that surprisingly dark time was Patty’s nonfiction workshop, which she managed to pack with a unique mix of cheerleading and ass-kicking. “The great thing about writing,” she told the class during our first session, “is that it isn’t like a performance at Carnegie Hall, where you get one chance, and if you screw it up, it’s over. You get to work on your pieces as much as you want before you put them out into the world.”

I probably should have worked on mine a little more. I turned in as my first submission a straight-faced tour through the world of one hard-rock tribute band, which, like my subject, had no focus and jumped all over the place.

Instead of saying, “There’s no narrative or through-line here,” which would have been both fair and accurate, Patty gently explained that the type of journalism I wanted to do worked in much the same way a good documentary film does. “It’s all about where you place the camera,” she told me. All the arrows—the scenes, the scraps of dialogue—have to point somewhere; they have to reveal something. Or, as she reminded our class, “The story of X is the story of what?”

I revised and submitted that same terrible story four times, and every time, Patty filled the margins with handwritten notes that must have taken her hours, assuring me it was getting better. This was a big deal, because Patty was not one to pump up the fragile egos of students who couldn’t cut it. If she thought the odds were stacked against you, she would say so. While she did not give easy praise, she did respect hard work, and I vowed to make up for in work what I lacked in skill. Work was the one factor in the equation that I could control.

With extraordinary kindness and a shot of Midwestern good humor, Patty gave me the tools I needed to improve my writing, and she demystified the process of revision until it no longer hung over my head like the sword of Damocles. More than that, she took an active interest in how I thought and felt about the world, not just in how I wrote about it. Whenever I came to her with an idea for a story, she usually answered it with one phrase: “Think bigger.”

Sensing, I think, that I felt a bit shipwrecked in New York after I’d completed my coursework, Patty also regularly penciled me into her very busy social calendar. We took long walks around the Upper East Side, drank beer, watched softball, attended music performances in Central Park, and checked out the fireworks displays on the Fourth of July. She took me to parties attended by unfussy people and introduced me to a number of extraordinary writers who didn’t involve themselves in the world of high priests and literary acolytes. Some evenings, we just sat around her apartment and talked about nothing in particular.

Like Larry Goodwyn, she had a very low tolerance for bullshit, and like Reynolds Price, she never missed an opportunity to experience something wonderful, but as a mentor and friend, she was generous in a way that was all her own. She could look at a student and see the writer he or she could be, even when the student couldn’t.

Now, whenever I teach seminars or give craft talks, Patty O’Toole is always the teacher whose lessons I pass on first, the person to whom I owe the greatest professional debt. Never do I miss an opportunity to tell young writers about the story of X, or about the journalist’s camera. In the narrative of my writing life, she is always the final shot.

More Writing on Writing from the 100th issue.

Bronwen Dickey is a contributing editor to the Oxford American and the author of Pit Bull: The Battle over an American Icon. In 2017, she was a finalist for the National Magazine Award in feature writing.