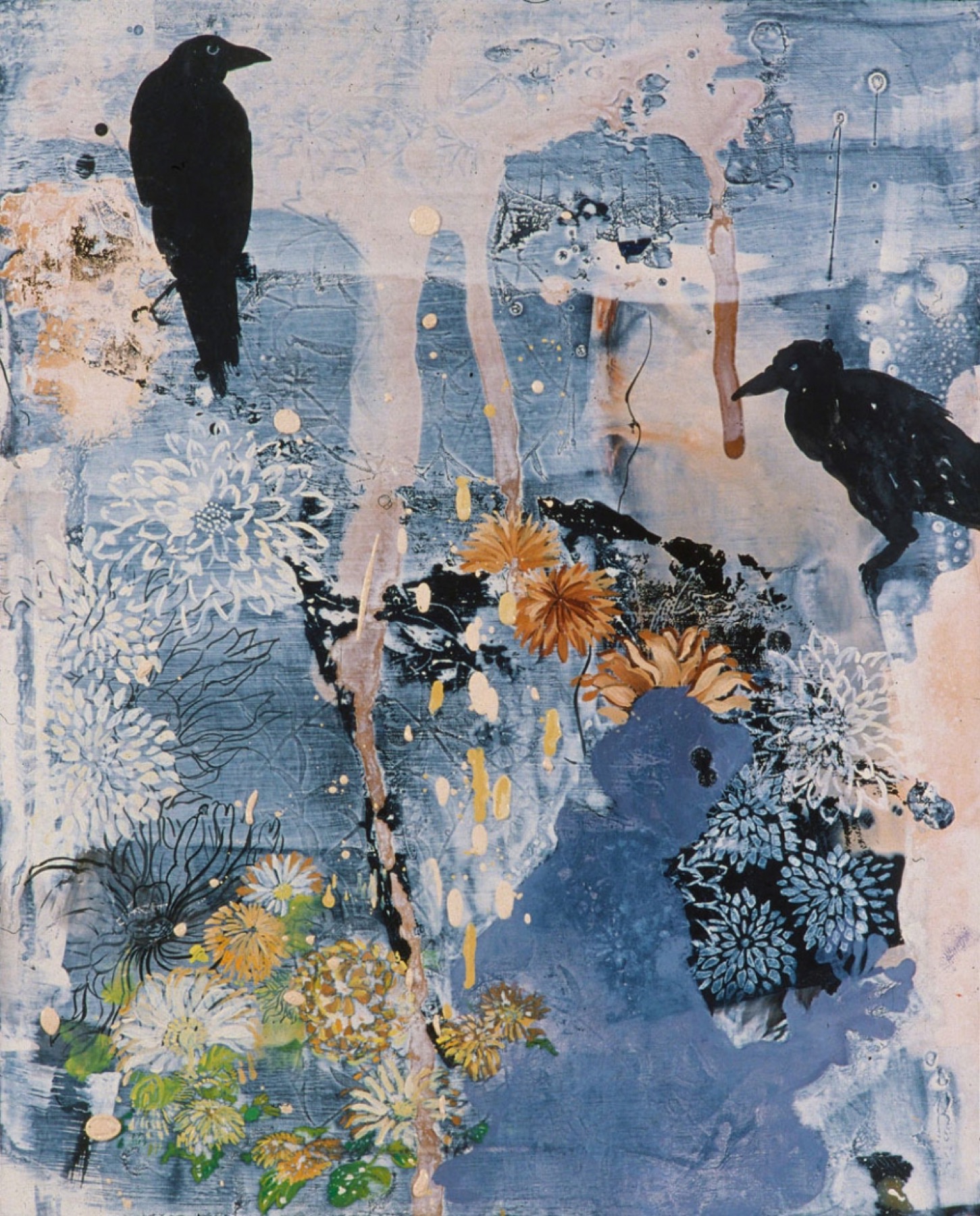 “Petal and Pearl,” by Catherine McCarthy. Courtesy of Clark Gallery

I’ve come to have a friendship with a raven in Paris. I call him Cleitus, a name that I picked up from a Dukes of Hazzard episode or Greek mythology. The fact that it could be either reveals much about my raw ingredients, the stuff from which I am made.

Cleitus, kidnapped by Eos, who had absconded with several men. Eos was destined to be forever in love, she of rosy-fingered dawn and white wings. Jealous Aphrodite had cursed Eos with insatiable sexual desire after finding her in bed with Ares. Cleitus was firewood, incinerated.

My Cleitus has the thick neck of a typical raven, the bump in his beak, the coarse rattle in his call.

We both like to watch the dumpster divers on Rue Duvivier at night: he from a perch on the arm of a streetlamp, me from the window of my humble apartment. It is an active community, democratic. The grocer gently places expired food and flowers on the top of the dumpster behind the store, and there, under the conical glow of the streetlamp, well-dressed men and women in scarves and hats gather to pick through the edible refuse, cradling arms of not-quite-wilted flowers, honoring the life left in diminished things.

In Paris, I have the sensation of untangling myself from an old story, of being singular. Not married, Southern, or a mother. I am anonymous, a body that moves in and out of an unremarkable apartment door on an unremarkable street in a remarkable city.

I am four years late finishing a book and sit at a small kitchen table in my Parisian apartment, paid for with a stipend from a fellowship. Cleitus alights on his perch, and I take a break from work to watch him. I’ve come to know his schedule; he lands to rest on his streetlamp before lunch and after dinner. I imagine it is a smart perch there above the overflowing dumpster.

I am, of course, more interested in Cleitus than he is in me—a defining trait of my time in Paris. Looking, idealizing, then moving on unnoticed.

I keep my own schedule—rising late, making a bachelorette breakfast of yogurt and cookies. In the afternoons I go for coffee at Café du Marché and a museum visit. When I stop to purchase groceries at Intermarché, I admire signs for the Ugly Fruit Campaign, which touts “inglorious” produce at a discount.

For dinner I frequent the crêperie, where an ancient man spreads batter and gruyere with muscle memory, elevating a simple dish into something I grow to covet. With a few twists of the peppermill and a tin foil swaddle, he hands over the steaming hot crêpe, which I manage to finish before settling down in my apartment, watching Cleitus and the dumpster divers from the window, working late into the night.

I remember the first time I could tell the difference between ravens’ banshee croaking and the cawing of crows. I was walking the Long Trail in woods with trees so old and canopies so thick that the overcast New England day felt darker than it should have been, and I heard laughing and calling, as if three old crones were scheming around a cauldron.

When I camp on an island in a glacial lake in the Adirondacks, they wake me up. Circling my tent, as if with purpose and delight.

How strange, to have a call that unsettles. And to hurl it across the sky. To be a living metaphor for darkness, known for leading wolves to a kill, rumored to control tides.

And yet, upon further examination, there is evidence for tenderness and advanced intelligence in ravens: tool use, mating for life, rituals that reinforce pair bonding. The raven warbles softly to its mate during courtship, and chicks warble while being fed. This is called a “comfort sound.”

A woman knocks on my apartment door, startling me. I know no one here in Paris; my first reaction is one of alarm. But she is smiling when I open the door, offering me a plate of food, speaking to me in rapid French I can’t follow.

I recognize her—she must be a neighbor. She hands me a sleeve of cookies, partially opened. I smile, string together notions of gratitude in basic French. Perhaps I am hyperbolic in my translated thanks, as she comes again the following night, bearing apples and yogurt.

I become worried that there is something in my appearance that asks for pity. I keep to myself; I have folded inward, contemplative. I cannot recall another month when I have been left to think and live on my own. When I can walk down the street and not smile at others. My time in Paris begins to feel like a chrysalis; or perhaps I only will it as such. It’s as if I might slough off the last unsophisticated parts of myself, finish my overdue novel, and resurface in America a shinier version of myself.

It’s okay, I imagine telling the woman offering cookies. I want to be alone.

I have twice stolen the same book.

I like to think of it as a prolonged borrowing, but apparently I never returned two different copies of The Collected Works of Edgar Allan Poe. I “borrowed” the first from a middle school boyfriend who had better taste in music than I did, who Rollerbladed to my house with mixtapes and good books.

I “borrowed” the second from the first real Northerner I knew, a boy with a Boston accent so thick I thought he was foreign. I had never traveled north of the Mason–Dixon Line before college.

Years later, after I published my first book, he came to my reading in Boston, raising his hand for the Q&A. “Why did you steal my Edgar Allan Poe book?” he asked, smiling. There was a collective laugh from the audience. I felt a flash of shame.

I have no real memory of stealing the book—the first time or the second—which puzzles me, because I remember everything, like the weird pair of red pants I wore once in college, the scent of bad milk behind the elementary school, the shape of a stranger’s head in the church pew in front of me in 1987. This must have been a subconscious trespass, as if something inside of me was reaching out to those books, attempting to connect to a life of letters I wanted but did not yet have the courage to pursue.

They were both beautiful books, black leather with gold embossed lettering, gold leaf pages. They were luxurious books I could not afford at the time.

Poe’s raven is a grief visitation, an insistent prophet reminding the young student: do not forget.

The theft is a heart beating underneath the floorboard of my life, the thing about yourself you can’t outrun.

I see ravens everywhere in Paris, especially the Tuileries, in pairs. I run down to the gardens on the weekends. Creature of habit, I sit on the same bench every time, watching them pick through the freshly tilled soil among the early tulips. There is one raven I can recognize; I call him Fat Head. He has a wide waddle and his partner strikes me as a nag; she is, as far as I can tell, the brains of the partnership. Sitting there, watching the ravens in April, I feel that I have witnessed the gradual oncoming of spring, the actual moment it crossed over and fell upon the city.

When I was young, I used to stare out of my bedroom window in North Carolina, hoping to identify the very moment when day turned into night. I never found it. Change is slippery, a plume of smoke dissipating in the cold air, a beam of light falling upon a garden and waking it from winter.

I had romanticized this month alone in Paris. Surely Paris was the only city that could transform a girl from a small tobacco town in eastern North Carolina into someone educated and elegant. But my dishes piled high in the sink, and I got to see who I really was away from it all: a lonely woman watching a bird, eating generic cookies for dinner.

Intermarché wants me to know that the disfigured eggplant is still delicious. So is the ugly carrot, the ridiculous potato, the failed lemon, the hideous orange.

A grotesque apple a day, the sign says, will still keep the doctor away.

To grow up in the rural South is to know that you were fed on culture that the educated world sneers at. To become part of that educated world is, for me, to remain self-conscious, to wait for the moment where you are found out.

Once, while giving a reading at Dartmouth, I came to the microphone and blurted out: My grandmother had an eighth-grade education. It was part defiant proclamation, part apology. The fine print of a life.

Cleitus is there, morning and night.

My neighbor brings me a plate of ripe, glistening grapes—plump and scarlet, freshly washed.

The next night I see her down at the dumpster, rifling with the others, congenial, arms full of flowers, cucumbers, bananas.

I did not die of salmonella or E. coli, though for forty-eight hours I waited for it to overcome me. I had eaten someone else’s trash. I had consumed someone else’s kindness.

There is humility in knowing you have eaten food no one else wanted, the food not fit to sell. That you have been nourished from someone else’s charitable gaze. Despite appearances, you are as you always were, one thing to the eye, and another inside.

Megan Mayhew Bergman is the director of Middlebury’s Bread Loaf Environmental Writers’ Conference and the Robert Frost Stone House Museum at Bennington College. She is the author of two story collections and a forthcoming novel. She was a fellow at the American Library in Paris in 2016.