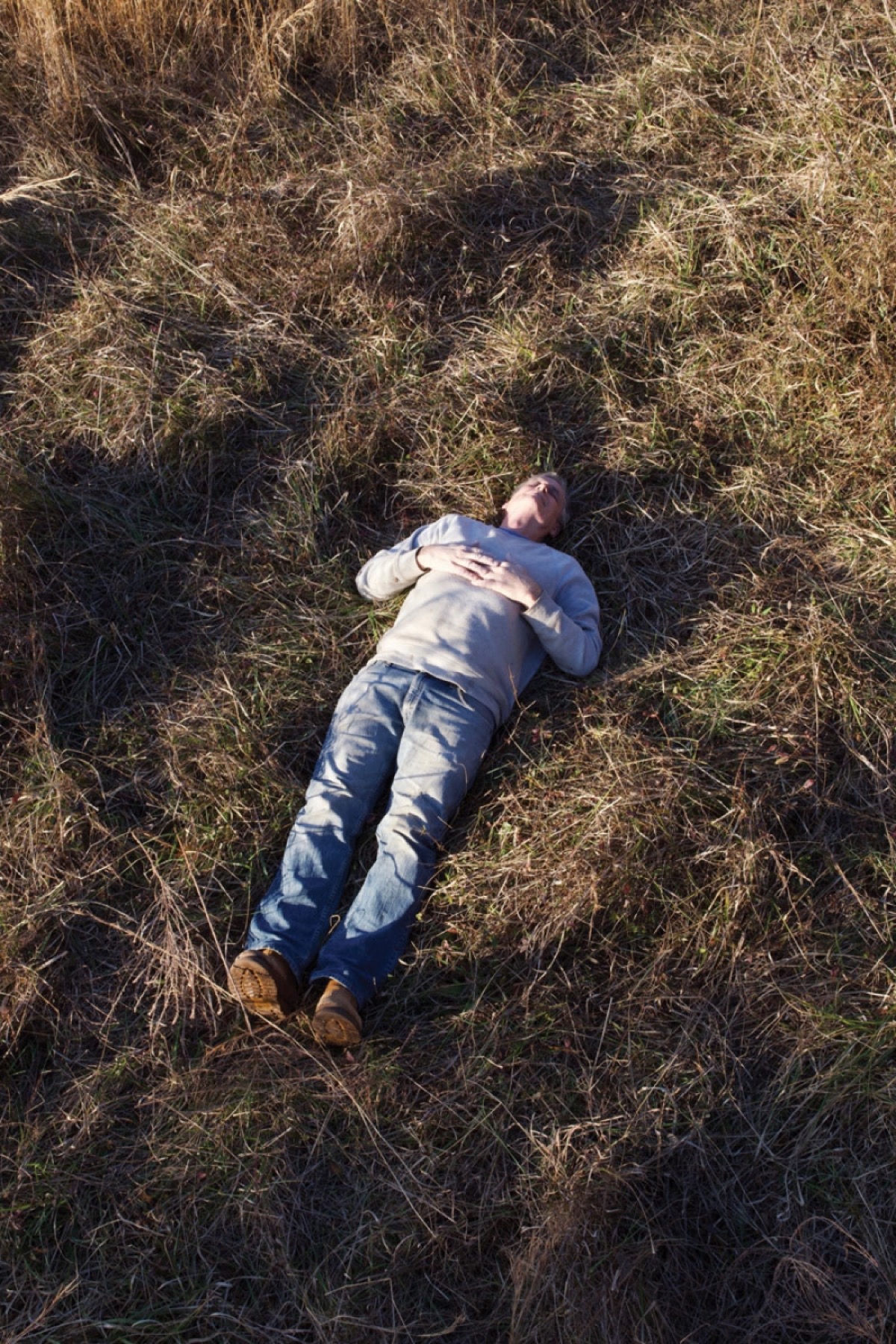 Photographs of Stephen Driver, the author’s father, by Matt White

“Seems like a long time,” my mom replied, when I asked her how long my dad had been talking about building his own tomb on their land. We had both listened to various iterations of his tomb planning for years, including preparations for a presentation he made at a ceramics conference in Mobile, Alabama, in 2002 about a double-chambered vessel that he copyrighted as Tombware. At the time of the presentation, my dad was in his early fifties. The other ceramics professors who attended his talk thought he was macabre, he reported. One even asked if he was suicidal. In response, he tried to explain that the tomb was his final creative act, one that he would make with love, as he had made ceramics daily for the past forty-four years. My dad wanted to use his art to discuss how Americans try to commodify everything, even death.

My dad, now sixty-nine, a potter, assumes he will die before my mom, seventy-one, a weaver. My dad is healthy, but his father died young of a heart attack, and his two older brothers died suddenly, one of liver cancer and the other of a lung disease, and I think he carries the weight of those deaths with him. My dad collects the pottery of the Caddo Indians of Arkansas, who were buried with their art. My parents admire the ceramics and weavings found in pre-Columbian Peruvian tombs, in which people were buried with handmade objects including textiles that were made specifically for this purpose. As my mom explained of the pre-Columbians, “They wanted to be prepared for the afterlife, and they didn’t know what it was like.” My mom, inspired by Chancay burial dolls in ancient Peru, created a series of woven dolls which she mounted on sticks she found at the river near our house. My dad has requested that my mom, upon his death, create a mummy bundle. At times, my mom, annoyed by the tomb talk, replies that she plans to close his tomb and walk away. “I’m not hanging around,” she said to me. Though occasionally she seems at least intrigued by the idea of creating the textile in which my dad’s body would be wrapped. “I’m not into tomb maintenance,” she said, then paused. “Well, maybe a mummy bundle.”

If my mom sometimes grew weary of my dad’s talk of planning for death, she understood his motivations, his desire to make his tomb his last act of creation. Both of my parents were born as city folk, from Detroit and Charleston. By the time they met in 1977, my dad and his three brothers had already given up an urban lifestyle and spent a summer digging the foundations for houses in the Ozark Mountains. My parents, in love and wanting to make art, became part of the back-to-the-land movement in the 1970s with many others around the U.S. who wanted to buy land, grow their own food, and be self-sufficient. Some back-to-the-landers settled in rural Arkansas, lured by the cheap mountainous terrain with rivers both deeply blue and green, attracted to the idea of building a like-minded community. When I was a child, back-to-the-land families were our neighbors, if miles down the dirt road. Adults helped each other raise roofs and till gardens, and we children of back-to-the-landers spent our days in the fields chasing lightning bugs or in the rivers, swimming until dusk as if we were born to live in water.

My mother compares my dad planning his death to the way she and other women in the back-to-the-land movement planned to give birth at home with a midwife rather than in the hospital. Most of the back-to-the-land children in the Ozarks, including me, were born at home. As my mother explained it, “The back-to-the-landers didn’t move back to the land so they could end their lives with a conventional burial.” My dad wanted his death, like his life, to be a work of art—a tomb he designed and filled with ceramics—and one that would allow him to define death on his own terms. My mom, for her part, said, “I never planned to put anything in the tomb, but heck, who knows.”

My parents don’t claim to know much about life after death. As a child, I was blissfully unaware of religion and mostly oblivious to TV; we didn’t have one for years. Rather, my sense of life and death was informed by nature. As a result, I felt only curious, at home with natural life cycles and possessed by the idea that I needed to find my place among the land and its creatures, to test my mettle. I stacked rocks and collected the river-worn ones, dug soil and ate soil. The smell of earth beckoned. I pulled stones from the tilled garden, fistfuls. Under piles of hay, I found nests of baby copperheads, their bodies well-fed, hourglass stripes glistening. I swam across the Little Mulberry River when it was brown, swollen, angry from flooding, fighting against the strength of the current. I was raised in equal parts by my parents and by the land.

As I grew into adulthood and moved away from Arkansas, I held on to an idea that my parents had demonstrated—that I could create my own reality. For me, that involved becoming a writer and making a commitment to the written word, thus eschewing a life with a regular salary, a house, and things. For them, buying the land was my dad’s way of committing to a different way of life than the one he had witnessed growing up. His father had a corporate job and hated it; he smoked and drank and was rarely around to be a father to his five boys. He died of a heart attack when my dad was fourteen, and at the funeral home, my dad remembers burning up with anger because, he said, “They were torturing my mother and trying to get her to spend more money on a casket because my father deserved it.” Much of his life, as I’ve witnessed it over the past thirty-eight years, has been a reaction to his dad’s life and death.

My dad started building his house in the Ozarks in 1978, and he has continued building steadily since then, adding on rooms and doors and windows and porches and solar panels, building a barn, repairing the barn, making an outdoor pizza oven, building a wood-fired kiln, making a second garden with an elaborate wooden deer fence. When I asked my dad about his current building projects, he mentioned a “solar project” to reduce his carbon footprint, a rock wall down at the creek. He expressed a desire “to create a place of beauty, if anything for myself.” I’ve long thought that the day my dad stops building will be the day he dies. 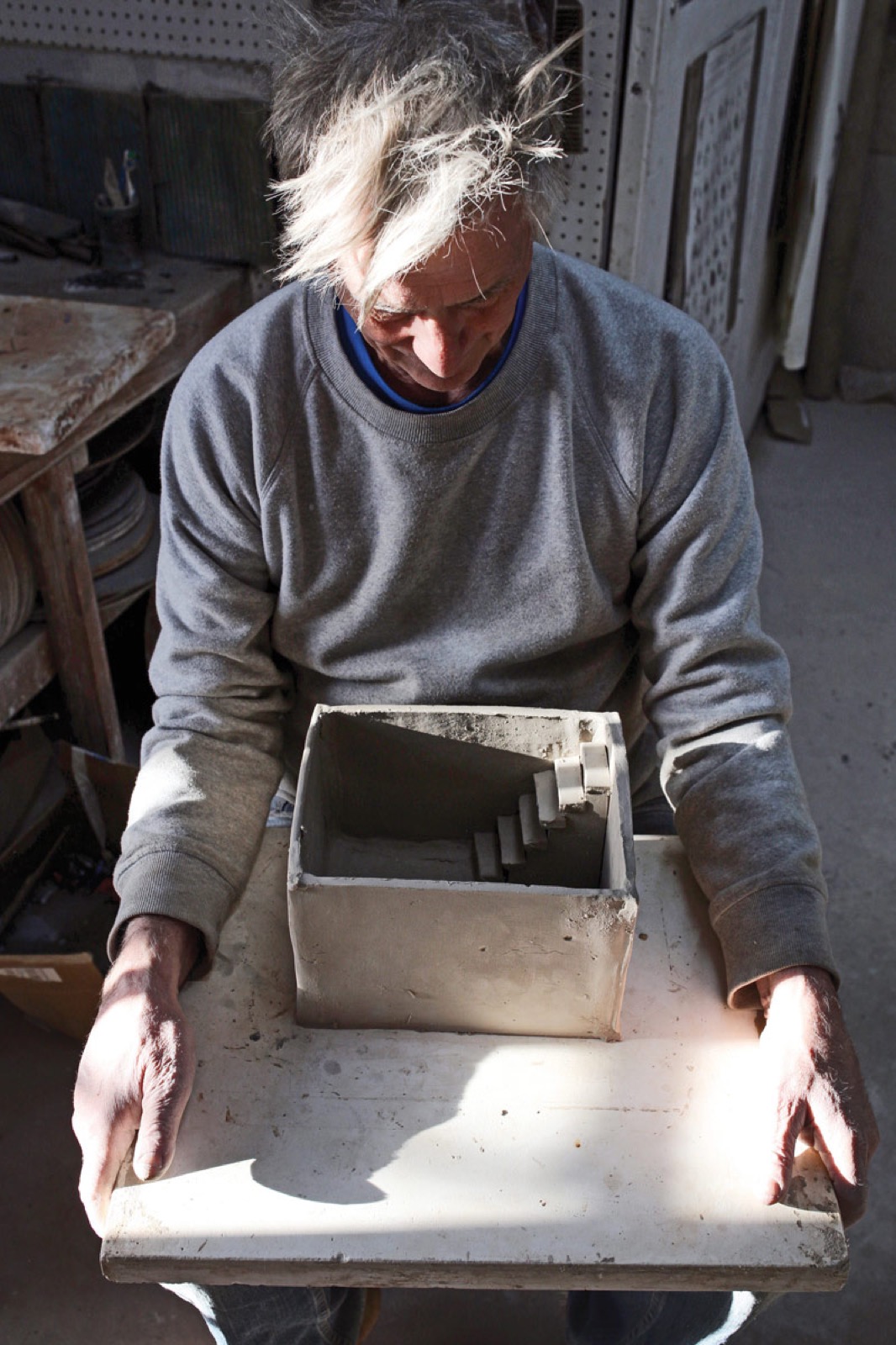 I live in Mexico City now, though I still visit my parents several times a year. I flew home in February 2020 to witness as my dad made tomb preparations. I had only ever heard him talk about his tomb—not seen him start building it. I understand my dad’s desire to build his tomb because I know him well, know his need to build and create and make the objects that are a part of his life—everything from the house he lives in to the cups and plates he eats off each day. My first morning home, as my mom ate breakfast and my dad looked at his laptop, she asked, “You are ordering up your tomb?” He peered into the screen. “I found a tornado shelter, and right now it is looking like the best possible thing. We will use it as a storm shelter, and then when I die we’ll just bury ourselves in it. I think it will work.” If the ground wasn’t too soggy, my dad was going to have Willy, a neighbor, come over with his excavator to start digging the tomb. Earlier, he’d joked about having a “signature death drink” at his funeral: “Something with bourbon in it. I could make sure that I had ten or twenty gallons of my homemade beer available. Tomb beer. I could make labels and everything: Stevie’s Last Stand Pale Ale.”

Whenever my dad suggested some new idea related to tomb planning, my mom would respond, “I’ll have to talk to the natural dying group,” referring to several older members of the back-to-the-land movement in their town, Oark, who got together on a regular basis to talk about dying in a dignified way and being buried in a sustainable manner. Many of the back-to-the-land couples from my childhood still lived within miles of my parents’ house, and as they grew bent and wizened, they banded together once a week at a potluck to discuss how to create the conditions for a dignified death outside of the confines of hospitals and funeral homes. I had known the members of the natural dying group since I was born, and I understood their wishes to find a way to die that respected their connection to the land on which they had staked their lives, their beliefs. “We’re still seeking independence from the bad decision-making of mainstream culture,” explained my dad.

After breakfast, I spent some time with my dad in his clay studio, where he has been working for more than forty years. The workshop is filled with pots, tools, family photos (me as a dimpled baby in a bathtub), postcards of ceramics (including one of the copyrighted Tombware vessel), and plastic containers full of glazes (including “bone ash”). We talked as he worked on a clay maquette of his tomb, fitting together the walls of the miniature version. “If I didn’t live here, I would pretty much be at a loss,” he said. “I don’t know what I’d be doing.” As his child, I knew that living on the land hadn’t always been easy, that it was a love that was earned through respect, through time invested in understanding the soil, the native plants and trees. Looking out the glass doors leading to his shard pile—where he threw all the pots he considered to be failures—he said, “Your mom and I have planted a lot of trees, and a lot of trees have died.”

Later, my dad walked beside me and Ernesto, my parents’ dog, from his pottery studio into the soggy field where un-baled grass waved golden in the late afternoon light. Willy wouldn’t be able to come today, after all. We made our way toward the site of my dad’s future tomb, which was marked by a rusted corn sheller. When I was eight or nine, I decided that the corn sheller would be my playhouse, and I took yarn from my mom’s studio and wrapped it around the sharp machine until my hands were cut and bleeding from battle with its rusty edges. Dad wanted the sheller, which had been on the property since he bought it, to serve as the headstone for his tomb, citing Marcel Duchamp’s readymades. “The corn sheller for me is a piece of sculpture.” As dusk set in, he looked out over the field toward the Little Mulberry River. “This is one of the few places on the planet where I feel connected,” he said. “I didn’t want to join the system. I wanted to create my own reality, and I’m going to create my own reality on the way out too.”

Alice Driver is the author of More or Less Dead. She lives in Mexico but returns to Arkansas regularly to visit her parents in Oark.