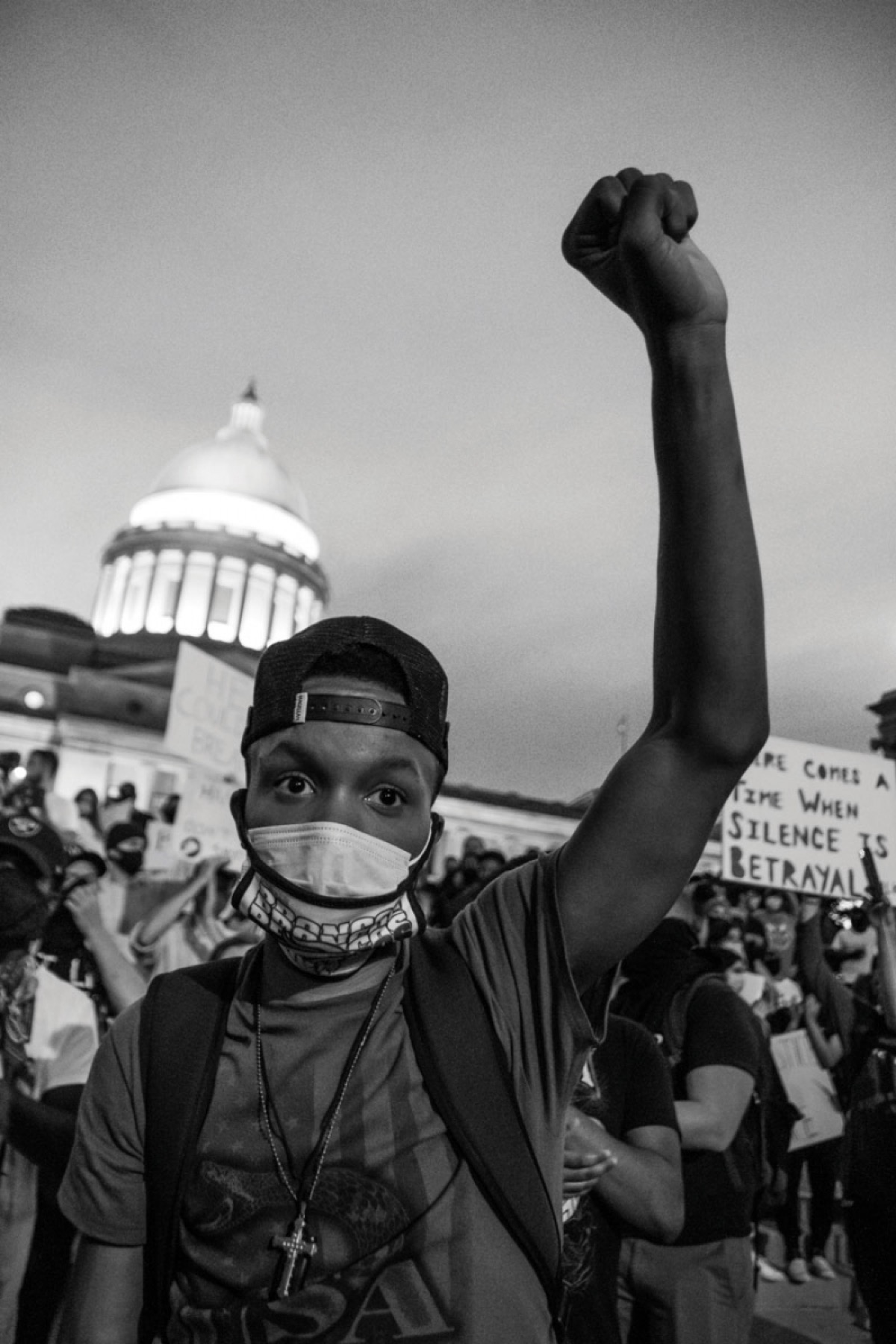 Photo by Ebony Blevins | Kris Woodruff, a protestor at the Arkansas State Capitol

Poem for an Election Year

Nearly 13 weeks on the fritz, & not one
of these Planet Fitness motherfuckers
have lifted a socket wrench
to fix the busted elliptical machine
trained on Wolf Blitzer’s dignified beard.
This is a conspiracy against me.
I’m talking full-on Russian sleeper cell
employee of the month, clocking in early,
hiding in high waisted chinos & purposely
shrunk purple tees. Activated by his special
blend of creatinine coffee, my foe zips up
a 10-ft. ladder & loosens Tucker Carlson’s
bowtie with the shake of his feather duster.
Last week, we flew next to one another
on a plane from Memphis to Albuquerque.
My enemy looked at me, his seatback
screen, & deliberately cued Fox News.
I’m ashamed to admit, I interpreted this
an invitation to a kind of midair micro-
aggressive pissing contest—a gauntlet,
to which, I responded by jacking NPR
11 clicks inside my wireless Beats by Dre.
It’s embarrassing to say, I couldn’t let it be.
That I took my good finger-pointing finger &
jammed it into the headrest in front of me—
until Rachel Maddow’s plastic midnight
frames, set against the whites of her eyes,
became a hypnotist’s spinning talisman
drawing us into Mutually Assured
Cacophonous Paralysis. A most unproductive
condition, infecting parties on either side
of the armrest. Symptoms include an inability
to admit to oneself, let alone some chimeric
Crip, or Capulet, our deepest fear is not
that we are inherently adversarial. Though,
perhaps, it should be. I suspect that, like me,
your primordial nightmare involves a president
who possesses puny chest muscles,
one in particular. E.g., if big bank can take
literal continent, then you & your renovated
ranch, your family’s strawberry patch,
don’t stand a chance under a hostile regime. Friend,
what divides us is thin as a Holiday Inn gym towel
wrapped around a potbellied tyrant, sporting an
erection. A firewall we, somehow, vote to keep intact.

Marcus Wicker is the author of Silencer and Maybe the Saddest Thing. His poems have appeared in the Nation, Poetry, and the New Republic. He is an associate professor of English at the University of Memphis, where he teaches in the MFA program.