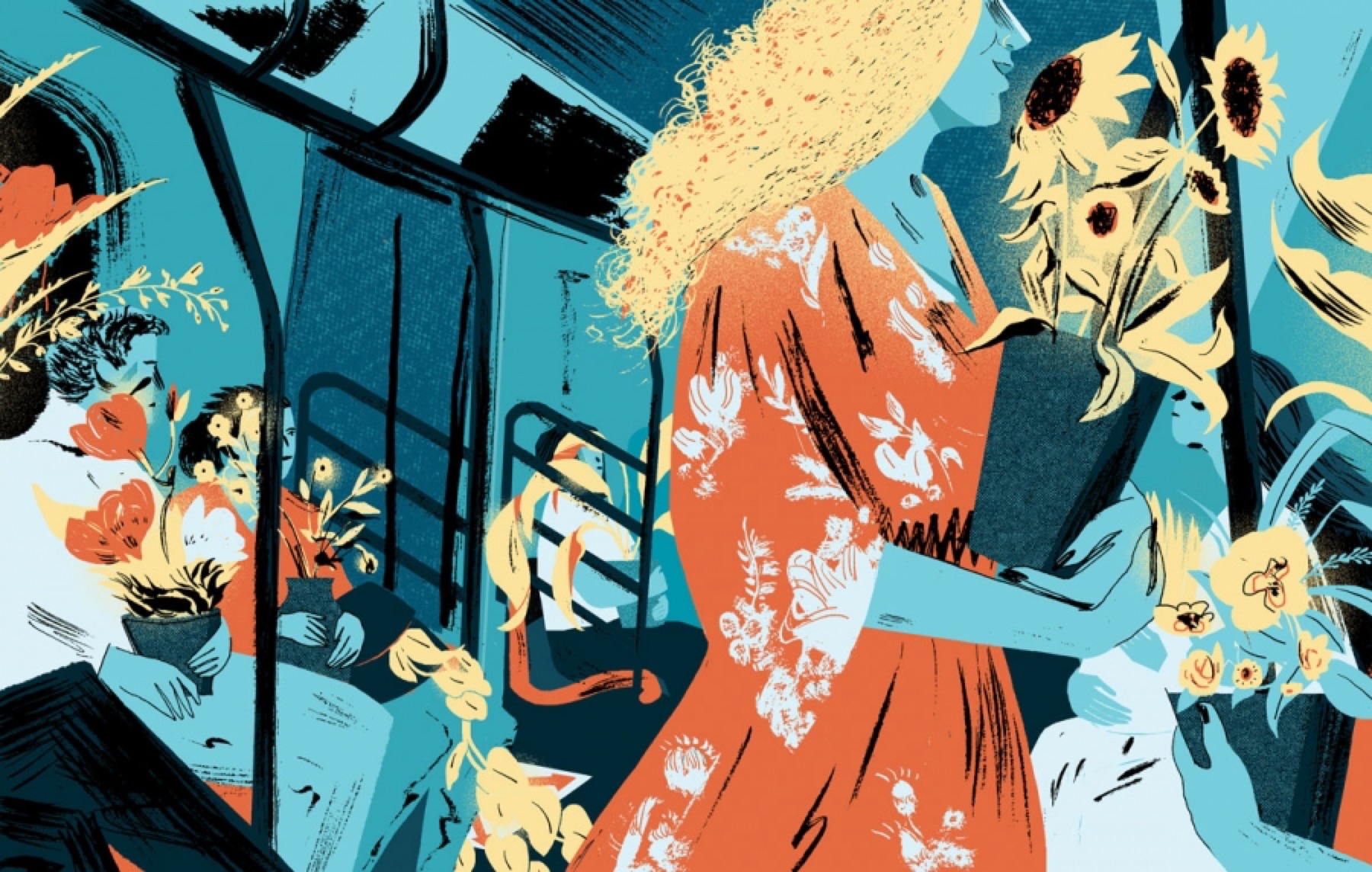 If God Had a Name

I f God had a face, what would it look like? It was something I had wondered for as long as I could remember, when my parents first taught me how to pray Now I lay me down to sleep, kneeling beside my bed on the blue shag carpet. Sometimes I thought of him as a severe old man, imperious, a mighty sword at his side, his hair and beard a brilliant white and flowing down the steps of the platform that held his throne. But other times I pictured him in the guise of the Southern Baptist preacher from my childhood—ginger-haired, freckled, and rotund, always ready to pull you close in a secure, loving embrace. These two disparate images volleyed in my mind. The wrathful old man, ready to cut me down when I was wicked; the loving father, offering his chest on which to lay my head. Back and forth, back and forth, these two conceptions of God and his nature battled, a war between fear and love.

Fear was usually the victor. At fourteen, I joined the Pentecostal church, and like most people who find themselves subsumed by fundamentalism, I was profoundly afraid of hell. I was gay and closeted, terrified of what would happen if I admitted the truth of who I was to my family and community. Instead, I would petition God for healing and deliverance, both on my knees at the altar and sitting at a black-lacquered baby grand piano, where my furious chords joined with acoustic and bass guitars, the jangle of tambourines, and the backbeat of drums—always the drums—to pound out a song that caused the congregation to clap and dance in ecstatic time. The Holy Ghost moved along with that rhythm too, and I watched as the tongues fell and smoldered like tiny flames in the mouths of people across the room. Sometimes they would rage in one person and the music would cease, allowing everyone to hear the message being delivered directly from God in strange guttural syllables. A translation in the English of King James, peppered with thees and thines, would usually follow. Then the music might start again, just as loud and urgent, or slow and soothing, depending on the mood that had fallen like the gloaming in some mountain hollow.

It was 1995, the year Joan Osborne’s “One of Us” was released, the end of my eighth-grade year, in rural Kentucky where homophobia was—and continues to be—rampant. My secret boyfriend and I—the one I had kissed in darkened classrooms after Science Olympiad practice, his blond scruff chafing my freshly shaved cheeks—had broken up. We were bullied and threatened in the hallways at school, and gossiped about when we passed notes between classes and had lunch together. I ache for those two boys now, for the normal acne-scarred romance they were never allowed to have. I bear the shame of my own actions that came after I joined the church, of sending him a bitter farewell letter that spewed the very same judgment we had grown accustomed to receiving.

This is what religious fundamentalism does: it sullies loveliness, it plants a malignant fear in pure hearts, it deadens souls to the beauty of art and song. It blinds people to all the names and faces of God.

I f God had a name, what would it be? God’s names, I knew from my early years in the Southern Baptist church, were many. I had won dozens of scripture drills and verse contests by memorizing them, along with characters from the Bible and all the titles of its sixty-six books in order from Genesis to Revelation. But in the Pentecostal church, the names of God were not considered mere facts to be studied and recited. No, instead they were oaths on which to stake one’s very life, promises he had given on which one could depend. Alpha and Omega, The First and the Last, I Am That I Am, The Beginning and the End. Preachers thundered them from the pulpit and singers invoked them from the stage in song, releasing a storm of emotions—hope, fear, wrath, awe—that swept through the crowd.

He is Jehovah, one of our singers, a flame-haired alto, boomed in a voice as vibrant as her tresses. Over a rapid backbeat and a tune dominated by minor chords, she flung a list of names across the congregation—Lord God Almighty, The Balm of Gilead, The Rock of Ages—along with Hebrew titles from the Old Testament: Jehovah Shalom, the God of Peace; Jehovah Jireh, the God of Provision. And then she returned to where she had started: He is Jehovah, the God that healeth thee.

A promise. Jehovah Rapha. Of all his names, this was the one I clung to the most. God the Healer. I sang along as I played, my fingers bounding and contorting over the keys, praying that he would make good on his word.

hat if God was one of us? More than the question she asked, I found Joan Osborne herself threatening when I first saw her iconic video on MTV. She was unabashedly herself, comfortable in her own skin, something I was not. I worried about how I walked, how I talked, how I laughed, how I dressed—normal teenage angst, one might say. But I had long since been put on notice that, try as I might to hide, people knew who I really was. And that it was unnatural, an abomination. I needed to police myself, deny myself, change myself. I needed the deliverance that only God could provide. This “slob” and “stranger” she sang about could not offer that. He could never be reduced to those lowly identities, of that I was certain. To even entertain the notion was near to blasphemy.

She looked like a radiant heathen—glorious, I see now, with her wild waterfall of blond corkscrew curls and a prominent nose ring that looped around her right nostril. But back then—back when I was burying an essential part of myself down in my soul’s hidden crevices—all I could see was worldliness and carnality. I had no idea that, like me, she was from a small town in Kentucky. She seemed so of the world—intelligent, liberal, and gamine, reveling in her pulsating sensuality while singing about God.

But her God was not anything like mine. I knew this from the lyrics, which were everywhere—on the radio, on MTV and VH1, on the lips of nearly all my friends in high school. The song started promisingly enough, sampling an old Alan Lomax field recording of a mountain tune titled “The Aeroplane Ride” that warned of impending judgment. This old world’s gonna reel and rock, warbled the Pentecostal singer Nell Hampton from Salyersville, Kentucky, in a worn voice, before the song transitioned to include the twang of an electric guitar, the steady tap of a high-hat, and then Osborne’s rich, textured voice. Written by her songwriting partner Eric Bazilian, “One of Us” posed a simple, childlike question that, to quote Rolling Stone on Osborne’s delivery, “astutely conflates the sacred and profane”: What if God was one of us? / Just a slob like one of us.

But the God I served could not be reduced to the status of a mere mortal, stripped of his divine powers. After all, he would then not be big enough, powerful enough, to do what I had been promised he would do—solve my problems and cure me of the secret affliction I was fighting with every ounce of my thin body.

I f God had a name, what would it be? Although I no longer have a taste for undignified religious ecstasy, I have retained my love for divine mystery. And as anyone recovering from a fundamentalist upbringing surely knows, I am still learning to love the questions themselves rather than the answers, as Rilke tells us in a passage from Letters to a Young Poet that I hold sacred.

Yet the grand names ascribed to God continue to enthrall me with their splendor, solemnity, and enigmatic layers of meaning. I have long since added two less formal terms to my vocabulary: slob and stranger. I think on them sometimes as I sing my favorite hymn, “Guide Me, O Thou Great Redeemer,” from my pew in an Episcopal church, which has become a welcoming spiritual home for my searching heart. Pilgrim through this barren land, reads Peter Williams’s eighteenth-century English translation from the original Welsh, a line that seems to capture my own journey and that of the narrator in “One of Us.” Like her, I have been trying to make my way home.

I am still enough of a believer in the mystical to consider that “One of Us,” the song I had rejected, was in fact some sort of prophecy. It had initially seemed as foreign as one of the tongues I encountered in that Pentecostal mountain church, but by my early twenties, when I had given up on changing who I was—who I had always been—I was finally open enough to receive the translation in plain English. With Joan Osborne as my interpreter, I listened to the song with ears that no longer rang with threats of hellfire and eternal damnation, and I fell madly in love.

Here is what I heard: that questions are welcome, that revelation comes from secrets. That there are traces of God in all of us, that doubt is an essential part of faith. That art is but another of his many names. That the greatest songs—the greatest art—often offer a challenge, and it is up to us to accept it. Mine was that I had to embrace and become what I once most feared: a doubter, a believer, a searcher, a gay man, a lover of this world.

Years after I discovered the beauty in “One of Us”—and in the rest of Joan Osborne’s musical catalogue—I interviewed Osborne for a book I was writing on Kentucky musicians. We spent three hours together, sharing spicy lamb, hummus, and mint tea on a humid May evening in the courtyard of a Mediterranean restaurant in Brooklyn. We spoke of our shared love of Walt Whitman, of the spiritual nature of urban life, of her transition from small-town Kentucky to New York, from a strict Catholic upbringing to a spiritual practice she defines simply as “compassion.”

But I never told her of my own backstory and how it intertwined with her most famous song. I never told her how “One of Us” had challenged me, how it helped me to love the world below and all its charms as much as the one above. I never told her how, after we had parted, I took the subway back to Manhattan and, looking around the car at my fellow slobs and strangers, I saw all the shining faces of God.

Jason Kyle Howard is the author of A Few Honest Words: The Kentucky Roots of Popular Music and coauthor of Something’s Rising: Appalachians Fighting Mountaintop Removal. His work has appeared in the New York Times, the Atlantic, the Oxford American, Salon, the Nation, the Millions, Utne Reader, and on NPR. He directs the creative writing program at Berea College and serves on the faculty of Spalding University’s Naslund-Mann Graduate School of Writing.