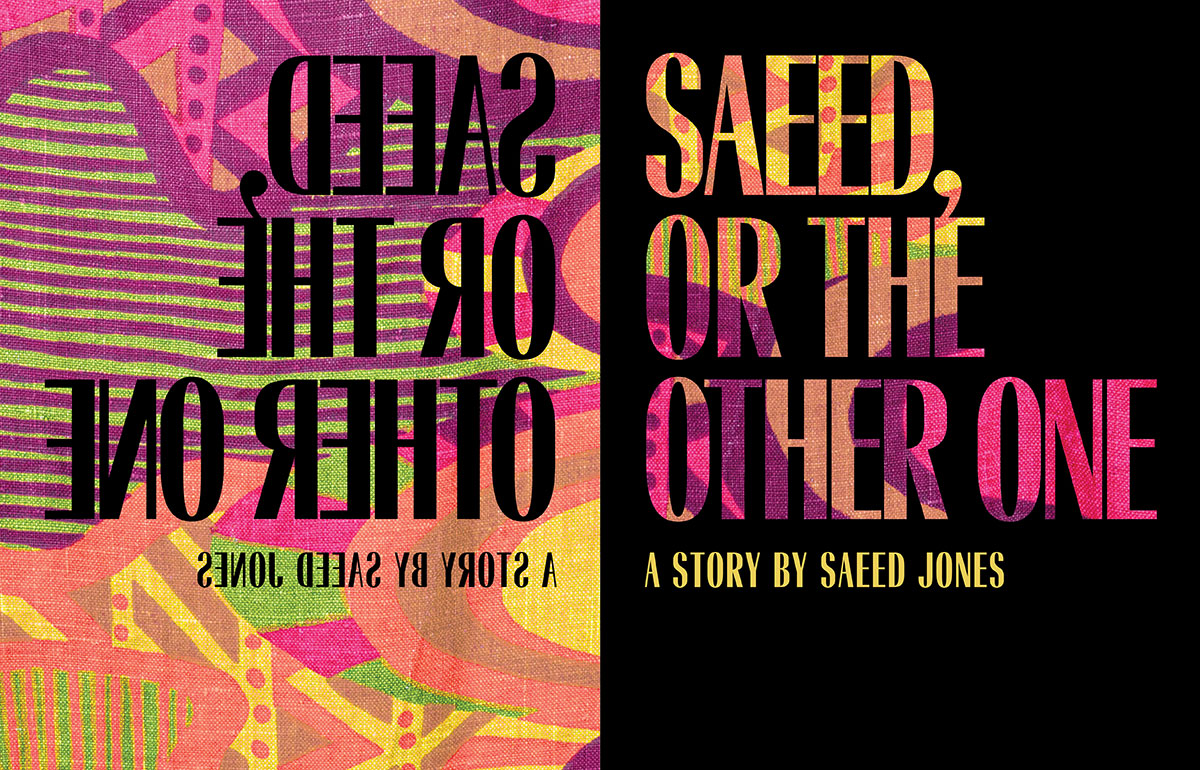 Saeed, or The Other One

Excerpted from "Alive at the End of the World"

It started as a joke. The last word from the night’s last poem left my mouth and someone in the audience already had his hand raised. From the way he outpaced the applause, insisting on keeping his hand in the air while everyone around him clapped, I knew that—however it might be punctuated or phrased—his question was not going to be a question.

“Oh, honey,” I answered in a voice that was mine as much as it wasn’t, “you’ve got it all wrong. My pain needs me.” And then I did that thing I do with my eyebrows and the muscles around my mouth and the angle of my neck that says “trust me, whatever you think just happened, that was a joke.” And the audience laughed.

The man stared at me blankly as if we were alone on a date and I had just disappointed him with my opinion on threesomes or food allergies. I ignored him and tossed out a couple more quips to buy myself time because I’ve met men like him many times before and many times since, and those bastards really will wait you out for the answers they believe they deserve.

Now that everything that happened has happened, I can tell you that, honestly, it wasn’t a bad question. It might have even been a good one, but sometimes you just don’t like the outfit the question is wearing. Sometimes you don’t even want good questions. Sometimes you realize, thirty or forty minutes too late, that you’re not the person everyone in the room seems to think you are, and the right question asked in the wrong way by the right-wrong person could bring you to your knees right there on that empty stage. Sometimes you just want to go back to your hotel room and sleep or pretend to sleep until it’s time to go to the airport and you can go home. Anyway, eventually I “answered” his “question” and then the audience and I decided to move on with or without him. Our various nights were waiting for us just outside that room.

I really do think it was the joke. But it could have been how much I wanted to pop the white balloon of his blank stare. Or maybe it was the brief panic I felt and killed behind my eyes every time he said the word “pain.”

The thing about those questions is that they follow you home. I was on the phone with my editor later that week, venting about that guy’s question and all of that question’s siblings when I unlocked my door and dragged my suitcase into my apartment. Just before I reached for the light switch, I saw what looked like a dead body sprawled on the couch and I screamed and dropped my phone because that’s exactly what we all do when we find dead bodies waiting for us in the dark in our living rooms after business trips.

“What’s wrong? What’s going on?” my editor yelled from the floor, but it was too late. I had already turned on the lights and there it was, a me that wasn’t me, wearing my clothes. It looked up at me then, and I screamed so loud I started coughing.

My editor was screaming now too and, without taking my eyes off of whatever the living fuck was on my couch, I stooped down, sputtered some excuse about stubbing my toe, and hung up on her. While trying to stay as far away from the couch as I could while still being in the room, I looked him over, trying with mixed results not to scream or jump every time he blinked or took a breath.

To calm down, I settled in a far corner and limited myself to quick, darting glances. I realized he was doing the same thing and it started to feel silly: me in the corner of my living room and me on the couch in my living room, taking turns pretending not to be inspecting my selves. Soon, it was silly enough that I started to forget how terrified I had been just a few moments ago.

I heard myself think, “I would never hurt me,” and he nodded because—I realize now though it didn’t quite register in the moment—he was thinking the same thing. That’s when I finally sat down on one of the chairs across from the couch. He smiled, impish and pleased, and I realized just how much I like my smile. I mean, I’ve always thought I had a good smile. It feels good and it looks good, but seeing him smiling with my smile made me happy in a way I had long forgotten I was capable of. It felt like being instantly unburdened of the memory of two and a half griefs. That amount exactly.

Now, I still wasn’t ready to talk, but, feeling less afraid, I straightened my posture in the chair. He looked like the idea of myself coming into focus. At first, if you had asked me, I would’ve said he looked like a white policeman’s description of me. Then I blinked and he was a black policeman’s description of me. Another blink and the me on the couch sharpened into a resemblance that could fool the neighbor who lived across the hallway, or the barista I saw most mornings at the coffee shop on the corner. Another blink and several aunties at my family reunion would’ve called him by my childhood nickname and happily fixed him a plate. We went on like that in a calm silence; I looked and he became. Before long, the differences between us were so subtle, I began to doubt their existence almost as soon as I noticed them.

That’s when I took a breath and said, “Well, um, hello there,” or “I guess I should say hi.” I can’t remember exactly because I was too distracted by the way I could feel the words leaving my mouth, one syllable at a time, drifting across the coffee table toward him. It’s too dramatic to say that he ate them, but from the way he softly repeated my words, trying them out in the pause after I spoke, I believe that he couldn’t actually speak until I first spoke to him. It was unnerving and then it wasn’t. Something about being in his company—our company—had a way of immediately smoothing over rough edges as soon as I got to them. Just when I’d think, “Well, that was weird,” I’d think, “What was?”

“Where did you come from?”

“I was hoping you would tell me.”

“No, I do. I just—do you remember anything before I walked into the apartment?”

“I remember you saying that I needed you.”

“Yeah. Anyway, I heard it and came to find out why. Why do I need you?”

The questions stung but never hurt. What hurt was how difficult it was to answer them, even alone in the warmth of our company. I don’t know how long we sat in our living room, going back and forth. At some point, I poured us some wine, then whiskey. We got sushi delivered but barely touched it. We just couldn’t stop talking.

I’d answer his questions and then try to actually answer them and fail, and then it would be his turn. We really tried to get to the truth of my selves. But no matter how many ways we approached the subject, we always ended up standing on its front lawn, confounded and without a key. I didn’t know why he needed me, just that he did. And the feeling was mutual. A white man in the audience with a white balloon of a blank stare had asked me about my pain and there it was, an urgent tug in the ether. A call and response inside the church of us.

The sky changed color and we paused to look at it, both a bit puzzled because we couldn’t tell if we were looking at dawn or dusk. I picked up my glass, and just before I brought it to my lips, I felt the sob coming a moment too late to stop it. I cried so hard I didn’t even notice how gently he had taken the glass out of my hand. I didn’t realize he had crowded into the chair with me until I felt his arms wrapped around me. He kissed me on my wet cheek, and I laughed because I didn’t know what else to do.

It’s possible I had been sputtering out my thoughts the entire time, but, feeling a little more coherent now, I started talking and didn’t stop until I was nearly panting because I needed him to know that I had wanted to cry that night onstage. And it wasn’t the man’s question, really. Well, it was, in a way. It’s just that I had been in the woods for so long and then I came to that man’s question and it was like a clearing. A little sunlit field overrun with tall grass and all kinds of wildflowers I used to be able to name. And I could’ve done anything in that clearing. I could’ve danced in wild, erratic circles, or gathered flowers for a crown, or lain down and rested, or yelled out the names of everyone I loved and missed. I could’ve marched right into the middle of that field and listed my hurts one by one until I was free of them. Anything. I could’ve done anything. But instead, I turned around and went back into the woods. That’s what I always did. I went back into the woods.

My words blended with the brightening light drifting in from the window. I paused then, unsure if I had been talking or thinking. He nodded as if to say yes. And it felt so good being known, I almost cried again.

“They want to see me in that clearing. Maybe they think I need it or they need it or maybe they just want it,” I said finally. “But I don’t want to go out there for them.”

We sat in silence, both tired and a bit relieved. And then, mushed into that chair as we were, his cheek was still against my cheek, and I felt the muscles in his face moving the way they do when we’re about to make a joke.

“Well,” he said, gently feeling his way into the set-up, “I could be you out there, for a little while. I mean, I’m pretty good at it.” I chuckled, and we slid back into silence, already picturing him onstage with my words in his mouth.

Saeed Jones is the award-winning author of the memoir How We Fight for Our Lives and the poetry collection Prelude to Bruise. His next book of poems, Alive at the End of the World, will be published by Coffee House Press this September.

On Masculinity, The Power of the Word, And Finding Zion