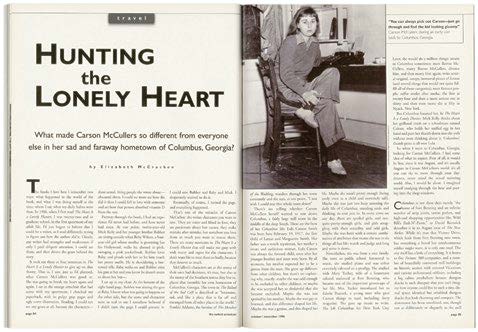 Editor’s note: “Hunting the Lonely Heart” the essay to which this piece is an addendum, appears here.

Reading, like writing, is a situated enterprise, Elizabeth McCracken’s essay reminds us. It cannot be unknotted from the circumstances in which it occurs. In this way, to read and to write are just like remembering. What you see depends on where you’re standing, and how you see yourself standing there. I’m writing this introduction from a beige sofa in Birmingham, Alabama, and a blue one in Sarasota, Florida, practically the only places my partner Chelsea and I have traveled in the past two years, to visit our parents. Our remaining parents, as my mom died unexpectedly last August. All we do now is return to the South. I remember when my mom picked out these blue sofas, worried they would be too bright or too bold. The sofas look delightful, as do many, but not all, of her decorative choices surrounding me in this, the house she moved into two years before she died. It’s a strange and hopeless and tender endeavor, searching for someone in the place they’ve unquestionably vacated.

I first read “Hunting the Lonely Heart” in 2015. I’d been looking for it for some time, while at work on a book about Carson McCullers. I was determined, for reasons unclear even to me, not to speak to anyone who knew her, and yet I read everything I could find that had been written about her. I’d seen several references to McCracken’s essay, but it wasn’t available online or at my university’s library. Chelsea knew this, and being an excellent researcher, better than I, tracked down a physical copy of the magazine, ordered it, and gave it to me for our first Christmas. At the time I didn’t fully understand the romance of this gift.

In hindsight, I suspect I had wanted to write my book without speaking to people who knew Carson because everything I’d read about her seemed to be colored by others’ accounts. I was trying to find a first-person account, to hear her own version and somehow bring that to the page. McCracken, meanwhile, talked to everyone she could in Columbus, any living person who had known Carson or met her at a party. In McCracken’s essay, I found voice after voice who remembered Carson McCullers in their own way. If McCracken had written the piece differently, taking each at their word, allowing them to carve the shape of her Carson, this essay would have been of no more use to me than anything else I’d read: gossip turnedgospel, vague, mistaken, and deeply biased reminiscences made incontrovertible fact.

But McCracken’s view insists on context. She tracks her delight and interest in each person’s new set of stories about Carson, only to dismiss them all in favor of her own imaginary version. A version she sees sitting in a theater seat, looking out the newspaper office window, loitering in doorways. A version who reflects McCracken’s own life at that moment, weeks before publishing her first novel, a singular, wonderfully McCullers-esque love story between a giant and a librarian. And who reflects her life when she encountered McCullers’s fiction, sitting in an orange armchair in her first apartment, trying to see herself as a writer. In Columbus, she fancies that she would have understood Carson betterthan any of these actual acquaintances. She allows other people’s details to inform what she sees, while never forgetting that what we see is always our own creation. What we see when we look at an author, or a character, or, as Carson knew, too, when we look at another person. We can never quite see them clear. We are always the lover, making the beloved our own. Even when we look at ourselves.

Or when we look at a town. McCracken’s experience of Columbus, teeming with hilarious residents, couldn’t have been more different than mine. She visited in August 1996, twenty years before I went, and she dined with a local historian, toured the Springer Opera House, poked around in Carson’s old haunts. In the article, she has a guide with her wherever she goes, tracking McCullers’s historical movements and the town’s reactions to them. When I went, in February and March of 2016, itwas damp and cold and sodden with pollen. I rarely left Carson’s home, where I was staying. I met almost no one, which was my own doing, a self-prescribed loneliness.

In her unfinished autobiography, Carson writes that as a child, she “yearned for one particular thing; to get away from Columbus and to make my mark in the world.” After she found her way to New York and published her beloved and critically acclaimed first novel, she returned home frequently, only to be rejected by her neighbors in Columbus. Who did she think she was, wearing pants, smoking cigarettes, typing on a typewriter all day? Underneath these superficial critiques lurked a deeper unease with her work, which from the beginning addressed race relations in the South, white supremacy, queer love, and the life of the outsider. If Columbus for Carson—for Carson as I imagined her—was isolated, lonesome, even hostile, it seems I was determined to make it the same way for me.

What remains of the historic downtown, the buildings that Carson would have seen and known, made little impression on me—perhaps because I didn’t know for sure which those were, and I wasn’t going to ask anyone. I was struck by the strip malls, the fast food, the way her house and her street, historic as they are, could have been anywhere. I tried to find her by walking in the neighborhood, past her old school, through the park called Little Wildwood that she loved. I even soaked in her pink bathtub, but Carson was nowhere to be found. Instead, I conjured her in my own head, in my own heart, in the troves of letters and therapy transcripts at the Columbus State University Archives. Columbus itself felt not like a ghost town, but like a too-trafficked suburb of a nonexistent city. I knew that the town she lived in was inaccessible to me, papered over with drive-thrus and supermarkets, yet I couldn’t help but imagine her navigating these, too, wheeling a cart through a car-littered parking lot under a close gray sky.

McCracken’s essay showed me that you could have it both ways. You could be righteously suspicious of anyone trying to make a clear alignment between the fiction and the life, or to map the life onto the fiction, while also indulging the fantasy, relishing it, living it, making it your own. That indeed there is no other option.

Jenn Shapland is a writer living in New Mexico. Her first book, My Autobiography of Carson McCullers, was a finalist for the 2020 National Book Award and won the 2021 Lambda Literary Award. Her essays have appeared in New England Review, the New York Times, Outside Online, Guernica, and Tin House. Her second book, Thin Skin, will be published by Pantheon Books in 2023.