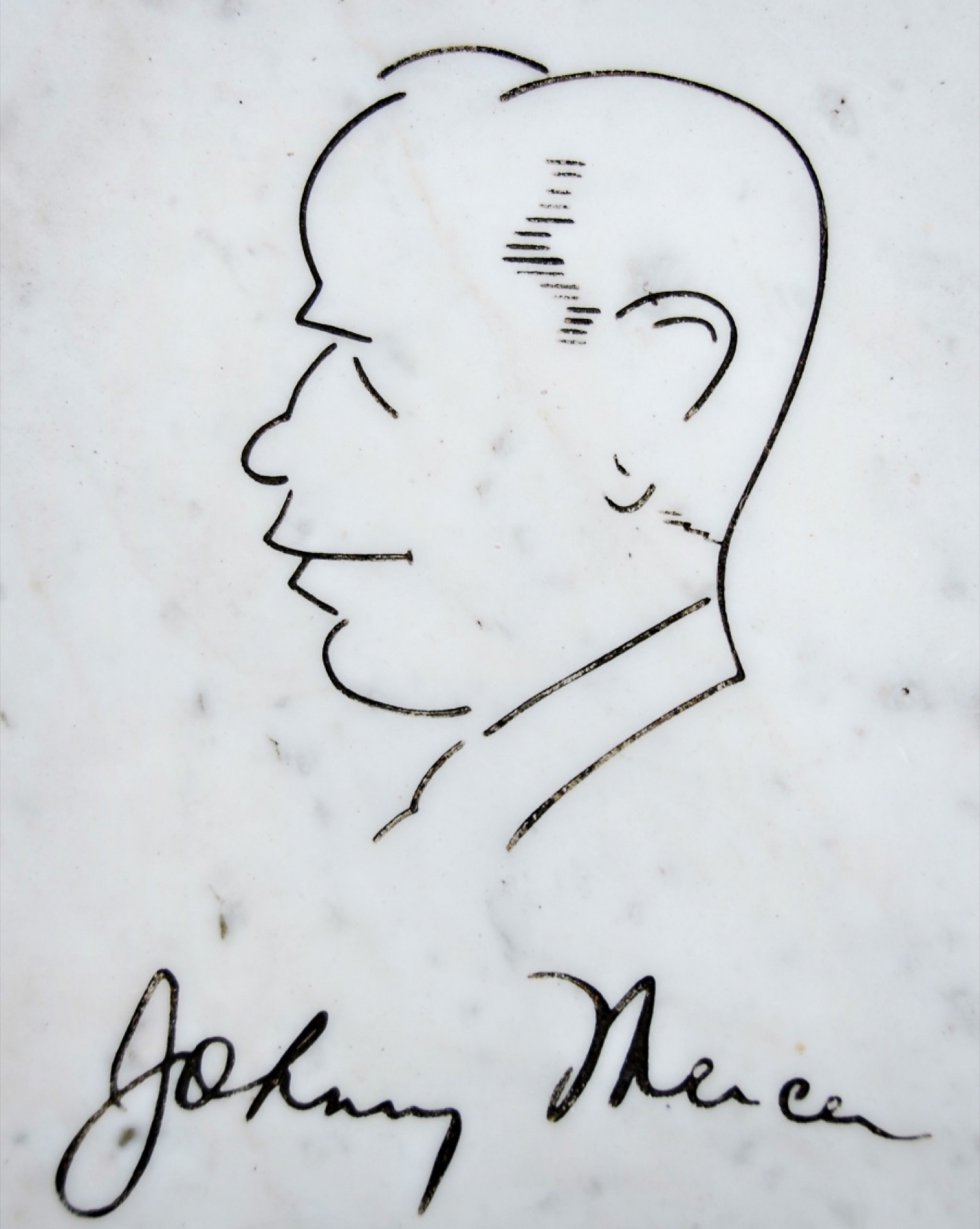 Drawing and signature of Johnny Mercer from a bench at his grave site in Bonaventure Cemetery in Savannah, Georgia.

The Blues and the Gray

An installment of Roy Blount Jr.’s long-running OA column, “Gone Off Up North”

Do you ever have a sense that it’s all coming together? In calling it “it,” of course, we are presuming that it’s already together, in principle; we just have to apprehend it. When you’re in love you feel like you’ve got it, then you realize she doesn’t eat meat or something, which doesn’t mean it isn’t love—it may even make you a more holistic person—but there’s no sense kidding yourself, there aren’t going to be any sausage patties in it. And if you’re the kind of person who always has a sausage patty somewhere in the back of his mind. . . .

My friend James Seay wrote a poem, “It All Comes Together Outside the Restroom in Hogansville,” in which the poet looks through a hole that someone has presumably made for peeking into a gas-station restroom. But the poet peeks out. He sees pretty much the sort of vista you might expect from that viewpoint, a guy working on a car and so on, but you get a lot more depth of field looking out than looking in, and there’s something about the way it’s framed. . . .

But if you think what comes together is peace of mind, you haven’t been reading the right kind of poetry. Perhaps you would like it if that probably foul-graffiti-covered restroom were suffused, all of a sudden, with soft, effulgent light as choreographic angels sang:

Don’t hold your breath. The world we know, let’s face it, is not what we have in mind. Sometimes, though, we may get an inkling.

Recently in New York I was at dinner with several artistic people. One of them asked if the rest of us ever experienced (as she did) “moments of brilliant clarity,” in which the course of things for the foreseeable future became clear. Each of the others said oh, yes, and described such a moment. One spoke of giving up sculpture for dance. Another spoke of realizing in a flash that she would move to Rome and meet someone with whom she would have two children, both of whom would have trouble in school, but. . . .

I said no. (What I didn’t say, having learned better over the years, was that I didn’t believe they had either.) The other day, though, I did get a whiff of eureka. I was reading Attack and Die, by Grady McWhiney and Perry D. Jamieson, which argues that the Confederacy was brought down by the tendency of Southerners to fling themselves gallantly (as it seems to Southerners), or dumb-assedly (as it may seem to others)—at any rate, more high­spiritedly than advisedly—at the foe. I came upon this passage:

Available evidence suggests that the Rebel yell was a variation on traditional Celtic animal calls, especially those used to call cattle and hogs and hunting dogs. “Who-who-ey! who-ey! who-ey!” is the way one man remembered it, with “the first syllable ‘who’ short and low, and the second ‘who’ with a very high and prolonged note deflecting upon the third syllable ‘ey.”’ One thing is clear: it was totally different from the Yankee “cheer” that repeated the word “hurrah,” but pronounced it “hoo-ray,” with emphasis upon the second syllable.

So the Yankee cheer was simple and up­beat, and is still around today. The Rebel yell was complex and bluesy, and is lost to history. (Except in a faint and, if I may say so, highly unbloodstirring version offered by a Confederate veteran near the end of the Ken Burns documentary, in footage from the fiftieth anniversary of the battle of Gettysburg. The old man’s yell goes, roughly, “Whuh-huh-wooo-ooo! Whuh-wooo-woo­-ooo!”) But here’s what really pricked up the ear in the back of my mind: how much “Who-who-ey” resembled . . . something in some great Southern song.

It hit me. I quote from Will Friedwald’s piece in last year’s Oxford American Music Issue:

In “Blues in the Night,” Mercer had introduced a “sound effect” (the famous “a­hooey-da-hooey”) with the line “hear that train a-callin’.”

Aha! Not quite the same, but . . . could it be that Johnny Reb was imitating a train? No. Could some ghostly influence have inspired Johnny Mercer, all unknowingly, to preserve something very like the Rebel yell? No. But there did seem to be a connection here between the blues and the gray.

And maybe . . . could I have stumbled upon the figure in the carpet of all human culture? A thread linking the Arkansan “Soooey Pig,” the Jewish oyoyoy, the British hear ye, the Latin aiyiyi.

I thought of “What’s Your Name,” the only major hit by the Brooklynite duo Don & Juan:

Oo-ee, oo-ee baby,
Won’t you let me take you on a sea cruise?

Who wrote “Sea Cruise”? Huey (Piano) Smith. I thought of Donald Duck’s nephews, Huey, Dewey, and Louie (that’s the American language for you, three different ways of spelling “ooey’’). And the album known as Complete and Unbelievable—The Otis Redding Dictionary of Soul, whose liner notes include a glossary, defining such terms as “ou-yea: to give in; a reply to get what one wants,” “ou-ni: to hurt so good,” and “ou we ni: getting gooder by the minute.” Johnny Mercer also wrote “Hooray for Hollywood,” whose opening rhyme is “screwy” and “ballyhooey.” But let’s go to our basic text.

According to Our Huckleberry Friend: The Life, Times and Lyrics of Johnny Mercer, by Bob Back and Ginger Mercer, which is the closest thing there is to a biography of Mercer, Harold Arlen’s tune to “Blues in the Night” came first, as was almost always the case when Mercer collaborated with a composer. The book reproduces Mercer’s handwritten draft, annotated. His original opening was “Whenever the night comes/I’m heavy in my heart. . . .” Arlen recollects that he scanned several other phrases Mercer had jotted down until “I saw those words, ‘my momma done tol’ me,’ way down at the bottom, and I said, ‘Why don’t we move this up to the top?’” Inspired choice, but more to the point of my search was that Mercer wrote down the train sound like this:

Simpler to have spelled “hooey” as Friedwald did. Yet Mercer put in the w. So did the man quoted in Attack and Die. Makes you wonder whether there was not, in the Rebel yell and Mercer’s sense of the blues, as well, an element of “Who we?” (No, not “Duh, who we?”)

Maybe that’s just American culture. A barely stable compound of “Who we?” and hooey. Maybe that’s what caused the Civil War—each side saying, “Here’s who we are,” and each side replying, “Hooey.” Note that “Blues in the Night” is cleverly worded so that either a man or a woman, with minimal adjustments, can sing about how two-faced the other gender is.

Johnny Mercer, say people who knew him, was a lovely, lovely man but a mean drunk. Hey, he hung with Billie Holiday, which is more than I can say. I would love to have done the work he did (just to have written “Glow Worm”!), but if there is anything a shade irritating about his mellifluous-yet-friendly singing accent, it is that he seems to be rather too comfortably putting on a tinge of minstrelish blackness. His lesser contemporary Phil Harris could rip through a nominally embarrassing number like “Darktown Poker Club” with no condescension in his tone of voice, but a rude whimsicality discolors several otherwise enjoyable songs in which Mercer refers explicitly to the African ­American roots of swing. Check out “Mister Meadowlark,” “The Waiter and the Porter and the Upstairs Maid,” and “The Old Music Master.” That last number is a duet sung by Jack Teagarden, as a classical composer of the nineteenth century, and Mercer, as “a little colored boy’’ from the twentieth, who startles the old composer by singing, “You got to jump it, Music Master,/You got to play that rhythm faster.”

And in “Mr. Crosby and Mr. Mercer,” Crosby sings:

Swing is really just too ancient to condemn—
In the jungles they would play
In that same abandoned way.

On the level Mr. Crosby?

It’s meant to be duly integrative, but does it take sufficiently into account that Louis Armstrong (whom they both worked with) might be listening? And asking himself, “Can it be that these cats think I’m the novelty act?” Arthur Schwartz—the eminent composer of “Dancing in the Dark” and many another standard—is quoted in Our Huckleberry Friend as declaring that “Blues in the Night” is “the greatest blues song ever written, and that includes ‘St. Louis Blues.”’ Hooey. He must have thought “Love in Vain” and “Trouble in Mind” were cave paintings. No wonder Elvis blew those old guys away. It’s a miracle of American dissociation that Robert Johnson didn’t twenty years sooner.

Surely Mercer himself, being Southern, realized that “Blues in the Night” was a terrific popular song, but the greatest blues song? It took Yankees forever to realize that the blues were more primary than Tin Pan Alley. You’ll still hear them calling Frank Sinatra the greatest singer—with Ray Charles right there all along. Get it together, North.

But listen to me talk. I have assembled momma, the oral tradition, trains, lonesomeness, the blues, the Lost Cause, Natchez, Mobile (“from Natchez to Mobile, from Memphis to St. Joe . . .”), hogs, and dogs. And what have I got? I haven’t even addressed the issue of how the Wh in “Who­who-ey” was pronounced. As an h, as in the word who? Or as hw, as in the word why? The latter is the sound I was going for in attempting to phoneticize the old man’s Gettysburg reunion yell. But that can hardly have registered on those readers who pronounce the wh in why as a w, which I have always thought of as an odd (Northern?) form of h-dropping. It, whatever it is, is a far cry from all coming together.

I’m not saying it’s not out there somewhere. On a CD entitled An Evening with Johnny Mercer, he has this to say about lyric-writing:

It’s elusive. It’s like you’re going out looking for the Snark, or something you never heard of, the Golden Fleece. Cause you don’t know where it is, it’s up there somewhere and you can tune in on it, and you get a little glimmer, and you say, ahhh—you don’t even know if it’s a word, and then it’s like you’re tuning in to a musical instrument that’s miles away, and you say, “Oh yeah, there’s something there, if I just dig hard enough, I know it’ll come.”

Then he sings “Blues in the Night.”

Roy Blount Jr. is the author of twenty-four books, about everything from the first woman president of the United States (back in 1992), to what barnyard animals are thinking. He is a panelist on NPR's Wait, Wait...Don't Tell Me, ex-president of the Authors Guild, a member of PEN and the Fellowship of Southern Authors, a New York Public Library Literary Lion, a Boston Public Library Literary Light, a usage consultant to the American Heritage Dictionary, and an original member of the Rock Bottom Remainders. He comes from Decatur, Georgia and divides his time between western Massachusetts and New Orleans.