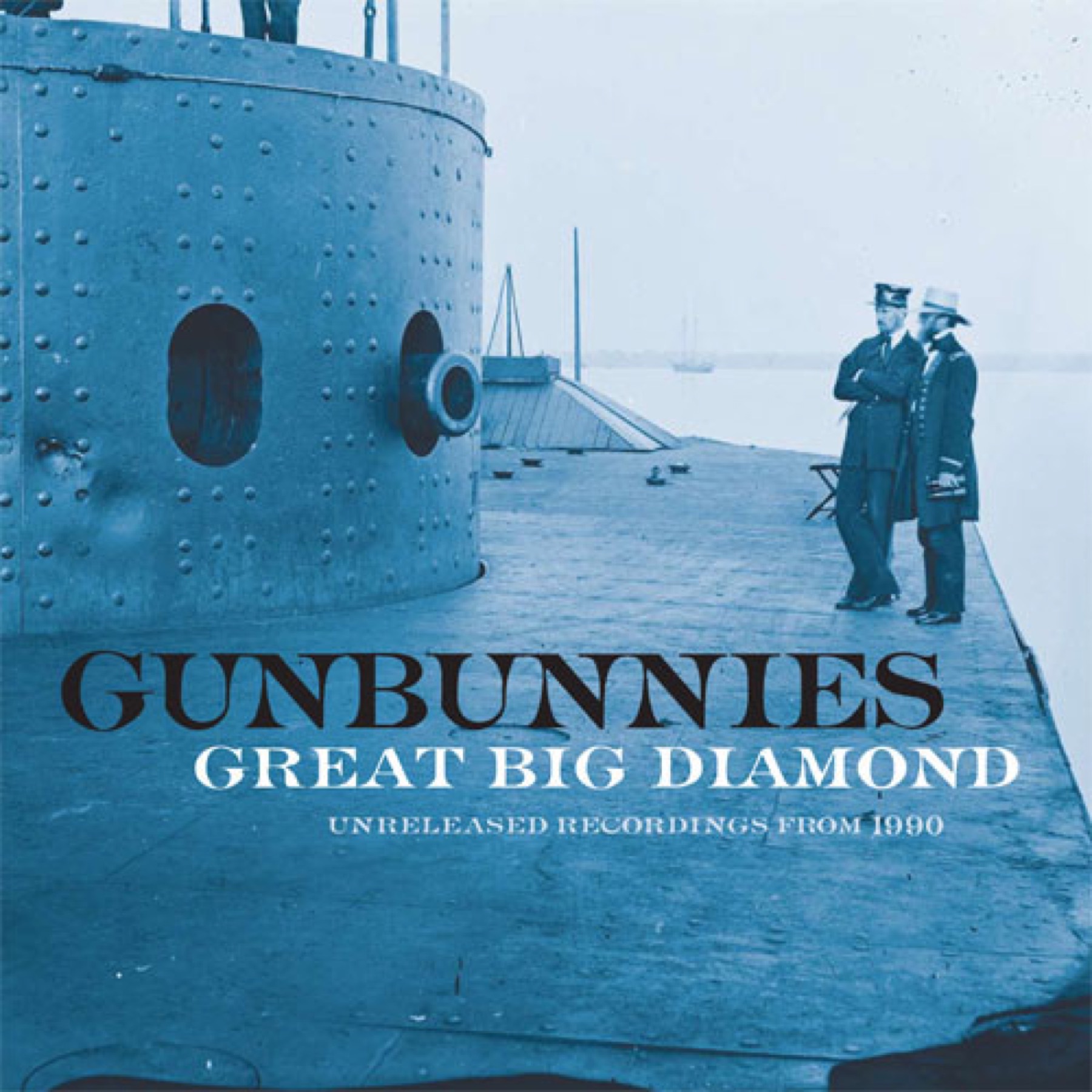 I’ll come clean: Two weeks ago, I’d never heard a Gunbunnies song. I knew you guys were an alt-rock band out of Arkansas, knew you’d just released an album called Great Big Diamond, but otherwise I was tabula rasa. I downloaded the album, threw the tracks onto my iPod, and headed out for a long run to hear some ’bunnies. (Is it just me, or does the image of little burrowing mammals wielding pistols have a perverse charm?)

What happened next: I fell in love. Big hooks and grinding guitar lines, forward driving drums, strong vocals with Kinks-esque harmonies, and an upbeat, feel-good vibe belied by darkly poignant lyrics. And your sound…a palimpsest: mid-period Beatles under Elvis Costello under The Ramones and The Replacements under R.E.M. Not since I was sixteen and first heard The Joshua Tree had I felt this excited about a musical discovery. (Never mind that every other girl wearing Guess jeans with ankle zippers had beat me to U2.) I pictured myself at a Gunbunnies gig, at the foot of the stage, performing indescribable acts of ’80s hair-flipping dance freakery, lighter aloft. Okay, cellphone “lighter” app aloft.

At mile three, I turned around and ran a hard sprint home to Google your tour schedule, and—hold the phone—Great Big Diamond is a demo album? Recorded for Warner Bros. almost twenty years ago but never released till Max Recordings, a Little Rock indie label, put the record out this past August?

So here’s where I attempt to convince you and your band—guitarist David Jukes, drummer Dana Myzer (or your previous drummer, Jud Martindale), and bassist Brent Smith LaBeau—to reunite in Little Rock at the annual Riverfest celebration in May and, shortly thereafter, record a new album.

Seven reasons The Gunbunnies should reunite and, shortly thereafter, record a new album:

1. Because no one should pass up a chance to tell Warner Bros. to shove it.

I mean, you guys were on the cusp. CMJ’s Best Undiscovered Band in 1986; signed by Virgin Records in 1989 to cut an album with the legendary producer Jim Dickinson (also from Little Rock). The resulting record, Paw Paw Patch, was an instant hit. In 1990, according to former Spectrum editor Stephen Buel, The Gunbunnies were the toast of the South by Southwest festival. (By the way, that was you on vocals, guitar, harmonica, trumpet, and electric sitar? Dude.)

Then things started to unravel: Virgin’s New York offices went under, along with your supporters at the label; you continued to tour until someone at Warner Bros. caught wind and signed you to a development deal—only to pass on the demo (which, in my opinion, was light-years beyond the somewhat sterile Paw Paw Patch recordings), saying, “We already have Elvis Costello and The Replacements and don’t need another.” Even I want to fly to Burbank, accost a Warner Bros. executive, shove a pair of headphones into his ears and blast “My Last Words”—you can te-hell the truth, without it bein’ true—all the while flippin’ him the bird.

2. Because your lyrics are intelligent—and eerily prophetic.

If there’s a defining mark of pop culture of the past decade, it’s the burgeoning of black comedy—heavy or tragic subject matter shot through a rose-colored lens—and the black comedy of Great Big Diamond is one reason it was so far out of the gate the rest of us are only now catching up. Beneath the surface buoyancy are interrogations, usually direct addresses, dealing with some type of failure—in communication and relationships, as in the dizzying “Every Word You Say” (“I said they say they say what they mean, they mean to say, they mean nothing they say”) or “My Last Words” (“My last words, they folded in praying hands around your throat”); in faith and religion (“I’m backsliding in somethin’ I don’t wanna see”); and in the small town way of life (“Walmart came in and broke the town spirit in two”—from “Water Tower,” the album’s standout track). “Coming Down Fast” nails addiction (“Everybody’s got a fear they feel comfortable near…. I’m swallowing air to keep from drinkin’”). And then there’s “Fall Between the Cracks,” which sounds like it was written to Warner Bros. after they rejected Great Big Diamond: “You say the color doesn’t sound quite right, the sound I make doesn’t look too tight...why fight over the intangibles I lack?”

3. Because even your commercial work is brilliant.

When I read that you’re working as a “jingle writer” at a production company called Elegant Too (with partner Phil Hernandez), I was skeptical. That’s where this talent winds up? Then I listened to some of the clips in your portfolio. Holy Clio, Chris—these ain’t no jingles. The Sopranos, Comedy Central’s Michael and Michael Have Issues, sound design for the Sundance Channel, ESPN, Smirnoff… Imagine what you could be doing with the reunited Gunbunnies. You know, your true calling.

4. Because who doesn’t love a good consummation story?

Let’s be honest: The reason David Copperfield and Persuasion and Love in the Time of Cholera are classics isn’t their so-called aesthetic import or universal appeal. It’s because we have to wait a long, long, long time between the promise of sex and the sex itself. Great Big Diamond is the promise, and it’s been twenty years, and if you put out a new album now it will be like…you know.

5. Because post-Clinton Little Rock deserves it.

The Gunbunnies were the first band from Little Rock—ever—to step into the national spotlight with a major-label record deal. Great Big Diamond should have been the sophomore release that signaled to the world Little Rock’s arrival on the national music scene. Then the whole Warner Bros. thing went down….

6. Because hair that good deserves a redux.

I watched your old “Stranded” video on YouTube. Not since Gene Wilder’s flyaway curls quivered while he sang in that wacked tunnel on board his Oompa Loompa–powered boat have I experienced such hair related performance thrills. I know you’re older, and things tend to happen at the browline, but the world needs a second look.

7. Because small children need you.

You can’t let these kids down, man.

I know you won’t disappoint me, Mr. Maxwell. Let me know when this Riverfest gig happens. I’ll be the one in the front row with the real lighter.

Jamie Quatro is the author of the story collection I Want to Show You More and the novel Fire Sermon. Her work has appeared in the Kenyon Review, the New York Review of Books, the New Yorker, the Paris Review, and elsewhere. She lives with her family in Chattanooga.