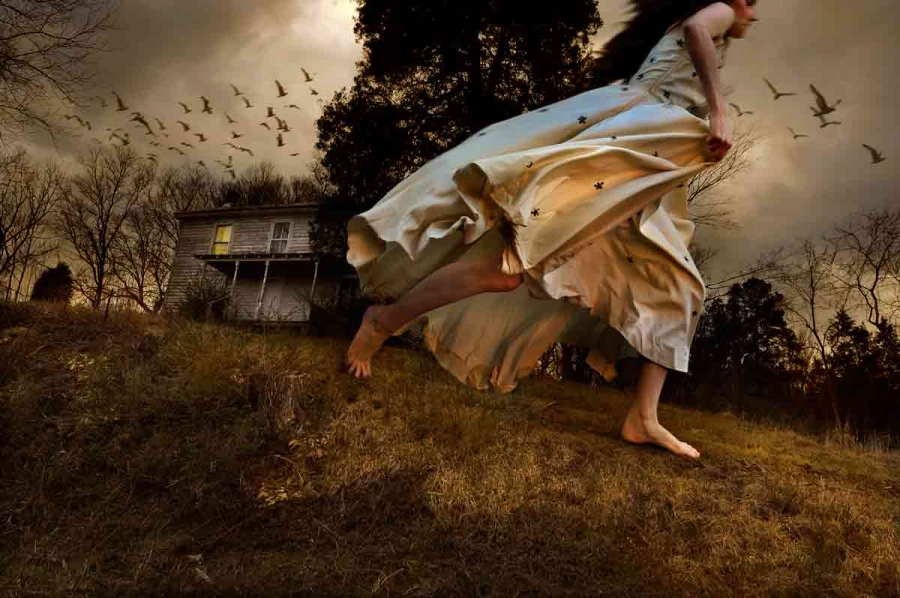 "Winged Migration" by Tom Chambers. Courtesy of the artist

My Friend, Nothing is in Vain

The fact of the matter is I like to shoot things. I like to go out with my buddies and shoot an old shotgun or a .22 or maybe a handgun if there isn’t anything bigger around. Most of the time, we’re just shooting coke bottles or clay targets, but I’ve had my share of rabbits and wild turkeys, even armadillos. The first time I ever shot an animal, I was out with my friend Ryan, and I got a lucky mark on a doe. At first, I was too busy jumping up and down to even realize that I’d begun to shake. Ryan took the rifle out of my hands, tugged my braid, and said, “You did it, kiddo,” and only then did my vision sharpen on the collapsed form at the edge of the field. That first step forward was like the first step I ever took. I probably shouldn’t tell you this, because it’s not politically correct to say, but it takes courage to kill something—you risk remorse, and remorse sticks. It won’t surprise you to hear that Ryan was the one who dressed the deer that day.

When I was prescribed a low-dose chemo, I didn’t like to give myself the injections, so I went to the doctor’s office every Friday to have them do it for me. I’d roll up my sleeve, turn my head from the harsh whiff of alcohol, feel a pinch, and then—bingo—I’d be pain-free for the better part of a week. It would have been a bully deal, except a woman came there on the same day who had lupus and rheumatoid and, God, it was bad. I stared at her, stared down the physical fact of her illness, even though it was impolite. I’d try to reassure myself while looking at her, think about how we’re all just raw material for the earth, how her fingers were dried up root twists, organs a compost heap, hair falling leaves. All the while thinking: Go ahead and dream up metaphors if that’s what you have to do, but don’t think of yourself. Don’t you dare think of yourself.

Once, when I was out hunting with my friend Sam, he tilted the barrel of his rifle toward the ground, shifted his weight, sighed, and employed all manner of male understatement to say, Oh God, my heart is broken.

I didn’t know how to say you broke it your own damn self, so I said, “You’ll probably never get laid again.”

“Then shoot me,” he said. I threw my arm around his shoulder and said, “Tell me what you want in a woman and I’ll find her.” He considered this for a moment. “Well, she can’t want children, can’t want to get married, can’t want to move in—”

“—and she can’t ever touch my wall art.”

“Because I’m about to put you out of your misery.”

I’d come home from getting my chemo and get high and sometimes that combatted the nausea, but mostly it didn’t. Sometimes it made me cough so hard that my lungs would act up for days. Sometimes it just left me depressed. But occasionally the drug opened up the deep calm that I carried in me always, that perpetual light, and it grew until it pressed out of me, broke right through my skin, which was discarded, so I was shining out into everything or everything was shining into me, and I was absolute and entire and never happier to forget my own name.

But in the morning I’d wake up to my body and, though the physical pain of the disease was fading from the shot, I felt less of everything else too and—I’m ashamed to admit—I preferred it that way.

The thing is, bravery is easier for the dying. That’s their dirty secret; they don’t tell you because they get dragged speechless into the beyond. But the extremity of the thing, the sheer mind-splintering horror of extinction, grants them a kind of endgame courage—after all, when so few players are left on the board, the white knight can loom large. The truth? You can only really, truly be brave when you’re in the midst of life, when you’re risking everything. There’s no risk in death; there’s nothing at all.

So, a while ago I met this tow-headed boy named Jules at a party, the nephew of my friend Simon. He was seven and a real pistol if there ever was one. He said to me, “Lord, there’s this girl who wants to wring me by the neck!”

“Sounds like you’re working pretty hard to convince yourself.”

He harrumphed and crossed his arms. “I need advice.”

“Here’s my advice,” I said. “Your suffering is not in vain. You were born to be given away. But it takes cojones.”

“You’ve got to grow a heart bigger than your body. I can’t tell you how to do it.”

He regarded me carefully then, his bright face sobering, and he said, “Hey lady, do you take your own advice?”

I’m terrified of guns and the reason I know this is because every time I go shooting with one of my buddies, I have a nightmare. This last time I dreamed I was driving around with Ryan’s shotgun leaning on the passenger seat of my truck, snout up in the air. I was speeding down those mountain roads, the ones that wind and swerve, so the shotgun was slipping side to side like a windshield wiper on the seat beside me. When I reached my destination, I hopped out in a hurry and flung the shotgun up to my shoulder. Just for shits and giggles, I pulled the trigger, and—don’t you know—it shot.

Oh, I woke up in such a trembling sweat. I’d been driving around with that thing loaded. I was about to cry just thinking about it, so I called Ryan right away, even though it was the middle of the night, and he said, “Kiddo, that was just a dream. It wasn’t real,” and I said, “Yeah, I know you’re right.” But we were lying through our chattering teeth. Do you know what I mean?

I was alone for a long time. I think I preferred it that way. Pain is very hard to explain and it scares people, most of all one’s self. Nobody wants to forget their own name. The woman at the doctor’s office probably died, because she suddenly stopped coming. Please understand me when I say that’s all right. Even the world can be forgiven. I finally stopped the chemo because I couldn’t tolerate the nausea and, yes, now the steroids are dissolving my bones and causing me to lose my hair, but you know what? I’m dying. The truth is nothing ever really controlled the pain. My friend Simon says the sun will rise and all the wild world will come into blossom, even though I’m dying. I’m dying, my friend, I am dying. Be brave. When I was done being alone, I brought a man into my bed and we made love and it was wonderful and I have come and gone already. Please understand me when I say I am redeemed.

C. E. Morgan is the author of All the Living and The Sport of Kings. She lives with her partner in Kentucky.