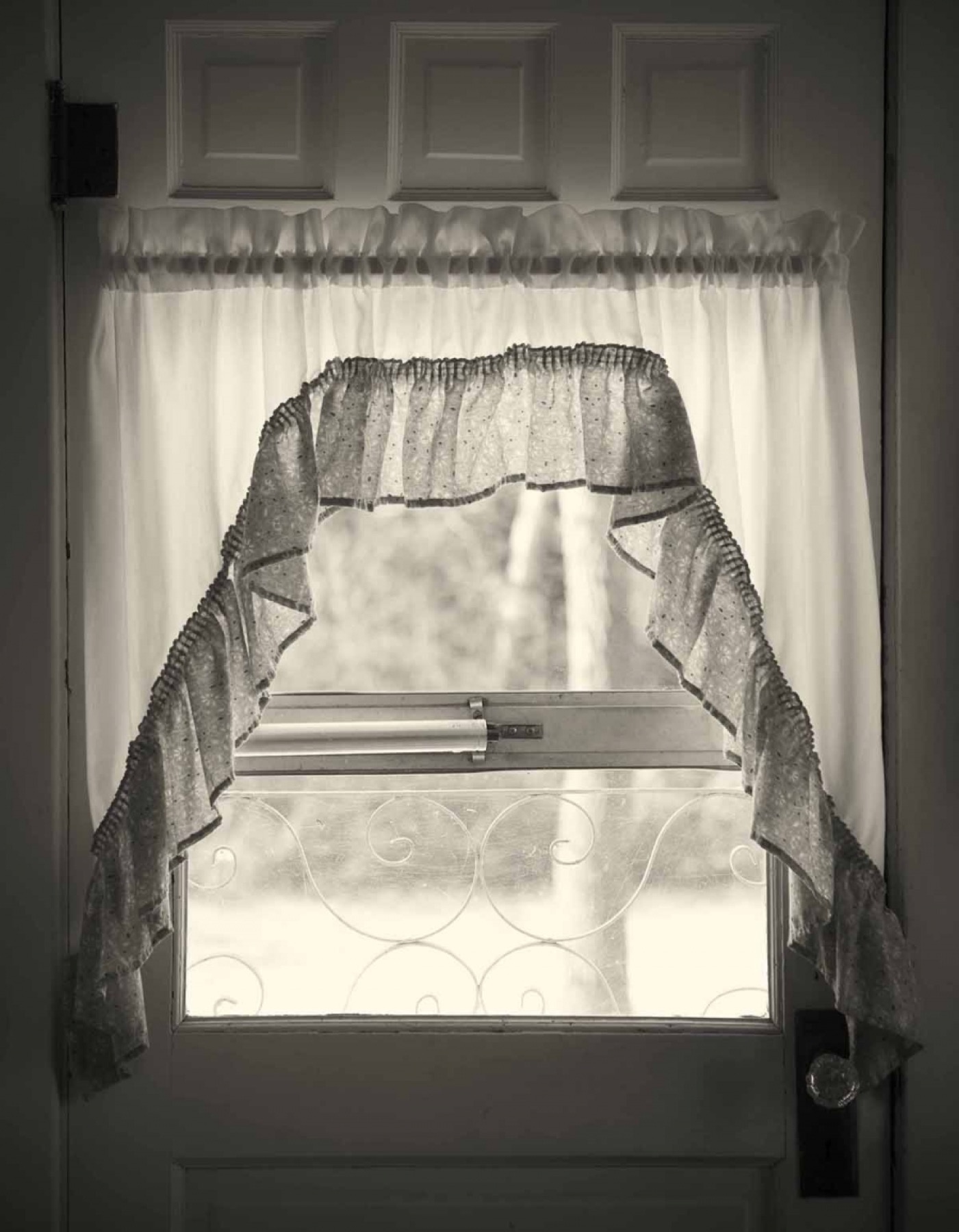 Young as they appear to be, the house painters have daughters old enough to complain about, which they do, to each other, across an expanse of a few feet on ladders at the south-facing second-story windows of the house.

From the start Peg has stayed in the house and watched from different windows as the boys have painted. She just hopes Pat Farkey keeps sending these boys.

Peg can barely say hello to the house painters, so abashed is she by their hearty sweetness and the lives she imagines for them.

Peg talks to the kitchen chairs. She’s doped, of course, but the furniture is company. The young house painters climb down and lean against their truck and smoke. Smoking . . . she did that once.

Her husband Anders watches the boys smoke, says something, makes them smile, or are they grimacing a little? Has he cornered them or asked something off-color, personal—You getting any? That sort of thing. She’s heard his coarse approximations of street talk, young talk. She’s heard him ask girls, You ever been in love?

Anders did the Rite Aid business today and—no surprise—got to talking with the pharmacist Stephanie. He likes Stephanie. “Girl’s open as a penny,” he says. True. But Peg can hardly face her.

Stephanie was the one to fill their daughter’s last newest failed prescription, the inflating and idiot-making pill that turned the girl into a parade balloon in need of handlers—chiefly her mother—the ones that made her quiet, helped her sleep, helped her wake, one a day, twice a day, twice a day with meals. Who doses her at Medfield? Peg doesn’t know. They’re not allowed to visit: the doctors think it best.

There’s nothing much to talk about over lunch but Pat Farkey’s painters, and yes, as far as Anders is concerned, they are the best on the peninsula, yes, he is happy with the job so far.

Anders catches the door before it slams and it seems he might say more but what she halfway hears is Anders calling Ridge or Rodge? Redge? What is it? She looks out the window over the sink and sees Ridge is the one in a pirate scarf in a squat painting the railing. Okay. And hearing Anders, the boy springs up on ropey haunches, nods in greeting. She turns a knife in her hands and looks hard at this Ridge and then through the boy to the woods again and their neighbor’s field of brown stalks and burst pods, gone-by, tangled aster. She thumbs the blade, then uses the knife to skin the watery scum off the blackened bread board, scrapes strings and stems into the compost bag; into the compost bag, potato peels from dinner’s burger pie—my god, they do go on eating and eating. Maybe she’s pushing for earlier meals to make the days pass faster.

Your disappointments are mine: she had said this to Andie, to her daughter, Andie, in her boneless body—short neck, soft chin, moon face smally featured. What was a mother to make of such a face really? Say, it’s much like mine?

Peg knew the horrors of undressing, the crimped grooves of waistbands and camel-toed panties.

A boy in school told Andie she looked like a muffin top, which Andie took at first to mean a good thing until her brother Carl told her, “It’s your gut hanging over your jeans.” What was the matter with him? Hurts, prickly, hive-like bites, little poisons Peg can’t scratch out: “Maybe it’s the moles on your face make you look old, Mom”—and the boy had said worse, but she didn’t always remember.

She doesn’t want to remember gunt but the hamburger grays in the pan, and gut, cunt, gunt, and the memory of Carl’s mouth, new beard, raw skin is upended by Carl himself loudly arrived—Hi, Mom—and behind him, his girlfriend Lee-Ann, both smiling as if they like her, as if they come by every day and are expected.

Anders points out the brush work on the porch rail’s skinny spindles. “Come out and look!” The name Farkey is on his lips though it’s the kid, Ridge, that house painter who’s done the work Anders praises. Peg watches Carl and Anders and Lee-Ann as they look up at the spindles and the scrolled eaves on the house, this old farm house, once, a hundred years ago, a tea house for the quarry down the road. A plaque near the front door reads: Fern Cottage 1888. The name is Anders’s invention, a dainty tea-like name and a nod to the ostrich ferns that thrive in the dark borders of the lower garden.

What is Anders saying to these unexpected guests—so that now Peg has to double up on potatoes and cut limp carrots for a side dish to a stretched-thin dinner of gray burger pie. The business makes her angry, even as she urges unsalted Saltines and low-fat cheese, and when Lee-Ann reaches her loose inky arms, Peg sees numbers and initials in a wreath, an excuse for petals, droopy, not so sad really, really smeary.

Now, for instance, Carl is talking about auto body parts online—alternators or motor mounts, belts. Something he can get for cheap.

Carl, who has been listening for anything Lee-Ann might say, takes up with Anders again about a Corvette he could fix if only . . .

“If Dad lends you money?”

“Well whoever you are, everything doesn’t have to do with money.”

“That’s all you’ve said, all you ever say is how much, how much. How much the painting’s costing and how Farkey’s never here but lets his kids do the work. Kids younger than me. I should be doing the painting, right?”

“Nothing to fight about now,” Anders says.

“I didn’t expect you for dinner tonight. Your father didn’t tell me. I didn’t invite you or your girlfriend.” She says, “I like the house painters. They have children. They’re married.”

“Yeah, real grown up, I bet, and living happily ever blah, blah.”

“This is why I hate coming here.” Carl pushes away from the table and Peg makes for the boy, grabs at his shirt.

“Don’t you think you’re a little old for a teenager, Carl?”

Lee-Ann, the teenager, looks to what Carl does and follows him out of the house, saying nothing as he talks loudly about Peg, the bitch. Is it any wonder Dad wants company?

Carl, turned thirty-seven last March, very quietly at the kitchen table over double- trouble chocolate cupcakes Peg has made for him for almost as many years. The girlfriend was missing, but Carl had seemed happy to her then, maybe not to her husband, Anders, no; maybe not as happy as the house painters, but celebrating in a house with a ghost for company, what could they expect?

Not much. His nights, his days, his progress in the tech course, she doesn’t ask, Carl doesn’t report. He has an apartment. Anders helps with the rent because Carl’s only part-time at the dry cleaner. He’s otherwise, or says he is otherwise, taking mechanic courses at Ramapo.

Peg makes the double-trouble chocolate cupcakes for herself as much as for him. A bowl-licker, a spatula-sucker, she doesn’t stint on sugar and it shows, even though the boy ate most of them this year. She hasn’t beaten the eat-healthy drum very loudly, doesn’t mention weight. Sleeveless dresses still chafe her arms and underwear yanks up her crack and hurts so that she stands still or moves smally.

One year, the boy wanted cherry pie à la mode, and Peg made both, the pie and the double-trouble cupcakes.

Today she is barefoot in what Anders calls her farmer pants, bib overalls, softly comfortable, but loose as an old slipcover, and she is saddened to think she looks like a sofa, except that now she has no daughter to complain about—once, but no more.

Every time Peg looks at her right hand she sees another kinked or swollen part visit her.

Christine Schutt is the author of two short story collections, Nightwork and A Day, a Night, Another Day, Summer. Her first novel, Florida, was a National Book Award finalist; her second, All Souls, a finalist for the 2009 Pulitzer Prize; her third, Prosperous Friends, a New Yorker Best Book of 2012. Among other honors, Schutt has twice won the O. Henry Short Story Prize.