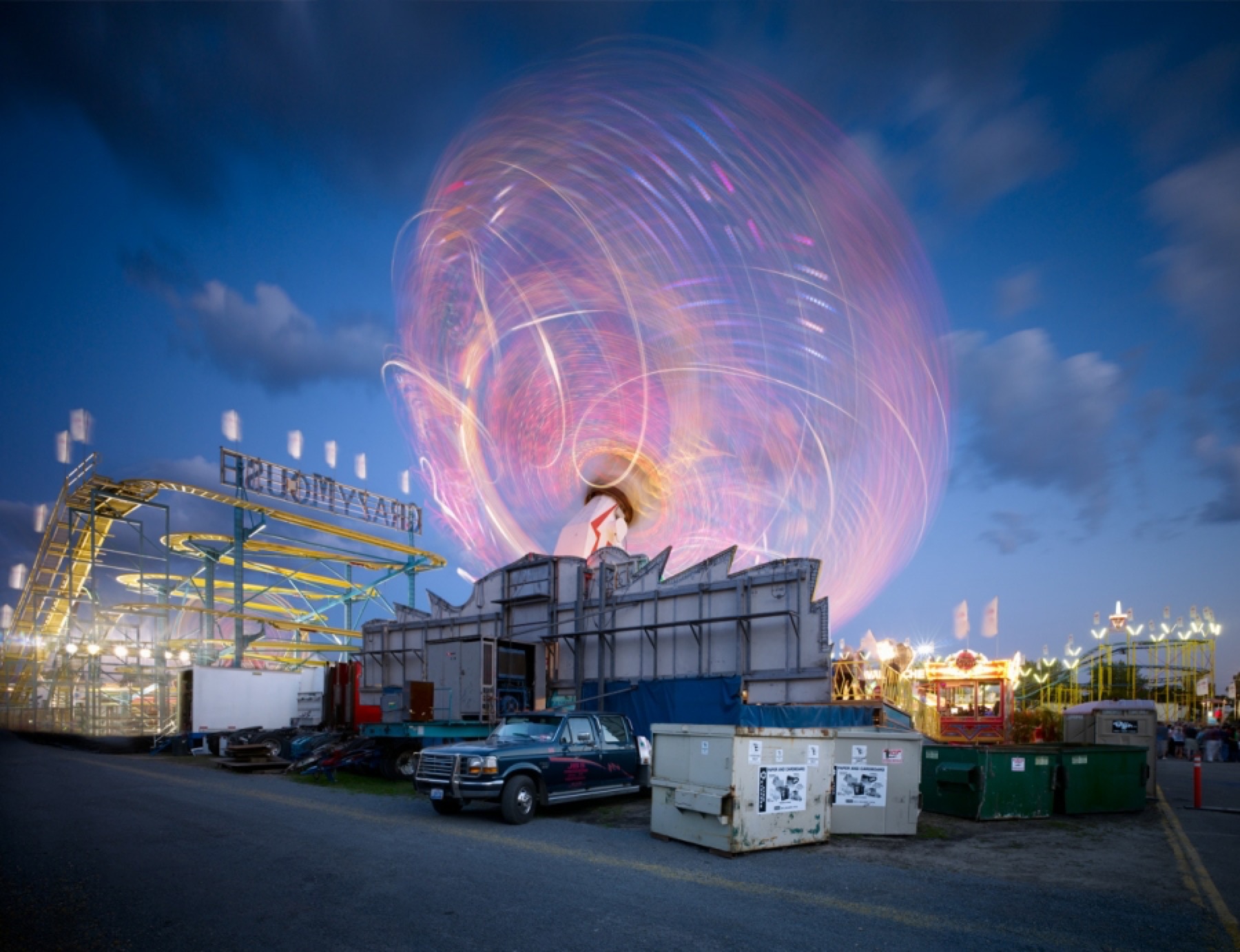 I am from West Virginia; I left the state for good a decade ago, yet I continue to ricochet back, most recently to wander the state fair. Every fair is a cardboard town, though a place projects something of itself onto that collapsible template, and we go to experience that reflection, distorted as it may be. At this fair, as at so many fairs, pleasure is measured in sugar highs or blue ribbons, the force of wind on the Tilt-A-Whirl or the frisson of seeing a cow about to give birth. Here, the West Virginia Building is the flagship for the bona fide homemakers: grandmothers with names like Norma and Betty Ann who are famous for their apple pies, heirloom tomatoes, or pickled beets; gardeners who know how to graft fruit trees and save seeds. The space is uninterrupted, like an indoor track. Gospel music floats through the cavernous room and intricate quilts hang from the ceiling. Some of them sport West Virginia State Fair ribbons, like the prize-winning vegetables, fruits, jams, honeys, cakes, cookies, and pies displayed on pedestaled platforms below. Afghans, like the ones my grandmother used to make for my baby dolls, hang from racks, and yarn rugs, which call to mind my middle-school class on, of all things, latch-hooking. I think that I might like a quilt, but there don’t seem to be any for sale. The lines to buy lottery tickets, however, are dozens deep, even outside in the indecisive summer rain. I see camouflage Bible covers for sale, massaging shoe insoles, infomercial cookware, and hot tubs. Also dozens of novelty t-shirts, Duck Dynasty merchandise, and artworks embedded with small lights like Kinkadean Lite-Brites.

The early West Virginia state fairs used to close in the middle of the day for venue-wide picnics; an 1896 exhibitors’ guide notes the menu of “fried chicken, potato salad, fresh tomatoes and other fresh garden vegetables.” In 1921, someone named Harry Wheadon performed his “Sensational Novelty Slack Wire Act.” Today, I order my plate of fried chicken and coleslaw packed in a Styrofoam cup from the State Fair Cafeteria, spotless and awash in fluorescent light and white surfaces, the food plain but satisfying, like that of holes-in-the-wall where chefs insist they eat on their days off.

The livestock and agriculture area is a realm of sensory chaos: braying goats, giant hogs in repose, the air sharp and deep and metallic. I can’t help but reframe my own weaknesses against the brute effort contained here, the elemental work of blood and earth, the business of raising something to kill it. In the show pavilion, on a groomed green course, baby-faced teenagers stand with their calves. Not far away, young people board sweaty carnival rides and make out in the timid, determined way of teenagers everywhere—though in this world the kids have stage nerves but also an oceanic calm, a command of their situation. A man parts a distracted crowd so that he can pass through, leading a massive bull behind him, and I understand how people might come to worship cattle. At a nearby station, a woman from the West Virginia University Extension Service asks, with step-right-up showmanship, which vegetable- and meat-shaped magnets on the whiteboard beside her should be water-bath canned and which should be pressure canned. In a walk-through vegetable garden, another demonstrates how to harvest coriander seeds from bolted cilantro.

Elsewhere on the fairgrounds, amongst the rides, stretches a seemingly endless horizon of food stands: more dining options, surely, than exist in many small towns. Sixty-nine food and drink purveyors have registered, both commonplace peddlers of a greasy bacchanalia of cheesesteaks and deep-fried Oreos and more idiosyncratic vendors, such as the West Virginia Cattlemen’s Steak Wagon and the ham stand run by a local high school’s FFA chapter, where I eat a salty country-ham biscuit and drink Dr. Pepper while a teenager named Cora points out which flashing attractions will make me puke.

For dessert, inevitably, I indulge in the funnel cake, hot and coiled tight, challenging the infrastructure of a paper plate. I can barely eat half of it, but it has to be done. The fried dough tastes like August in Monongalia County—and reminds me, oddly, of the roasted corn I used to eat there at our own little fair. It was nothing special, just corn dipped in butter, but in that char and salt was the taste of teenage independence, of wearing baggy men’s jeans and tight baby-doll t-shirts and squeezing hours of narrow but triumphant freedom out of an attraction that you could lap in twenty minutes. And now I remember another moment, the one after the roasted corn, the one before the quiet walk to the gravel parking lot beneath the sinking summer sun.

Enjoy this story? Explore the archive.

Courtney Balestier is a food and culture writer whose work has appeared in Lucky Peach, the New York Times, Saveur, Gastronomica, and has been anthologized in Cornbread Nation 7: The Best of Southern Food Writing. She is from West Virginia and currently lives and works in Detroit.