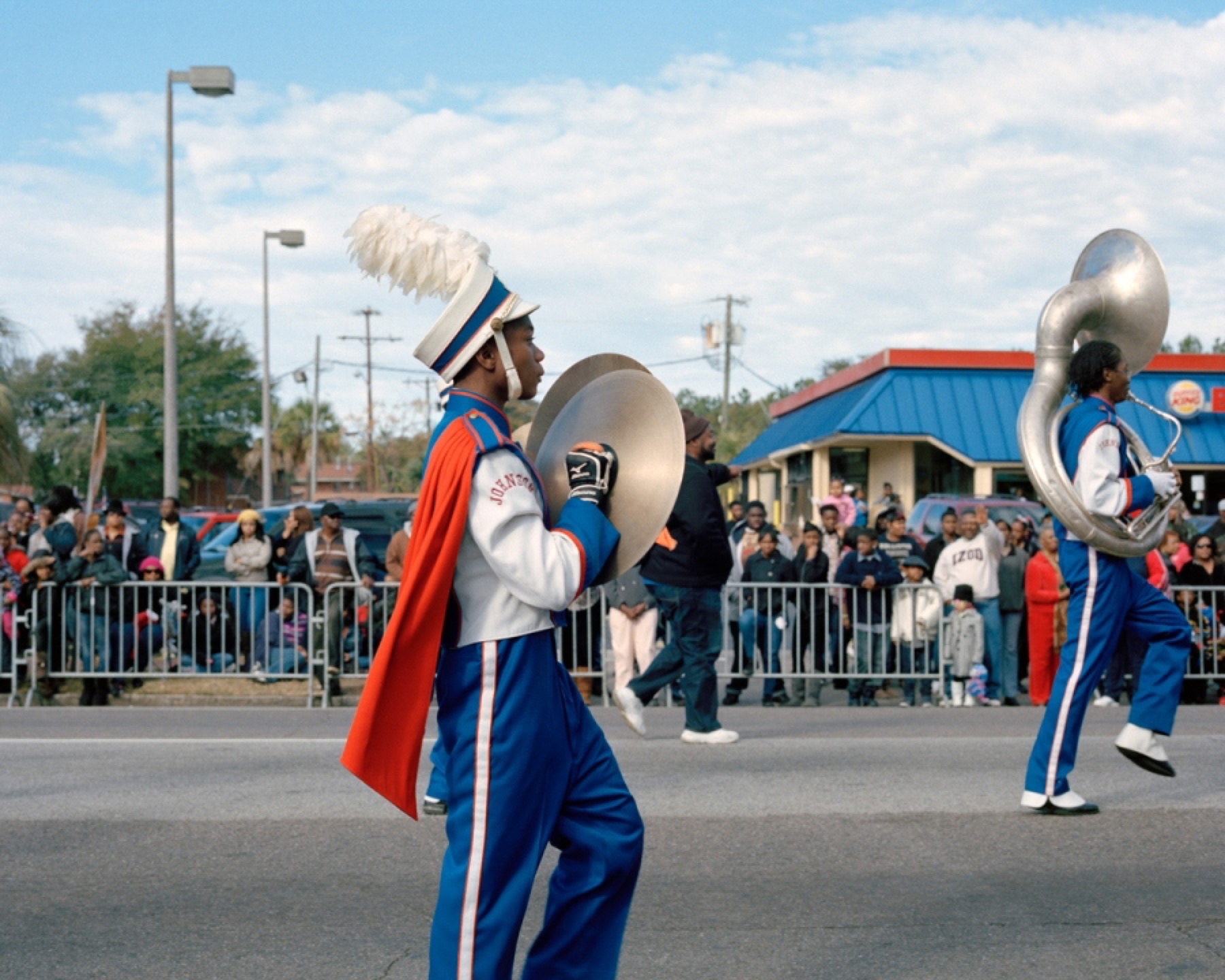 To send him home, Dr. Martin Luther King Jr. requested a modern gospel composition performed by its greatest singer. In 1968, Mahalia Jackson sang out of pain, she sang out of praise, at both the funeral at Ebenezer Baptist Church and the memorial at Morehouse College. She was a large black woman with a kind and pleasant face. When she opened her voice and unleashed this powerful praise music, she vocalized the sentiments that form the foundation of the modern black church:

Though often mistaken for a hymn, “Take My Hand, Precious Lord” is a copyrighted composition. If you were to see the sheet music displayed on an upright piano in church, you would see the name Thomas A. Dorsey, songwriter and pianist, who wrote it in 1932. Dorsey was born in 1899 in Villa Rica, Georgia, which he described as “a little settlement there where they had a few stores and the train came through.” His father was a gifted traveling preacher and his mother played organ in church, staying within the written music of the hymnbook—young Dorsey learned to play the organ organically, by observing her. In childhood he was exposed to two contrasting styles of music. One style was that of his mother: shape-note singing and hymns that were available in mainstream church hymnals. He also heard improvised songs that had links to slavery and which were still vibrant in the black communities of rural Georgia.

When he invented modern gospel, years later, Dorsey created a bridge between those worlds. He wrote songs like a bluesman because he was a bluesman. And he taught choirs to sing that way: calling to God, guided by the musical structure of the blues.

In 1908, the Dorseys moved to Atlanta in search of new opportunities. Thomas took a job as a concession boy at the 81 Theatre downtown, where he learned from the house pianists who played for silent films and stage shows. When he was a teenager, he read the Chicago Defender, a leading black newspaper that presented commentaries about the racial injustices of the South. The paper encouraged its readership to consider moving to Chicago for a better life. This appealed to Dorsey, and he relocated there in the fall of 1916, with plans to develop his craft in the winerooms and house parties of the city’s blossoming music scene.

A few years after he moved, Dorsey met a fellow who would change his life: J. Mayo “Ink” Williams, the talent scout for Paramount Records. Williams saw recording star potential in a black vaudeville stage veteran named Ma Rainey. In 1923, he asked her to record for Paramount. Rainey asked Dorsey to form her tour band. He said yes, arranging the songs and teaching the band how to play them, showcasing three types of music: the vaudeville and pop Ma Rainey was known for; the blues she recorded for Paramount; and Southern “hot” jazz, a new phenomenon at the time. Dorsey assumed the stage name Georgia Tom, the group was called the Wild Cats Jazz Band, and the show took off.

The band rocked crowds every night in theaters all over the Midwest and the South, where there was a hunger and a need for authentic black blues performance. Ma Rainey brought something wholly new to the concert experience of down-home blues. Up to that point, this music had been confined to low-grade black theaters and hole-in-the-wall rent parties. Now it emerged in mainstream black theaters.

Dorsey had renewed his faith in the church at a 1921 National Baptist Convention in Chicago, where he was moved by one of the singing evangelists who added embellishments and subtleties to the music written on paper. The nature of structured improvisation hit Dorsey to the core. “My inner being was thrilled,” he said. “My soul was a deluge of divine rapture; my emotions were aroused; my heart was inspired to become a singer and worker in the Kingdom of the Lord—and impress people just as this great singer did that Sunday morning.”

Dorsey again turned to God when he suffered a nervous breakdown in 1926. He quit Ma Rainey’s band. His idea was to write songs that would preach the word of the Lord while using the structure, form, and nuances of the blues. “If You See My Savior” was his first gospel blues. He copyrighted the song and distributed it to churches in Chicago. He elicited help from his family and fellow church patrons to mail promo copies and sell the sheet music door to door.

Though the gospel publishing business started slow, it would prove to be a smart move; as the demand for the blues began to die down, the demand for black sacred music began to rise. Michael Harris writes in The Rise of Gospel Blues: The Music of Thomas Andrew Dorsey in the Urban Church, “By the early 1930s, the scene in old-line black urban churches had become that of a perplexing potpourri of white mainline Protestant and Southern Afro-American religious rituals. Neither group seemed able to claim an entire worship to its liking.” Gospel blues represented a “new mode of religious expression.” As he began to introduce the gospel blues into the church music communities of Chicago, Dorsey was an innovator, the only game in town. Alas, it was impossible for him to support himself selling sheet music.

In 1928, Dorsey met a young guitarist named Hudson Whittaker, better known as Tampa Red. Tampa Red was another Georgia boy; he was from Smithville, a town near Columbus. As Georgia Tom, Dorsey began to collaborate with Tampa Red, making it big with “It’s Tight Like That,” performed in a humorous style that came to be called hokum. Business was good. Georgia Tom’s rollicking barrelhouse piano combined with Tampa Red’s slide guitar, creating a sound that was unlike anything else on record.

A source of great happiness in Dorsey’s life was his wife, Nettie Harper, whom he met when he was twenty-six. They were married during one of his breaks from touring with Ma Rainey, then Nettie joined the band on the road as wardrobe mistress. After Dorsey had the nervous breakdown, she supported the family, working in a laundry by day and nursing her husband by night. By 1932, they finally had some financial stability. But Dorsey’s world collapsed when Nettie died in childbirth. Their newborn son died the next day. Out of this tragedy came Dorsey’s greatest composition.

He eased his pain by composing at the piano, tinkering with and adapting a hymn written in 1852, “Must Jesus Bear the Cross Alone?” He asked a friend, the pianist and composer Theodore Frye, for his reaction to the new song. In response to Dorsey’s lyrics, Frye said, “Don’t call Him ‘Blessed Lord.’ Call Him ‘Precious Lord.’” Dorsey took heed. While he didn’t know it yet, he had created a song that would outshine all his compositions. Harris writes, “The marriage of Dorsey’s musical and textual voices, as represented by the composition of ‘Take My Hand, Precious Lord,’ amounted to the final resolution of the warring interpersonal dualities in Dorsey’s life.” Dorsey had written a blues text set to gospel music.

An ambitious performer and businessman who’d spent years trying to profit from his compositions, Dorsey was finally able to use his drive to glorify God. He’d found solace in his newest and greatest creation. Now, he just needed to find someone to sing the song.

After seeking out several vocalists, Dorsey thought of Mahalia Jackson, whom he had met in 1928. He was impressed by her ability to win over a crowd with her charismatic nature; he felt she created a sense of community with each performance. Yet Dorsey also saw that she needed work to reach her full potential. She could get the audience “patting their hands,” as he said, but she could not cut deep into their hearts like a blues singer. Of course, this was Dorsey’s specialty, and by 1932 he had plenty of practice coaching sacred and secular performers.

“Take My Hand, Precious Lord” would be Dorsey’s legacy not only because of the song itself or because of Mahalia Jackson’s eventual performance. (Jackson is still considered the true personification of gospel music.) The powerful sound of gospel came from the natural voices of a people who had been repressed for many years, in and out of their own communities. Gospel gave the black community a freedom they had never before had.

As 1932 gave way to 1933, Dorsey was elected the first director of the National Convention of Gospel Choirs and Choruses. It had been nearly one year since the death of his wife and child. From this new position, he would organize gospel choruses and continue to write songs—four hundred in all, up until his death on January 23, 1993. He never returned to playing the blues or hokum. As he put it, “this is better over here where I am.”