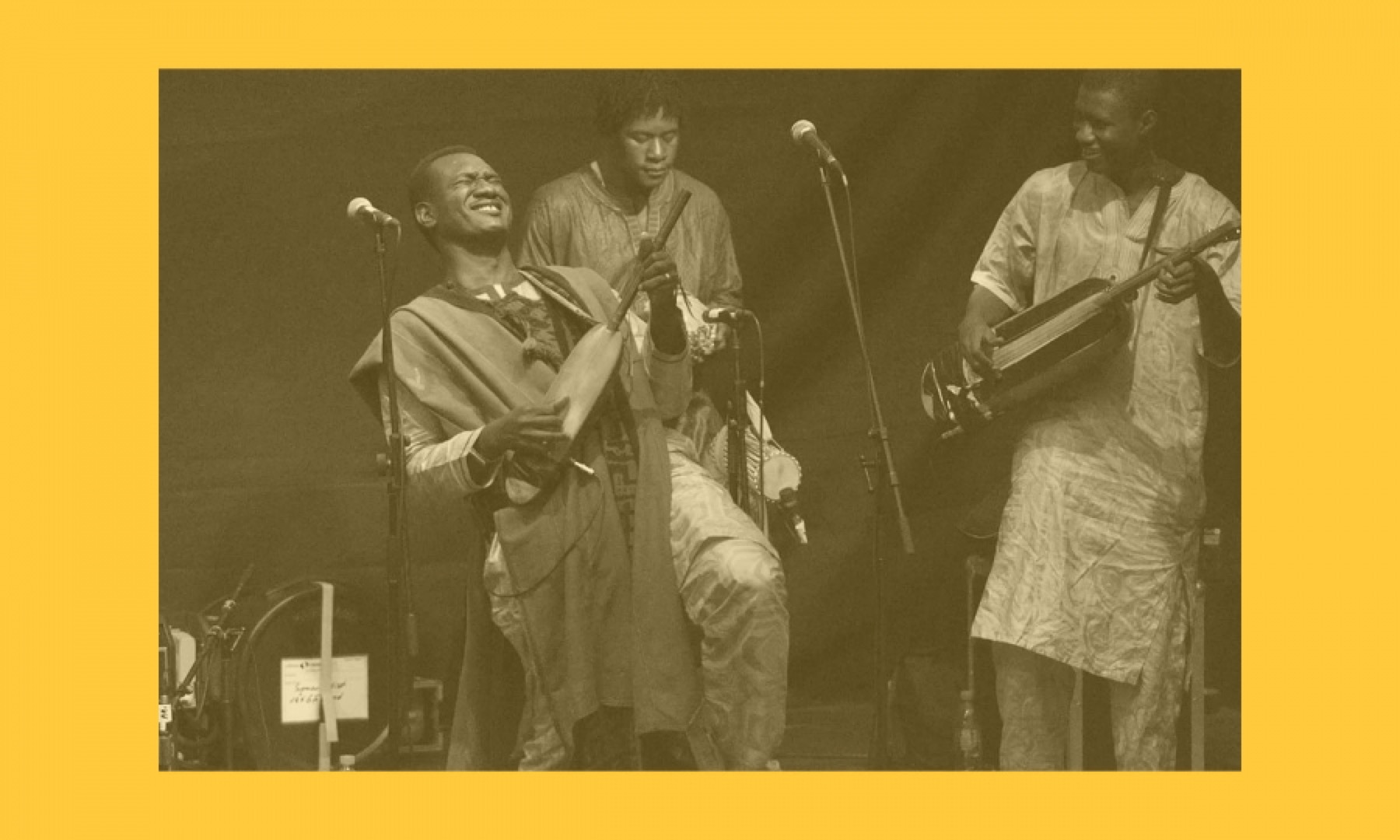 Malian instrumental maestro and innovator Bassekou Kouyaté plays the ngoni, an internal spike lute, part of a family of very old string instruments in West Africa that inarguably represent the model from which the American banjo evolved. In each instrument, the resonating chamber is a drum, not a box as with the guitar or mandolin. That taut skin gives every note a percussive quality, producing a unique merger of melody and rhythm. The ngoni is fretless, as were the original banjos. And, like the banjo, the ngoni has its highest pitched string placed above the lowest note, where the thumb would naturally pick it.

During the nineteenth century, the evolution of minstrelsy and later vaudeville in the United States saw the banjo pass from black to white hands. The instrument was initially used to parody blacks, along with blackface, watermelons, and other clichés of the day. This had the inevitable effect of tainting the banjo in the eyes of black American musicians, who came to favor other instruments, notably the guitar, which plays such a central role in the emergence of blues as a genre. Meanwhile, the banjo became beloved in largely white-identified music styles such as country and bluegrass, for a time concealing its African origin in the popular imagination.

Many West Africans, especially in Mali, heard blues on the radio or were exposed to it through Ali Farka Touré; this would certainly have been true in Segu, the center of Bamana culture where Kouyaté grew up. African radio programmers were naturally attracted to blues. They sensed something of themselves in it, likely because, as Kouyaté firmly believes, the Delta blues grew from traditions transported across the Atlantic by Bamana musicians sold as slaves. Listeners weren’t exactly blues aficionados, but you would be hard-pressed to find a Malian musician who does not know and love John Lee Hooker. Malian music, too, puts a premium on emotionally charged improvising, and early in his career Kouyaté experimented with bending notes and working blues ideas into his improvisations.

“Segu Blue,” the title track from Ngoni Ba’s debut album, is Kouyaté’s interpretation of an ancient and distinctly bluesy Bamana song, “Poyi,” and it offers a clear example of how easily he is able to interweave his inherited tradition with borrowings from American blues. It starts with Kouyaté improvising alone in a G-minor blues scale, with sudden note bursts and note bends. When the backing comes in, it unfolds as a rootsy blues, with Bassekou and his cousin Barou riffing within a single mode rather than following 12-bar or 8-bar progressions typical of American Delta blues. That preference for a modal, one-chord tonality, rather than a repeating chord structure, reflects a great deal of Malian, and particularly Bamana, traditional music. The soloists stir the blues and Bamana elements together: rapid trilling and hammer-on-pull-off phrases that incorporate chromatic notes not found in the straight pentatonic scale.

The Bamana riffs are rather like phrases from another language or dialect that sit comfortably within the overall blues tonality but announce themselves as distinctly different. We hear Kouyaté hammering on two strings playing the same note, or, elsewhere, using the high string in the low position to double a note, producing a unison trill that can be seen as an African cousin of the same blues effect. The song’s slow tempo, with its underlying triplet feel, also fits both the blues and traditional Bamana style. Kouyaté throws in a nod to Hooker by quoting a classic vamp near the end of the song, but you would never hear a blues guitarist playing the kind of ornamented, start-and-stop embellishments he unleashes on his fretless ngoni.

The fact that Bassekou Kouyaté would title his calling card to the world with a direct reference to American blues and its connection to Segu demonstrates the artist’s pride and passion at participating in a two-way dialogue that goes far back into history, and continues to resonate today.

Return to the Visions of the Blues CD liner notes.

Banning Eyre is a producer for public radio’s Afropop Worldwide and author of In Griot Time: An American Guitarist in Mali.

Dig If You Will The Picture