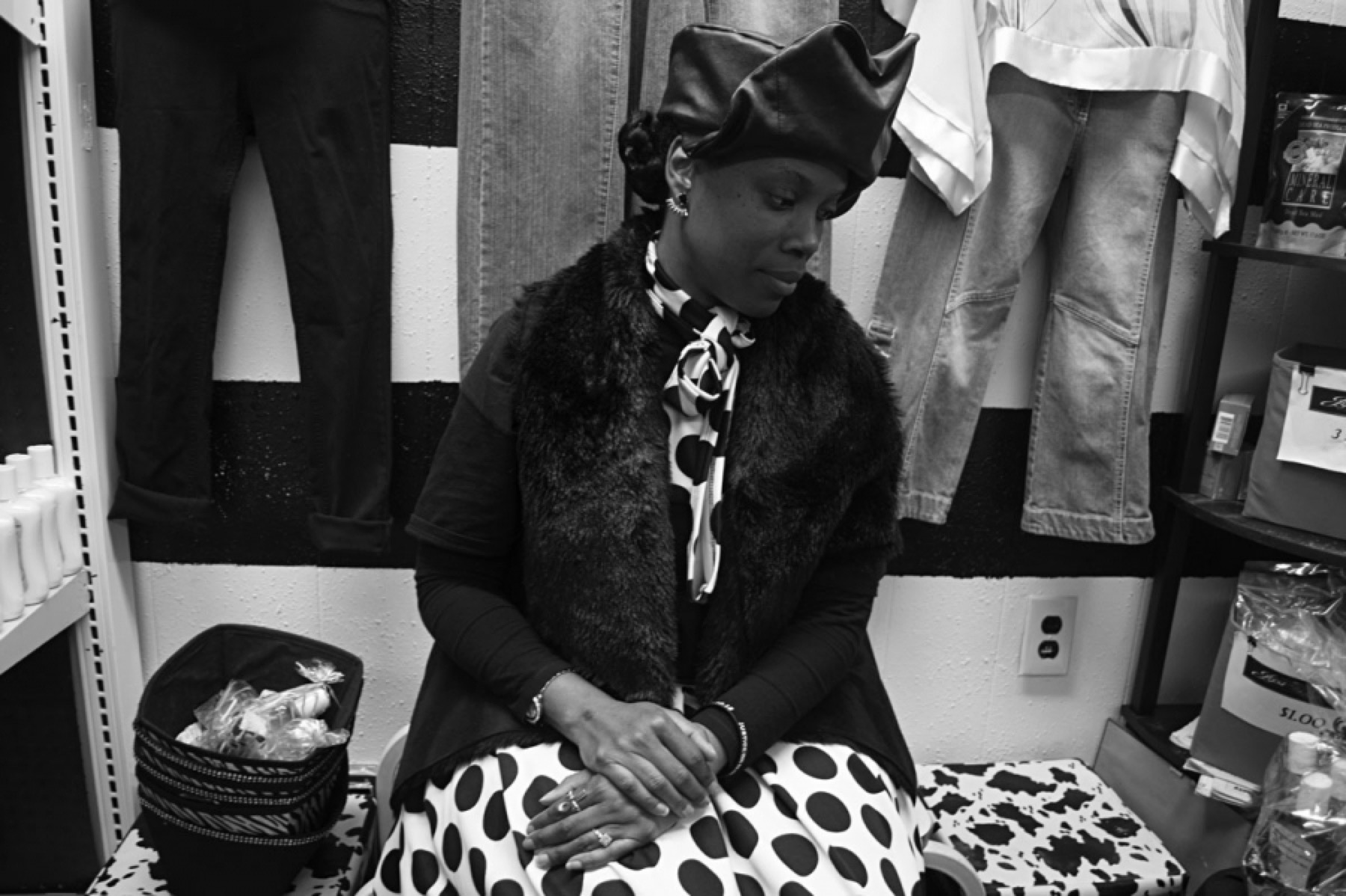 Khalilah Muhammad sits in her clothing store in the back of a shopping plaza on Normandy Boulevard.

By Sarah Stacke and Johanne Rahaman

Photographs by Johanne Rahaman, with an introduction by Sarah Stacke.

Johanne Rahaman and Renata Cherlise have never had the chance to shake hands, embrace, or even stand in the same state at the same time, yet they harbor a profound relationship—like the type of bond one might have with an ancestor found shuttered inside a grandmother’s photo album. For Rahaman and Cherlise, kinship comes from their shared histories. Both women moved away from their families then chose to investigate the concept of home through imagery.

Rahaman, a photographer based in Miami, is the creator of Black Florida, a series that looks at the predominantly black towns and inner cities of Florida. Cherlise, based in Chicago, is the founder of “Blvck Vrchives,” a curatorial project highlighting the under-told stories of black history in America. After finding each other’s work on Instagram, Rahaman and Cherlise united. Using Rahaman’s contemporary photographs and Cherlise’s family archive, the women reveal the hidden narratives of Blodgett Homes, the housing development in Jacksonville, Florida, where Cherlise was raised. Often invisible to, or framed with violence by, national media and the public, the families living in Blodgett Homes are visualized through Rahaman and Cherlise’s images.

I recently spoke to Rahaman and Cherlise on the phone, separately, about their lives and work. What radiated beyond their humility was the responsibility they feel as citizens—and as daughters—to document, preserve, and share the stories of Blodgett Homes. For each woman, this calling is a tangible lifeline to home, family, and “blood memory”—two quiet words that, strung together, conjure the glory, power, and pain of living. It’s the expression Cherlise uses to describe the communal experiences of black life.

Built in the early 1940s, Blodgett Homes is a 654-unit public housing complex. According to Cherlise, who was born in 1982, the community there used to operate like a family-minded village. But a downward spiral began in 1960 when Interstate 95 was built—with the government’s full understanding of the disruption it would cause—on the complex’s doorstep, provoking many families to move. Management let the property fall into disrepair and rarely performed adequate background checks on incoming tenants, ushering in a culture of lawlessness. In 2001, Cherlise left for Chicago and has returned only three times: when her father was sick, then at his death, and then at the death of her aunt.

Cherlise’s work as a storyteller, archivist, and curator can be traced back to the day in Blodgett Homes when she picked up her grandmother’s frayed Bible from its elected place on the dresser. A curious child, she flipped through the pages, pausing just before Genesis. There, she saw her name, handwritten by her grandmother, near the bottom of a list of relatives who preceded her—a then-cryptic message about Cherlise’s family role. Seeing her name on that page, she was infused with the knowledge that she would become the designated record-keeper of her generation.

Rahaman, forty-eight, was raised in Trinidad, nearly two thousand miles southeast of Jacksonville. Until 1996, she lived with her family in a ward called Laventille Hills. Laventille roughly translates to “vent” or “window.” The neighborhood overlooks the Caribbean Sea and Port of Spain, the capital of the Republic of Trinidad and Tobago, like an exquisite, breezy nest perched atop the metropolis. Contrary to the bucolic scene its name evokes, Laventille Hills is notorious for being the most dangerous place on the island—although it wasn’t always like that. After slavery was abolished in Trinidad in 1834, many freed people sought sanctuary in the forested slopes of Laventille and found employment in the thriving capital city downhill. Yet governmental and societal institutions failed to offer basic services, such as education. Gangs eventually took root in Laventille Hills; violent crime crippled the community.

Over the phone, Rahaman described the island as a box—one that stifled her. She left Trinidad in 1996, searching for more economic stability and the space to let her imagination exceed her home’s littoral boundaries. After landing in Florida, she overstayed her visa, preventing her from going back to Trinidad unless she wanted to live there for good. She became a citizen of the United States in 2013 and a year later, she flew back to Trinidad for the first time, when her nephew was killed.

A self-taught photographer, Rahaman has been making pictures for more than a decade. Citizenship allowed her to obtain a driver’s license and travel freely. Since then, she has felt impelled to photograph black towns in Florida, the places that reminded her of—and comforted her like—Laventille Hills. Having lost her parents and the only grandparent she ever knew before she could return to Trinidad, Rahaman was drawn to the elderly people she encountered: the wizening of an aging woman’s skin, the glint of light off rounded glasses, the pebbled knit of a beloved sweater. Perhaps her own mother felt like that, carried herself like that, when she was ailing.

Rahaman sees every homemaker as a curator of family lore. In one home, sacred mementos and pictures are scrupulously arranged on walls, tables, and mantels—a private gallery shielding the family and their stories, their legacies, from the injustice outside, deflating and opposing the adverse gaze of others. Some photographs are hung at the height of a toddler. They will imprint on a granddaughter’s mind as she runs by, her hand lightly scraping over the wall and frames. The blood of her kinfolk, their gifts and their memories, will become a part of her before she knows what that means.

With Rahaman and Cherlise’s collaboration, the story of Blodgett Homes becomes one of family ties and resistance against the erasure of a community. Through the space of intimacy that photographs provide, the two women are bringing each other home.

This piece has been supported by Economic Hardship Reporting Project, a journalism nonprofit devoted to covering inequality in America.

Sarah Stacke is a photographer and writer who develops daily life stories about people living in under-resourced and narrowly represented communities that have been created by intersections of history, culture, and forced geographies. Her work has appeared in the New York Times, the New Yorker, and National Geographic, and she teaches at Duke’s Center for Documentary Studies and the International Center of Photography.
Johanne Rahaman is a Trinidad-born, Miami-based photographer. Her work highlights the beauty and dynamism of black life in inner cities and small towns in Florida, from the point of view of its residents. Her ongoing project, Black Florida, was born out of a desire to contest mainstream racialized narratives.