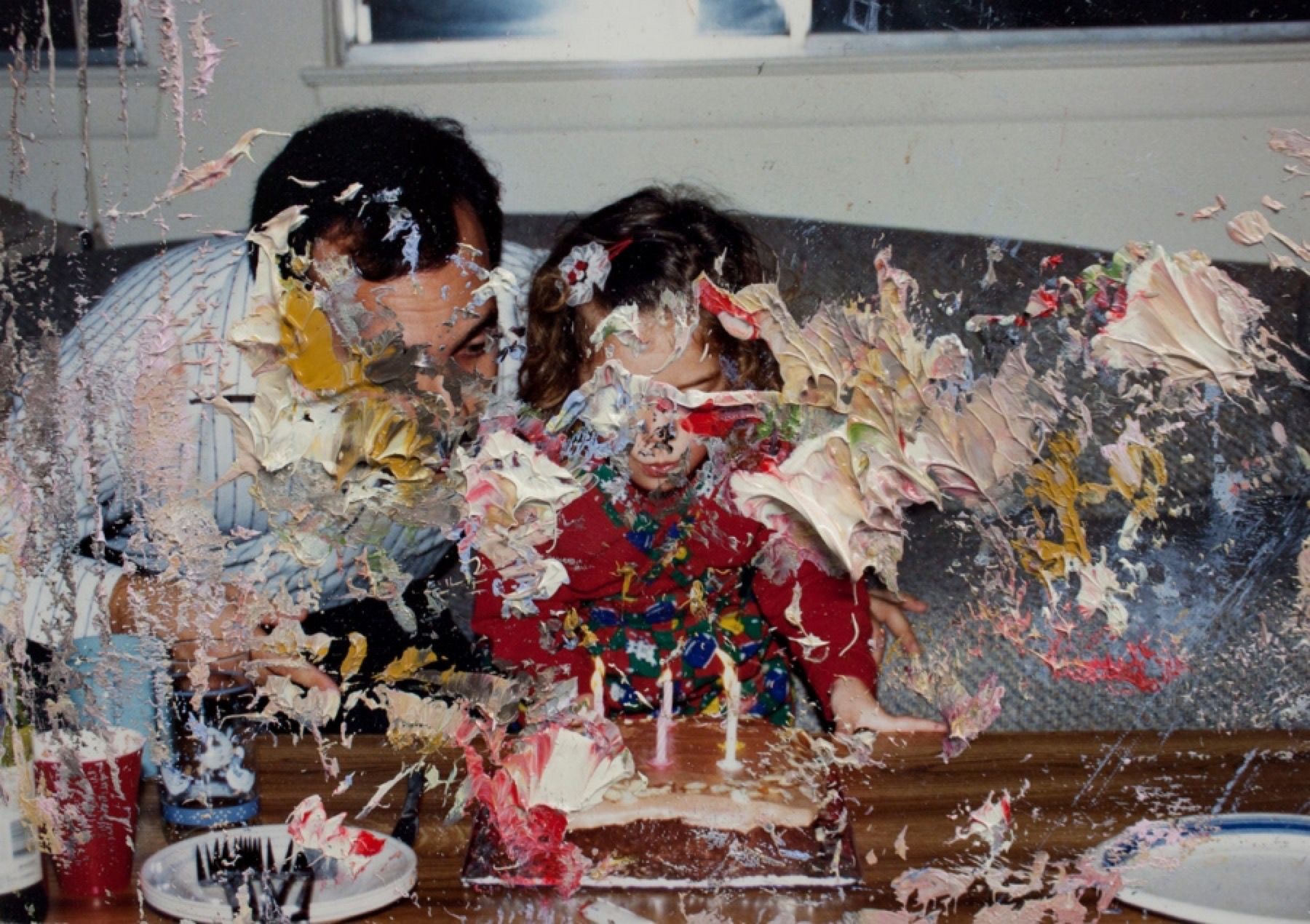 “Blow Out The Candles,” by Audrée Anid. Courtesy of the artist

Cave Hill Cemetery is where Louisville, Kentucky, buries its legends. Its 296 acres are dotted with monuments and historical markers honoring notable figures. Among them are George Rogers Clark, the Revolutionary War general who settled Louisville in the 1770s; former heavyweight boxing champion Muhammad Ali, known early in his career as the “Louisville Lip”; and Colonel Harland Sanders, who gave the world Kentucky Fried Chicken. But there are no historical markers in Cave Hill for Mildred Jane Hill and Patty Smith Hill, the sisters responsible for the most popular song in the English language—“Happy Birthday to You.” Mildred and Patty, born in 1859 and 1868, are interred in a small family plot with headstones bearing only their names and the year each was born and died.

Growing up in Louisville, I was taught that “Happy Birthday” was written by two local white kindergarten teachers—that’s it. But then I learned more about the Hill sisters’ unlikely story in the early nineties, when I was researching my book about Louisville jug band music, and in 2011, when my wife and I bought a house one street away from Kenwood Hill Road, where the sisters had a summer cabin. My wife is the president of the Little Loomhouse, the nonprofit that currently owns the property. The Hill sisters’ cabin fell down decades ago due to neglect, but three other similar board-and-batten cabins—called Esta, Tophouse, and Wisteria—are still there. I’ve sung “Happy Birthday” at parties in Esta, where local legend says the song was performed for the first time.

Today, when the Hill sisters are remembered by name, the focus is usually on Patty, a nationally renowned pioneer in early childhood education. Patty lived until 1946, long enough to see the success of the song she wrote with her sister. But Mildred has always interested me more. In addition to being a composer, she was an early ethnomusicologist, documenting the African-American music that permeated the streets, riverboats, and churches of Louisville in the late 1800s. She also incorporated these sounds into her most famous composition.

I discovered the connection between “Happy Birthday” and black music after reading “History of Music in Louisville,” a piece Mildred wrote for a book commemorating Louisville’s first one hundred years. In it, she wrote, “If a history of music in Kentucky were being written, a large portion should be devoted to the music of the Negro in our State . . . The old Negroes, who alone know this music, are fast dying out, and it is sad that some effort is not made to secure it before it is too late.”

Mildred did all she could to preserve this music. In 1898, the Louisville Commercial reported, “Miss Hill is an authority on this subject, having given much time to the collection of old Negro songs, which if not collected and preserved will soon be lost to us forever.” It was unusual for a woman of Mildred’s status to be championing black culture in nineteenth-century Louisville. After the Civil War, the city was a magnet for ex-Confederates because it was the headquarters of the Louisville & Nashville Railroad, which controlled all the intact Southern rail lines to the Deep South, and was a major hub for riverboat traffic to New Orleans. The ex-Confederates took control of Louisville’s social, business, and political life. In doing so, they instituted some Southern norms which had not previously existed in Louisville. After the war, most entertainment and social interactions became segregated. This was the atmosphere during the time Mildred was spending her Sundays in African-American churches transcribing spirituals.

Mildred was raised to be a free thinker. Her father, the Reverend William Wallace Hill, was criticized for allowing the teaching of geology at the Bellewood Female Seminary, a girls’ school he founded in Anchorage, Kentucky, just outside of Louisville. Mildred began her musical training at Bellewood. Shaken by the memory of widows left destitute after the war, Rev. Hill treated his four daughters and two sons equally, encouraging them all to develop careers. After his death, when Mildred was nineteen, the Hill sisters were determined to find work to support the family and put their two brothers through college.

Patty became principal of a demonstration kindergarten at the Louisville Free Kindergarten Association. She found the songs being used in class to be of poor quality and too hard for the children to sing. Between 1889 and 1893, she and Mildred collaborated on a number of songs more appropriate for the classroom. The Hill sisters used the street cries of black vendors for inspiration. These vendors usually had one line that they would repeat with variations. Patty’s lyrics were short and repetitive, making them easy for children to remember after hearing them only once or twice. Likewise, Mildred’s melodies were simple enough for small children to sing. In an 1895 letter, Mildred wrote, “I collected [the street cries] just for the interest I took in them never expecting to make any use of them but since I began the study of composition I have found them very useful.”

One of the first tunes the Hill sisters wrote was called “Good Morning to All”:

Although their compositions seem simple, the songs were developed through an exacting process. After a song was written, Patty—sometimes accompanied by Mildred—taught it to her class. If the students had trouble with any part of it, the sisters would revise the song and then present a new version. After they had a final version, Patty would sometimes write new verses to the melody for other occasions. “Good Morning to All” became “Good-bye to You,” “Happy Journey to You,” “Happy Christmas to You,” and “Happy Birthday to You.”

The recent discovery of Mildred Hill’s notebooks and compositions in the holdings of the Dwight Anderson Memorial Music Library at the University of Louisville confirms the influence of African-American music on the development of the famous song. “It is very clear that she was interested in all types of folk music, but particularly slave songs, hymns, and street cries,” said library director James Porcell. “There is a sort of scrapbook where she clipped and pasted all sorts of articles related to them, including her own.”

The Hill sisters’ publications and speeches on African-American music reveal that they accepted some racist concepts that were originally used to justify the institution of slavery and continued to be popular in educated circles in the decades following Emancipation. Chief among them was the cultural theory that African Americans were considered to be in a primitive state equivalent to a child in civilized society. This is one reason the Hill sisters thought black music would connect with young students. In an 1895 article concerning her field work on African-American street cries, Mildred wrote, “After all, for the negro is like a child, in that his tears and mirth follow each other so closely that it is difficult to keep pace with his moods.” She continued, “Evade it as we may, the fact remains that the genuine negro music is the most characteristic we have in this country.” Thus was the irony of the Hill sisters: they perpetuated ideas about racial inferiority while also recognizing the importance of black music to the future of American culture.

In 1892, Mildred wrote an article titled “Negro Music” for Music, a Chicago journal. She used the pseudonym Johann Tonsor because she was worried that her ideas wouldn’t be taken seriously if readers knew she was a woman. Two decades before the appearance of jazz, she claimed that the African-American sound would be the basis of American music in the next century. Mildred, who died in 1916, had no idea that one of her own African-American-influenced tunes would become an enduring part of popular culture.

In 1934, Patty Smith Hill attended a matinee performance of As Thousands Cheer, a musical revue by playwright Moss Hart and composer Irving Berlin. By then, she was in her mid-sixties and a professor at Columbia University’s Teachers College. During a scene depicting a birthday celebration for John D. Rockefeller, Hill watched in dismay as the cast sang “Happy Birthday to You.” The use of the song in a commercial environment shocked her. “I don’t think I ever heard it sung myself except when I heard it sung in As Thousands Cheer,” she said in a deposition for a lawsuit against producer Sam Harris. “I would read in the newspaper that on President Roosevelt’s birthday it was sung, and I know that it has been sung at dinners for adults, but I never heard it personally sung that I can remember for anything except educational conferences.”

The Harris case was the first of a series of lawsuits that established the Hill family’s stake in the ownership of the lyrics and the melody of the song. In 2016, U.S. District Judge George King ruled that “Happy Birthday to You” is now in the public domain based on the 1893 copyright for “Good Morning to All.” The decision reminded the public that “Happy Birthday,” one of the few songs that is still orally transmitted, is not in fact a folksong. It was written by two women from Kentucky, and now we also know that it was influenced by black culture. (ASCAP, or the American Society of Composers, Authors and Publishers, has called “Happy Birthday to You” the most popular song of the twentieth century.)

In a 2015 lecture on Mildred Hill, New York University professor Michael Beckerman said, “There is some sense that people probably have that ‘Happy Birthday’ is a white song or a product of white America. . . . I believe certainly now that the world’s most popular song has deep black roots, deep Louisville roots reflecting Mildred Hill’s lifetime commitment to African-American sound, which she believed . . . should be the future.”

Michael L. Jones is an award-winning freelance journalist. His most recent book, Louisville Jug Music: From Earl McDonald to the National Jubilee, received the 2015 Samuel Thomas Book Award for best local history from the Louisville Historical League. He is also a member of the Order of Kentucky Colonels.