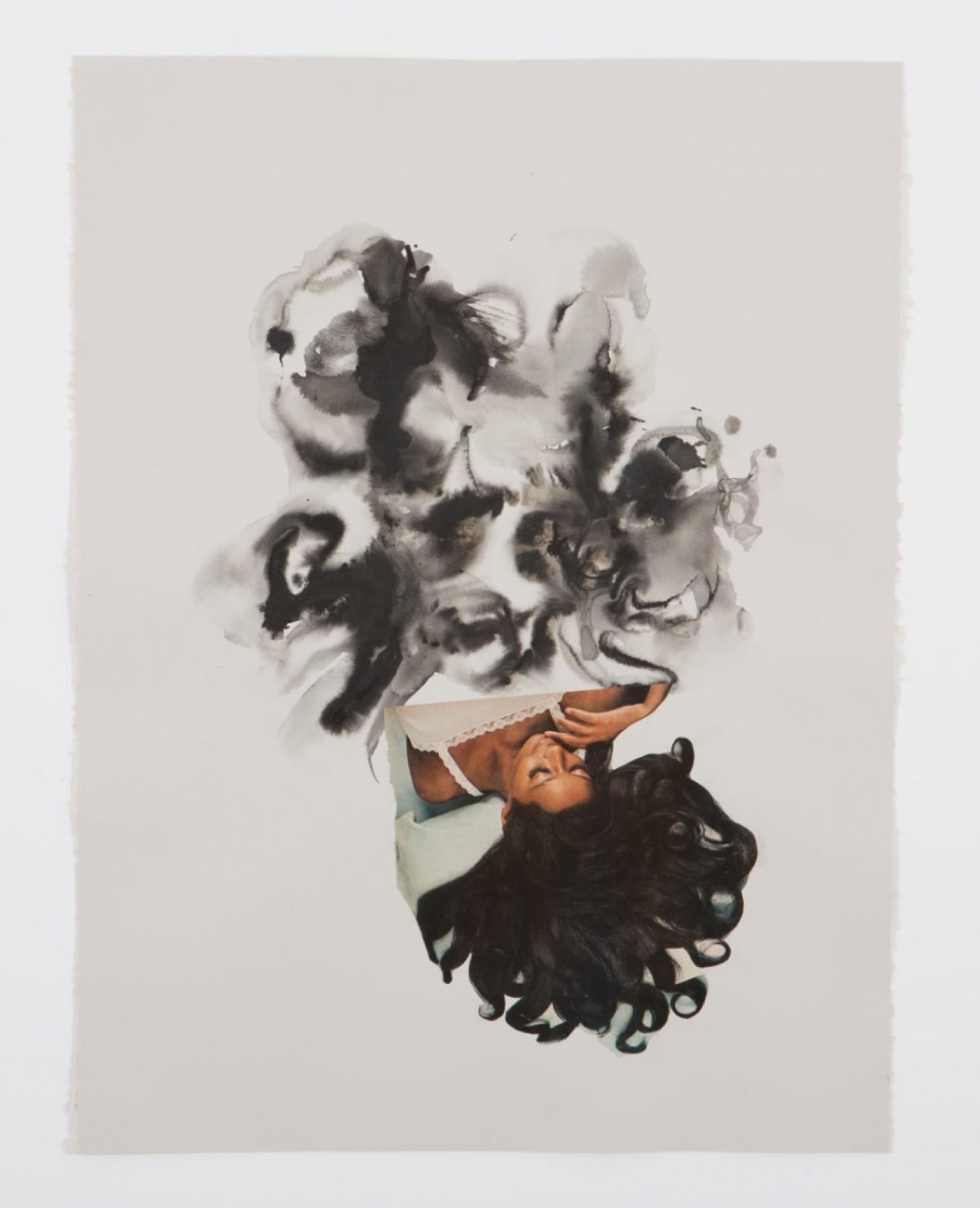 In public, she wore head wraps so tight they gave her headaches. Nevertheless, at some point, the hissing caused people to stop what they were doing and squint all around, in search of the sound that happened to be coming from her scalp. It was awkward, and also dangerous, for she was being hunted. Her assassin was said to be handsome and strong, armed with the sickle of Zeus and the winged sandals of Hermes, but so stupid he couldn’t pour piss out of a boot. That she’d eluded him this long seemed a testament to his stupidity.

Her last refuge had been a Northern city. The city had provided her with the anonymity she desired, but the numerous people provided opportunities for numerous mistakes. Every face was a face she might turn to stone, the second she was pushed from behind at the deli counter or cut off on the expressway. Her ire would rise and the snakes would writhe, bloodcool and lovely against her skull.

To manage her anger, she had a mantra: I am not a monster.

After the incident with the plumber, she wasn’t so sure. One minute he was demanding twice his quoted fee, the next minute he was statuary. She was left heaving in the aftermath, dizzied, horrified, as if the crime had been committed by someone else. There was nothing to do but jump in her car and follow the road map to a Southern hamlet, where there would be fewer faces.

And everything was fine for a while. In a corner of her yard, she grew her own tomatoes, string beans, and squash, and had the rest of her groceries delivered by one of the young store clerks. It was quiet out there, deathly quiet. She’d heard that people slept more soundly in the country, but the isolation made her wake up in a sweat, risen by dreams of sickles slicing her throat. At such times, the snakes massaged her scalp. She loved their gentle pressure, their nighttime fizzing, a lullaby that sent her off to sleep.

Out of loneliness, she struck up a courtship with the delivery guy. He wasn’t exactly her type, with his rangy, ruddy, farmboy looks, and the mesh jerseys he wore with nothing beneath. But she was bored out in the country. And it was nice to feel wanted.

On their second date, they were necking on her couch when one of the snakes slid out of her head wrap. The delivery guy jolted away and asked, as calmly as he could, why her hair was moving.

With a sigh, she unwrapped the fabric, letting the snakes spring to life, thirty-seven tongues snapping at air, and oh there was that look on his face, that crude, doltish look that always provoked a tingling in the tip of her nose, a heat in her cheeks, the beginning of something dangerous, something she could not control. One wrong word and she wouldn’t be able to stop herself, just one wrong word and—

“Wow,” he said. He reached out a hand and let a tongue flicker over his fingertip.

She slept with him that night, on the couch, amazed by the prospect that she was taking a lover.

He was a good listener, and he didn’t take it personally when she said that the sex was good not great.

It wasn’t his fault. Really the snakes were to blame, the way they’d watched and whispered encouragingly, looping around each other, as if charmed by flute-song. She didn’t know how to ignore them. But her lover had an idea.

The following week, when he dropped off her groceries, he also delivered a bath bomb. He’d crafted it himself, he said, using homegrown herbal remedies. As directed, she dropped the bomb into her bathwater. The salts crumbled and hissed; the snakes hissed back. Gradually the steam mixed with a muddy vegetal smell. She lay down in the water and propped her head against the tub, the snakes spreading and sipping until they fell asleep.

When she stepped out of the tub, the snakes didn’t lift away from her scalp. They didn’t pull and writhe in thirty-seven directions, didn’t fill her head with their sound. They lay limp as thirty-seven braids, but heavier, the way children are heavier in sleep.

There followed a blissful period, of lovemaking and spooning and driving through the countryside with the windows down, the snakes draped over her headrest to give her hairline a break. With her lover’s encouragement, she put away her head wraps and entered a new phase of freedom and self-discovery.

As she grew infatuated with him, the snakes grew infatuated with the bath bombs. She convinced herself that this was for the good. Weren’t they always trying to escape the head wrap? Especially Hektor—her favorite—who was always futzing through a gap in the fabric, the first to wake in the mornings, nuzzling her eyebrow in an effort to wake her too. These days, upon waking, the snakes were miserably hungover, hissing like thirty-seven fuses until she took a nice long bath.

In time, she and her lover developed an ease between them. Occasionally he got on her nerves, like when he wiped his face sweat on her bath towel or talked about fake news. Or when he bought her a pull-up bar as a spontaneous gift, even though she’d never shown interest in doing a pull-up. Sometimes she considered relocating to another town, eluding her lover and her assassin at once.

One evening, as she and her lover were watching a movie at her place, Hektor fell out of her head.

He lay stiffening in her lap, his eyes tight as stitches. She touched the stretch of skin he’d left behind on her scalp, smooth, as if he’d never been. The others went on sleeping.

She looked at her lover. “What have you done?”

“What you wanted,” he said, shrinking into the couch. “Right?”

She closed her eyes and felt the ancient trembling in her chest, the blood ticking in her ears, the living snakes beginning to stir. “Get out,” she said.

Her lover left in a hurry, taking the pull-up bar with him.

For a long time, she did not move, only held the snake in her upturned palms.

In the morning, the snakes that remained jerked her toward the tub, uninterested in the pain they caused her, selfish in their dying. If they had to die, they wanted to die in the tub. By the third day, all the snakes had fallen out and turned to bone.

She buried the bone snakes in her garden. In the night wind, her head felt cold and exposed, and though the snakes were gone, she could feel a twitching from the inside of her scalp, a phantom warning to flee. But what was the point? Her power had fizzled out, her scream gone silent. So she began to leave her doors unlocked and windows open, day and night, waiting for the end.

Years or months later—she’d lost track of time—she was lying in the tub when her assassin edged his way past the bathroom door, his sickle raised, careful not to look her in the eye.

“You don’t have to do that,” she said, her eyes dimmed to slits. “You can look.”

He squinted at her reflection in his shield, then dropped his arms and stared at her.

“What happened to you?” he said.

She shook her head. “Just make it quick.”

The longer he looked, the deeper his dismay. He’d imagined marble statues carved in his image, his fist gripping her head by the snakes. How would he hold a bald head? What kind of trophy would that make? She looked like—not a monster, but a beautiful baby.

Dazed and defeated, the hero departed the way he came, through the window she’d left open for him.

“Where are you going?” she said frantically, sitting up in the tub. She realized that he was never coming back, just like her lover, just like her thirty-seven loves.

In his absence, the bathroom felt terribly empty. Her hand drifted over her scalp and down to her soft, bare throat. She could slay herself. Or she could make hot chocolate. Or watch TV. As she spent another hour in the tub, doing none of these things, it seemed as though the emptiness gave her space to breathe, to fill, however she wanted to fill it.

And so, eventually, she pulled herself together, making a kind of life for herself in that small town. She missed the snakes, especially Hektor, though she had to admit, it was easier to move freely without them, buying groceries, attending protests, playing mahjong with some of the older women down the street. Everyone had stories about the girls they’d been—bright, impulsive, sexy, adventurous. When it was her turn to tell, she only said, with a hint of pride: “Oh me, I had a temper.”

Tania James is the author of three works of fiction, most recently the novel The Tusk That Did the Damage, which was named a Best Book of 2015 by the San Francisco Chronicle, the Guardian, and NPR.