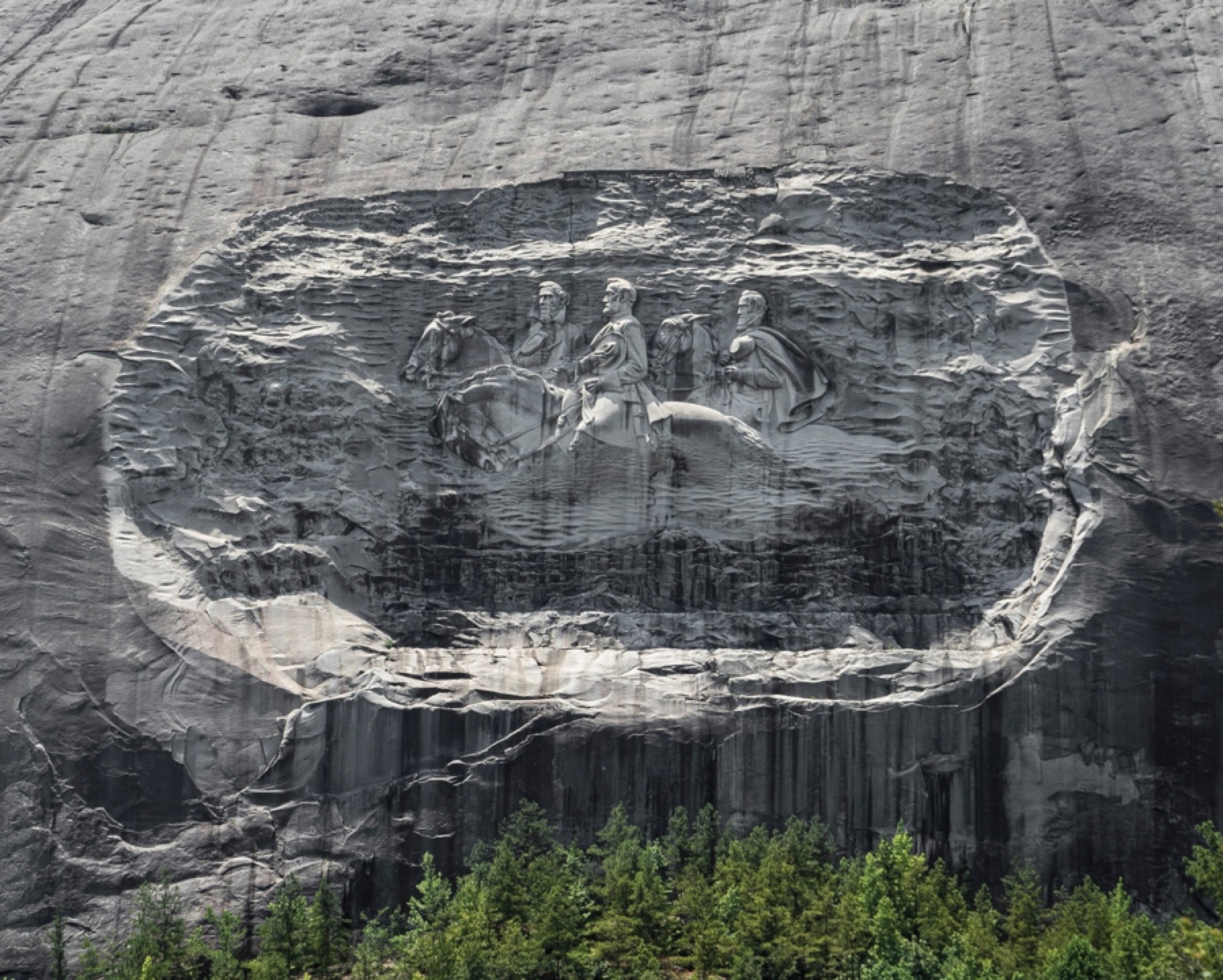 Photograph of Stone Mountain, Georgia, by Kris Graves. © The artist

Editor’s note: “Finding Southern Comfort,” the essay to which this piece is an addendum, appears here.

uch has changed in Stone Mountain since that piece was published in 1999, and much has not. The Confederate heroes still perch proudly on the mountainside, defacing the granite, mocking its full potential for glory. And yet the city surrounding the mountain keeps getting blacker and browner, fueled by a surge of immigrants from such countries as the Democratic Republic of Congo, Syria, Somalia, and Burma. The percentage of people in Stone Mountain who identify as Black is 78 percent, dwarfing a white population of 18 percent.

I now live in a small town just outside of Stone Mountain; called Pine Lake, it remains largely untouched by white flight. This little city—the population was 730 at the 2010 Census—is one of the smallest in Georgia, with 154 acres of land and 13 acres of water. And no matter how Black the surrounding city of Stone Mountain becomes, white Pine Lakers are not taking flight, not willing to give up their piece of paradise just thirty minutes from downtown Atlanta. As a result, Pine Lake’s demographics are starkly different from Stone Mountain’s: 87 percent of the population is white, and 9 percent is African American.

The lake is the epicenter of town. Neighbors gather there or meet spontaneously for evening walks, kayaking, and, in pre-COVID times, sunning and swimming at the man-made beach. People who are Pine Lakers by ZIP code welcome our mostly Black and brown Stone Mountain neighbors to walk the lake with us. This summer and fall, though, the lake rests while the city’s residents shelter in place.

I had been calling this time of quarantine The Great Pause, but America’s racial reckoning in the wake of George Floyd’s murder has turned this moment into what I’m now calling The Great Call. And my little city is answering that call, in big and small ways that make me feel uncharacteristically patriotic.

In Pine Lake, one in ten residents is an artist, and we are said to be the only city in the country with an all-women’s leadership team: mayor, police chief, judge, city council. Certainly, there are a few unfathomable white people who hoard up in their homes, their politics as much a mystery to their neighbors as what’s behind their boarded doors and grime-covered windows. But mostly Pine Lake is a quirky municipality of eclectic homes; goofy dogs; STACEY ABRAMS FOR GOVERNOR signs that residents can’t bring themselves to take down; a slew of LGBTQ+ folks feeling comfortable in their own skin; and “binders of women” feeling safe to walk alone at night.

A couple of Saturdays ago, the mayor—a lesbian singer/songwriter and deeply good person—came by my house for a socially distanced porch visit, and we talked about the state of our country. The following Monday, signs went up at the entrance to our community:

I am grateful to live in a place where local leaders try to do the right thing, even while our nation stumbles foolishly, painfully along.

Valerie Boyd directs the low-residency MFA program in narrative nonfiction at the University of Georgia. She is author of the critically acclaimed Wrapped in Rainbows: The Life of Zora Neale Hurston and editor of the forthcoming Gathering Blossoms Under Fire: The Journals of Alice Walker.