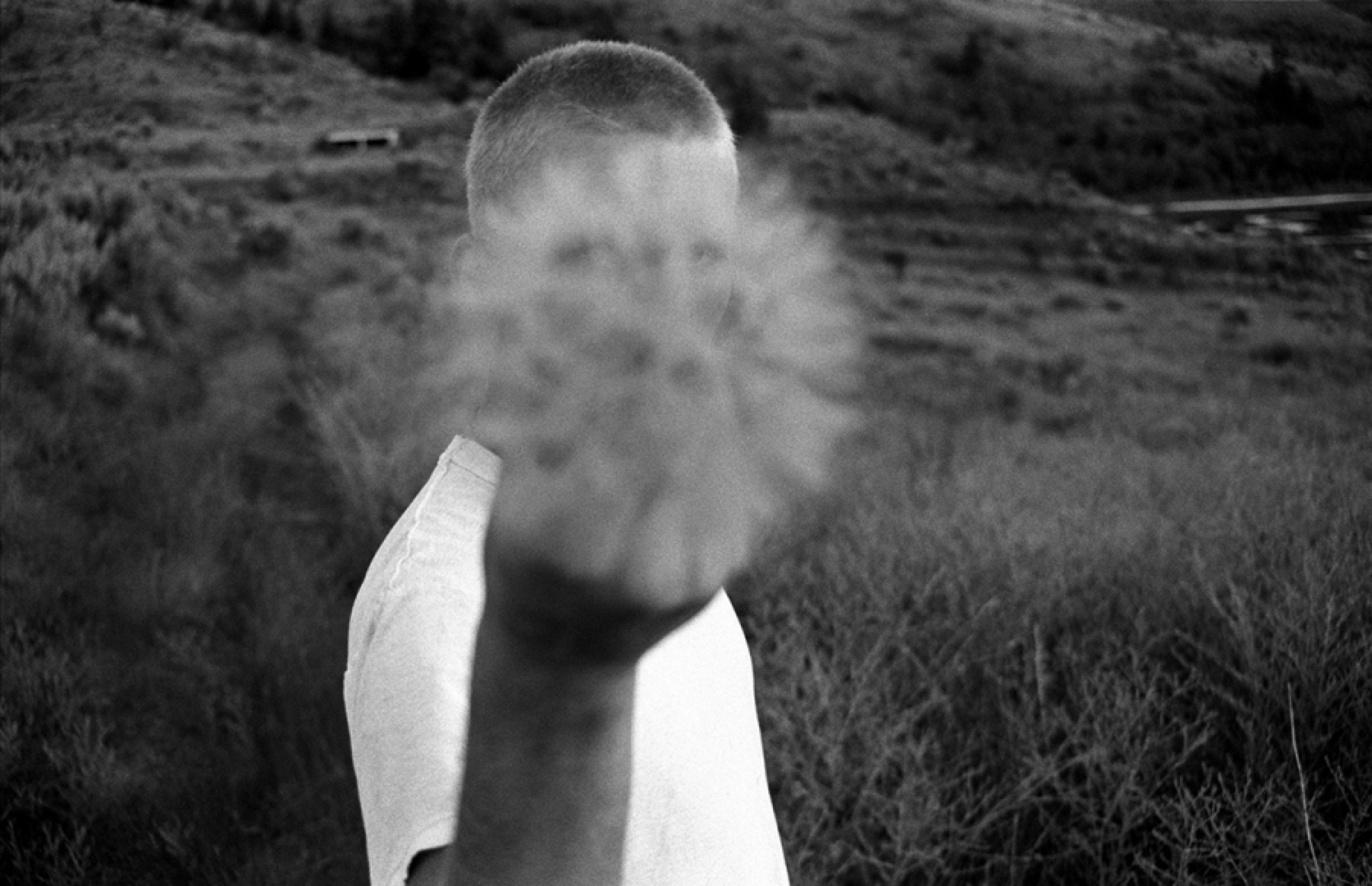 Every decent boy needs a chaotic idol, an angel of entropy. Every Tom Sawyer needs his Huck Finn. Mine was Charlie Cousins, a beaten-up-looking kid with freckles and a self-inflicted buzz cut. He was not in our bicycle gang and wouldn’t have been welcome in our tree fort back in the bamboo. He would have laughed at us anyway, with our training wheels and curfews.

Charlie seemed to be always on the move. Sometimes he’d appear from behind a dumpster or call down from the crown of a tree—you were always surprised that Charlie Cousins was still around, and you usually wanted to run. He survived on canned soup, jerky, and Charleston Chews, which he froze and then cracked on the sidewalk with a hammer.

In our Deep South subdivision this boy stood for wildness, for the lousy choices we could make, for rules that might be abused, for all the guarantees that really weren’t. Charlie was folklore to us: an ogre or faun that lived in the pines just outside our split-level enclave. A warning and a promise.

His father had fallen out of the sky over Vietnam around 1972, his older brother off a folding chair with a nylon cord around his neck. His mother fell and kept falling and even though Charlie dived in after he could never catch her, couldn’t reach her, and must have given up eventually if he is still with us. I have no way of knowing, four decades on, if he stuck around to see things through. But it was Cousins who told me—cryptically, knowingly—that there’s only one way to go out. I was nine and I wondered what he meant by out. Out where?

Our part of town was called Quinine Hills, so named because the elevation provided safe haven from malaria. Below the fall line lay vast tracts of swampland. Quinine Hills had been a refuge, an aerie, a place where rich lowcountry families could summer. But now it was under siege. In the early 1970s young families started moving into Columbia, South Carolina, from elsewhere. They came from the frosty Northeast, the suspiciously kind Midwest, Atlanta—lured in by the university or some new hospital, by real estate and weather. We were Catholics, Jews, and Other, and we were on the front range of the New South.

Some natives greeted the newcomers like an invasive species, with disdain and curiosity. They ate strange foods, talked about opening community theaters and food co-ops. In turn, the newcomers treated the locals with detached amusement and fear. They couldn’t believe this town had never staged Equus or tasted tofu.

Charlie Cousins lived maybe a quarter mile away, just inside native territory. The streets were close and steep and secretive. Most of his neighbors were elderly, and the neighborhood suffered its own kind of entropy. Fire-ant hills erupted through patchy lawns, pine needles bristled in the gutters, paint peeled. A daily visit from the ambulance brought eager old faces to the windows.

Charlie had no friends, did nothing to court them. Enemies were what he required. He roamed the streets as if he were on patrol, in an oversized combat jacket, an operative grenade clipped to the lapel. He spoke the kind of German you learn from war comics. Sgt. Rock, Invaders, Weird War Tales.

One January a freak winter storm walked all over the Southeast. We woke up under three inches of white like I had never seen. My neighbor Bobby helped me build a snow fort, and the two of us sat inside breathing in the hush and the odd blue light, a sense of total isolation. Inevitably the day turned warm and the snow melted into a slush that soaked through our underpants. But still we didn’t leave. When you’re a boy you’ll enjoy any shitty little world as long as you made it yourself.

By two the mercury had risen into the fifties. The back wall of our igloo collapsed and Bobby’s mom made him come inside. I sat there with sandwich bags over my feet, sat there in my mother’s knit hat feeling like the lone survivor in a Jack London story. I wouldn’t give up this day easily; I had made a safe place for myself in a hostile world, and it might never snow again.

All I could do was wait for a suitable ending to a good day. When it came it was Charlie Cousins. He was screaming comic-book German, and he demolished my fort in a hail of ice grenades. I know now that this act was every piece of misfortune the boy had ever been put through. Tamped down with wadding and lit. But back then all I saw was a free boy, nobody’s boy, grinning at me over his big lapels, so pleased with his blitzkrieg. We played till dark. Then I ran back to my warm home, to an early bath and pajamas, as happy as a child could be. I had been outside, and now I was in.

The next time I saw Charlie Cousins I was walking home from the bus stop. It was springtime at a latitude where that means something. Azaleas shouted at you from every curb. Squirrel pups spilled from their nests, spotted deer gnawed at patio moss. Charlie appeared before me as he often did, from behind a trash can.

When he asked me over to his house, I couldn’t think of a reason to refuse. And maybe some part of me thought that something final and structural would snap if I turned him down. His house smelled like the damp clay my mother brought home from pottery class. A little light pushed through dense brown curtains. The ceiling was a presence that you felt, and his mother was out. I followed Charlie through a sunken living room with enough furniture for a family of four. L-shaped sofa, matching corduroy recliners, console stereo. His bedroom sat off the kitchen.

Charlie kicked a path through torn comics and half-made model planes and began the ritual of inventory. A boy must show his things. He owned Battleship, Mastermind, and Risk, an army blanket and a canteen, sharks’ teeth and a hunk of petrified wood that resembled a penis. He showed me a cologne bottle shaped like a jet fighter, a book about puppets, a revolver he’d taped to the back of his dresser. My eyes hung on the innocent objects.

Bobby said Charlie Cousins would give you anything he owned if you looked at it long enough. I couldn’t imagine that this was true—what sort of boy gave his stuff away?—but I was determined to test it out. I fixed my sights on his dresser, on three figurines someone must have mail-ordered from Battle Creek, Michigan. Snap, Crackle & Pop. Each elf was the size of a spool of thread and had been milled from wood. Their peaked caps and vests were felt. I left a few minutes later gripping Crackle in the pocket of my windbreaker and never returned to Charlie Cousins’s house again. That night at dinner, my dad, who had worked as a high school counselor, said giving things away was a sign. But he never said of what.

Here’s one ending, the only ending I know. In high school Cousins found a girlfriend. I know this because the last I’d heard he’d shot her. She was leaving a party with another boy, and Charlie fired a pistol at the car. A bullet passed through the back seat and entered her shoulder. The girl did not die. I think it must have been a hatchback. The police tracked Charlie Cousins to his house, but he wouldn’t let them in. His mother was not home and he’d taken out his revolver. He did this while the local news watched, while the city stared, for hours, until the police finally rushed the house and subdued the boy.

Alone he’d defended his shitty little world, the same way I’d sat out the thaw in my igloo. I never thought Charlie had much to defend. But he was the only person I’d known who almost died defending it. Cousins had his own idols of entropy. His own dark woods that he should not enter. His own ogres, that were the cops or the Viet Cong or a length of nylon cord. I never understood that Charlie Cousins was an actual boy. To me he was only a point on my moral compass, a surveyor’s stake marking the boundary between my neighborhood and chaos. It is arrogant to use other people’s lives as margins, but we do it all the time. We line them up at a safe distance, never imagining they are real, too—with their own territory to defend, with beginnings and endings. In his advanced age, Tom Sawyer never sat in a powdery armchair wondering about his old friend. Never stared out at the snow from his Connecticut parlor thinking: What ever became of that boy, Huck Finn? I’ll think about it, from time to time: How long did Charlie Cousins last? Did he survive, make a good life for himself? Or was there no better life than the one he defended the night he shot the girl and waited in his bedroom for the cops to take him away?

Jeffrey Rotter is the author of The Unknown Knowns, a novel. He lives and writes in Brooklyn.