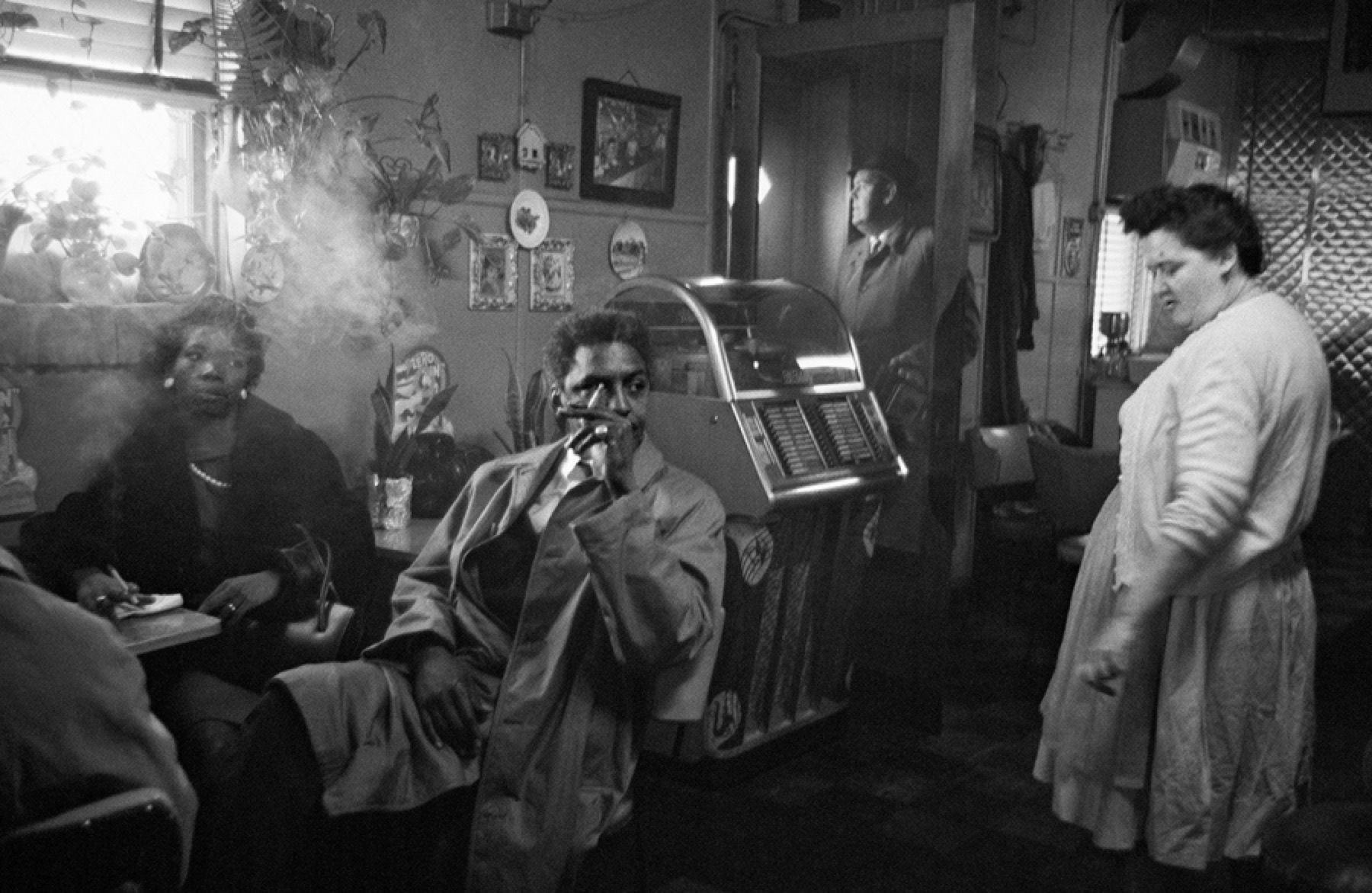 “At first, I couldn’t come in a place like this,” Helen Summerville told me one recent afternoon as she forked into a mound of cornbread dressing and giblet gravy at Kairos Kafe on the south side of Birmingham, Alabama. “And then, for a while, I wouldn’t come in,” she said. “None of that matters now.” Prior to passage of the Civil Rights Act of 1964, Summerville, who is black, would not have been served in most white-owned dining rooms in Birmingham. Back then, Ollie’s Bar-B-Q—which was open from 1926 through 2001 and claimed three locations in this neighborhood, including the one now occupied by Kairos—was among the staunchest defenders of the Jim Crow laws and practices that dictated separate eating facilities for whites and blacks.

Next year, the nation will commemorate the 50th anniversary of restaurant desegregation. Documentarians will dig for news footage of protests at lunch counters, barbecue huts, and steam table cafeterias. Politicians will stage photo ops at restaurants where blacks and whites now eat together in harmony. (But because many restaurants in the region have resegregated along class lines, those events may have to be staged at fast-food spots.) City planners, now attempting to revive diminished black business districts like Farish Street in Jackson, Mississippi, will take stock of the economic clout that was lost when white restaurants and other businesses integrated and began drawing black patrons. So will black business owners, who recognize that the end of segregation spelled the end of their captive clientele. On a recent walk down Farish Street, I spoke to Geno Lee, proprietor of the Big Apple Inn, which has been selling pig-ear sandwiches and hot tamales since 1939. “The Civil Rights Act of 1964 was great for the black race,” he told me, “and horrible for black businesses.”

In the midst of an American nostalgia movement that celebrates smallholding farms, domestic crafts, artisanal goods, and vestigial tastes, the South often serves as a cultural and culinary redoubt. Writers use terms like “lardcore” to describe an insular and contrary initiative to revive the traditional cookery of the region. But the South has more to teach the nation than how to properly skillet-fry a chicken.

Understanding today’s good food movement, which draws strength and inspiration from Berkeley, California, and Brooklyn, New York, requires a modest rethinking of popular history. It’s not top of mind for contemporary activists, but the civil rights movement, which played out most dramatically in the South, proved signal in the politicization of American food culture, and foreshadowed the activism that now roils modern decisions about diet and agriculture. The events of 1964 bring that into relief. So do stories of Birmingham, where Ollie’s was a segregationist bulwark. When President Johnson signed the Act on July 2, he outlawed discrimination and segregation in places of public accommodation that were engaged in interstate commerce. But nearly six months passed before the McClung family, proprietors of Ollie’s, ceded to a Supreme Court ruling and seated five black customers at lunch on December 16.

That lunch marked a transition from a time when citizens like Helen Summerville could not claim a seat in Ollie’s dining room, to a mid-1960s moment when they could entertain and reject the offer. It also set the stage for today, when a restaurant like Kairos—which shares one of the old Ollie’s locations with the Grace and Truth Church, where drum kits and electric guitars propel Sunday morning worship services—serves fried green tomatoes, barbecue chicken sandwiches, and cornbread popovers with strawberry butter to an integrated crowd.

Much that transpired in the South in the 1960s presaged the recent embrace, by producers and consumers, of food as a fulcrum for creative expression and political activism. The sit-in movement, which ignited in Greensboro, North Carolina, in 1960, focused attention on lunch counters, democratic spaces by design, where all were supposedly welcome. Among the questions protestors asked were: In a region where blacks had long been servants, would whites accept blacks as full-fledged consumers? And, in a region where the welcome table metaphor is resonant, who gets to claim a seat alongside whom? Before Alice Waters challenged the free-love set to liberate all the senses, including taste; before Cesar Chavez led California grape pickers in their Sacramento march for workers’ rights; and, yes, long before food became integral to activist dialogues in other locales, the response of whites, who dumped ketchup on the heads of activists or spat on the napes of their necks in cities like Jackson and Nashville, made clear that eating was already a political act in the South.

Activists recognized that eating in public with a person of another race was transgressive. They recognized, too, that eating with strangers, especially in the close quarters of a lunch counter, was a deeply intimate act. “Boy, them goddamned Dixiecrats’ll sleep with ’em at night and eat the breakfast they give ’em the next morning,” Alabama Governor Jim Folsom told a colleague back in 1954. “But they’ll never let ’em sit down to eat with ’em. That’s the difference. Letting ’em sit down.”

At a 1960 meeting of student activists, Ella Baker argued that sit-ins were “concerned with something much bigger than a hamburger.” Activists wanted “to rid America of the scourge of racial segregation and discrimination—not only at lunch counters, but in every aspect of life.” Production, as well as consumption, was contentious. Fannie Lou Hamer, who led the Mississippi Freedom Democratic Party at the 1964 Democratic convention, and who summarized the civil rights movement impulse when she said that she was “sick and tired of being sick and tired,” set precedents for our current dialogues about food sovereignty.

Like Martin Luther King Jr., who refocused efforts on economic parity during his late-career Poor People’s Campaign, Hamer argued that black Southerners and other poor and marginalized folk could not achieve full citizenship until they controlled their own food systems. “You can give a man some food and he’ll eat it,” she said. “Then he’ll only get hungry again. But give a man some ground of his own and a hoe and he’ll never go hungry again.” Hamer’s Freedom Farm and Pig Bank efforts, focused in the Delta region of Mississippi, foreshadowed the current vogue of community-supported agriculture and its embellishments, including community-supported butchery and whole-hog cookery.

The Freedom Farm was a tangled experiment in cooperative agriculture. But her Pig Bank, which began in 1968, was bold and simple. Working with fifty gilts and five boars, she loaned impregnated females to impoverished families, who returned the mother pigs to the bank, kept the resulting piglets as dividends, and butchered those dividends once they reached an acceptable weight.

Hamer’s idea was to grow the working-class food supply. And it worked, until, like many 1960s initiatives, the Pig Bank lost traction in the 1970s as the civil rights movement decentralized and ceded leadership to the Black Power movement. Today, Pig Bank-like ideas effect change in the South and beyond. Little Rock–based Heifer International, which began comparable work in the 1940s, now designs and executes livestock-seeding strategies in more than forty countries around the world.

Food and politics have long intertwined in the South. Organizations like the Southern Tenant Farmers Union, which rose to prominence in the 1930s, argued that farming your own land was an act of economic self-determination. By January 1931, Arkansas sharecroppers were staging organized uprisings that captured the attention of the Communist party, then gathering strength in the South. “Organize hunger marches on the towns to demand food and clothing from the supply merchants and bankers who have sucked you dry every year,” a Birmingham party leader exhorted. “Join hands with the unemployed workers of the towns and with their organizations which are fighting the same battle for bread.”

The civil rights movement of the 1960s took a different tack. Activists of that era made their struggles explicit through stories of white resistance and black persistence, told in view of a television camera. The fight over Ollie’s was just one example. And it was a comparatively tame one. During the summer of 1964, Lester Maddox of Atlanta, who wielded a pickaxe handle that year to repel the integration of his Pickrick Cafeteria, and who subsequently published “If I Go to Jail,” a 33 r.p.m. recording of his thoughts on the matter, emerged as the poster boy for segregated restaurants. In the process, he leveraged that notoriety to earn election as governor of Georgia in 1966.

When it comes to Maddox, I’m a man of many perversions: I keep a copy of that album in my writing shed, just above a portrait of my wife in high school, wearing a sequined flag twirler outfit and white leather boots, strutting down the football field. And I own a souvenir Maddox pickaxe handle, signed by the former governor in the shaky script of his later years. Of course, I’m not the only one building a collection of artifacts from that era. Over the last two generations, as massive white resistance to integration has given way to acceptance, reflection, and celebration, the South has built museums, notably in Birmingham and Greensboro, focused on the civil rights movement. In these cities, where activists fought over restaurant access and consumer rights, museum designers have focused marginal attention on the linkages between food and justice.

On a recent tour, Bamidele Demerson, executive director of the International Civil Rights Center & Museum in Greensboro, set in the former Woolworth’s store where the sit-in movement ignited, referred to the restored lunch counter at the heart of the museum as “our largest single artifact.” He said it off-handedly, echoing comments made by other museum curators and some civil rights historians. By their calculus, food was not the fight, food was the prop. And restaurants were mere backdrops for the larger struggle, not sites of import that compelled action.

Over the last five decades, the South has changed in ways both calculated and unwitting. And so have the restaurants of the region. Today, barbecue endures as a totemic folk food, but the model practitioners in cities like Atlanta are sometimes Korean. Taking into account health concerns about pork consumption, the meat of choice at a number of black-owned barbecue restaurants across the region is now turkey.

Some of the changes are symbolic but no less compelling. Moore’s Barbecue in New Bern, North Carolina, which L. J. Moore tore down in 1967 rather than integrate, built integrated facilities when it moved down the road in the 1970s. Years later, the city renamed that stretch of roadway Martin Luther King Jr. Boulevard.

Back in the 1960s, when Ollie’s was in the spotlight, the McClung family displayed a giant sign embossed with a globe and a slogan that read, “World’s Best Bar-B-Q.” Today, Kairos Kafe displays a far smaller sign that reads like a promise of the progressive role food might play in the future of the South. It says “Building Relationships Around Food.”