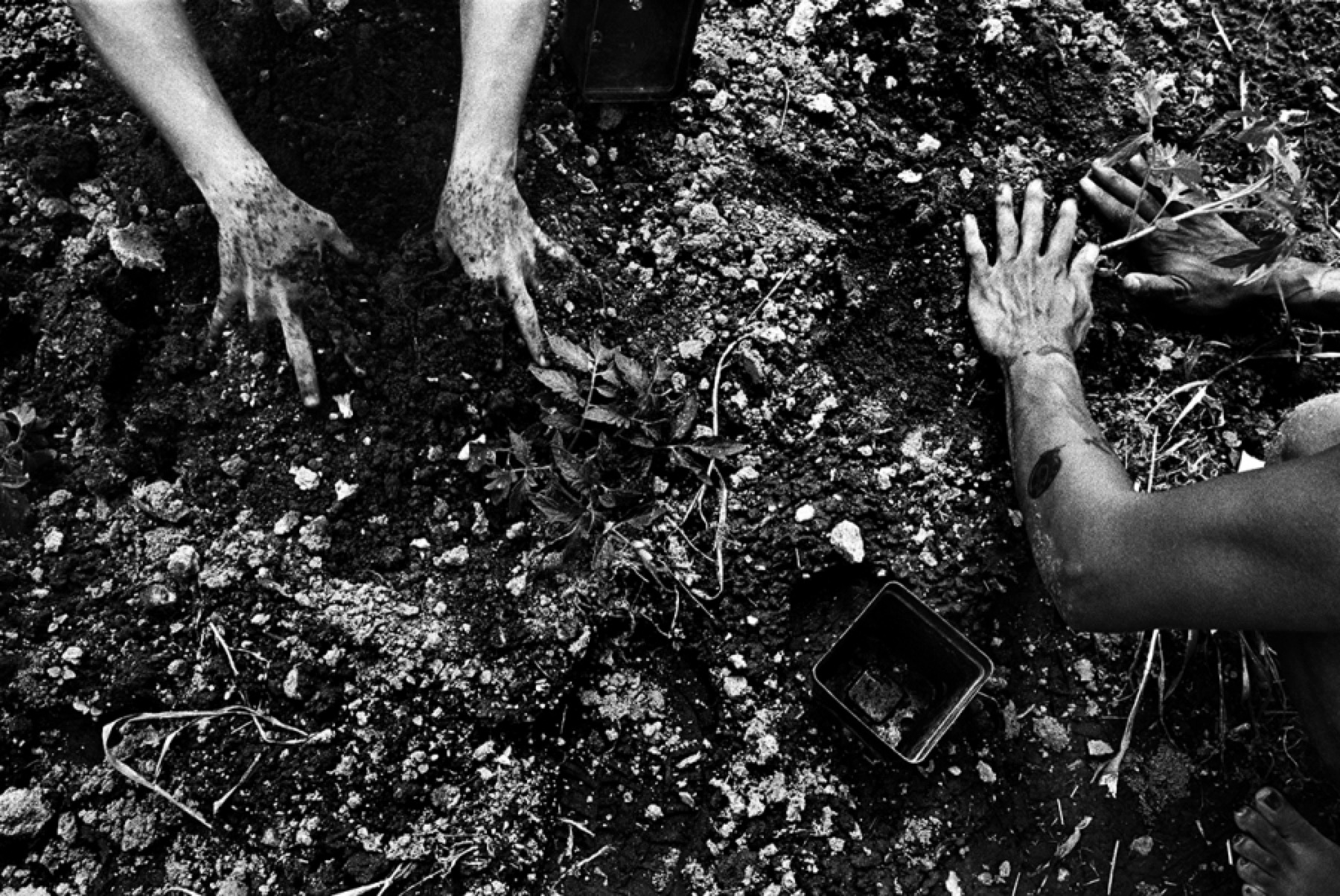 When there was practically nothing else in Appalachia, there were beans. They were food, yes—cheap protein that grew like a weed—but not just that. During the Great Depression, when Bill Best was a child in Upper Crab Tree, North Carolina, your beans were your flag: of region, of state, of community, of clan. Your beans might’ve been named after your mountain or your mother; they might’ve been swapped at family reunions or church gatherings. Politicians would hand them out, as would preachers house-hopping for Sunday suppers. It was an honor to receive someone’s favorite seeds, and it was a shame to have none of your own. “Only the sorriest man would eat his seed corn,” they used to say when Best was growing up. Corn or bean, the meaning was the same: that man lacked foresight. He was shiftless.

Bill Best, who founded the Sustainable Mountain Agriculture Center, saves seeds—not in the way that people save stamps or coins, but in the way that people save endangered species, or possessions from a fire. He grows and stores about 700 varieties of beans on his farm in Berea, Kentucky, where he lives with Irmgard, his wife of fifty-one years, in a midcentury ranch house she designed, with stone chimneys he built. Some of his seeds are more than 150 years old—one goes back to the American Revolution. For the most part, they still grow as they always have. Not all of them grow on his land; many come from exchanges with other savers. Through his nonprofit, he sells them to enthusiasts, newcomers or experienced gardeners or canners, most of whom want to taste once more the meals their mothers prepared, or to access some other memory from childhood, a memory that holds in it all the immensity of the everyday. In this transaction, Best is something like the madeleine peddler of Appalachia. When Best’s seeds started getting attention, after the Rural Kentuckian published an article about him in 1988, he received eighty-six letters from six states and answered them all. The letters still come today.

Heirloom beans are widely named after family matriarchs, and Best’s mother, Margaret, has two: the Margaret Best greasy bean (“greasy” because of its slick hull) and the Margaret Best cut-short, a style named for its squared-off ends. Stored together, cut-shorts sit in tidy, end-to-end formations, which Best demonstrates by lining up the middle knuckles of both fists, his seventy-eight-year-old fingers stacked thick and flush as new erasers. Margaret Best raised five children, of whom Bill was the eldest. She tended several gardens on their small, self-sufficient farm, where her husband had enough of a tobacco allotment to pay the land tax, maybe put gas in the truck. Margaret canned vegetables and meat, made the children’s clothes out of cotton feed sacks, and kept chickens and pigs—Best can’t recall eating beef before he went off to Berea College in Berea, Kentucky, about three hours away from home. Margaret also spoiled her firstborn for beans. As an adult, Bill couldn’t bear the tough and tasteless ones that he initially grew, from commercial seeds, on the farm that he and Irmgard co-owned in Jackson County, Kentucky. That Thanksgiving, in 1963, he complained to his mother, and she gave him some of her seeds, which she got from her mother, and from cousins and acquaintances she’d trade with at family reunions or church meetings. Bill started planting them on his land, and then he started selling them at the farmers’ markets he helped start in Berea and Lexington. Word got around. People wanted to trade. Fifty years later, Best has gathered an edible representation of Appalachia that occupies six freezers.

The seed-saving process is straightforward and time-tested. You wait until the beans are full, which means that the seeds are fully formed but the hull is still tender. (Modern commercial seeds are bred for easier mechanized harvest, a practice that makes the beans tough and nutritionally null, and that causes much rancor for Best; a hobby satirist, he wrote a version of “Jack and the Beanstalk” in which Jack is nearly bested by Sanmonto, Gillcar, and AgraCon, evil giants chauffeured about by a Supreme Court justice.) When your beans are full, let them dry a bit on the vine, then pick them and let them dry some more. At Best’s farm, this happens on chicken-wire trays lined with old pages of the Lexington Herald-Leader. Finally, shell, sort, and freeze them in airtight containers.

Best’s seeds are all heirlooms, a word that gives the seeds the ring of treasures instead of orphans and that often says more about the way things are than the way they were. The truth is, Best’s seeds received no special treatment before he came along, not on this scale. Perhaps because so many people, like Best’s own sister, abandoned growing beans—growing anything—since that was something poor people did; they’d had enough poverty to last a lifetime. This association seems inevitable, but Best swears it never occurred to him. He always thought he was eating the freshest food around. Why would he stop?

It was nearly ten years after graduation when Best’s friends from Berea College started committing suicide, a trend that continued for another twenty years, six deaths in all. A musician friend who grew up eight miles from the Bests blew himself in two in a funeral-home parking lot. A fellow biology and physical-education major overdosed. She and Best performed together a lot in school—tumbling, gymnastics, dance. She was from West Virginia, and Best remembers how she wouldn’t let her college boyfriend, the son of a dean, visit her family home. My parents let chickens run around the yard, she told him. Of course, that’s trendy now.

The Berea faculty of his college years were “missionaries of the middle class,” Best says, springing Appalachia’s youth from their ancestral traps and toward the kind of generic American dream that sells picture frames and minivans. Some of his classmates wanted so much to leave their pasts that they’d work on campus through school holidays, but for Best—a young man who performed in both traditional folk- and square-dancing troupes and in modern and aquatic ones—past and future weren’t so binary. His friends found this worrying, and occasionally, briefly, he would wonder if they were right, if he was the one who had it backward. But Best is stubborn and he has a long memory. Even as a young man, he mostly still felt like the kid he’d been in Upper Crab Tree. One day, when he was six, his grandfather took him to catch the school bus, but the driver didn’t stop, he just drove on past like they weren’t there, and his grandfather was angry. “You’re better than nobody,” he said, “but you’re just as good as anybody.” In 1973, fourteen years after graduating from Berea, Best earned an Ed.D. in Appalachian Studies from the University of Massachusetts.

When he got back to Kentucky, he started writing about Appalachia, and his pieces got published. One former professor told him he was disrespecting the teachers who had tried to help him get away. (“I wasn’t putting Berea down, I was building Appalachia up,” he said.) Best was in his fifties when an old physics professor confronted him at the post office: Berea was supposed to be your way out, not your way back.

His Appalachian Studies dissertation was called “From Existence to Essence,” and it examined a lot of the ideas that his friends’ deaths have made him revisit: identity, self-discovery, the work of making peace. Best would like to write about all this, but that’d mean calling the dead by name, and he’s not sure he wants to do that, even now. But he thinks he understands how these people, his people, might have felt—inasmuch as these things can be understood, of course, at a tethered remove, with the emphasis on intellectual clarity. “They were strangers in their own land,” he said. “Reconciliation was not possible.”

William Henry Conover was a Civil War soldier who found himself in New Orleans when the fighting ended. As the story goes, he walked back to his Kentucky home over a period of months, liberating butter beans from farms and gardens along the way. He might have done this honestly, by asking or by trading, or he might’ve snuck onto people’s property in the night. Hard to say. But by the time he got back home, he had ten: the Conover butter beans. We know this because they still grow today, and because Best got the story from Conover’s great-grandson.

The Appalachian seed-saving community is full of tales like this, specimens that have been swiped from a neighbor’s yard or brought back from the brink. By the time Best rescued a seed called the noble bean, it had traveled from West Virginia to Oregon and hadn’t grown for seventeen years. A woman sent him three hundred of its seeds. Most every noble bean that’s grown since comes from one of the six that survived.

Ask almost any Appalachian how to eat beans and you’ll get one answer: in a bowl, with cornbread. Some people might tell you to add chopped onion. (Best’s sister, who returned to growing beans in her later years, adds olive oil.) Beans lack the breathless, canvas-tote allure of heirloom tomatoes, those divas of the farmers’ market; really, they’re a workhorse crop. So why does Best get orders from Washington to New Zealand? Why do people send him seeds in elaborate packages, unburdening onto him their adolescent memories and family lore?

Best is fond of allegories, like his retooling of “Jack and the Beanstalk.” He appreciates how they make difficult messages easier to comprehend, like how a Fox bean can represent generations of family you never even met or how a Cumberland Plateau bean, such as the turkey crawl, can signify a home decades lost. When Best was explaining how he revived the noble bean, I asked about the soil he used; he said that it’s low on clay, a mineral so hard that, in trying to push through it, a seed can break its own back.

Bean seeds require of their keepers little and much at once: they can be waterlogged and forgotten until they could legally drive a car, and yet they’ll still come back to life. But once they do, the beneficiary of this reward has to soak and cook them for hours before claiming it. Appalachian grandmothers did this overnight, night after night, because theirs was the food of patience and persistence. Not of plenty, but of enough. William Henry Conover could’ve intuited all this, or he could’ve just been a hungry soldier, or a klepto. It doesn’t matter now. His seeds are proof of his tribe, as much an explanation as the letters that people send to Bill Best, keeper of tradition, giver of communion, grower of the tastiest half-runners in eastern Kentucky.

Courtney Balestier is a food and culture writer whose work has appeared in Lucky Peach, the New York Times, Saveur, Gastronomica, and has been anthologized in Cornbread Nation 7: The Best of Southern Food Writing. She is from West Virginia and currently lives and works in Detroit.