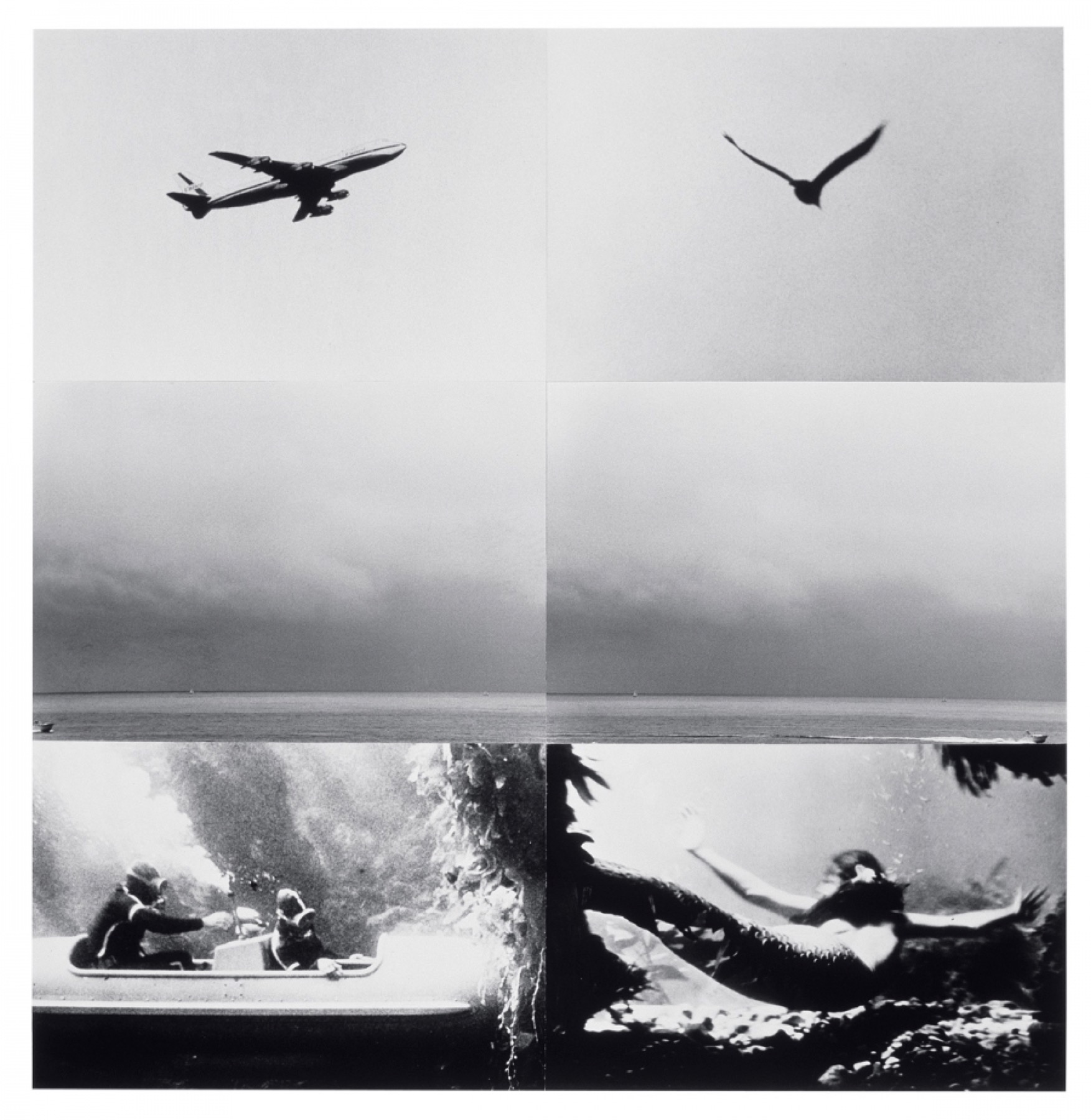 "Concerning Diachronic/Synchronic Time: Above, On, Under (with Mermaid)" (1976), by John Baldessari. Courtesy of the artist

Their first months of ecstatic infatuation, Girl and Boy were the type of people to scorn that most standard of cocktail-party questions: what-do-you-do? Rather than answer directly, they’d discuss their curiosities and visions. Human existence, they believed, was far too complex for the flattening language of economic occupation. To reduce it as such was so derivative, so clichéd. So American! When it later became clear how derivative, clichéd, and perhaps American they were behaving, earnestly discussing the mysteries of life while sipping boxed chardonnay at noisy gallery openings and roof deck parties, they laughed at their younger, clumsy attempts at originality. By then they’d set their sights on a different question: how’d-you-two-meet? People—strangers even—noticed their glow and felt they had the right to ask.

“Mets game,” Boy told Roommate after Girl first slept over. “They put us on the Kiss Cam, thought we were a couple. All Shea Stadium was watching. We couldn’t disappoint.”

“Earth Day,” Girl told Realtor after she and Boy decided separate apartments no longer made sense. “My sign said Save the Glaciers. His said Hug a Whale.”

How’d-you-two-meet became a game, a challenge, an exercise in imagination, a habit.

Girl, talking to Mom in Miami, after describing the ring: “Pet store. He’s a bulldog guy.”

Boy, on their Italian honeymoon, to the ex-pats who pegged them for fellow Americans: “Nevada. I was hitchhiking, thumb aimed to heaven. She was an angel driving cross-country.”

Girl, to the Italians: “On the flight here from New York. He proposed during takeoff.”

Boy, to B&B Owner, during their five-year-anniversary weekend at the shore: “Iraq, third tour. I took a round to the butt. She was the field surgeon. We got to know each other real fast.”

Their boldness delighted them. Other times, usually after a heavy, regrettable meal, or a fight, they felt less creative: then they’d simply have met at the gym. Online. A bar. AA.

Girl, to Marriage Counselor: “A meditation retreat. No talking or eye contact between practitioners was allowed. But he slipped a note onto my mat—Meet me in Nirvana for a drink?”

Boy, to Son, at age five: “Your mother was a mermaid. I was the lucky guy on the beach when she came up for air. Look closely and you can still see ocean in her eyes.”

Girl, to Granddaughter, at age six: “We met at the sushi buffet on Noah’s Ark” (“Kidding,” Girl later amended to skeptical Granddaughter, “We’re old, but not that old”).

Oh, but then they are. And, as happens, the many strands of the past snarl and knot into a hopeless spaghetti bowl of memory. When Meals-on-Wheels Volunteer makes pleasant chitchat during his deliveries, asks how’d-you-two-meet, Boy and Girl can’t distinguish the real from the imagined. Boy recalls a noisy party, downing three chardonnays for courage, approaching Girl. Girl recalls playful small talk, then someone irritatingly intruding, asking, of all things, what-do-you-do? Boy, she remembers, said he was developing an immortality potion because there was so much he wanted to experience in life. To which Boy recalls Girl saying, But we don’t die. We’re like butterflies, drifting in the wind from one flower to the next. So let’s refresh our drinks, gorgeous, and someday I’ll find you again. These things they remember.

But they also remember the Kiss Cam. And Boy recalls the hot Nevada sun, the ache of his thumb, the crunch of tires on roadside gravel. Girl remembers emerging from the sea, her long mermaid hair tangled with kelp and salt. She knows that fizzy gin-and-tonic Nirvana buzz.

Meals-on-Wheels Volunteer listens and smiles. He notices Boy and Girl holding hands beneath the table. “However it happened, you two love birds met. What else matters, am I right?”

Boy and Girl think he must be right. They feel lucky without knowing exactly why. Probably because Meals-on-Wheels Volunteer has the most wonderful smile, and his voice is so gentle. He washes their dishes sometimes, once took out the kitchen trash. Double-checks to make sure the refrigerator door is shut tight. The little gestures. Girl and Boy don’t forget.

Enjoy this story? Order from the archive.

Nick Fuller Googins is a freshly minted graduate of the Rutgers-Newark MFA Program. His short stories have been read on NPR’s All Things Considered and have appeared in Narrative Magazine, ZYZZYVA, HOOT, and elsewhere.