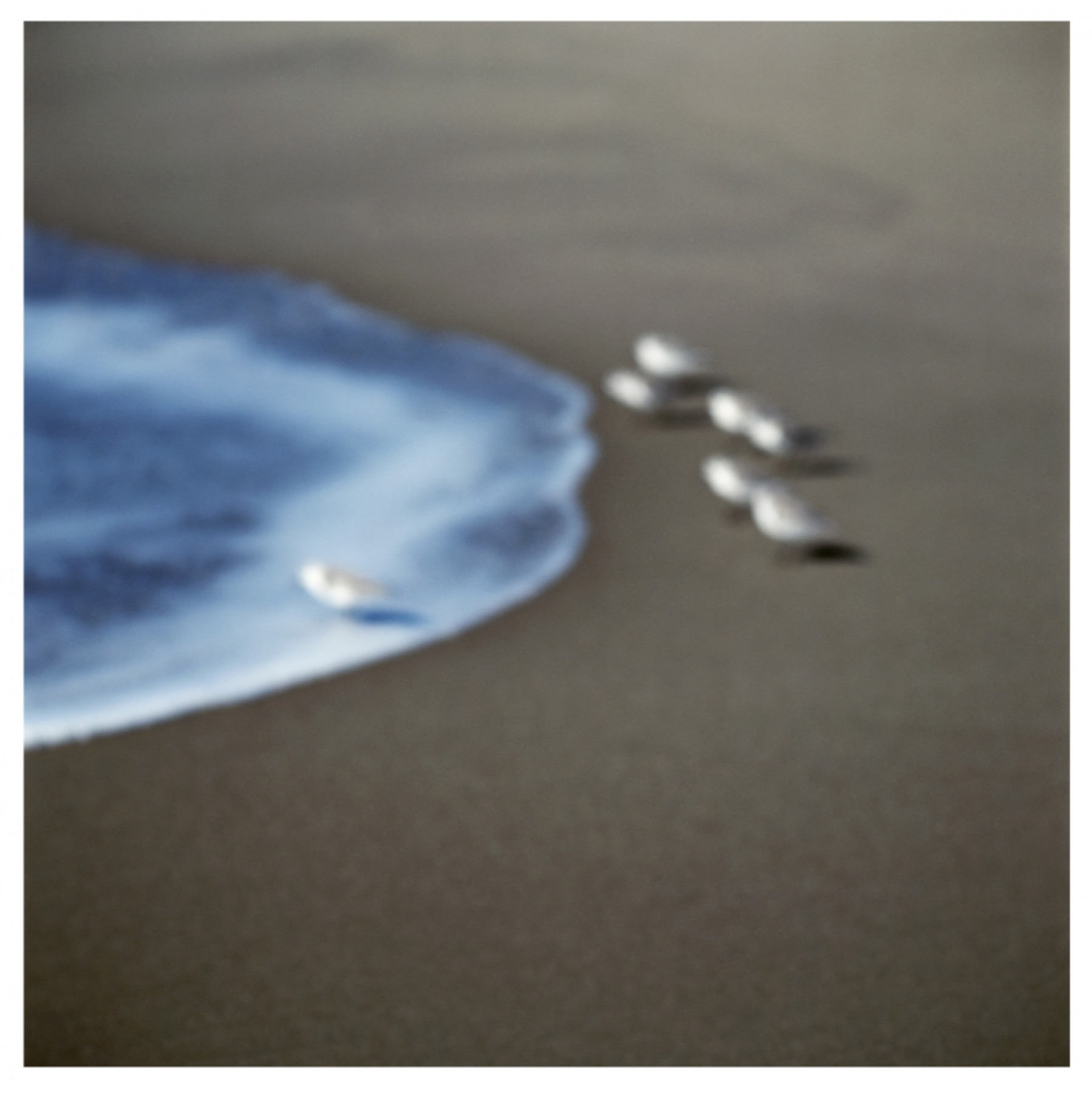 On a sunless morning in early September, twenty-some miles north of Charleston proper, I left my wife in bed, dressed my son in swimming trunks, and walked out the back of a rented condo for the Atlantic shore. Beckett had recently begun speaking in discernible English. At the sight of the seascape, he jolted up straight in his perch atop my shoulders and, in a fit of recognition, drummed his bare feet against my bare chest. Boat, he said. He leveled his left middle finger at a trawler on the horizon. Beach, he said, a little quieter. Sand.

I paused at the end of the boardwalk. A pair of terns down-drifted like kites in the breeze. The rap of Beckett’s legs had slowed to a tapping. And what else, I asked, brushing at his toes. What else do you see? Ocean, he said, trailing off, as if he had found the word (no doubt learned from picture books in our D.C. apartment) an insufficient measure of the real thing. Or perhaps he was bored. Or going in his diaper. The boy’s reticence could make for a difficult read.

Once I hauled him to a Joan Miró exhibition in the National Gallery. I thought he might get a rise out of Miró’s paintings of Catalan farmers. One of Beckett’s first words, after all, had been tractor. His favorite toy was a plastic barn. At the museum, I sidled up close to a canvas called The Farm, turning sideways so as to give Beckett a clear view of the lizards between the bean hills. He was statue-still. He took it all in with intense regard. Or so I thought. His weight shifted, a slumping there at the center, and when I glanced down at him in the carrier, the drool was already pooling in the tucks of his neck.

Unlike the Miró, the beach roused him. He heeled at my chest and pitched face-forward. I no sooner flipped him from my back and stood him in the sand than he ducked my handhold and took off. Beckett had started walking around the time he started talking. He still staggered, still fell, still gave hell to his palms and knees, but a little less so every day and every day with quicker rebound.

He was nearly to the water before I caught him. When I offered my hand this time, he took it. I shot a look over my shoulder at the hotel balconies. For a moment, the thought of someone spotting us flooded me with anxiety. The clasp was one of those moves that outed me as a father, a title I still felt unfit to claim. Father was what my father was, what my grandfather was. Most days I felt like a middle-schooler headed to a dance in an old blazer, strutting but failing to look the part.

Daddy, Beckett said. He yanked at my arm and, when he had my attention, cocked his free middle finger at the fishing boat from before. (Where did he pick up this gesture?) It was in motion now, headed south toward Charleston, nicking a white ramifying gash in the outer blue. The beach was empty. A quarter of seven and not another shadow on that stretch of ash-gray sand. I wondered if Beckett would go any farther. His introduction to the sea—six, maybe seven, months earlier—had ended in a mouthful of seaweed and a fit for the ages. My wife, half-joking, half-serious, worried that the incident had scarred him forever. He would never be able to fish or swim or make transatlantic flights. He would never be able to stomach Treasure Island or Moby-Dick.

But if Beckett had put to memory the earlier fiasco, he gave few signs. He flashed a sideways grin and marched with me into the shallows, dropped my hand and went splashing into the ripples and foam. He was still moving, yipping and kicking up spray, when a low, late-breaking whitecap sat him in the water. Before the next wave could crash, I scooped him into my arms. He was breathless, tense. I had a mind to call it a morning, but when I asked him if he wanted to keep going, he nodded his head yes.

We waded into waist-high water. Beckett took hold of my neck. I bent my knees and dipped until our upper bodies were enveloped. It had been several minutes since I had faced the shore. I was under the illusion that we had been moving in more or less a straight line, but we had drifted a good ways from the boardwalk, rerouted, almost imperceptibly, by the tide. I pointed out the condo, the car, the pool, over which a crescent moon and palmetto tree slunk and whipped against a tall metal pole.

Just then I noticed two women walking on the beach. They were lugging buckets, the shell-collecting kind, but they had ceased their foraging and were waving in our direction. I had never seen them before. Perhaps, I thought, they were simply being convivial, responding in kind to the sight of a father playing with his son. In their presence, my insecurity shape-shifted into something like pride. I gave a harried wave then spun around and lunged several long steps forward. The slime gave beneath my toes and I felt a cold undercurrent on my calves.

Still, Beckett held on, even while the water lapped at our armpits. He was relying on me utterly. He had surrendered something of himself out there where his feet no longer touched bottom. Overcome by the trust in his hold, I dropped my hands to his middle and tossed him into the air. He shot from the water with splashes and gulps. At the top, a fraught look, the likes of which I had seen when he encountered big dogs, swelled in his eyes. But when I caught him and the spray cleared, he slapped at the water and shouted. Again.

Again, I had learned, was Beckett-speak for bliss. Again was hard to inspire but easy enough to answer. In quick succession, I threw him into the sky one time after another, catching him at the waist just as his feet creased the water, sinking him chin deep before launching him yet again.

The water rained around us, sloshing and jetting, while the wind blinded and deafened me to our surroundings such that the cool wet ruckus, when it finally waned, was a kind of coming to, a returning to the senses, but not to stillness and not to quiet, for there were howls coming from the beach.

The pair from before was standing directly in front of us. They had dropped their buckets and taken to waving their hands in big wide circles. I glanced over my shoulder to see if I had missed something, to see if they were flagging down a jet ski or a snorkeler out beyond us. By the time I glanced back, they were jumping up and down. Hands cupped around her mouth, one of the women shouted urgent words I could not quite catch for Beckett’s ardent cries of again, again.

I peered to my left and right but did not notice anything out of the ordinary, only waves under clouds and a kite-tail of gulls drifting between. The fishing boat was but a glint now in the southern distance. Confounded and increasingly paranoid, I lifted Beckett to my shoulders and high-stepped through the waves and breakers, shifting the boy to my hip once I hit the swash.

The strangers ushered us onto the shore as if we had survived a shipwreck. One produced a towel and draped it around Beckett’s shoulders. The other rubbed our backs and shook her head, asking if we were all right, repeating Oh God, Oh thank God.

The sprint to shore had sucked the breath out of me. What was it? I asked through gasps. What was it in the water? A fin, they said. They had seen a fin where we had been wading. Beckett slumped on my hip, dangling his arm like he wanted down. We thought we’d never get your attention, the women continued. We thought we were going to have to come in after you. The frightening word remained unsaid: shark.

I stood Beckett in the sand beside me. I looked again but still saw nothing but sea. Was it out there? And if so, had we been in danger? The fin might very well have belonged to a dolphin. Even so, I couldn’t shake the notion that I’d offended a tacit code of fatherhood. The first rule, the only rule: never put your child in harm’s way.

But when I bent down to check on Beckett and attempt to express my remorse, he was oblivious. He held up a frittered piece of driftwood. Stick, he said, and lifted it over his head like a torch. And for a flash that still flickers it seemed that for all my failures, real or imagined, I had managed to shield him from something big while we were roughhousing in the water—from jaws perhaps, but also from my doubts, fears. What could come between us now? We had survived the morning waves.

Drew Bratcher, an MFA candidate at the University of Iowa, is at work on a book about Nashville’s changing music scene.