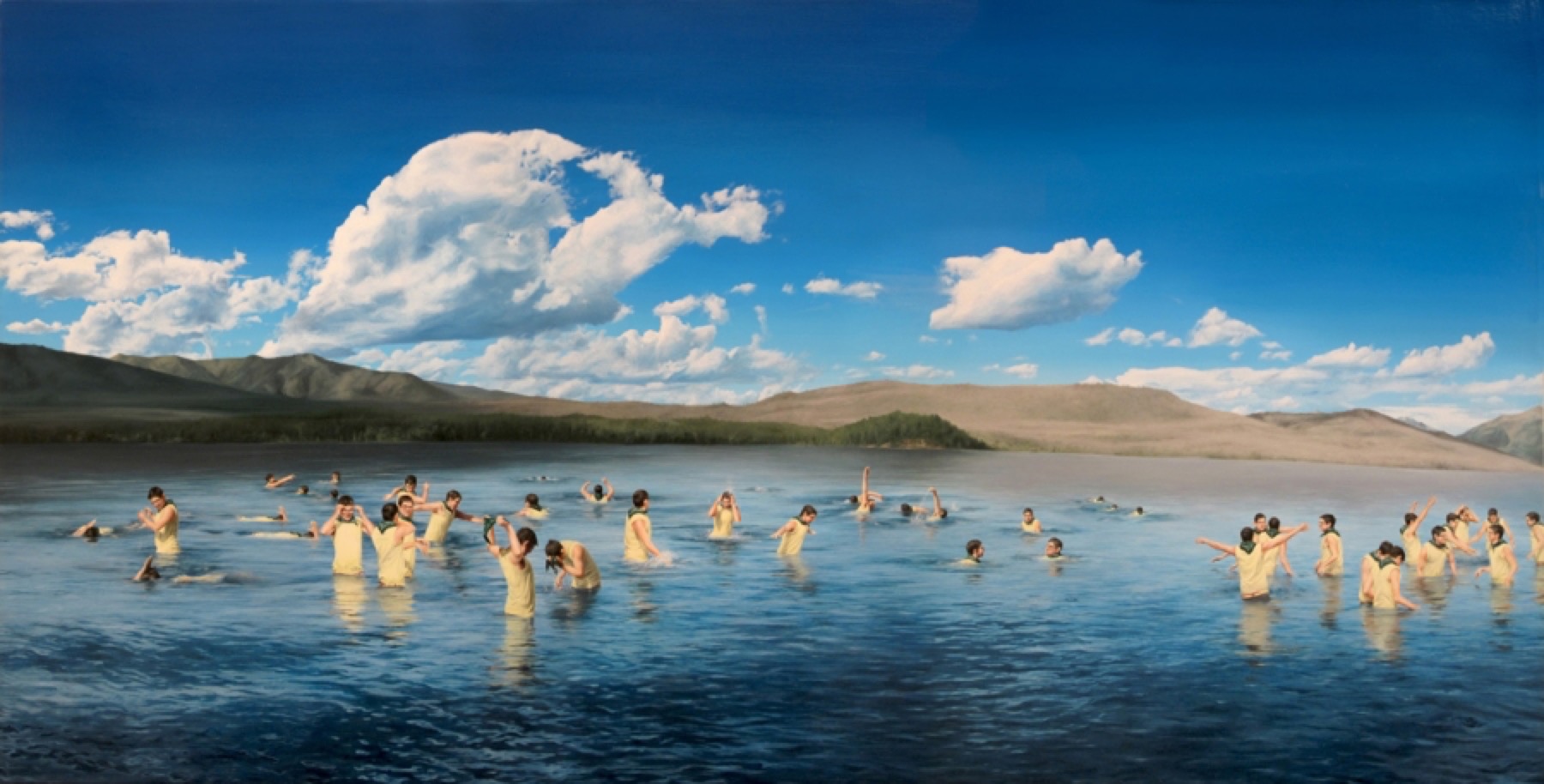 "Untitled (Lake McDonald)," by Cobi Moules. Courtesy of the artist

The day Stick arrived in camp, we named him after a piece of dead vegetation while hoping that a more contemptible name would come along—but one never did. Still, we were dumbstruck when he drew from his footlocker an enormous trove of baseball cards, chewing gum, Hershey’s bars, comic books, and model airplanes—the Smithsonian of camp provender, news of which raced through all sixteen cabins, from the seven-year-olds to the teens. The resulting camp-wide moans of envy and longing only served to increase the smug satisfaction within our cabin of twelve-year-olds, the Eagles (each cabin was named for a species of wildlife), since Stick and his treasure chest were ours, to be protected at all costs from raiders and vandals. And, yes, Stick needed protection, being undersized and timorous, afraid of being hit in baseball, afraid of the soft pitches lobbed to him in practice, afraid of a basketball bounced to him from off court. And thus we constantly watched over him: on his treks to the bathhouse, or during free period when he tried to play Ping-Pong or missed a ball in tennis or dog-paddled in the swimming pool.

We protected him until the day he instituted a rationing system for his stockpile and began keeping records in a spiral notebook of loaned checkerboards, toy cars, and airplanes, capping our limit at five, instituting his new regime among his own cabin-mates, even hinting that he might require cash payment for food items, replenished weekly by packages from home. O Stick! At age twelve, already an office tyrant, humorless, punitive, scowling over a retail empire; that is, until Preston, the cabin’s third baseman, leading hitter, and full-time bully, had his credit application rejected, and then, well, Preston exploded, leaped onto Stick’s bunk, grabbed the sacred objects and scattered them into the air, whereupon the rest of us joined the riot, stealing fistfuls of inventory and slinking back to our bunks, looters and cowards all.

There was a price to pay, however. Even after our winning season in baseball, after dominating the league: with Preston homering in eight straight games and Baggy, Sandy, Turtle, Winston, everyone, myself included, slashing line drives and doubles, beating out infield singles, to set a camp record for hits and wins. (Stick, who spent the rest of the season moribund and mute, couldn’t harm the team batting average, and once, during a string of twenty-three strikeouts, received two walks.)

I knew that Stick was in hell. I had been Preston’s victim the previous summer. I knew Preston’s methods, the steady progression of his terrorism, the sneak attacks when you were returning from the canteen, the Indian wrestling that ended in chokeholds, bruises, and tears. His sudden appearances from nowhere just when you thought you were safe.

Worst of all was his charisma. Preston’s flashing smile had magnetized us! He was the team hero, for God’s sake. Not just baseball but basketball, swimming, archery. His batting average was .556! The only course open to Stick was a session of therapeutic counseling with Mrs. Carrington, the owner’s wife, the sole woman at camp (other than the cooks and the nurse), who hovered over us as a grandmotherly symbol of tenderness and home. Mostly seven- and eight-year-olds visited her in the owner’s residence beyond the cafeteria down a wooden walkway. Night weepers, bed wetters, and runaways found comfort in her lap along with a cup of hot chocolate.

The rest of us considered it babyish and unsporting to seek out Mrs. Carrington. If you had a problem, you were supposed to tough it out on your own. One evening after Song Hour, after “Michael Row the Boat Ashore” and “Kumbaya,” I noticed Stick pacing alone on the walkway leading to the residence. I knew what he was doing: trying to work up the courage to knock on Mrs. Carrington’s door and have a good cry. I had paced those same boards the summer before.

I watched him for several minutes, but the evening movie was about to begin, a Randolph Scott Western that I didn’t want to miss. In truth, I didn’t like Stick. He was a hoarder of goods and a liability on the ball field. I don’t know if he went in to see Mrs. Carrington that night and had his cup of hot chocolate, but I do know that his days of misery at the hands of Preston continued right up to the last day of camp, and the awarding of the league trophy to the Eagles.

When I got home at the end of the summer and unpacked my footlocker, I found one of Stick’s model airplanes among my own gear. The plane was an unassembled P-38, still in the box. On the back was a bookplate stamped in tiny print with Stick’s real name: F. A. Malone, 4227 State St., Brainard, Florida.

Later that week my mother gave me a large brown envelope that she’d bought at the stationery store. I printed Stick’s name and address and then my own name and address on the envelope in the correct places, then inserted  the airplane and licked the flap, adding several strips of Scotch tape for good measure. Somehow, I lost the package before I ever made it to the post office—left it in someone’s backyard or threw it in the trash by mistake.

For a moment I wondered if perhaps Stick was the problem, if he was simply the kind of person who would go on being tyrannized and exploited for the rest of his life. Then I told myself that anyone could lose an envelope and, besides, Stick doubtless owned more toys than he knew what to do with. If pressed on the subject, I would have had to admit that the item was Stick’s legal property, and that I had failed him by not returning it. In the end, I knew by that point in the summer, one more betrayal of him, give or take, wouldn’t make any difference.

William Caverlee is a contributing editor of the Oxford American. He is the author of Amid the Swirling Ghosts and Other Essays.