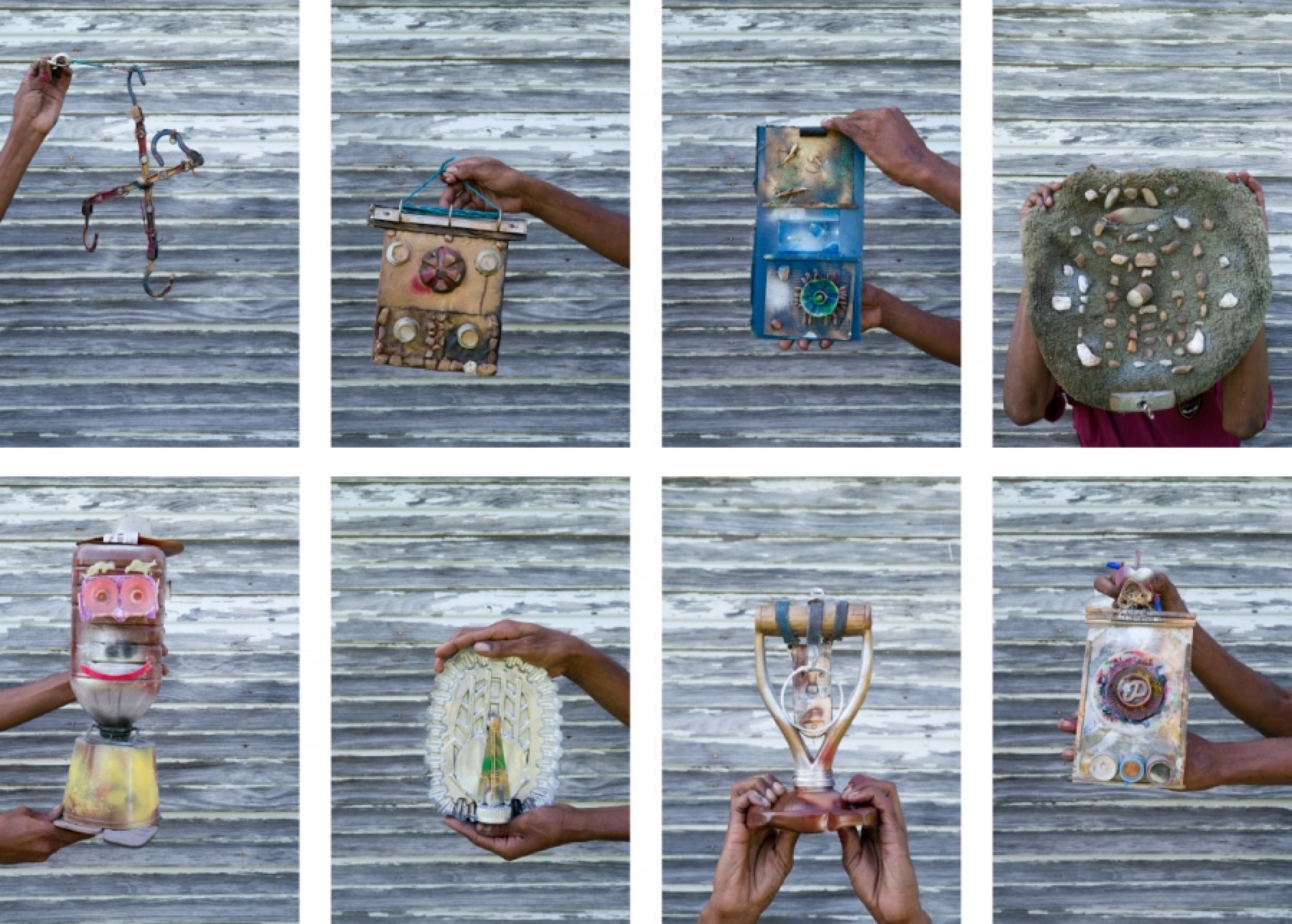 Go east about fourteen miles on Highway 31 from the little town of Corsicana, Texas, to the littler town of Kerens (pronounced “Kerns”), turn right at the Shell station onto two-lane blacktop Highway 309, then about a half mile over the tracks to the four-way stop and left on Farm Road 3096 past old frame houses, cyclone-fenced backyards that give abruptly onto open fields divided here and there by strands of old woods that remain along the creeks, proceed five miles or so to Southeast County Road 4090, hardly more than a gravel path and easy to miss, turn right and stop right there, one tenth of a mile from Wayne Hall’s house, to note the sign on your left, on the metal post, that details (so strangely in these regions where our sense of order fades) in perfect military-looking white-on-black, in vertical sequence, names of residents and distances to each in decimal fractions of a mile. There are nine, in irregular increments, from 0.1 to 1.0. A self-sufficient series. Nothing further to be known beyond this narrow range—a vanishing blip of frequencies emerging from the static. Yet encouraging out here in the middle of nowhere that such rigorous calculation should be possible or useful. Signal filtered from the silence.

Go 0.1 mile down the caliche road to the small, deteriorating white frame structure on the right, across the culvert, onto the grass and turn the engine off. It’s drizzling. Wayne’s two dogs are on the porch. Big dogs. One friendly and one not. My two companions (both quite friendly—Andrew Neumann, an artist from Boston, and Ofeigur Sigurdsson, a writer from Iceland, both installed for a while at the semi-monastic 100W artists’ residency in Corsicana) take their cameras out. They’ve come to see this man whose art they’ve glimpsed me struggling with across the street from 100W in the studio I share with my wife, Nancy. We’ve been working with Kyle Hobratschk, artist and residency founder, on ideas for an exhibition of Wayne’s art. It’s tricky, though. How best to show it—clarify it, isolate (like ancient artifacts, rare insects) these constructed intuitions into truth and beauty resident in junk.

I never know which of the two doors I should knock on. And I’m almost always wrong. “Hey, Patch.” The friendly one comes over for a pat. “Hey, Booker.” Booker stands away, considers leaving, but he doesn’t like the drizzle. Wayne’s new workshop, built for him out here on the porch by members of a Corsicana church, is smaller than I expected. Six by eight or so. Of particle board and tucked up under the eaves. I can see his workbench in there faintly lit by a string of tiny white Christmas lights that dimly reveal the clutter of discarded stuff accreting into Wayne’s unlikely objects. Wayne appears at the other door. It’s hard to make him out at first. So dark in there on such a drizzly day. I move very carefully from the living room through an even darker room into the bedroom, where his pieces tend to accumulate on every surface—dresser, TV, bed. It’s hard to get a decent photo in these shadowy conditions, out of which his pieces seem to be produced like toys emerging from the gloom on Christmas morning—though refusing to resolve into such simple gratifications. These are imponderable constructions. Built of residue, the stuff that’s overlooked, that gets tossed out—reclaimed, assembled into meta-stuff, the higher sense of stuff, of stuff revered, transfigured, sprayed with gold and silver. At the edge of dissolution, loss of signal, something marvelous appears. Wayne is a deacon of the Samaria Baptist Church. There is about all this a sense of resurrection. Plastic frozen-food containers, toilet paper rolls, sticks, pebbles, bits of tin, medical equipment—Wayne’s not well; he’s pretty shaky on his feet, though he gets by with friends to help at home and drive him to the doctor—broken bottles, unidentifiable automotive parts and animal parts, and little googly doll eyes here and there, and always macaroni, little tubes of macaroni everywhere, and all glued up into these unresolvable wonders sprayed with gold and silver, sometimes other bright metallic colors, like that glorifying foil applied to images of saints. These assemblages don’t need to be explicitly religious to suggest the spiritual potency of ordinary things. That simple things—especially things detached from ordinary meaning—may acquire a higher meaning. That these objects make no obvious representational sense makes sense. Who knows what spiritual beings look like, after all? Platonic forms?

Nancy regards Wayne as a sort of spiritual being. She’s an artist and I generally trust her instincts. There’s a goodness, a directness and a purity, she says. He looks the part—though it’s his illness, not the emaciating rigors of the desert, that has mortified the flesh and pared him down to bare essentials for existing in the world. He sort of floats within his clothing, seems at times about to vanish. And yet once, a couple of months ago, he showed up at our studio in his deacon’s outfit. Goodness. He was splendid. He was perfect. As if sprayed with gold himself. Our place is dark except where spotlit. It was startling as he walked into the light. He was immaculate—white trousers and white jacket buttoned high without lapels (that priestly Nehru-jacket look) with gold-edged buttons. I was astonished into foolishness—I knelt and kissed his hand. I see him now as Nancy sees him all the time, I think—just like the things he makes, detached from ordinary meaning.

Andrew and Ofeigur have Wayne pose with one of his pieces. It’s a large one and, I think, an especially good one I’ve not seen. Imagine an altarpiece by Joseph Cornell but looser, wilder, closer to the basic facts, the trash from which it is almost miraculously assembled. Wayne is wonderfully obliging, though not feeling well at all; he has an appointment with his doctor for this Friday. I jump in to get a shot, a print of which I have before me on my desk: He holds an open two-by-two-foot cardboard box, whose panels at the sides are freely sprayed with cloudy sweeps of red and silver over purple, suggesting heavenly atmospherics—Nancy ventures late Baroque. It is a triptych. There are figures in the center, in the box—what I can’t help but read as figures, so theatrical the space (his kind and thoughtful face above it like the puppeteer emerging from behind), a silver-painted liquor bottle in the middle, flanked by two more-problematic structures built of red-and-yellow-painted plastic cups and other odds and ends. And hanging down and angling back across the top half of the open box, a sort of painted curtain like an operatic backdrop—silver clouds sprayed over blue with a central, vertical plume of gray like smoke escaping from the bottle into the heavens, whence, as if in response, a heavenly string of silver-painted bottle caps descends across the center of the stage. If you ask him what it’s all about, he’ll simply tell you how it’s made. The parts. The glue, which he makes himself. I’d like to think he keeps a secret. But he may just be that pure.

About two years ago we spotted him—or Nancy did; she has the best antennae for such things—on Beaton Street with the other “Derrick Days” exhibitors and vendors come to town for Corsicana’s annual festival commemorating, as I understand it, oil booms past and maybe, who knows, in the ritual of it, drawing more good fortune up the pipe. But there among the beauty products, jams and jellies, hand-carved walking sticks, and such: a slender, quiet man with uninterpretable objects on his table. What in the world is all this stuff? (I’ve found, in working toward a show, that it helps to place, whenever possible, each piece in a sort of clinical isolation—a simple shadow-box-type frame with white interior works pretty well to separate it from that jumble of the world it seeks to explain, exalt. The white to suggest the state of the mind attending its creation, I suppose.) We bought some pieces and began a conversation.

You see a lot of art that’s made from junk of course. And it’s almost always pretty tricky, cute, ironic. “Look, it’s junk! Can you believe it?” Sure you can. It’s easy. Anyone can do it. But not everyone can mean it. It’s a matter of conviction. Of necessity and focus. When there’s nothing really to work with but the residue of daily life, that residue acquires, upon profound consideration, life again. So, what in the world is all this stuff? A re-creation of the world in purer terms than we are used to, I believe.

The macaroni is important. It turns out it represents a sort of echo of Wayne’s big creative bang in the kitchen about eight years ago. It’s how this whole thing started. He’s always been creative—written poetry since childhood, even produced a book of poems, Another World, that you can get from one of those print-on-order publishing houses. But eight years ago he spilled a box of macaroni on the floor—it’s one of those moments; think of Archimedes in the bath or Giorgio de Chirico’s revelation in a Florentine piazza—all the little curls of macaroni scattered across the kitchen floor like untranslatable text. Like preatomic bits and pieces that will come together, somehow, as the universe cools off, to make some kind of higher sense. To get things going. Just like that, a signal manifests, emerges in the scatter, in the bleakest circumstances. “I just figured I could make it into something,” he remembers.

I’ve been trotting to and from the car with pieces to take back—one at a time, shielding each from the weather. They’re so fragile. This whole moment, this whole situation out here seems so fragile. Such a fragile glimpse into the way our fragile understanding seems to work—how terms will suddenly coalesce from almost nothing into something. Jump from lower state to higher. Bang. Like that.

Old Booker wishes we would leave. Not hang around out here on the porch as drizzle starts to turn to rain. As we peek into Wayne’s new workshop. Take some pictures. Poor old Booker would prefer us back in Corsicana, Boston, Iceland. He prefers the lower state, things properly dispersed. Reduced to faint potentialities, pursuable like rabbits now and then but for the most part left implicit in the emptiness, the silence here extending out as far as he can know—beyond those distant places, even, to the edge of the uncreated world. At what point does it start to come together? Out of nothing. Wayne insists he doesn’t think of it as art. But more as a puzzle. Which suggests some sort of preexisting form. Some deep instruction, inclination in the emptiness—as readily discerned, you’d think, out here in the nothing-much one tenth of a mile down a gravel road, as in the desert. Just like that, there are instructions. Just like that, the whole residual world transforms.

David Searcy lives in Dallas and Corsicana, Texas. He is the author of the book of essays Shame and Wonder, and his work has appeared in the Paris Review, Esquire, the New York Times Magazine, Freeman’s, Harper’s, and elsewhere. His long essay The Tiny Bee that Hovers at the Center of the World will be out next year with Random House.