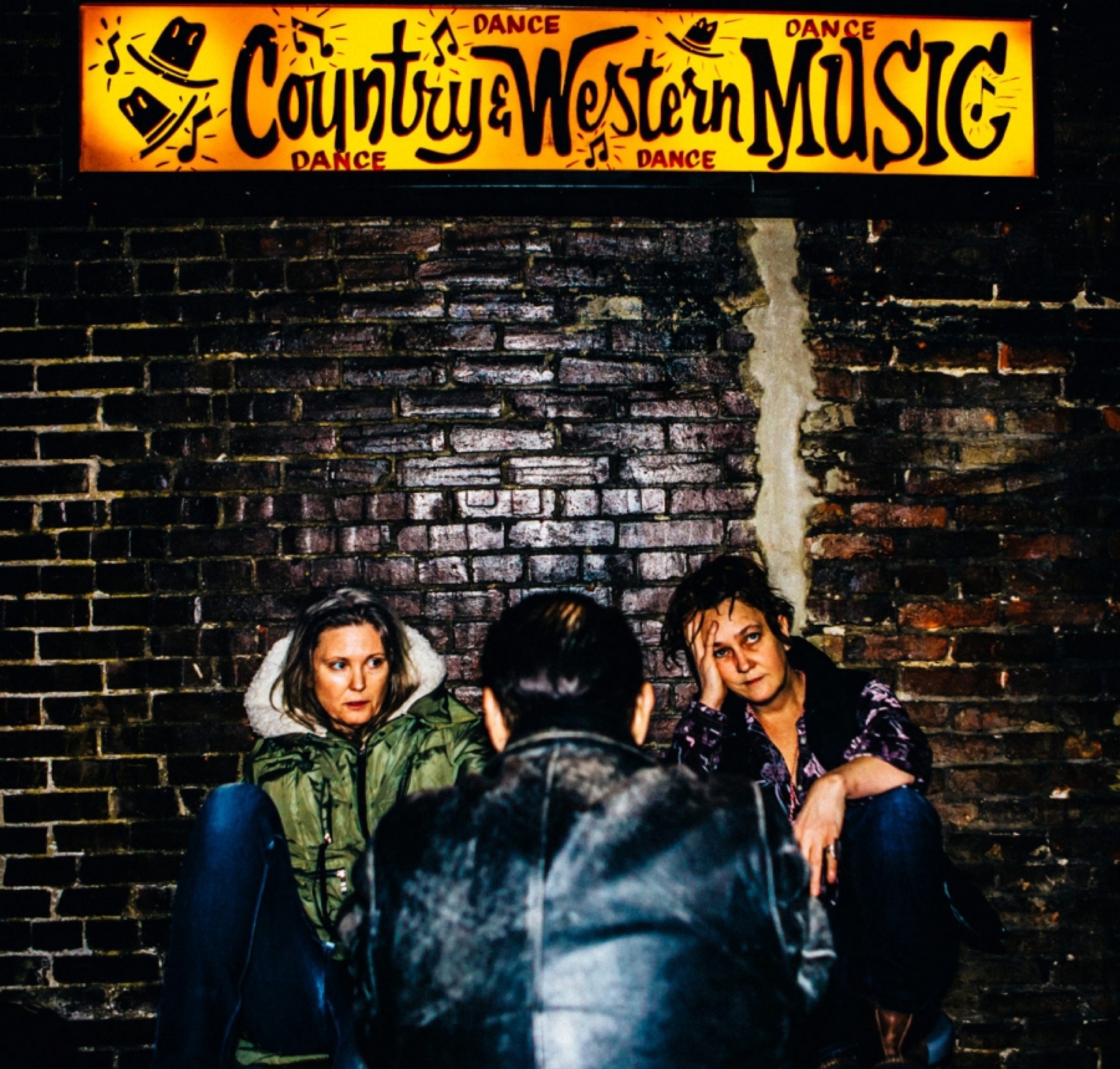 Photo of Freakwater by Chris Sikich

There’s a cemetery in Eastern Kentucky that sits on a small knoll surrounded by a massive strip mine. You can only reach it by way of dangerous haul roads where overloaded coal trucks thunder past. Some of the headstones date back to the Spanish-American War, and many of them are homemade, molded from cement. An unsettling number mark the graves of children. One reads:

Linvill’s grave, overlooking a black sludge pond where mining waste is stored, seems like a pretty good place to begin thinking about the music of Freakwater. Because if the music of this extraordinary Louisville outfit is about anything, it’s about dead babies, dead religion, and the abiding nature of loneliness.

I first heard Freakwater in the mid-nineties, when I was living away from Kentucky for the first time—feeling lonely and adrift. I bought their third effort, called—what else?—Feels Like the Third Time, and when Catherine Irwin and Janet Beveridge Bean sang, “I should have moved to New York City but I never was that cool / I just languished in the Midwest like some old romantic fool,” I felt the sentiment so deep in my bones, Freakwater quickly became the soundtrack of my personal diaspora. I would leave my terrible teaching job in Farmville, Virginia, then drive the backroads for hours drinking Miller High Life from cans and listening to Bean and Irwin’s inadvertently consoling songs.

Back then, I had no idea these two women were both from my hometown of “Loserville” as one of their songs has it. Since we’re all about the same age, we probably did some underage drinking in the same bars that would soon produce bands like Squirrel Bait, Antietam, and King Kong. But Freakwater (slang for moonshine) didn’t sound like those raucous post-punk bands. Bean and Irwin, along with bassist David Wayne Gay and a rotating roster of great side players, were at their core an old-time string band. But one with a savage sense of irony. They’re like the Carter Family on quaaludes, or Hazel & Alice with mountainous chips on their shoulders. Freakwater’s music is a first cousin to the visceral churn of that protean Louisvillian, Will Oldham. And it is as dark as the deepest mine Merle Travis ever sang about.

Indeed, “What the People Want,” the first song on their latest release, Scheherazade, captures in its first five lines the horror of a woman murdered, then gang-raped, before her body is thrown down a well. The ominous violin-driven refrain—“Whose baby are you?”—first tries to identify the corpse before turning to the killers, “every one some mother’s son,” to ask the same question, this time with stunned incredulity.

Scheherazade, of course, was the Persian virgin who prevented King Shahryar from decapitating her by beguiling him with a new story every night. You can see the resemblance to Irwin and Bean (who split songwriting duties) fighting off all manner of American violence, dissolution, and mendacity with mordant songs grounded in the broadside balladry of the nineteenth century. Their wily narrators often have to fight off contemporary King Shahryars, as in “Scamp,” in which Irwin and Bean sing, “My baby is a swinger and he’s hard to dodge / kicking up gravel by the motor lodge.” What’s more, like the great female singer-songwriters of Appalachia—women like Hazel Dickens, Sarah Ogan Gunning, Florence Reece, and Phyllis Boyens—Irwin and Bean are often singing of a particularly female understanding of loss. In Voices from the Mountains, Gunning tells of going to comfort mothers whose children starved to death in coal camps because the companies wouldn’t pay a living wage. Freakwater’s ethos comes straight from that understanding of pain, both inflicted and endured.

But Irwin and Bean’s songwriting is distinctly contemporary even if their sound is not. They have updated traditional mountain music so that, for instance, Florence Reece’s famous protest song “Which Side Are You On?” turns out to have “more angles than the Pentagon” in “One Big Union.” Scheherazade’s “Take Me with You” is about having to leave Eastern Kentucky because mountaintop-removal mining—the kind that now surrounds Linvill McIntosh’s grave—has made it too toxic to stay. Appalachia’s traditional reliance on faith to help make sense of things like mine disasters is nowhere on display. Freakwater mocks the “prophets who profit only from your fear” on “Are You Ready,” then adds, “If Jesus calls you home with that angel trumpet sounds / Won’t you just leave me alone if I’m six feet underground.” On “Gone to Stay,” Irwin and Bean essay, “There’s nothing so pure as the kindness of an atheist / a simple act of unselfishness that never has to be repaid.” And that’s about as sanguine a sentiment as you will find from Irwin and Bean. Then again, the next line in the song is about slitting one’s wrists.

Bean and Irwin began singing together in Louisville basements. Irwin has remained in the city in the company of more traditional musicians like Daniel Martin Moore and Joan Shelley, but Bean moved to Chicago to form the Sonic Youth–like, decidedly Freakwater-unlike band Eleventh Dream Day with her husband, Rick Rizzo. Bean and Irwin both keep constant side projects going; that and the geographical distance might explain Freakwater’s modest output of late. But while Scheherazade features the band’s most densely textured sound (think of that other Louisville group, My Morning Jacket), the writing is instantly recognizable.

A Freakwater song works something like this. Irwin starts singing over a bass and guitar. Bean comes in after a few bars, accompanied by violin or pedal steel. They trade lines back and forth, then converge into stacked harmonies in which Irwin’s low earthy timbre finds a counterpoint in Bean’s airy alto. It’s those two perfectly paired voices that keep you from drowning in what the songs are actually about. And Irwin and Bean are two of the most literate songwriters on the scene. “I try to remember things I told you I would never forget,” they plaintively sing, almost moan, on the great “Forgettable Song,” one of their many laments of love gone wrong. Then:

This little scar will always remind me of you
A souvenir that always remains just like a tattoo.
And a green band still lingers around my finger where that ring used to be,
And I wonder if you have a scar to remind you of me.

Bean and Irwin also have a minor genius for flipping the script on songs written by men, from Nick Lowe’s “You Make Me” to Loudon Wainwright III’s “Out of This World” to their utterly successful cover of Conway Twitty’s slightly pedophilic “You’ve Never Been This Far Before.” To hear Irwin sing the seduction of this tyro—“I don’t know what I’m saying as my trembling fingers touch forbidden places / I only know I’ve waited for so long for the chance that we are taking”—feels almost like a feminist appropriation of Twitty’s leering sentiment. And it’s funny.

But given that the music business is about the farthest thing from a meritocracy, this thirty-year-old band still hones its craft in relative obscurity. One also senses a certain recalcitrance on the part of Irwin and Bean. Freakwater’s website cops to “pitfalls and conscious choices that have kept them from becoming very well-known.” After a deal with Steve Earle’s record label E-Squared fell apart some years back, Earle took to announcing from the stage that “the women of Freakwater can kiss my ass.”

Whatever Earle was reacting to, there does tend to loom a distinct combativeness—part Calypso and part Circe—in Irwin and Bean’s songwriting. “The dirt beneath my nails is not from some field of flowers,” Irwin cautions on the transcendent “Good for Nothing.” “Give her a kiss, she’s gonna suck the gold right out of your mouth,” Bean warns on “Dog Gone Wrong,” while the title character in “Queen Bee” imagines herself “up in a hollow tree, perfect idolatry, little bees on their knees.”

Let me say it this way: if a Freakwater song was sitting in a hotel bar, she would be down at the end, alone, surly and sullen, putting away double greyhounds in quick succession. You can buy her a drink, but approach at your own peril. She’s writing a song on the back of a paper cocktail list, a song about two lonely people in a hotel bar. It won’t end well.

“My Old Drunk Friend” by Freakwater is included on the Kentucky Music Issue CD.

Erik Reece is the author of five books of nonfiction, including Lost Mountain and Utopia Drive, and is the founder of Kentucky Writers and Artists for Reforestation. He teaches writing at the University of Kentucky.