How The Sauce Is Made 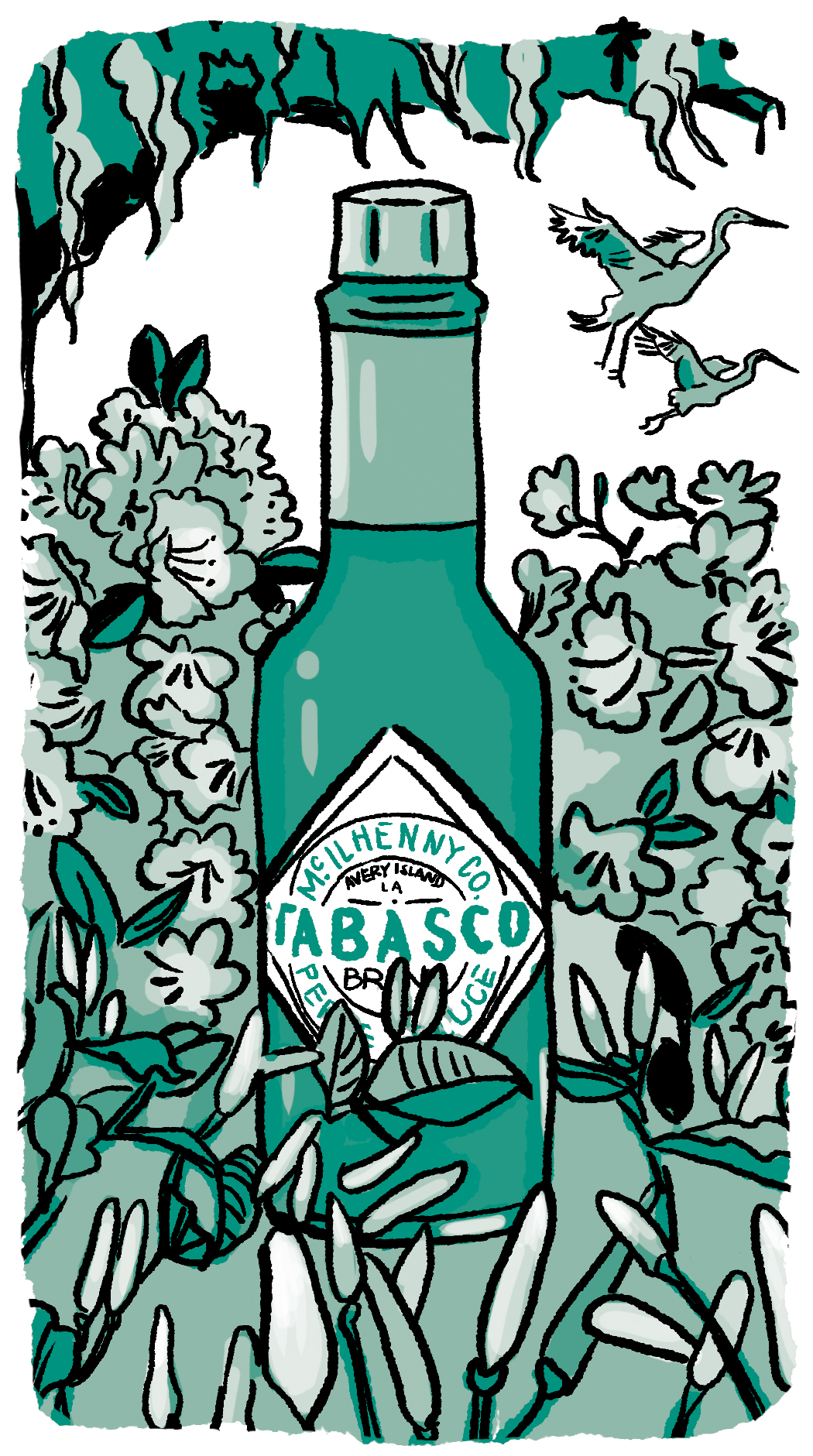 Six miles south of New Iberia, Louisiana, sits Avery Island, best known as the home of Tabasco Pepper Sauce. Like the pepper in the famous sauce’s name, the designation “island” is somewhat of a misnomer. Surrounded by bayous, salt marshes and swamps, Avery Island is actually 2,200 acres of lush semitropical marshland set atop an 8-mile-deep natural salt dome. It was here that, in 1868, Edmund McIlhenny, a former New Orleans banker left destitute by the Civil War, began manufacturing Tabasco, making it one of the oldest sauce brands in the country. Initially sold locally in cologne bottles, Tabasco has since grown to become a global commodity, currently available in 192 countries and so ubiquitous that, for many people, the brand’s name is synonymous with hot sauce itself.

I first became aware of Avery Island while doing research for a novel. Set in 1914, the story centers around the experiences of a man who invents a meat sauce that, like Tabasco, becomes an extremely popular national brand. One of the things I wanted to explore when I wrote the book was how the increased circulation and distribution of commodities in the early 20th century affected ideas about identity, community and local culture. Tabasco, which is often associated with Louisiana identity and which was emerging as a global brand during the same period in which my novel is set, became a focal point of a broader inquiry into the intersecting symbolism of food as both a commodity and a source of sustenance.

Incredibly, the Tabasco company is still family-owned and continues to operate out of Avery Island, and so a visit offered the opportunity to witness firsthand how the sauce is made. The on-site museum documents the story of how McIlhenny, after years of experimentation, determined that aging his sauce greatly improved its specific taste. His method of production involved grinding the chiles into a mash, mixing it with the island’s natural rock salt and aging it in jars for 30 days. Vinegar was then added, and the sauce was pickled for another month.

A tour of the factory demonstrated how this original process continues to inform production today. The period of fermentation has been extended from its initial two months to an average of three years, and in order to keep up with demand, the chiles are now farmed in various locations in Latin America. But all of the seeds still originate from Avery Island, and once the chiles are cultivated overseas, they are sent back to be mixed with salt (mined from underneath the dome) and aged in large oak barrels. The company has been able to continue to operate out of its original location, all while manufacturing up to 750,000 bottles of sauce per day.

Preservation–in terms of Tabasco’s production methods, the use of traditional, local ingredients and the brand’s association with a particular place–was a theme that resonated in other aspects of the island as well, becoming a concrete expression of the McIlhenny family’s influence there. Just across the road from the Tabasco facility is Jungle Gardens, a 170-acre botanical garden and wildlife sanctuary that stretches along the Bayou Petite Anse and was established by Ned McIlhenny, son of Tabasco’s founder. Within Jungle Gardens is Bird City, one of the oldest bird sanctuaries in the United States, often credited with having saved the snowy white egret from extinction in the 1920s, when the population was threatened because of the overuse of their feathers in the making of ladies’ hats. Today, thousands of egrets can be seen on the island as well as numerous other species of animals, including white-tailed deer, otters, muskrats, alligators and Louisiana black bear.

All of this emphasis on preservation seemed fitting of a place that was literally made of salt. It occurred to me that the only two other ingredients of Tabasco–chile and vinegar–are, of course, preservatives themselves. In a slight deviation from the focus of my novel, I began to consider how the cultural histories of all of these ingredients, and in particular the chiles, told a much broader story, through the central role they have long played in the circulation of food products themselves.

Capsaicin, the unique chemical substance that makes chiles “hot,” is like salt and vinegar, a powerful antimicrobial. Chile sauce not only makes food taste better, but also helps keep good food from going bad–a fact that has contributed greatly to hot sauce’s appeal, in various incarnations, throughout the world.

All of these incarnations are traceable to the Americas. One of the world’s earliest cultivated crops, the chile is indigenous to the Americas and, like the tomato, potato and corn, made its way into the cuisines of Europe, Asia and Africa through various trade routes at the service of slavery, colonialism and global commerce. Given the chile’s current associations with a wide variety of cuisines, the specificity of its origins in Mesoamerica is frequently obscured by its identification as a pepper–a misnomer attributed to a confused Columbus, who associated it with peppercorn because of its comparable “spicy taste.”

Long before Columbus’ arrival, Native Mesoamericans recognized the chile’s usefulness as medicine. Its association with U.S. Southern and African American cuisine is in part an expression of cultural affinity, as prior to its introduction in Africa by the Portuguese, the people of West and Central Africa used strong spices not only to flavor foods but to treat various ailments. This affinity for the spicy was in part transferred to the chile during the slave trade, when some slave owners actively encouraged the consumption of chiles, based on their own beliefs that they kept slaves healthy.

In Louisiana, the chile’s broader consumption in the mid-19th century is often associated with the advocacy of a man named Maunsel White, a sugar planter who firmly believed that chiles had kept his slaves from getting sick during a cholera outbreak. White created several sauces from different chiles, including the distinctive tabasco variety he introduced almost 20 years before McIlhenny began bottling his. White sold his sauces to oyster bars while actively promoting their consumption among the white slaveholding aristocracy, often distributing bottles as gifts to his friends, including Andrew Jackson.

By the mid-19th century, homemade pepper sauces were popular throughout Louisiana, crafted from recipes that utilized a wide variety of supplemental ingredients and modes of preparation. Most of these recipes featured the more commonly accessible cayenne pepper, however, and so McIlhenny’s product, heralding the use of the distinctive tabasco, was initially a way to distinguish itself in an already crowded field.

Thus, the product most associated with regional identity was originally an eccentric variant. It now stands as one of the most iconic emblems of Louisiana culture, despite being named for a region of Mexico that Edmund McIlhenny never even visited. According to legend, McIlhenny received the original, unidentified seeds as a gift from a Confederate soldier who had recently visited Mexico; he planted them on Avery Island, at the time a sugar plantation owned by his wife’s family. He then forgot about them until he returned following the Civil War and found the chiles, the basis of the family fortune, growing wild.

The specifics of this story are, like many official narratives of history, disputed. It gives no account of White’s previous experiments with Tabasco or of the contributions of both Indigenous Americans and African Americans to the knowledge of and efforts to cultivate the chile more broadly. And yet it is a fascinating story, because of the ways it both stubbornly deflects and embodies its own contradictions about identity, culture and the inextricable intersection between the global and the local. Which in turn makes Tabasco–as a highly refined preservative, source of sustenance and carefully curated brand–a fitting emblem for Louisiana itself.

Ladee Hubbard is a writer from New Orleans. Her first novel, The Talented Ribkins, was published in 2017 and received the Ernest J. Gaines Award for Literary Excellence and the Hurston-Wright Legacy Award for Debut Fiction. Her second novel, The Rib King, was published in January 2021. Her debut collection of short stories is forthcoming in 2022.

Hunger for the Water

Saturday on the Shrimp Lot