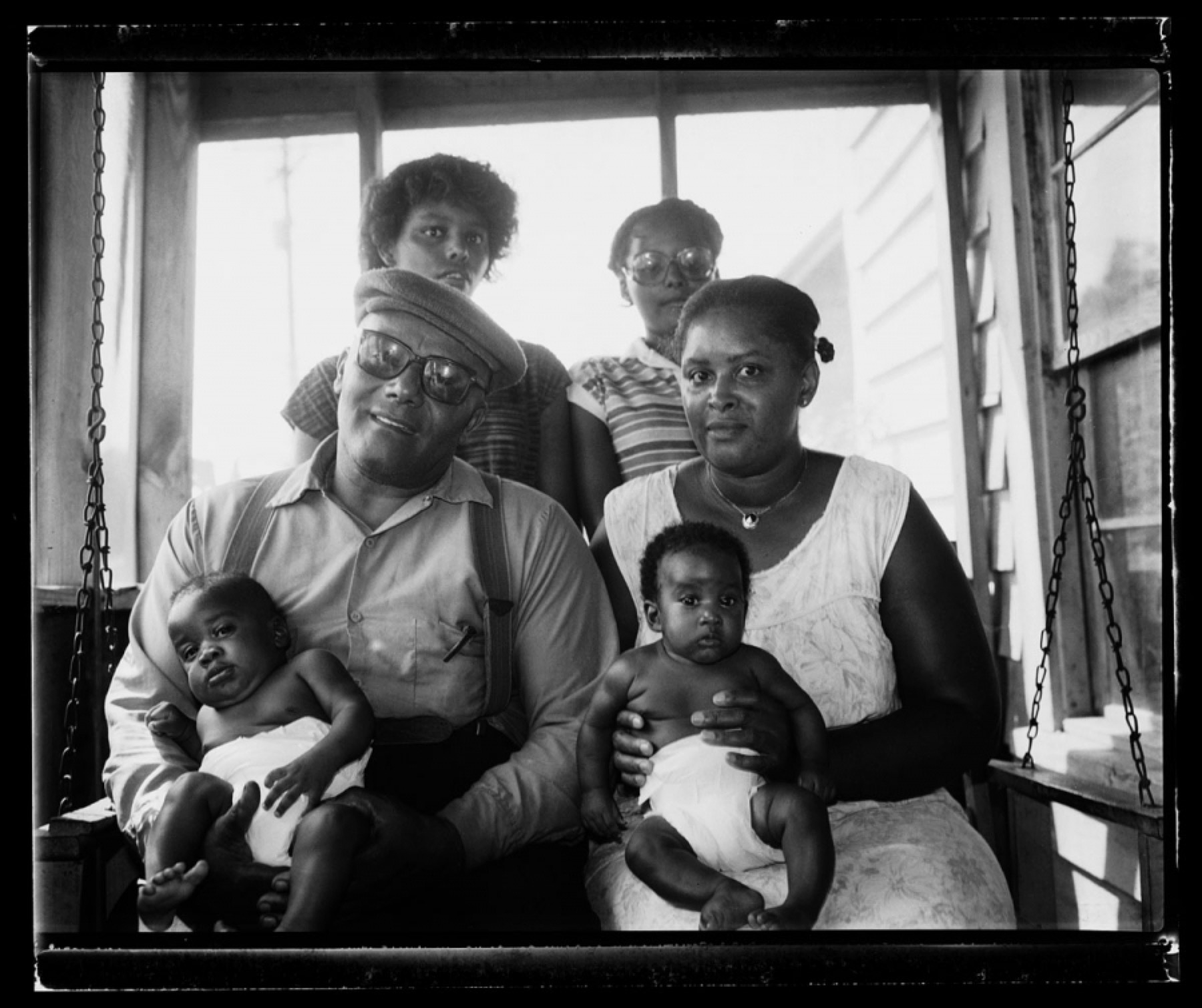 Big Boy Henry and his family at home in Beaufort, 1982. Photo by Tom Rankin

I can’t remember exactly when I met Richard “Big Boy” Henry. I may have seen him playing in Chapel Hill or Durham. But the first time we talked for any extended time was when I visited him at his house in Beaufort, North Carolina, in 1982. We sat on his long, breezy screened porch and recorded several reels of tape of our conversation, our voices competing with the sounds of the passing traffic. Revisiting those May recordings recently, I hear him share his life story—the light and dark of his childhood, his path to music—and I remember how Henry, so kind, patient, and generous, seemed to intuit everything I might want to know. I just had to ask him to say his birthdate, so I could set the audio level on the tape recorder, and he began a lengthy recounting of his early years.

“May 26, 1921. Beaufort,” he says clearly. “On Queen Street.” His mother had six children, he explained, adding in a matter-of-fact tone that two of the six were twins who died. He recalled that as a very young child he would take the “doll baby” that he shared with his three siblings, lay it gently in a shoebox, and preach a funeral sermon over the still baby in its cardboard casket. This struck me then—and now—as a dark and moving preface to his life as both a minister and a bluesman. “Then, after my mother and father separated,” he went on, “I had it rough, kind of tough. Had no other means, so Mother and I were out clamming and oystering to make a living.” In 1933, after missing school off and on to help his mother provide for the other children, Henry moved with his family to the nearby town of New Bern, where he attended school more regularly. His mother took in washing and ironing throughout the community while Big Boy worked at a grocery store, delivering orders on his bicycle. “Sometimes I’d shake pecan trees, sometimes cut wood for a bag of cold biscuits, and bring it home to my mother, brothers, and sisters.” No longer focused on our sound check, I listened through the headphones as Henry continued to chronicle incidents and turns in his life, one story flowing to another. “State your birthdate” was all the prompting Richard Henry needed for the telling—and eventually the singing—to be full, effortless, revealing, and personal.

When I got to know Henry, he was living on Beaufort’s Cedar Street in the old family place, where he lived with his wife, Ann, and their seven children. Henry was a committed family man, an image that seems to contrast with so much popular and romanticized mythology of the rambling blues singer. Growing up surrounded by music—sacred and secular—he attributed his early blues influence to meeting South Carolina guitar player Fred Miller in 1933. Miller traveled the East Coast, Henry explained, and when he was in New Bern, “I would sing for him and he would play.”

Later in the day we moved from the front porch to a quieter back room in the Henrys’ house, where I made a series of recordings of him playing with local musicians. Even with all the influences on his style and songs—Fred Miller, Blind Boy Fuller, Lightnin’ Hopkins, Blind Lemon Jefferson, Sonny Terry, and Brownie McGhee, to name some—Henry had a large collection of originals, could improvise effortlessly (and endlessly) with his talking blues, and never seemed to tire of stories connecting the dots of his life as a fisherman, preacher, musician, and observer of the world. He could glide easily from a voice of defiance to a lonesome wail of abandonment and isolation, fusing the occupational calls of menhaden singers with the eternal sacred pleas for help and ease of pain. He had stopped playing the blues for thirty years, some of that time serving as a pastor to two churches in New Bern. But he returned to the secular music in 1980, explaining that he saw no conflict in being a Christian and playing the blues: what he plays, he said, is “art like any other music.”

Later in 1982, I invited Big Boy Henry to come to Chapel Hill to record his repertoire in the WUNC studios. For two days, he played song after song, his original compositions mixed in with numbers such as “Red River Blues,” a song recorded by many blues musicians but none more influential than the version by Sonny Terry and Brownie McGhee. It’s the tune he first learned from Fred Miller—a foundational song for all that Henry did after. Throughout the session he sang of a rooster being killed to feed a preacher; he told of warehouses burning down; pleas were delivered to the doctor for healing; he improvised stories of unjust sheriffs and judges; he sang verses of love and sorrow and of pain and poison, all punctuated with Henry’s deft rolling guitar style. I saw the studio time as a chance to capture as much as possible, to allow the ease of time to call forth whatever Big Boy Henry wanted to say, play, or sing for the archive, for the lasting record. I asked Henry too often where this or that song came from. “Originated in my mind,” is what he said of “County Jail Blues,” a song he acknowledged was deeply influenced by Durham’s Blind Boy Fuller.

Henry’s most famous commercial record, “Mr. President,” was born as an improvised talking blues performance one August night in Durham while he was opening for John Lee Hooker. “That was August 22 of 1982 and suddenly I thought about a whole lot of things,” he later explained. “Mostly when I’m singing in places like that, everything I sing’s new.” It was Henry’s reply to the Reagan administration policies as he was witnessing them play out around him (Come live with me a little while, Henry sang. Find out how the situation is here). “Wherever I would go, wherever I would sing, people I would entertain, and then on the news,” he said, “people be sitting outdoors losing their homes, have no rent to pay. I think not only Reagan, I think the whole country should have more compassion than that.”

“Mr. President,” produced by Lightnin’ Wells, was released in 1983 by Audio Arts Records. Henry’s call for more compassion was one he echoed in myriad ways throughout my time with him, an old soul with a fresh, original voice. He seemed to weave the biblical with the blues, Sunday morning with Saturday night. “Go live with the blind man,” he pleaded, “go live with the crippled man.” Henry, who died in 2004 and is buried in Havelock, North Carolina, so often was thinking and singing of the little guy, the vulnerable ones, the sick and downtrodden, the forgotten.

“Take My Baby to the Doctor” by Big Boy Henry is included on the North Carolina Music Issue Sampler.

Can We Get to That