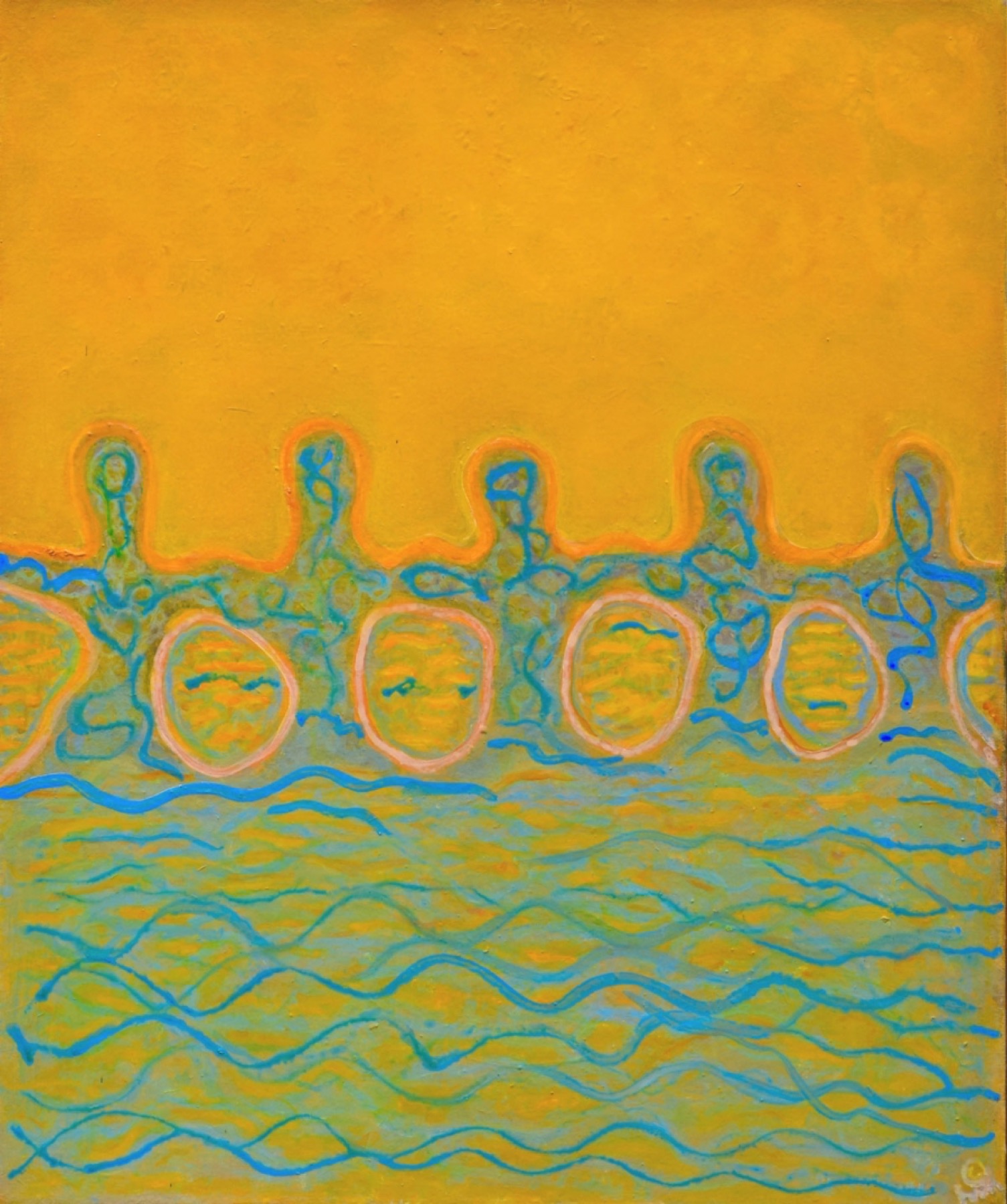 “Ancestors on the Shore” (2015), by Hatty Ruth Miller. Courtesy of the artist

My mother, Louise, was baptized in the Lumber River when she was eleven. Her immersion took place at Harper’s Ferry, a well-known landing on the river where James Lowry, among the forefathers of North Carolina’s Lumbee Indian tribe, established his original tavern in Scuffletown during the American Revolution. By the time of her baptism in 1954, the community was known as Pembroke, a predominately Indian town nestled in central Robeson County. Harper’s Ferry is one of the few landings on the Lumber with a bank clear enough for several dozen people, clustered in small groups, to stand and sing. The preacher and perhaps another church elder waded into the water, awaiting the candidates as each took a turn entering the open pool of darkness. In that darkness, small whirlpools appear and then vanish, tiny whispers of the dangerous undercurrent for which the river is known. I have never attended a baptism there, but I have spent enough quiet time at that spot, reflecting on the potential of those little spirals, that I can instantly recall their invigorating peace.

My mother had accepted Jesus as her savior at a Baptist camp meeting in June of that year. She remembered the powerful singing of Claudie Dial and family—the sought-after Lumbee evangelist—and the preaching of Wade Locklear; the music and words together brought her to such a state of emotion she could not help but step forward at the altar call while the congregation sang, Leaning, leaning, safe and secure from all alarms / Leaning, leaning, leaning on the everlasting arms.

If you’ve ever heard singing at a Lumbee revival you would know why a child would spontaneously step forward to ask forgiveness for sins she had not yet committed (but “was bound to!” as my father joked when my mother told me this story). The singers draw out and wail the word “leaning” to make you yearn to find the love you didn’t know you longed for, the love that will engulf you like the water, and the power to give oneself completely to another and be safe forever from the certain monster of dying in sin. Even eleven-year-olds understand this.

My mother went into the water at Harper’s Ferry with twelve or fourteen others who had been saved in the previous year. “You wore white if you had it,” she remembered. The feeling at the altar had been one of joy, but at the water it was fear, or at least nervousness. “I was so young, and I had never been in water above my head!” my mother told me. “But the preacher and two deacons brought me in and said a short passage, something like ‘For God so loved the world,’ then they dunked me and I came up gasping.”

For Lumbee Indians, being a Christian is about much more than what kind of church you go to, though most of us are Baptists, Methodists, or some variety of Pentecostal Holiness. In 1881, the Lumbee Baptists formed their own association, which now includes over seventy churches for more than fifty-five thousand members (the largest tribe east of the Mississippi). They live in the tribal homeland of southeastern North Carolina, in the Lumbee outpost of Baltimore, and all over the nation. But our granular understanding of places is critical to who we are—not just North Carolina, not just Robeson County, but the dozens of settlements within our territory. Being a Lumbee Christian is about where your family has gone to church. Deep Branch Baptist. Prospect Methodist. Berea Baptist. Shannon Assembly of God. Saddletree Church of God. Burnt Swamp Baptist. Mount Airy.

Lumbees have been Christians as long as any other Southerners. The Second Great Awakening swept us up in godly fervor and we’ve never departed. The ethics of reciprocity and respect that Old and New Testament scripture teach were not new to our ancestors; we relied on them through centuries of relative isolation and invisibility. In spite of the forces that wished to annihilate us, sometimes in the name of Christianity, we are still here because of our relationship to God and one another. Our rituals of singing, praying, death, and salvation have bound our generations—before and through the changes wrought by colonization—and found their most durable expression in Christianity.

The songs I heard growing up, sung at family gatherings, and later as I documented music in recordings at Lumbee churches, ring with longing and sometimes nostalgia. They were standard Protestant hymns, Southern gospel tunes, or shape-note classics, straight from the Broadman hymnal or from J. D. Sumner or the Gaither family: “I Feel Like Traveling Home,” “Hard Working Pilgrim,” “I Am His,” dozens more. The talented ones in my family often learned them not by reading the music but playing by ear, molding and adapting the arrangement and harmonies to suit our preference. Not so much the songs themselves, but the way we sing, especially the emphasis on harmony and blend—the need for every person to have a part but no one to stand out—is what demonstrates our togetherness and uniqueness.

On the other hand, we might have a tendency to hang on to songs and styles a lot longer than other communities who let them go out of fashion; worshipping only with your own kind probably has that effect. My grandparents and great-grandparents, and the generations before that, sang “lined out” hymns. A century or more ago, instruments were as rare as literacy in Lumbee churches. Not allowed to attend schools with whites and reluctant to attend with blacks, Lumbees had their own schools after the 1880s, which offered a substandard, if beneficial, education. The few churchgoers who could read well enough stood up in front of the congregation and spoke the first two lines of a psalm or a hymn, and the congregation then summoned the tune from memory’s depths. I recorded some of these hymns twenty-two years ago, and even now I can hear the low hum, the polyphonic tenor harmonies, the melody buried well within a nest of knowledge generations old.

“Our beliefs were so simplistic,” my father, Waltz, remembered about his childhood. “All Daddy told me about being saved was how happy he was after it had happened to him.” The level of conviction involved was left to my father’s own discernment. He said, “I remember riding through St. Pauls”—a predominately white town—“on a Sunday and seeing a man washing his car. It was a Packard. I knew for sure that man was going to hell.” My father was particularly precocious in these matters; he got saved at age seven. He was raised Holiness Methodist, at New Hope Church near Pembroke, where they didn’t dunk, they sprinkled. New Hope’s was a small but old congregation that had likely existed in one form or another for at least eighty years by that time. New Hope was also the site of the first Lumbee school, opened in 1887. My father’s father taught him to see how he was part of this larger story, and so my father taught his children the same.

My father remembered his conversion experience, over seventy years ago, like it was yesterday. It was July, before tobacco season started, when churches had two meetings a day for a whole week and served lunch on the grounds every day. Imagine seven-year-old Waltz in his Sunday best, walking to church without his parents, who could not give up their weekday chores to attend meeting that morning. But Waltz was happy to go. He walked from his house across the grass to his grandmother Martha’s, then turned past the Sandcutt graveyard, resting place of many of his own ancestors. Though Rhoda Lowry, the widow of outlaw Henry Berry Lowry, was long gone by that time, the unscraped, muddy dirt road Waltz walked skirted the woods that concealed her last homeplace, across from his grandmother’s farm.

Leonard Oxendine also lived on that road; he was not a saved man, everyone knew that. He was a bootlegger, violent, and that morning our boy had already heard that Leonard had killed a man the night before. Waltz was curious about the killing but did not expect to come across the dead man’s body, lying on a tobacco bench underneath the shelter of Leonard’s barn, within sight of the road. The story he had heard about the killing—that Leonard shot the drunk man while he was running away—drew Waltz inexplicably to the spectacle of the corpse. He walked up to the body and stood just feet from it, the first time he had seen a “raw dead man,” as he put it. (In his eighty-plus years he saw no other.) The man looked “typically Indian,” he recalled—medium height, thin build, brown skin and hair—and Waltz at first felt sorry for him because he knew the man had died “in his sin” and would go to hell. Then the boy became frightened—what if he got killed in his sin? He didn’t want to go to that “bad place,” he said. So he headed straight to church. The preacher that day was Isaiah Locklear, a legendary speaker, but for Waltz, “it didn’t matter if [the sermon was] a dog barking; I was going to get saved.” He went forward and testified. And throughout his younger days, family and neighbors praised my father for getting saved at only seven.

One of the singular deaths in Lumbee history is also a unique moment in Lumbee music—a man singing a melody alone, on the gallows. My great-great-grandfather on my mother’s side, Henderson Oxendine, was the last man publicly executed in Robeson County, in 1871. He belonged to the notorious Lowry Gang, led by his cousin Henry Berry Lowry, a band of outlaws committed to a violent revenge campaign against white supremacy during the Civil War and Reconstruction. The state hanged Henderson for a murder he likely did not commit (though his guilt in other murders was pretty likely). He was noted for his singing voice, and after he mounted the gallows on a cold, rainy day in early spring, he sang two hymns in the lined-out tradition: “Amazing Grace” and the Methodist hymn “And Can I Yet Delay.” The first gives thanks for God’s grace and salvation, the second evidences a reluctance to yield to that same salvation, especially when it comes in the form of death. Henderson’s relatives buried him at the Sandcutt graveyard, near my father’s homeplace and where he rests now.

Embracing contradictions, not merely seeking relief or redemption from them, is a hallmark of Lumbee values. It is this embrace, rather than our uniqueness among other black and white Southerners, that gives our community coherence. It gives our faith, expressed through singing and worship, a meaning that lingers well past life. The conversion experiences of my mother and father speak generally to the differences between men’s and women’s roles and responsibilities in the Lumbee world. My mother converted out of a desire to belong, to love and be loved. My father converted with a conviction that he could defeat sin and evil and escape his fearful fate. The circumstances of their conversions are telling: my mother’s, during singing; my father’s, after encountering death itself. Harmony is everything, then and now. Melody is only part of the story.

“Streets of Gold” by Lumbee is included on the North Carolina Music Issue Sampler.

Malinda Maynor Lowery is a member of the Lumbee Tribe of North Carolina and author of The Lumbee Indians: An American Struggle. She is a professor of history and director of the Center for the Study of the American South at UNC Chapel Hill.