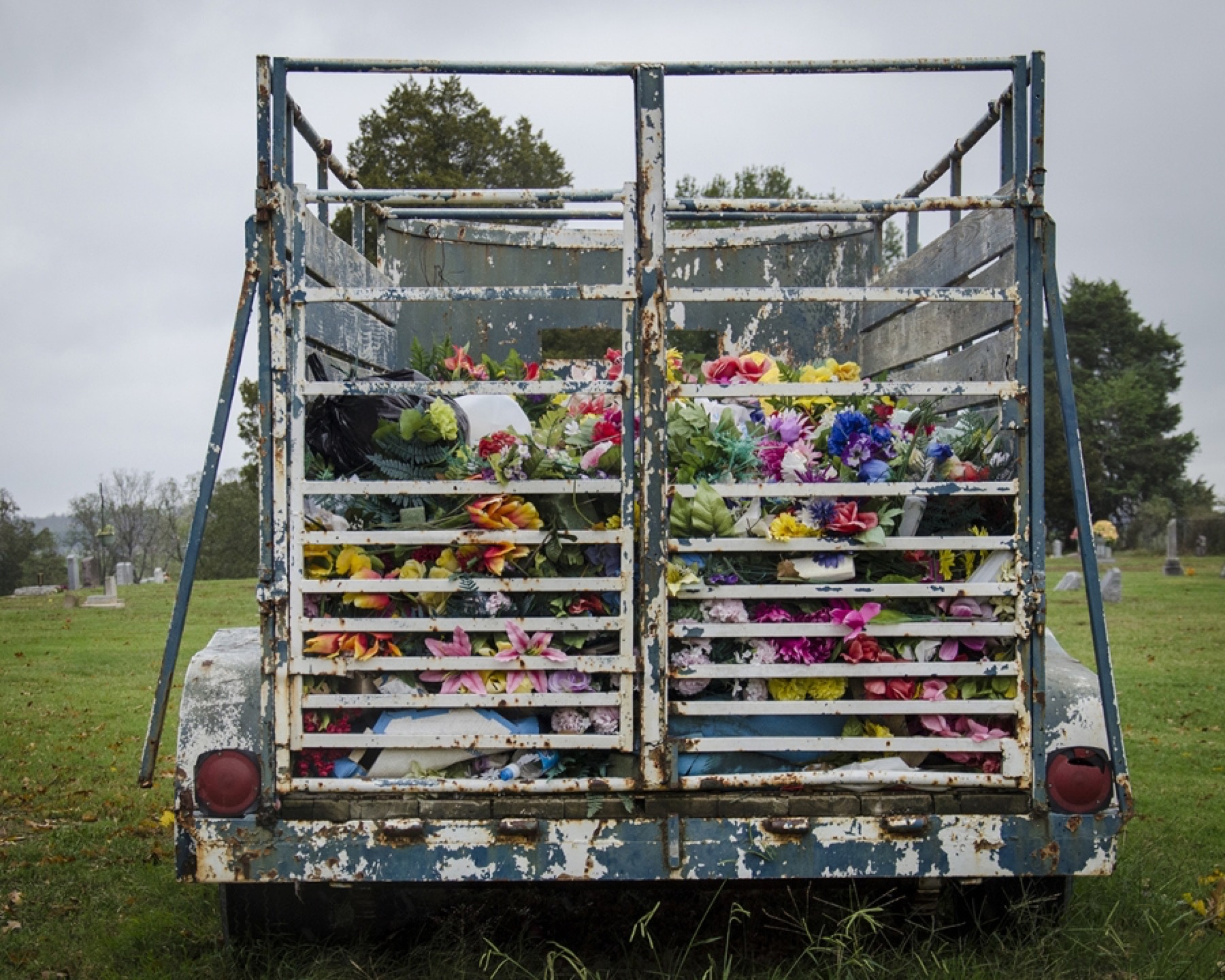 “After Decoration Day, Garland Cemetery,” from the Haskell Co. series (2012) by Jacquelyn Sparks

Not very long ago I was packing my daughter’s Hello Kitty lunchbox when I heard a squeal of brakes and a metallic crunk from the road out front. In the morning commute, a young antlered buck had been walloped in the street by a small car. The deer was still alive but lay on its side against the curb behind the parked car my wife would soon use to drive our daughter to school. It’s a small town, so the police cruisers were on the scene within minutes, turning the morning from black to a vibrating blue. We hustled the girl out to the car, told her the deer was just resting, and I watched from the porch as my wife peeled out with my daughter’s face flickering in the rear window just as the first officer on the scene, a short and muscular young woman, fired her service pistol.

There are days in rural central North Carolina when death seems more insistent than is strictly necessary. The road in all directions is a horror, a running abattoir. Or like Death got in the cab of his Peterbilt and forgot to latch and lock the back door. In the mornings it’s a possum, a skunk, a fox, countless raccoons, an occasional beaver, stray dogs and cats. When the poultry plants were still running, a white-feathered, breast-heavy chicken lay every few miles along the fog line, having somehow escaped the open cages on a flatbed. Sometimes there’s a vulture with a broken neck lying dead beside the animal it had been feeding upon. Deer are plentiful and gory. Vultures circle the town.

A child, seeing death, makes unusual accommodations for it. Death is confusing, nearly unfathomable. Death could be anything, could take infinite forms. It’s a message from a world only suspected. For the moment–and such a short moment–the child knows how little she knows.

The courthouse in the center of town was the lodestar at the center of my daughter’s world and by reference to it she had learned distances and directions. She always looked for the steeple to shoot out of the trees a mile before we ever reached home. When it burned, she and I stood at the fire cordon watching the roof cave in, and she asked me Can buildings die? Why not, I thought. The framing timbers were the last to go after the roof, and they jutted into the air as if in rigor mortis. She had seen that before, in the legs of a dead coyote. The body of the courthouse had been deranged, and she had seen that too.

My daughter understands time now, in part, as a measure of days since the destruction of the old courthouse. She knows that buildings don’t die in the literal sense, and so she has begun to understand metaphor. And as for death, it’s not as much the roadkill (though she won’t eat chicken, not ever no way she says), but that deer that got hit in front of our house one morning. As far as she ever wanted to know, that deer survived.

I watched from the window. For a moment, once my wife and daughter had spun out of there, the world seemed to be in its proper order and I only a passive observer: the town, the county, the herds of deer and other ungulates, the trucks and cars speeding toward provinces unknown, the bullet ripping toward the animal, every tooth and claw properly deployed.

Two things to know: first, that a white-tail’s skull is tougher than you might think, and that it’s very hard to shoot a pistol straight under even the best of conditions, which these were not.

The deer leapt up at the shot. Oh shit, I thought, now entirely absorbed in the drama. The animal flung itself, gangly and twig-legged and panicked, against a telephone pole, a fire hydrant, and an azalea bush, which it tripped over. The deer fell to its knees, breathing heavy, and the officer shouted at her partner: Well hell, Ed, you going to help me here? Again she fired, this time from about three feet.

Now the buck became really agitated. Later I would make a note of how the deer’s scraping and leaping had marked the gravel in twelve places. Months later I would find the two .45 casings embedded in the gravel. Just then, though, I realized I was about to do a thing, and that this thing was not the kind of thing a man like me ever does. A man like me is happy just watching, he’s resentful when this kind of situation just moves in on him and forces him to say, Well what the hell is this? and the thing itself says, I am Death and you know it.

In the basement I kept an ax. I have no rifle, I have never hunted animals. I once learned to hunt men on behalf of my country, but that was long ago. I armed myself as best I could. When the deer saw me come around the corner of the house it fled a few steps and dropped, breathing, on its side.

In my flannel boxers, a dirty muscle shirt, and old man slippers, I brought the blunt end of the ax down on the animal’s skull, intent on crushing it dead and quick. Twenty feet away children passed in cars on their way to the school. What must they have thought of this maniac? The deer flinched and cried after each blow. I became angrier. The whole setup was bullshit, the whole chain of events and coincidences, decisions and lies and wishful thinking, the accidents that had brought me to that moment had been all misjudged. This was how it would all end. This is how it had to end.

It took nine blows to the head before I was certain the animal had died. My hands were covered in blood, as was the ax. My slippers still have blood spots I can’t get out. The police officer told me to be sure to wash hands good deer got diseases. I went inside. The next day I learned from my spy in the district court that I had become a minor celebrity among some of the police, and that if people didn’t know who I was before, they did now.

No one ever told her this, but my daughter came to believe that the deer had been saved by a heroic veterinarian. All veterinarians are heroic, see, and I never said otherwise. This is how things should work: You want death to go away and so it does. The outcome of your prayers is happiness.

Recently her grandmother, my mother-in-law, became sick. The two were very close. The time came for telling my daughter that her grandmother wouldn’t ever get better, and she screamed: Why? Not, Why is there death? but more to the point, Why can’t you do anything about it? Why won’t you do anything about it? I said I just couldn’t, that no one could. I hadn’t remembered how cold those words sound the first time you hear them. Finally she understood. I know she understood because she said, the deer died, the one with the car that time. I said yes though she wasn’t asking.

Duncan Murrell is a writer, a contributing editor for the Oxford American and Harper’s Magazine, and a track and field coach. He lives in Pittsboro, North Carolina.