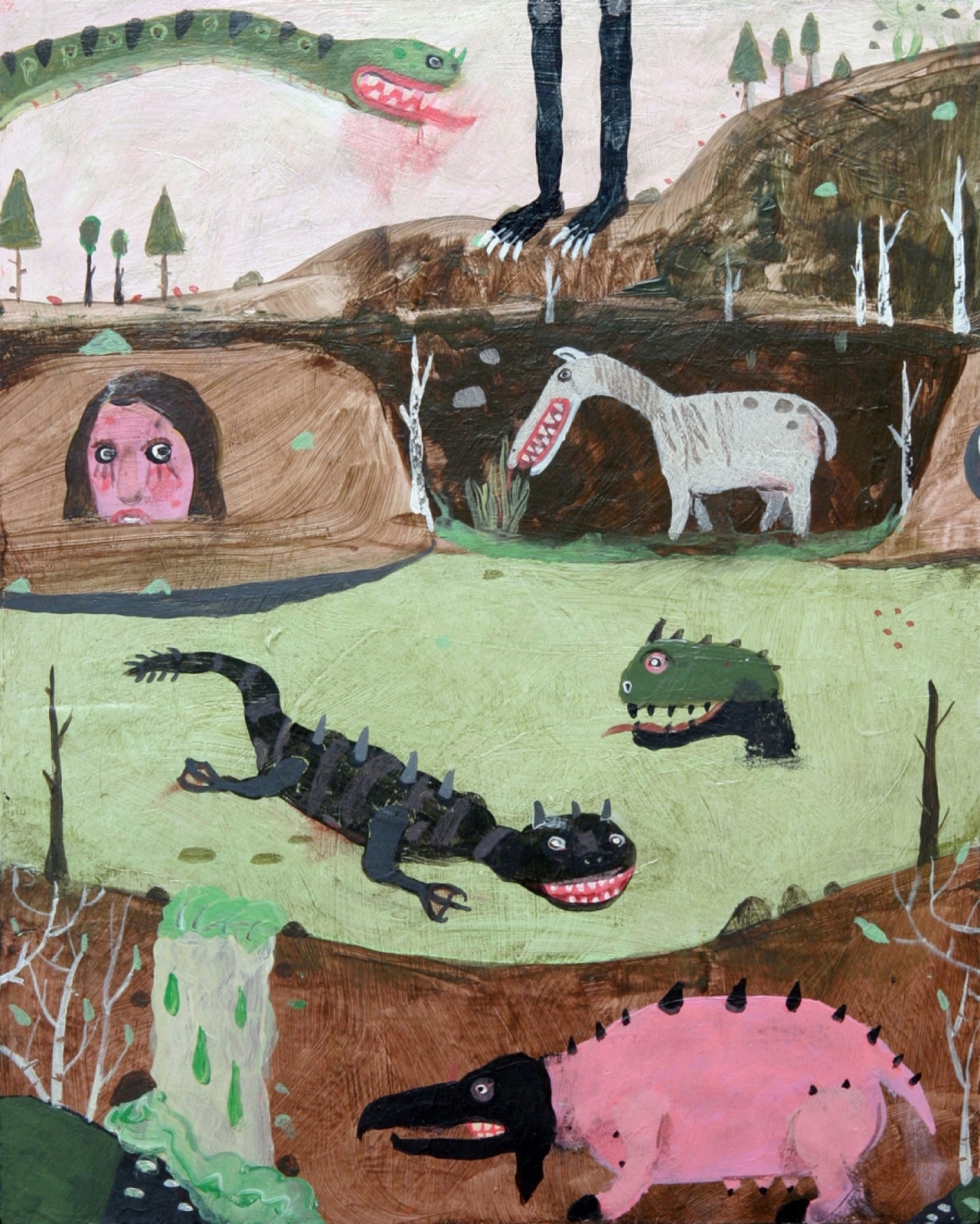 "Thaw," by Scott Daniel Ellison. Courtesy of the artist and ClampArt

Homage to a Louisiana Back Road

I was somewhere between Raceland and Thibodaux, six years back, when I spotted my third alligator on the shoulder of Highway 90, the alternative route headed west out of New Orleans. At that time, I hadn’t driven this road in well over a decade, but as I wrenched the car into the left lane, I made up my mind to revisit the highway at least once per year, preferably in late summer to early fall, when the average temperature in South Louisiana falls to the mid-90s and those imposing lizards come crawling out of their swamps and jungly environs to sun themselves on the steaming pavement. If the proverbial road to hell is paved with good intentions, the way down 90 is cracked, potholed, and teeming at times with moving speed bumps that challenge drivers to a game of life-or-death Frogger.

Growing up not five miles off the highway, I found that just about everyone knew someone who had lost their life while traveling that stretch of pavement. Back in 1967, the actress Jayne Mansfield became the road’s most famous casualty: killed when the car she was riding in rear-ended a mosquito-fogger truck, obscured by the hazy shroud it was leaving behind. But despite my parents’ warnings of blood-splattered danger, I took that route to and from high school every day, rather than the safer passage through the suburbs. Mornings, I wrestled for roadshare with oversized Hemis piloted by malevolent oilfield roughnecks en route to the petro-chem facilities that engulf the Gulf Coast. Harvest season meant keeping several car lengths from titanic, open-air sugarcane haulers, which launched loosened stalks of windshield-shattering cane into traffic.

The Louisiana leg of U.S. Route 90, which runs from Van Horn, Texas, to Jacksonville Beach, Florida, skirts an ugly scar of four-lane blacktop across the sole of the state’s boot-shaped outline. There are a few sites of value along this stretch of highway, and maybe more I haven’t found yet. I do stop often at Frank’s Lounge, a characterless bar parked along a strip of truck stop casinos, adult video stores, and fried catfish shacks outside the town of Des Allemands. There, they mix up what must be the world’s best Bloody Mary: garnished with house-pickled green beans, spiced to taste like a seafood boil, and served in a Styrofoam cup to ensure portability (even the largest size, I’ve found, will fit in most drink holders). Enjoying a tomato and vodka behind the wheel is, I realize, a fool’s liability, but my theory is that this drink’s popularity—Frank’s purports to sell more than 1,000 per week—owes less to its flavor and more to the liquid encouragement it provides on this stretch of road.

For as long as I can remember, Louisiana’s transportation authority has threatened to transform the highway into an interstate. Worn, rusted, and hurricane-battered signposts, now nearly three decades old, dot the roadside promoting the “future corridor” of I-49. Eventually, we’re promised each year, Highway 90 will be made safe. The road will be repaved, brought up to modern standards and conveniences. The motorists will either cheer or bemoan the passing of a once great back-roads highway, but the alligators won’t care.

Rien Fertel is the author, most recently, of The One True Barbecue. He is currently writing a book on Southern rock.