I'd been to Vino's, the brewery/pizzeria in my neighborhood, plenty of times since moving to Little Rock in September, probably more than any other restaurant here. But until a couple of weeks ago I'd never noticed the unassuming, though unusual, pair of teal bleachers in the smokers' courtyard out back—a little weathered, used as a spontaneous canvas for a few aspiring graffiti artists and to extinguish a cigarette or two. Or I'd noticed them peripherally but had never really looked at them or considered them. So I'd missed, embossed in dirtied white upon their flanks, the unmistakable emblem of my hometown: the majestic crown of the Queen City, Charlotte's municipal brand.

It is an odd sensation, encountering a bit of personal history in an unexpected place a thousand miles from home. At first I was just confused. I abandoned conversation and approached the seats for closer inspection. I felt the raised inscription—the curvature of the crown culminating in the period on top—I examined the sans serif row label 'A,' lowered the spring-loaded green plastic tongue, and sat down. It was as I'd suspected: these were bleachers from Charlotte Coliseum, The Hive, former home of the Charlotte Hornets.

For many men my age—born in the late '80s and tempered by the '90s—Michael Jordan was God. His image permeated our childhood. When we learned about success, it was through his (repeated) example. (To this day, in moments of particular concentration I reflexively stick out my tongue.) But despite Michael Jordan's outsize influence, the Charlotte Hornets provided the definitive iconography of my youth.

Jordan was God, omnipotent and inaccessible, existing on some other plane (in a dimension called Chicago, wherever that was), but the Hornets were prophets, whom I could watch, whom I felt I could know, whose pinstriped chests bore the name of our shared hometown, and below it all of my favorite numbers. Dell Curry (30), Glen Rice (41), Kendall Gill (13), Vlade Divac (12), Matt Geiger (52). And the Trinity: Alonzo Mourning (33), second overall pick in the '92 draft; Muggsy Bogues (1), the shortest player in NBA history at 5'3," a hero befitting a child; and Larry "Grandmama" Johnson (2), from the iconic Converse commercials.

The release of Space Jam, featuring Jordan and two Hornets, Bogues and Johnson, alongside Bugs Bunny and the rest of the Looney Tunes, was an unabashed high point in my adolescence.

When I think of the Charlotte Hornets I think of my grandfather, a season ticket holder from the team's glorious inception in 1988 until its embattled removal to New Orleans in 2002. According to my dad, there was a six- or seven-year stretch in there when Grandpa didn't miss a single home game. No real correlation exists between the team's relocation and Grandpa's death from cancer six months later, but the coincidence is compelling; The Hive was practically his second home.

The enduring image I have of my grandfather—maybe this is true for everyone—is from below, from the living room floor, amidst Hot Wheels or Pogs or Christmas presents, looking up: loose khakis, a tie and sweater, flat cap and big glasses, his pipe lodged in the corner of his mouth, faint smoke rising, an arthritic paw hermetically clasped around a can of beer or a tumbler of amber-colored juice, legs up, in a perpetual recline. He seemed to be permanently ensconced in the burgundy La-Z-Boy in the corner, sort of beached there, his enormous stomach arranged just so, peering over it at the television on which was invariably a sports game—usually two at once via picture-in-picture—his stereo CD player on the stand beside him emanating jazz forever. Here is what Grandpa loved: his ties, his recliner, his jazz and pipe tobacco, peanut butter and scotch, his handicapped parking pass. More than the rest, I suspect, Grandpa loved sports—and none better than basketball.

On the wood-slatted walls of the smoky and dimly lit basement billiards room—generally off-limits to grandchildren, though we caught glimpses—below the high shelves where his hat collection was displayed, were hung the Hornets team portraits, which Grandpa received every year with his ticket subscription. The team in its annual iterations, a few different faces season to season, would be superimposed over the Charlotte skyline: all my favorite players standing proudly amongst the skyscrapers uptown.

The tickets themselves came every year in one batch, as a book, to be torn out individually on game day. Grandpa never threw away his stubs after the games but would save them for us kids to collect and trade arbitrarily. Every ticket featured a different photo of a Hornets player in action—Dell Curry rising up for one of many threes; Muggsy dribbling through a forest of knees; Zo clutching the rim.

Grandma didn't care for it, but there was a regular crew of old men that would go to the games with Grandpa. Or he would invite my dad or one of my uncles. Or, often, he would go alone. On occasion, Grandpa would take one of us along.

On December 20, 2000, the Hornets hosted the Miami Heat, in what would be one of the most statistically boring games in the recorded history of professional basketball. The final score, 65-56, was the second-lowest combined total in NBA history and the lowest since 1955, and the Hornets' 65 points was a record for futility in a win. The teams combined for 90 missed shots that night. "Nasty is a pretty good way to describe (it)," said Hornets shooting guard David Wesley (4) afterward.

I was there with Grandpa, way up in the third level where his reserved seats were, near the dome's roof. It was a poorly attended winter weekday game and he was sorry that it had been such a bad one, but I was twelve and I was at a basketball game at The Hive, just him and me. And the Hornets won.

This is one of my final memories of my grandfather. It was the last Hornets game I ever went to and his last season in the upper level bleachers. Once he got sick, he didn't go to many more games—he barely left the recliner at all. And soon the Hornets were gone, and then Grandpa was too.

George Shinn, a country businessman, brought the team to Charlotte when small-market franchises were laughed at. He had validation though with the coliseum, a brand new, state-of-the-art dome, with more seats than any arena in the NBA. It was The Hive that leant credibility to his bid and the league acquiesced, granting the Carolinas its first professional sports franchise (and paving the way for the NFL's Carolina Panthers, founded in Charlotte in 1995, and the NHL's Carolina Hurricanes, founded in Raleigh in 1997).

The Charlotte Hornets were immediately profitable—surprising everyone not from "basketball country," as North Carolina is sometimes called, due to the many college hoops dynasties scattered about the state. Despite initial on-court mediocrity, the Hornets hosted 364 consecutive sellouts and had the highest attendance in the league during each of their first seven seasons, breaking numerous records. But as the years passed the glamour faded, the shine dimmed, and Shinn turned out to be a louse. Embroiled in a sexual assault scandal and entangled in disputes with the local government, he moved the team to New Orleans in 2002.

Charlotte Coliseum continued to be used for a while after the relocation, employed intermittently for concerts, carnivals, conventions, tradeshows, and the like. And the city still had a WNBA team then, the Charlotte Sting, though the original context for their moniker was gone. At one time a cutting-edge basketball arena, The Hive became a weathered, unused, concrete shell, a neglected symbol of the team's bitter departure. It was finally demolished, with little fanfare, in 2007.

Considering the bleachers at Vino's, there must be pieces of The Hive scattered all around. I asked Kai, our regular waiter—who's been with Vino's some twenty years, since he was in high school—about how those four seats came to be there, but he didn't know. No one seemed to know. It was as if they'd always been on the patio out back, a good place to sit and smoke, watch people doing the same. No one knew what those seats had seen.

In January, the NBA officially announced that the New Orleans franchise would be changing their name to the Pelicans, finally abandoning the inherited Hornets label. The Charlotte Bobcats—our replacement team, no longer owned by media mogul Bob Johnson, for which they were (inexplicably) named—are one of the NBA's worst teams and are in desperate need of a rebranding. For many years a local initiative called Bring Back the Buzz has sought to return the once-cherished Hornets name to the Queen City, and now it seems this may happen. His Airness, Michael Jordan, the Bobcats' current majority owner, is game.

There are certain sentimental advantages to such a move, pricey though it will be (in the neighborhood of three mil). An established team accumulates history and significance for all of its fans. Children can grow up rooting for the same franchise their parents and grandparents loved. And the Charlotte Hornets is one of the more clever names in sports, sourced from a Revolutionary War anecdote; after meeting fierce resistance there in 1780, Lord Cornwallis bitterly dubbed Charlotte a hornet's nest of rebellion.

If—or when, I'll venture—the Hornets return to Charlotte, the spirit of my grandfather will come with them. (Though, for record-keeping purposes, the statistical legacy of the original Charlotte Hornets franchise will remain in New Orleans with the Pelicans.) My dad is now a Bobcats season-ticket holder, though he attends even fewer games than the team wins in an average season (not very many), keeping them only out of a stubbornness to abandon a grandfathered price (he bought in 2004, the inaugural season). Should the familiar teal and purple replace the orange and navy epidemic, should Hugo the Hornet kindly escort Rufus the Bobcat to the nearest exit, I bet my dad will show up more often, that discount finally paying off. I'd like to think that one day he'll take his own grandchildren to a game, to watch the Charlotte Hornets.

Grandpa used to give us money on our birthdays, but he would do this thing—he would collect our age in dollar bills, neatly fold them in half, and put them in his shirt pocket. We always had our birthday dinners at Grandma and Grandpa's and, at the right moment, he would invite the birthday grandchild onto his lap and say, "Have a look in here," tapping the pocket. "How many are there?" he'd ask as we pulled out a thin crease of cash and carefully counted up to our new age. "Well, look at that," he'd say with a quick wink.

Even as the gag became predictable and I grew too large for his lap, Grandpa kept it up, waiting then until the last moment, knowing I'd be expecting it all through dinner. And just before I left, at the door, he'd pretend to have forgotten and beg I look in his pocket. If I was lucky that year, folded in with the twelve or thirteen ones would be a pair of Hornets tickets. And before I could say anything, Grandpa would wink and close the door.

I'd see him then, on game day. 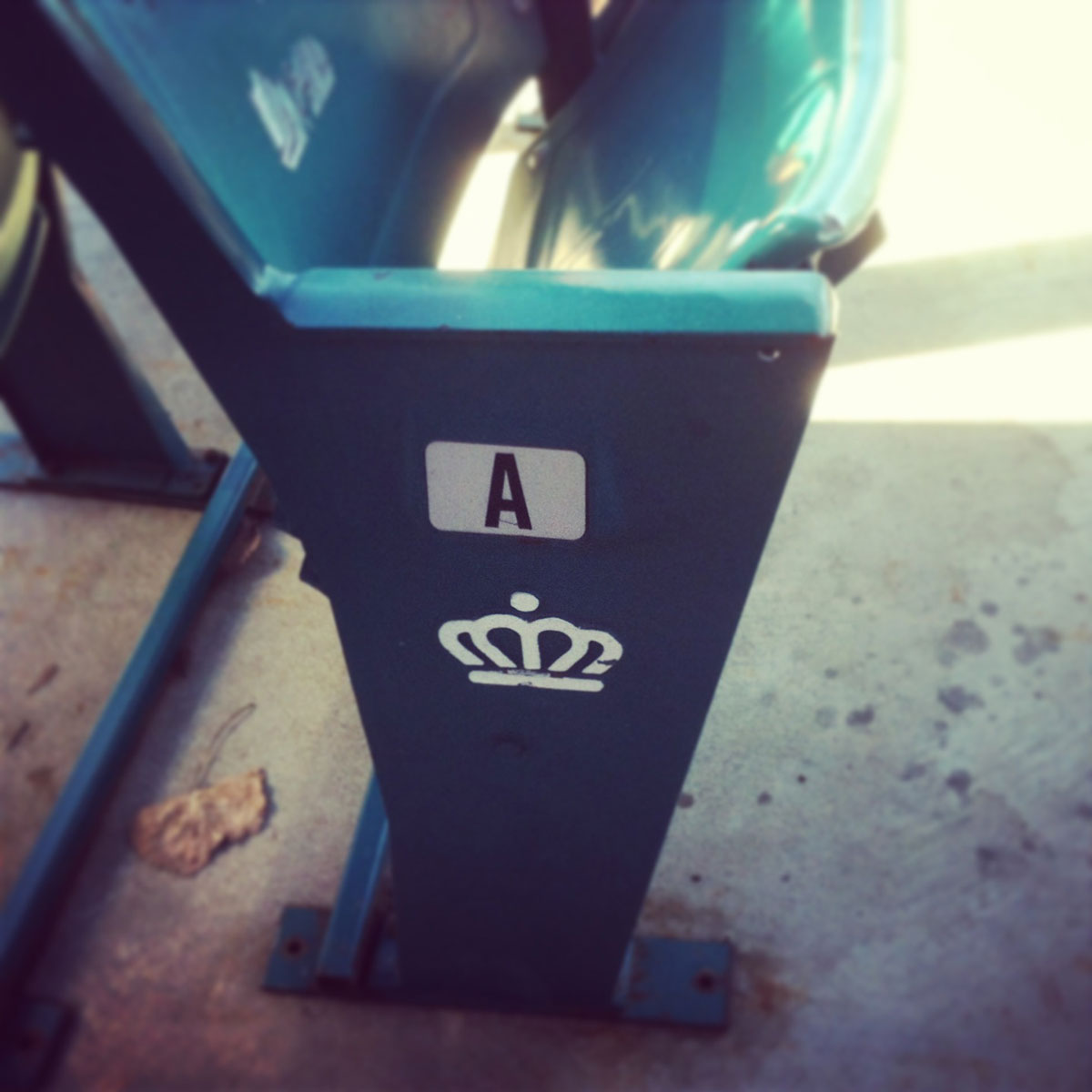