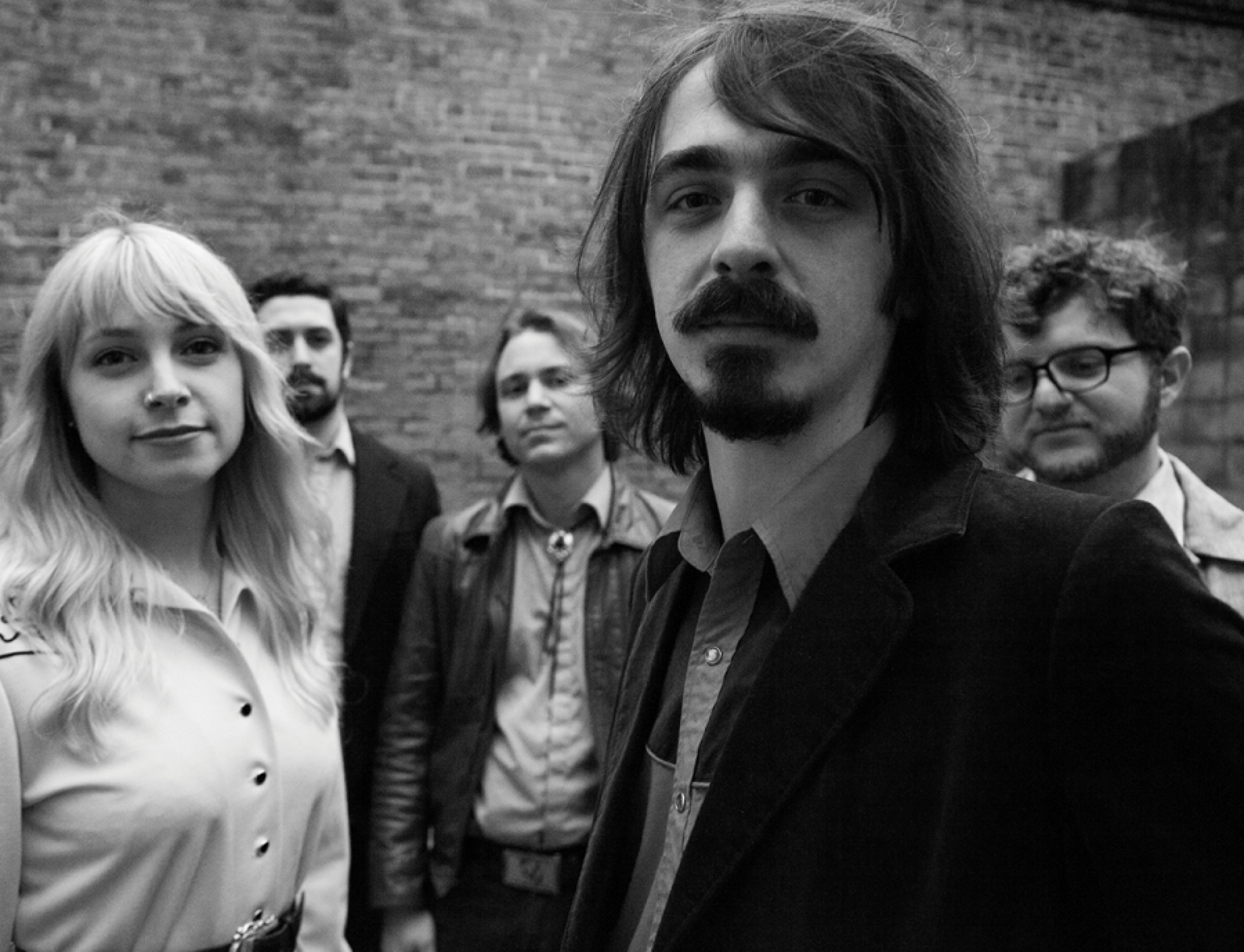 Since their inception more than a decade ago as a band of teenage musical wunderkinds, Feufollet has been leading a revival in Cajun music and bringing the traditional tunes of Acadiana to a wider audience. Their last album, En Coulouers (2010), earned a Grammy nomination and a nod from Elvis Costello, who called it “the most beautifully melodic album I’ve heard all year.”

In the years since, the members of Feufollet—which means “swamp fire”—have been pursuing diverse musical careers and retooling the band after the departure of former lead singer Anna Laura Edmiston, who ran off to join the circus, literally. (Edmiston left the group under amicable terms in 2012 to tour with Cavalia: Odysseo, a theatrical circus created by one of the founders of Cirque du Soleil.)

Next week, Feufollet will release Two Universes, their first album in five years. The album debuts vocalist and fiddler Kelli Jones-Savoy, as well as a strikingly different sound: less accordion and more honky-tonk. It signals a radical departure from the Cajun music tradition on which Feufollet built their identity and is the first of their albums not sung entirely in French. Although Jones-Savoy displays a brilliant bilingualism, her roots are in the old-time music of North Carolina, and this translates into her songwriting.

And Two Universes is a showcase for songwriting. Feufollet’s earlier albums relied heavily on the band’s arrangements of traditional Louisiana tunes, while this album features their own songs almost exclusively. For those of us who have enjoyed their music without ever comprehending a word of the French, it is a pleasure to finally be able to appreciate their talents as lyricists, as in the duet “Red Light,” where Jones-Savoy and Feufollet co-founder and frontman Chris Stafford trade off harmony and opposing viewpoints:

I was curious about the story behind this new project, so last month I spoke by phone with Jones-Savoy and Stafford. I caught them at Stafford’s music studio in Lafayette, getting ready for a spring tour.

Two Universes is the first album you’ve put out since Anna Laura Edmiston left after almost a decade with Feufollet. How did you have to reimagine the band after her departure?

Two UniversesChris Stafford: Anna was a huge part of the band and a huge part of the sound, and when she left we had to totally retool. It took a while because we had a big hole to fill: she was the other singer and voice in the band, and she was the other songwriter. She would write songs and I would write songs, and the band would arrange them together and play them. Anna Laura’s mother is Québécoise—from Montreal—and so her first language is French. Pretty much everything Anna would write was in French.

Kelli has a different linguistic background than Anna Laura. She’s also much more influenced by old-time and country. So when we got Kelli in the band, she brought all these new songs. We got her, but we also got her catalogue.

Kelli Jones-Savoy: You hired my catalogue?

CS: We needed someone to sing and play, but we really just wanted all your songs.

I caught your performance last fall at the Gertrude Ford Center in Oxford, Mississippi, which was a mix of your own songs and traditional Cajun tunes. How do you mine the old source material in your music?

CS: We built a lot of the repertoire and the sound of the band by finding older songs and making new versions of them. Our fiddler, Chris Segura, works in an archive at the University of Louisiana at Lafayette. Over the years, we have done a lot of songs that he found in there, stuff from the Lomax recordings from Louisiana. On our last CD we had a song, “Ouvre la Porte,” that was found there. The new album is really a departure from that. It’s all original music by us except for one song that is a cover of a friend’s song.

The focus this time around was to put together a whole record of original stuff. In our band we have a lot of songwriters. Kelli and I are the main songwriters, but our bassist Philippe Billeaudeaux also writes, and our keyboardist Andrew Toups is a songwriter. We all appreciate songcraft.

Some of the songs were things that either Kelli or I had lying around, songs that I had written earlier, when I was eighteen or nineteen. And some are newer songs written in the last two or three years. Most of them weren’t even written to be “Cajun” songs. I play a lot of different styles of music, as does Kelli and everyone else in the band.

There are only four French songs on this album, when all of your other albums were entirely in French. What caused that shift? Do you expect any criticism of that choice from your francophone fan base?

CS: We speak English primarily, as our first language, so to write songs in English is not that crazy. But a lot of the way we’ve built our careers was attached to the French cultural preservation side of the music, so we’ll see if people get upset about our singing in English. We’ve done the cultural preservation thing for a very really long time, and right now we just want to be songwriters and musicians and make art first and foremost.

What was it, then, that originally drew you to singing Cajun songs in French?

CS: For me personally, and also for our bassist Phillipe, we grew up going to school pretty much completely in French. At our public school in Lafayette, we have a French immersion program. So all of our core subjects besides English language arts were taught to us in French for our entire lives. I was fluent in French at an early age, so I could understand the stories of the songs.

But Kelli, you didn’t grow up speaking French—

KJS: No, I grew up in North Carolina, and I’ve been in Lafayette for nine years. I went to the University of Louisiana to study dance, and because I was interested in the music, I got into French through that. My husband speaks French, as does his whole family. I basically wanted to understand dinner conversations—people would come visit and they didn’t speak any English—so I started taking language classes at UL. Also, I wanted to sing Cajun songs. I was already playing them on the fiddle, so why not sing them, too?

How do you make the French lyrics come across so naturally? Do you catch flack if you get it wrong?

CS: She doesn’t get it wrong!

CS: There’s a whole lot of incorrect French that you’ll hear around here on the regional radio. A lot of people didn’t have the opportunity to learn French as a kid, so people getting into the music later on in their lives might learn it more phonetically. French is a difficult language, especially our Cajun regional French. There are so many little idioms. So, yeah, you hear a lot of stuff on the radio that’s gibberish. It’s really important to us that we never do anything like that. If you’re just going to be singing in French gibberish you might as well make up your own language. You’re not saying anything at that point.

In Lafayette, you are at the center of the Cajun experience. How’s Acadiana different from the rest of the country?

CS: Lafayette is the center of this cultural revival. It’s a hub, especially linguistically. Now, it’s very, very cool to be Cajun. A lot of people in their twenties are into discovering the traditional ways of doing things: the music and foodways and craft-making. I guess that movement exists anywhere in the country. I think people really yearn to have something that’s authentic and specific to their area, and when you live in an area like we live, there’s so much to find that all of us can be proud of. Now everybody has tattoos of the state of Louisiana on them.

You both come from very musical families. How did your families influence you?

KJS: My dad, Carl Jones, plays music and that’s been his only job most of my life. I grew up around the old-time music scene in North Carolina and going to festivals and meeting all sorts of people and hearing all sorts of music.

CS: Everybody is pretty musical in my family. My brother is the drummer. My grandfather played in a swamp pop group in the Fifties called Bobby Page and the Riff Raffs. We actually do one of the songs they did, a rock & roll version of the Cajun song “Hippy Ti Yo.” We cover it live.

Most people in my family can sing harmony and they appreciate music. I didn’t go to college because I wanted to do music full-time, and nobody got upset.

I’ve read that Lafayette has “hundreds of bands but only ten musicians.” If that’s true, do you all have a lot of side projects?

KJS: Yes, music is what I’m doing for a living right now. In addition to Feufollet, I’ve got another trio I play with a lot called T’Monde. Also I play a lot with Joel [Savoy, her husband] and this accordion player Jesse Lége, and I do random gigs playing country music.

CS: I play in Feufollet, and then I have a couple of other bands that I’m in. There’s one called The Viatones. It’s Sixties-informed rock & roll and pop. We’re kind of trying to be the Beatles. My friend Blayze Viator writes all the songs. Also with him I have this other group, Blayze & Saddles, where we do honky-tonk and country music, more in the vein of Buck Owens and the Bakersfield Sound. I used to be in six bands, but now it’s down to three main ones. I have a recording studio, too: Staffland. That’s my job in addition to the band.

Can you speak to any other influences while you were making this album?

CS: In my songwriting I always just want to write songs like Bob Dylan.

CS: A lot of my songs on the album were songs I had written a long time ago, when I was in my twenties. Also, Kelli has so many good songs—a lot more songs in her catalogue than I had—and we thought it would be awesome to do all those. Her joining opened the door to let all the stuff that I had brewing come to the forefront. Really, the whole inspiration for the album is Kelli joining the band. This is our new offering and direction: my songs and her songs, my voice and her voice. A collaboration.

Two Universes is out nationwide on March 24. Pre-order it here.

Sarah Ligon is a writer and editor based in Oxford, Mississippi.