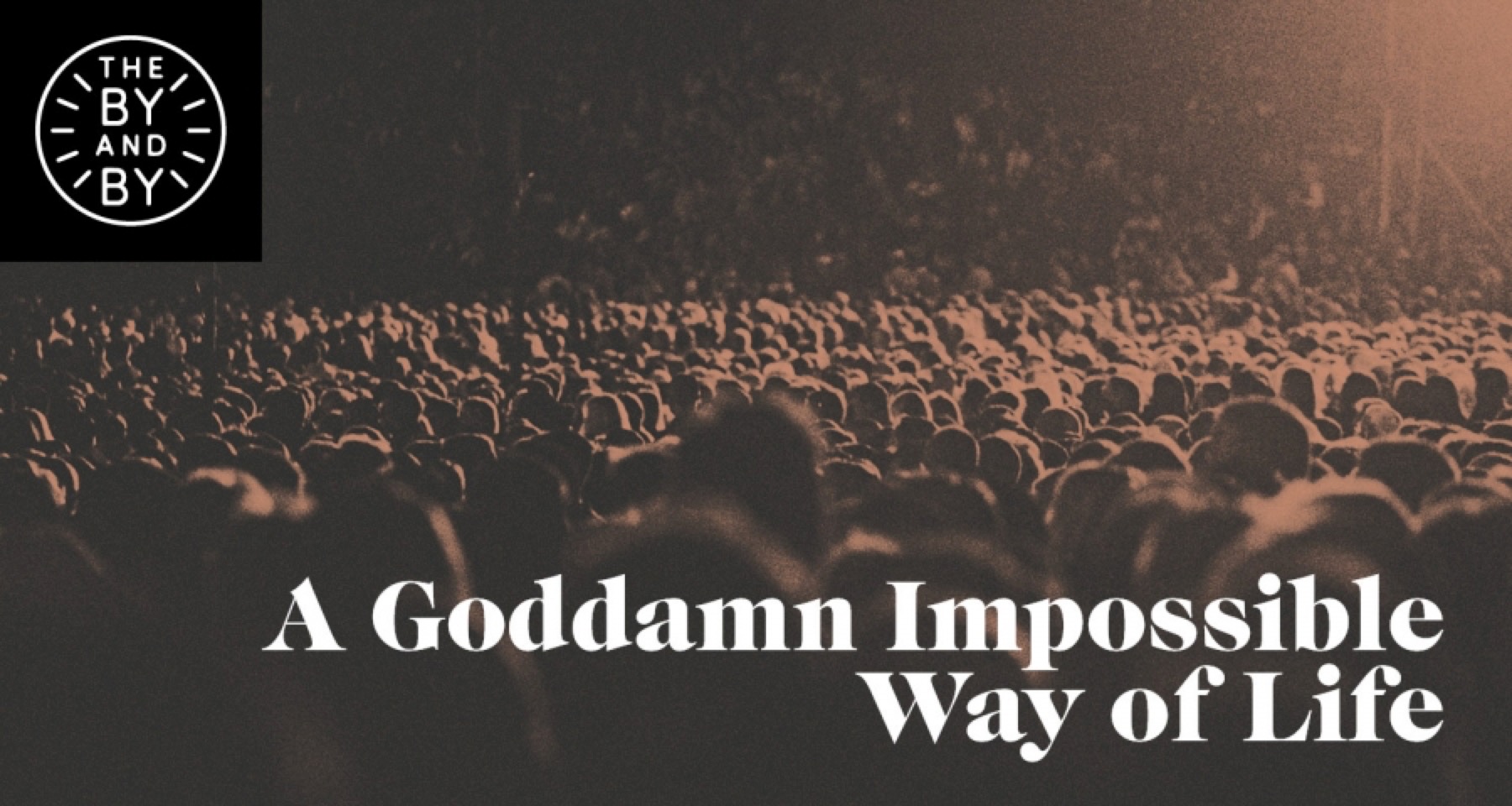 A NIGHT WITH LOU REED

Forty-two minutes northeast of Lou Reed’s hometown of Freeport, New York, I am in my childhood bedroom, curiously absorbing a videotape I narrowly understand at about thirteen years old. I had heard from a camp friend that Lou was like Bowie and Bowie was like Rocky Horror, and that got my attention. Now a man who looks to be my father’s age is onstage playing songs I’ve never heard alongside another man who looks like my balding uncle. It doesn’t sound like Rocky Horror, but it doesn’t sound bad.

I rented A Night with Lou Reed from the local video store, which happened to be carrying the VHS version of a concert that was filmed in 1983 but unaccountably first made publicly available in 1991. The reasons behind the eight-year lag time between its filming and release are inscrutable. A cursory effort at researching this quickly feels insane and is abandoned.

In Northport, our small house is teeming with strange, adolescent energy. Down the hall my older brother is unknowable, with his heavy metal records I want to understand but, to be candid, scare me. In Northport, we aren’t too far past the Ricky Kasso situation. “Say you love Satan.” Look it up if you don’t know about it. Kasso’s life was not saved by rock and roll.

As for the movie I’m watching, I came to adore it more than I ever expected to. It sent me down a Lou Reed rabbit hole. Transformer and Mick Ronson led to Bolan and Mott and then to glam writ large. For a theater kid with a nascent interest in songwriting, the serotonin fireworks are nearly impossible to describe. And it was the first time I ever heard Quine.

Downstairs, my parents marvel at their antisocial children. Are they okay? What do they do up there all day?

Three decades later, I don’t believe I could explain.

Try to conjure him, if you can. Not Lou Reed: genius, pansexual, drug daredevil, leather-clad avatar of the avant-garde. Try to conjure Lewis Allen Reed: the fragile, panicky accountant's son growing up in the leafy suburb of Freeport, Long Island. Think of his parents, Toby and Sidney Reed (née Rabinowitz), Brooklynite refugees of the Depression, fleeing to the suburbs in 1952 to raise their two children under less chaotic circumstances.

They are doting and well-intentioned, but scared and baffled by the increasingly erratic behavior of their teenaged male offspring. By the late 1950’s, he is by turns ornery and introverted, painfully shy and deliberately menacing. This is a different sort of chaos, more frightening for being so unfamiliar, so inexplicable. His high school years were hell. An emotional war zone driven by his boundless rage. The unbearable anxiety, the antisocial behavior, the drug use, the promiscuity. What was happening? What could they do? What would you do? Wouldn’t you try anything?

Now imagine: A visit to see Lou during his freshman year at NYU. A nerve-jangling drive into the city. North on the Meadowbrook, west on the LIE, through the Midtown Tunnel, and miserable traffic all the way across and down town.

Lou is unwell. No, that’s an understatement. Lou is catatonic, unreachable. When they whisk him back to Long Island, they are beyond panicked. His younger sister is terrified to see him in such a state. For the first time, though not the last, it seems they might really be losing him. Wouldn’t you try anything?

Nineteen eighty-three and, improbably, Lou Reed is still breathing. Newly sober and newly in his forties, he has already used eight of his nine lives. He stands defiant if slightly shaky in front of an expectant hometown audience. After the oceans of booze and the jet hangars of speed and the time he shot a vein in his neck and coughed up a Quaalude—after all of that—this would be his life now. He would do the things he has done before “unaided,” as it were. His band crashes into the last song before the encore and this is what he sings: “All your two-bit psychiatrists are giving you electroshock / They say, they let you live at home, with mom and dad / Instead of a mental hospital.”

It is said that Lou never forgave his parents for the shock treatments. It is said they felt that guilt until the day they died. But family is family and this family never fully fractured. And whatever his resentment—his fathomless rage—he depended on them.

After his very last gig with the Velvets—after Warhol and Nico and the groundbreaking albums and the embrace of Manhattan’s endless white light and white heat—it’s said his parents were parked outside waiting to take him home to Long Island. He had no money and few prospects. He went to work in his father’s accounting business. Toby and Sidney saved Lewis so many times.

What do songs like “White Light/White Heat” and “I’m Waiting for the Man” mean to someone who has just surrendered a junkie’s life? What does it mean to a bandmate who hasn’t? Press play on A Night with Lou Reed and not far in it’s obvious from the camera placement and dueling guitars that we are essentially watching a buddy comedy. Lou, ludicrous in trademark leather, trading licks with bald Robert Quine. Quine, a post-punk Hendrix, sublime in the Voidoids or alongside John Zorn or Tom Waits. Always, the hairline receding. An unlikely look for such a visionary performer. Tonight he is a gale force of nature.

Opening chestnut “Sweet Jane” is anarchic and joyous, invigorating an old standard with weird, new life. Quine’s playing on the calloused deep cut “Martial Law” is so richly abrasive that it nearly transforms a fairly characteristic acid-blues nightmare into something approaching a crowd-pleaser. It sounds like hyperbole to ascribe to Robert Quine an entirely new and separate vernacular on the guitar. But who else is doing anything like this?

Inevitably, it’s tense. Lou plays a recent song called “Women,” not especially tuneful. Warhol’s in the audience, all knitted brows and archly disapproving eye rolls. Quine solos, turning his amp up to punishing levels. Lou and Quine trade blows on guitar, and the anger is real and palpable.

Lou who must collaborate, but loathes his collaborators. Lou who jettisoned Warhol, Cale, and Bowie, all for getting too much attention. Soon this association with Quine will become unworkable.

Later on, Lou would play shows where he swore off the drug stuff. No “Heroin,” no “Street Hassle,” no “Sister Ray.” To truly recover, you must create a new environment, a clean break. But that takes time. So tonight, at the Bottom Line, Lou’s sober and Quine’s not, and when the lyric comes “First you gotta sniff it / cause you got no time to waste” they both lean in hard. Genius and protégé. You’re gonna kill your sons.

Part 5: If You Need Someone to Kill, I’m a Man Without a Will

To play with Lou was Quine’s lifelong dream, finally realized on The Blue Mask, the 1982 classic that once again breathed oxygen into Reed’s flickering legend. Such a brilliant record. Such astonishing playing.

For Lou, a final reckoning with addiction. One last chance to save himself. From “Underneath the Bottle,” a remembrance of things trashed: “Things are never good, things go from bad to weird / Hey gimme another scotch with my beer.” From “Waves of Fear,” a withdrawal song that makes Lennon’s “Cold Turkey” sound like a spa day:

Waves of fear, pulsing with death
I curse my tremors, I jump at my own step
I cringe at my terror, I hate my own smell
I know where I must be, I must be in hell.

For Quine, a chance to showcase his wares alongside his hero. A signal moment in the lifetime of an underground legend. But a brief accommodation, as it transpires. A weird animating moment in their estrangement: when Quine’s dear, miserable friend Lester Bangs dies of an overdose, Quine is devastated. Lou hated Bangs and told him as much. Those two had had their moments.

To Quine, for Lou to be so cruelly dismissive of this loss, is a wretchedness unforgivable. He told others that his friendship with Lou ended with Lester’s death. A musical excommunication followed. Lou buried Quine’s guitar in the mix of his follow-up Legendary Hearts and soon the relationship was intermittent and then over.

On A Night with Lou Reed, the performance of “Waves of Fear” is incredible.

“I cringe at my terror. I must be in hell”

Part 6: A Toast to Everything That Doesn’t Move

A Night with Lou Reed begins with a portentous deep-throated voice-over, collaged against de rigueur shots of decrepit Manhattan. “Lou Reed came from these streets, when rock music was in euphoria over love and peace . . . Lou Reed’s terrain was the hard and raw city . . .”

But he didn’t, and it wasn’t. Not really anyway.

Born in Akron in 1942, Robert Quine acquired a law degree from Washington University in St. Louis. But the law didn’t call. He died in 2004, some kind of convoluted strung-out junkie suicide. He was not an easy man. Some friends would say it was inevitable, and maybe it was, but you can’t say his life was saved by rock and roll.

In some ways, Lou just kept getting better. New Sensations was great, New York was a masterpiece. A second marriage failed, but a third to Laurie Anderson stuck and he lived on for decades as the imperial cultural eminence he was born to be. Toby Reed died the same year as her son, in 2013.

You can see most or all of A Night with Lou Reed on YouTube now, but some of those clips have edited out his between-song banter, so you can’t hear his deadpan—and flawed—paraphrasing of Clint Eastwood’s sadistic Dirty Harry: “Do you know what this is, punk? It’s a .45 magnum, the biggest handgun in the world. Now I know what you're thinking: You’re thinking, ‘Did he fire five shots or six?’ You feel lucky, punk?”

Special thanks for background information is due to Anthony DeCurtis’s extraordinary 2017 biography, Lou Reed: A Life, as well as this moving essay written by Lou Reed’s sister in 2015. Also, thanks to Paranoid Style lead guitarist Bruce Bennett for sharing recollections of his personal relationship with Robert Quine.

“A Goddamn Impossible Way of Life” is part of our weekly story series, The By and By.

Elizabeth Nelson is singer-songwriter for the Washington, D.C.-based garage-punk band the Paranoid Style, a civil servant in the field of education policy, and a regular contributor to the Ringer, the Oxford American, the New York Times Magazine, and Pitchfork, among others. In 2020 Spin magazine ranked the Paranoid Style the twenty-seventh best rock & roll band currently working, thereby adding twenty-six names to her renowned Enemies List.