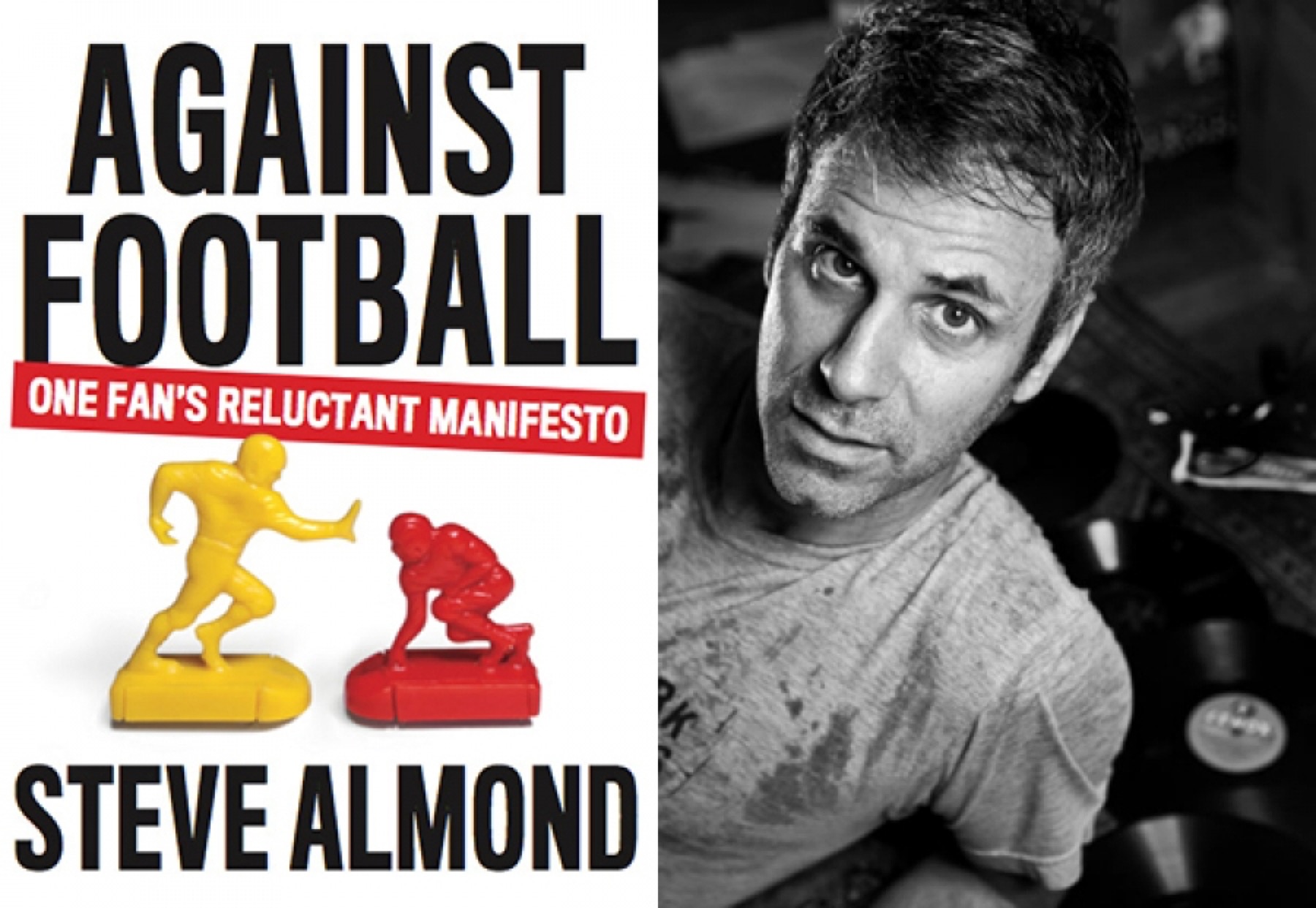 In 1897, the New York Times inveighed against what it called “Two Curable Evils.” Evil One was lynching. Evil Two? Football. A few weeks earlier, on October 30, a fullback for the University of Georgia named Richard Von Albade Gammon had tried to tackle University of Virginia halfback Julien Hill. “Von,” as he was known, missed and fell hard, chin-first. He died of massive head trauma later that night.

It didn’t take long after the Princeton-Rutgers game of 1869 (the first officially-recognized American football game) for football to develop a reputation for extensive maiming and mutilation. At the 1894 Harvard-Yale contest, one of the Sons of Eli broke a Crimson player’s nose during an officials’ conference. During that same contest, there was at least one broken leg, a couple of shattered collarbones, and four or five cracked skulls. Two players were thrown out for unnecessary violence; five went to the hospital. Hardly surprising, given that, at the time, the game was an unholy hybrid of rugby and riot, with minimal rules and no helmets.

For decades after Gammon’s death, Americans debated: was football “murder and mayhem” as the New York Times charged, or was it an example of what President Theodore Roosevelt approvingly called a “rough, manly sport”? Not that young Gammon was the only fatality: around the turn of the twentieth century, dozens of boys (and at least one girl) died playing the game. Hundreds suffered catastrophic injuries: snapped spines, broken limbs, gouged eyes, cracked ribs, perforated lungs, and concussions. Lots and lots of concussions. Things were so bad in the 1909 season (26 dead, 500-odd seriously injured) that John Singleton Mosby, a Confederate guerilla fighter, delivered a diatribe against football, calling it a “barbarous amusement.” The old colonel was no wuss: as a student at the University of Virginia in 1850, he had shot a classmate who riled him, and during the Late Unpleasantness, he’d summarily executed Union prisoners of war (to be fair, George Custer did it first). But the death of halfback Archer Christian from a cerebral hemorrhage he’d received in the Cavaliers’ game against Georgetown was too far for Mosby: “Cock-fighting is unlawful in Virginia: Why should better care be taken of a game chicken than a school boy?”

Steve Almond’s new book, Against Football, asks essentially the same question—minus the part about the chicken. How is it that a game which “in its exalted moments, is not just a sport, but a lovely and intricate form of art” also legitimizes, as he says, “a tolerance for violence, greed, racism, and homophobia”? And “what does it mean that the most popular and unifying form of entertainment in America circa 2014 features giant muscled men, mostly African American, engaged in a sport which causes many of them to suffer brain damage?”

Almond is one of the sharpest, wiliest, funniest essayists in America. He’s also a life-long Oakland Raiders fan. When he got to thinking about football, he could come to only one conclusion, that he must abjure the gridiron realm: stop enabling NFL owners who reap obscene profits from the labor—yes, very well-paid labor—of players who destroy their bodies and minds for our “entertainment.” Same goes for NCAA football, which, after the recent court decision to allow colleges to rake in money from football but bar the players—many of whom are from extremely deprived backgrounds—from earning a penny from these new profits, cast deserved scorn on the NCAA’s convenient definition of “amateurism.” Almond thinks we should stop watching football.

The author is not self-righteous and prissy about this conclusion, though he is pained, conflicted, and filled with regret. It’s hard to argue with his characterization of the NFL as a cartel whose “true economic function is to channel our desire for athletic heroism into an engine of nihilistic greed.” It’s hard to argue against the science showing that depression, early dementia, and chronic traumatic encephalopathy occur more often in ball players than in the general population, and that while white men live, on average, to seventy-eight, and African American men to seventy, life expectancy for a professional football player is mid-to-late-fifties.

It’s hard to argue with Almond’s facts, so sports fans are yelling at him instead. When he published an excerpt from his book in January in the New York Times Magazine about the morality of watching the Super Bowl, almighty hissy fits were pitched. The football faithful cast loud doubt on Almond’s intellect, his nationality, his sexuality, and his anatomy. He was called “unpatriotic,” a “fascist,” and a “socialist.” Many accused him of having a “large vagina.” Almond, the son of two psychoanalysts, ventured a diagnosis of his critics: “It’s hard to ignore that a large vagina suggests an unconscious fear of male inadequacy. Is it possible that merely asking these guys to examine their motives for watching football made them feel small?”

This is both a splendidly snarky and accurate illustration of how we’ve knotted football, virility, and nationhood together so tightly that a critique of one becomes an attack on America itself. Almond slices merrily through the tangle of conflicted manliness, deconstructing the equivalence of brutality and heterosexuality. He recounts the time he watched a game with an Italian lady (upon whom he had ungentlemanly designs) who was “studying medieval gender roles.” She was struck by all the butt slapping:

“But look. Before each time, the skinny one, the sex leader—”

“He makes all the big boys bend over. Then he chooses his favorite and comes up behind the lucky one and makes a pantomime of sodomy.”

Football has always been about masculinity—officially heterosexual masculinity—though the coming-out of star players Michael Sam (Missouri) and Chip Sarafin (Arizona State) should complicate things in a productive way. Still, we’ve long cleaved to the idea that toughness and straightness—sexual and ethical—go together. In 1905, during one of the periodic outcries for banning football, Teddy Roosevelt held a “Football Summit” at the White House, inviting the coaches from Yale, Harvard, and Princeton to come up with rule changes (the forward pass, the neutral zone, and a penalty for “unsportsmanlike conduct”) to tamp down criticism of the game. Roosevelt worried that the country was going “soft.” Football prepared boys for war—it is, after all, a game about taking enemy territory. We needed football to create a generation of muscled, power-minded American men to match and eventually outstrip the British Empire, whose tradition of rugged sports—especially rugby—Roosevelt admired.

These days football gives tribute to war and vice versa. No wonder so many modern games feature color guards, band salutes “to the troops” and F-22 flyovers. On this note, Almond quotes George Orwell: “Serious sport has nothing to do with fair play. It is bound up with hatred, jealousy, boastfulness, disregard of all rules and sadistic pleasure in violence. In other words, it is war without shooting.”

Football fetishizes war. And race? The distinguished historian (and one-time star Georgia high school linebacker) Taylor Branch suggested in 2011 that college ball carries with it an “unmistakable whiff of the plantation.” Almond scents that same odor in professional football: “Can anyone really watch the NFL Combine—in which young, mostly African American men are made to run and jump and lift weights for the benefit of mostly old white coaches and us couch potatoes—and not see visual echoes of the slave auction?”

No wonder Almond’s getting lambasted. He pushes all our hottest buttons in Against Football, he’s unapologetic about his “obnoxious opinions” and uncomfortable questions, he hits us where we’re most tender. It may be that when it comes to football, America is like St. Augustine, who, in his Confessions, asks God to make him chaste, just not quite yet. We know about the concussions, the racism, the money, the deranged version of masculinity infecting football; we know it’s going to have to change. Just not yet, not this season.

Diane Roberts’s most recent book is Tribal: College Football and the Secret Heart of America. She lives in Tallahassee and is currently at work on a series of essays on white women.