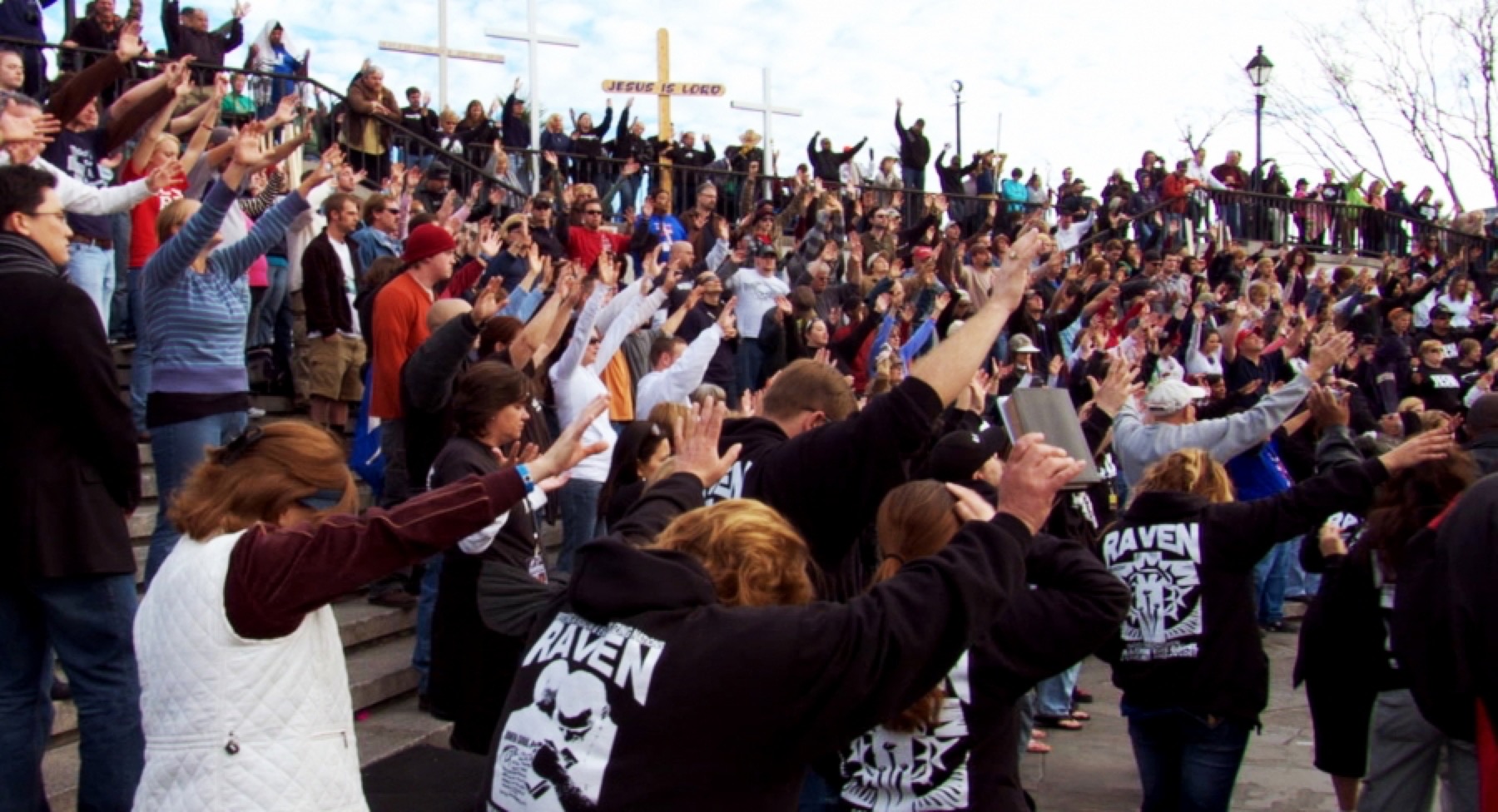 Fundamentalist Christianity has long been a powerful force in American culture and politics—and a subject of fascination. Who are these people who believe the End Times and Rapture are coming? How might their voting and donating power shape the United States? And is it possible to discuss their beliefs without descending into caricature?

Filmmaker Holly Hardman was among the curious. In 2005, she began shooting interviews with born-again Christians she had met in Manhattan—and then Hurricane Katrina hit the Gulf Coast. She and other residents of her Massachusetts hamlet gathered supplies to send to the storm-ravaged region, and she realized the people in Louisiana with whom she was coordinating were organized through Evangelical churches. She began to ask questions, and their responses fascinated her. Many believed Katrina, Rita, and other destructive hurricanes were preambles to the Rapture, “birth pangs” that would precede the coming End Times. The focus of her film, which she had originally conceived as broad and politically oriented, shifted immediately to how Apocalyptic Christian beliefs played out in the context of the battered Gulf Coast.

The finished documentary, Good People Go To Hell, Saved People Go To Heaven, will have its New Orleans premiere on Sunday, March 1. The title comes from a quote by Stephen Tavani, the organizer of WOW JAM—a roving Evangelical event featuring live music, free haircuts and manicures, pie-eating contests, giveaways, and other activities designed to attract “desperate, hopeless people” so he can preach to them. In the film, he’s on stage at a WOW JAM in a park a few blocks from one of New Orleans’ largest public housing developments. He begins by addressing the crowd: “There’s a lot of good people here,” he says. “But do you know where good people go?”

The notion that anyone who does not adhere to Evangelical Christianity’s strictures will burn in hell repeats throughout the film in a series of intimate interviews Hardman conducts with an array of Louisiana believers. (The doomed include gay people, Muslims, and birth control users, along with anyone who has not accepted Jesus into his or her heart via a born-again experience—including Hardman, who’s Episcopalian.)

One might expect a documentarian of Hardman’s New England ilk to produce a hatchet job on a liberal’s idea of backwards kooks—this might be true if she were not such a thoughtful, evenhanded, clearly empathetic filmmaker. Good People is not uncritical, but it’s also not a polemic. The story unfolds as a delicately probed and fairly portrayed panorama of people and belief that is both touching, at times, and terrifying.

I spoke to Hardman on the phone from New Orleans on the day after Mardi Gras, when the city was filled with drunken swarms of revelers and, among them, Evangelicals holding signs and crosses warning sinners of what awaits them.

It seems as though it would have been easy to caricaturize many of the people in this film, to cut their interviews so they reaffirm the stereotypes often associated with fundamentalist Christians. But instead, you’ve given the main subjects space to really explain their beliefs and how those beliefs shape their lives and families.

I worked with a few editors before I found the best fit for the film as I visualized it. I started working with somebody whose opinion was basically: These are nice people, but they do very bad things, and that’s what we have to show. But that wasn’t what I wanted to do—I didn’t want to mis-portray them. I didn’t want to have an agenda. I wanted to be very honest about what this belief system is—not from the subjects’ point of view, necessarily, but from within the context of their world.

I was fortunate to find Cam Clendaniel to edit with. We shared a similar point of view. When someone said something provocative that we wanted to include, we always tried to give the subject the opportunity to offer counterpoint. If we couldn’t do that, we wouldn’t use the footage.

There was something I was so tempted to use about one of the teenage boys having very anti-gay beliefs. They were so extreme that his classmates would tease him and, according to one of his teachers, they even had a rather colorful nickname for him. I really wanted to talk to him about that, but I wasn’t able to arrange another interview with him, so I didn’t feel right including that anecdote.

You’ve said you began this project because you were interested in Evangelical Christianity’s influence on politics, but the only time the documentary shows a politician is the shot of former New Orleans Mayor Ray Nagin’s talk at a pastor’s conference. There are many Louisiana politicians who are far more involved in that world than Nagin. Why show him?

Nagin’s not even Evangelical. He’s Catholic. I don’t know how much of a practicing Catholic he is, at that. My filmmaking credo was to keep the stories we followed as organic as possible. We were following Pastor Cornelius Tilton, who was very active in the organization of the Thanksgiving Day rally in the Superdome where Nagin speaks. If one of the main characters had met or worked with another politician, we would have tried to film it. If I had covered more of Pastor Dennis Watson, from Celebration Church, we would have probably had access to Bobby Jindal, because that’s the church Jindal goes to when he’s in New Orleans.

The reason I didn’t pursue the Pastor Dennis story further is because I found him to be much like all the mega church pastors that we encountered in our five years of filming—their conversation tended to come across as packaged and rehearsed. I always felt as though they were giving a performance. And I had a different goal. I wanted to explore the everyday people, the grassroots—the flock, if you will—and understand why they believe in the End Times. I felt I was exploring the Evangelical constituency—the people who vote for right-wing politicians. I find it funny that so many of those politicians claim to be Christian, whether they fit the Evangelical profile or not. It seems to work, unfortunately.

Several people who appear in the film describe having trouble with drugs or alcohol before becoming saved. Was that a trend you saw?

People who are first-generation born-agains—who came to the church without having grown up in it—almost without exception had some sort of drug addiction or alcoholism or serious illness in their background. They came to the church through suffering. Lance, who now travels the country in his motor home evangelizing, had been in trouble with the law, using alcohol, drugs—he was living a sort of biker life. He had his born-again experience in a motel room. He tells it often: A page from the Bible fell open onto his lap, he found Jesus, and never went back.

We heard these stories over and over again. The pastor at Celebration Church had his born-again experience in the shower. He told me he had been a drug dealer, and he said he fell down to his knees in the shower praying, and that was it. He found Jesus. Mitsi, who has raised her six sons in Evangelical churches, spoke of drinking a lot when she was younger, and she suggested there were drugs, too. She also had medical issues. Mitsi’s first real introduction to fundamentalism was in the hospital—nurses who were treating her started evangelizing to her.

The second generation’s introduction to the church tends to be more of a community-culture experience within a family or a church that they grow up in. But Mitsi, for instance, didn’t consider her children Christians until they also became born again. They had to have a born-again experience to be true Christians. She spoke about her son Aaron having a born-again experience when he was four years old. He seemed to support that when he talked about himself—his story about himself is very similar to his mother’s version. Much of Mitsi’s children’s upbringing seemed to be a kind of religious indoctrination.

There are some chilling moments in the film—the WOW JAM footage, and the part when the young woman at the disaster relief center says she thinks it’s neat that “Katrina” means “cleansing” in Latin because the storm was God’s way of cleaning out the city. But you don’t portray Evangelicals as bad people. Were there any points during the making of the film in which you felt uplifted and heartened by what you saw?

Some of the most wonderful experiences we had while filming were the times we witnessed the palpable joy that people clearly experienced in their churches. We met people who had come from great suffering in their past, and who had been able to find these communities of loving people. Maybe that is humanity at its best. They felt love, compassion— but there is a caveat: You have to go along with the Evangelical prescription for a good Christian life. That means you can’t be gay, you can’t have an abortion. Maybe you can’t kill? I always get it mixed up—like, what are the real sins here? Ultimately, I could not agree with so much of what they were preaching, but there is something wonderful about being in a place where people are experiencing joy together. That was beautiful.

Sunday’s New Orleans premiere is at the Indywood Movie Theater (628 Elysian Fields Avenue) at 7 P.M. The screening will be followed by a panel discussion featuring Hardman, author John M. Barry, and Fari Nzinga, a public policy director at the New Orleans Museum of Art who appears in the film. Pulitzer Prize-winning journalist Jed Horne will moderate the discussion.

Nathan C. Martin is the editor of Room 220: New Orleans Book and Literary News. He is currently at work on a book about Wyoming, his home state.

AMERICAN FACTORY: CAUGHT BY A STORY

If It Keeps On Raining