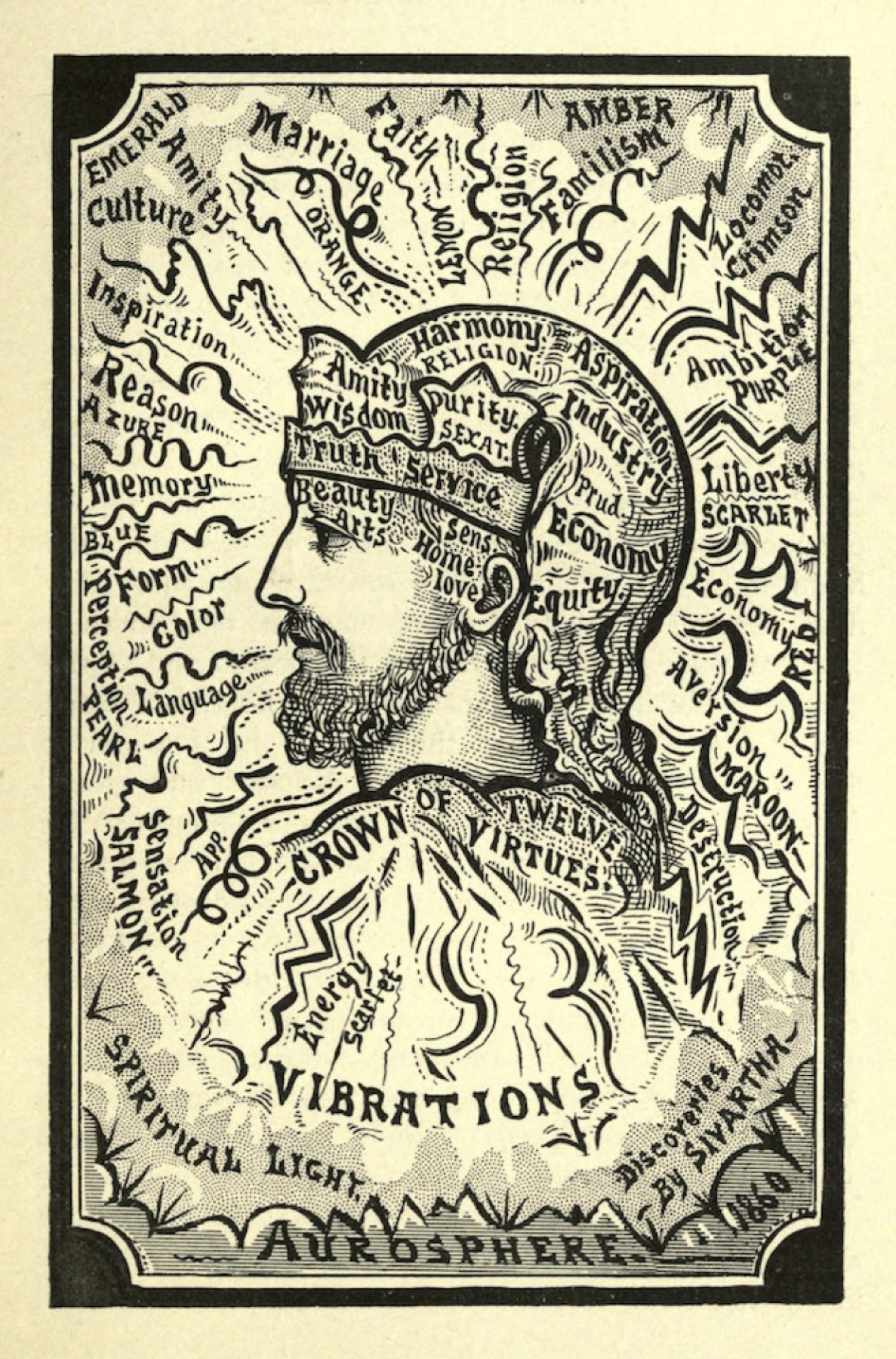 Chart of Vibrations (1898) from The Book of Life: The Spiritual and Physical Constitution of Man by Dr. Alesha Sivartha

Lately, I’ve been obsessed with the country music history podcast Cocaine and Rhinestones. I’ve been obsessed with Bette Davis and Myrna Loy movies. I’ve been obsessed with new albums by Courtney Marie Andrews, Yo La Tengo, Andrew Bryant, and Mount Eerie. I throw this phrase around a lot: I’m obsessed. Obsession, at its core, is about mystery. When I saw Vertigo on the big screen a couple of weeks ago—it’s an all-time favorite of mine, but I hadn’t watched it in a few years—I was struck by how much obsessive behavior is rooted in exploring the unattainable and the unknowable. Puzzling over what makes great art great, or what makes a certain moment in a film or song take over your imagination, isn’t that far removed from any act of detection. For me, obsession with art is also about survival. I’m after the next thing, the next moment that will give shape or purpose to existence. It’s always been important for me to fill my days like this, to give definition to who I am and who I will be by engulfing myself in what I’m watching and listening to and reading. Getting lost in art that moves me just makes things make sense.

Certain perfect moments, particularly in songs, haunt the hell out of me. I play these songs on a loop. I wonder about the making of such moments, sure, and it’s great to read biographies and interviews where artists talk about how exactly things shook out, but my obsessions tend to be about so much more than that; it’s about the imagining, the not knowing. It’s like waking up one day with amnesia and having to piece things together without the proper language. I’m not a musician or songwriter, and perhaps this is why songs hook me most forcefully. I rarely sleep well. I stay up all night, listening to music. Sometimes it’s Nina Simone, and sometimes it’s Johnny Thunders. I’ll get up at five to write, and some song will be at work in me, lighting up my imagination. I have a novel, The Lonely Witness, coming out next month. I remember, as I was working on it early last year, obsessively listening to Cat Power’s The Covers Record, an old college companion. Her version of Mae West and Duke Ellington’s “Troubled Waters” (by way of Michael Hurley) was running through me, was shaping the tone of the bleak, paranoid thriller I was writing. The first third of that song, in particular, had its hooks so deep in me that I couldn’t conceptualize working outside of its influence. I felt sustained, and everything I did felt purposeful. And it stayed that way until something new moved in. Lately, as always, there are a few songs that I keep returning to in this way, that are fueling the work I’m doing now.

The excellent Cocaine and Rhinestones episode on Merle Haggard’s anthem “Okie from Muskogee” got me playing some of my Merle records for the first time in a while. As deep as host Tyler Mahan Coe goes with “Okie”—illuminating its original context and the tight line Haggard was walking between irony and parody and sincerity—it’s songs like “Carolyn” that I get truly hung up on. Written by Tommy Collins, “Carolyn” was the second single from Merle’s 1971 LP Someday We’ll Look Back. There’s a moment in the song, at around the 1:20 mark, where Merle turns things in a dizzying direction, singing, “Yes, Carolyn, a man will do that / sometimes on his own / and sometimes when he’s lonely / I believe a man might do that / sometimes out of spite / but, Carolyn, a man will do that always when he’s treated bad at home.” That thirty second stretch lifts the song to some strange immortal height for me, and I can’t rightly say why. As I said, I’m not a musician or a singer. I can’t name what Merle’s voice does there, or even what the musicians behind him are doing to help carry the song up, but I’ll sit there at the turntable and I’ll keep dropping the needle back on that moment and marveling at it. Isn’t this obsessive act of listening and relistening just a manifestation of love? So, maybe it’s love, after all, that’s guiding such behavior.

Mississippi musician Andrew Bryant’s recent release, Ain’t It Like the Cosmos, has a similar moment. “The Price Was Right,” one of the album’s great heartbreakers, hits its emotional peak at 1:45. “I call my mother,” Bryant sings over Kell Kellum’s ethereal pedal steel floating in the background. “Her name is Paula / She’s having trouble with her mind / We talk about Shiloh / She grew up there / Sometimes I smell her chicken pie.” There’s mournfulness in Bryant’s voice at this moment that hits hard, but there’s also—lyrically—something he does here that I can’t quite put my finger on. I’m pretty sure it’s that Sometimes I smell her chicken pie line that does me in, a sort of synesthetic pathway that lays bare his cross-wired heart. It’s a beautiful, human moment, and it astonishes me every time I hear it, so I go back and back and back again, haunting that thirty second stretch in the song like a ghost. I’m there, lost in the words, childlike in my aliveness, again marveling.

Sharon Van Etten’s 2012 LP Tramp is one of my top three records of the decade and lately it’s been “Ask,” the tenth track, that I keep relentlessly returning to. Really, the whole thing guts me—Van Etten’s voice is like a feeling I don’t know how to name—and I love the album version, I do, but it’s around the 1:40 mark in this live performance of the song that it hits that other level for me. The entire final movement is incredible, but there are about fifty seconds where the song crescendos, Van Etten singing: “Dear I-Need-Someone-Who’s-Lost, / Tell me how not to stop all these tears and fears / So nothing else will drop / So all this pain will stop / But if it hurts too much to ask, if it hurts too much to ask.” There’s a tremble in her voice, a palpable fear that nearly unhinges her (she seems close to losing it at the So all this pain will stop line). An audience member in the front row looks like he’s holding back tears. That’s what the song does to me, too. It makes my insides feel like I’m walking over a rattling cellar grate in an abandoned city. I like getting lost in “Ask,” my head buried in Van Etten’s voice and lyrics, that lilting rise creating an aching in me, transforming all of my hopelessness into a desire to disappear inside such a raw, expressive moment.

Yesterday, I was wrapped up in the contours of a Shangri-Las song, “Out in the Streets.” A few days ago, it was Lucinda Williams’s “Foolishness” from the underrated Down Where the Spirit Meets the Bone (Lucinda’s songs have been go-to points of obsession for me for so long, I can map my life by them). I like the tension of not knowing what it will be tomorrow, and not knowing in which direction it will take the work I’m doing. This novel I’m writing now, I think I have it figured out, but Neko Case’s just-dropped single, “Bad Luck,” which I’ve listened to a couple of times and aim to play on repeat later, might steer me down some unknown road. Ultimately, this brand of obsession is about love and purpose and inspiration. I appreciate the mystery of not knowing how and why certain obsessions take shape. Yearning to connect to art in this way is, in a sense, the most basic human impulse.