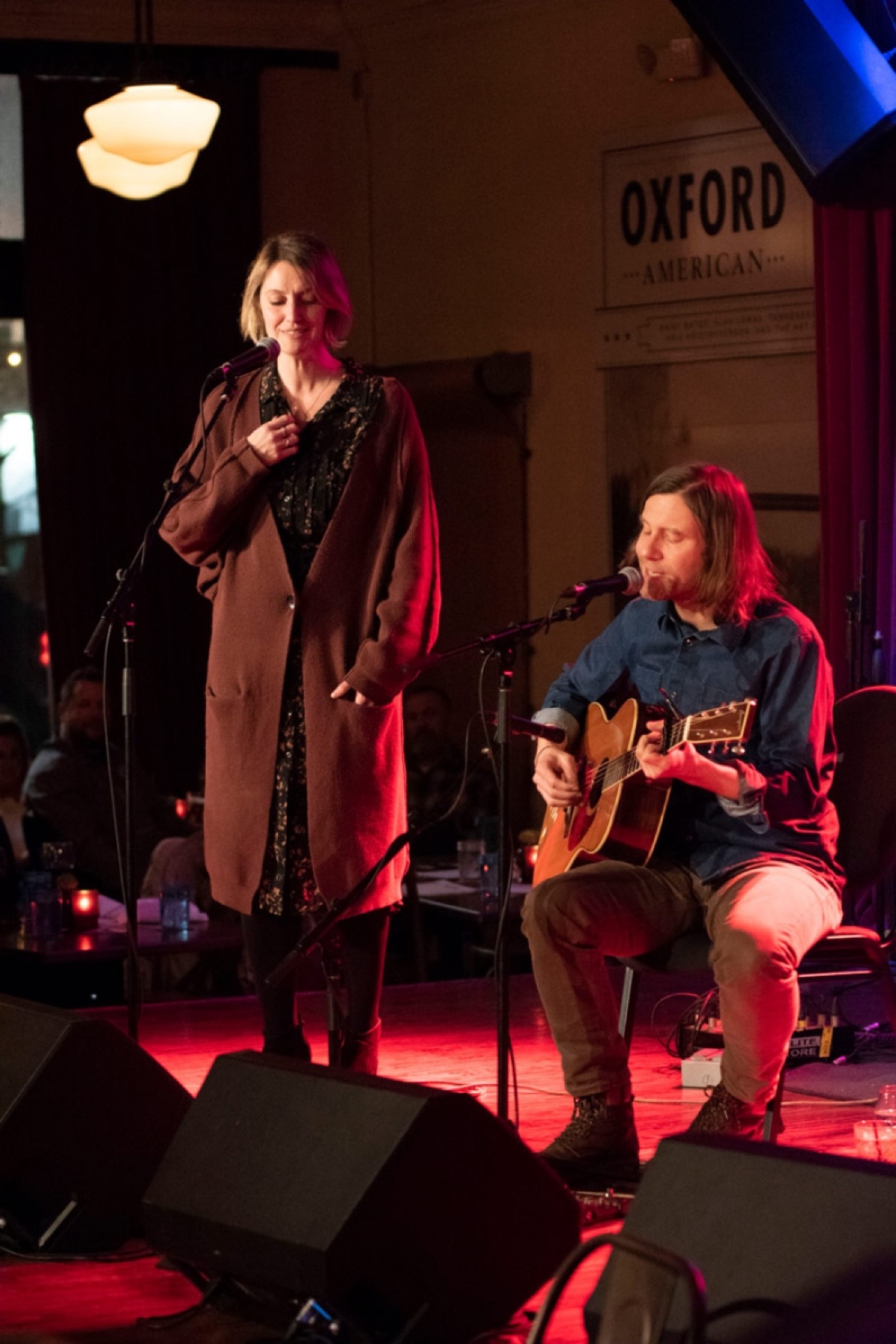 EASY TO COME HOME TO

A Conversation with Joan Shelley and Nathan Salsburg

inger, songwriter, and guitarist Joan Shelley, along with acoustic guitarist Nathan Salsburg, recently drove to Little Rock from her home base in Louisville to perform as a special addition to the Oxford American’s 2018-19 concert series at South on Main. It was a special night for the magazine, welcoming two beloved contributors to our home base. Salsburg, who is also the curator of the Alan Lomax Archive, has written regularly for the OA since 2013—about repatriating fieldwork in the Mississippi Delta, about the prison work songs of J. B. Smith and the oral biography of singer and educator Bessie Jones, and, most recently, about Cas Wallin and balladry tradition of Madison County for last year’s North Carolina Music Issue. Both were collaborators on our 2017 Kentucky Music Issue, which featured Shelley on two songs: her own “By the Ohio” and the Locust Grove Octet’s “Pretty Polly,” a contemporary arrangement of the ballad based on an incomplete 1937 recording of the Pine Mountain Girls Octet of Harlan County.

Shelley and Salsburg began collaborating a little over a decade ago, shortly after they both, separately, returned to their hometown of Louisville, Shelley from Georgia and Salsburg from New York City. Shelley released her self-titled fourth album in 2017; Salsburg released his third solo acoustic album, Third, last year. Before their performance in Little Rock, the duo sat down with the OA to discuss the nature of their collaboration, the evolving music scene in Louisville, and why they say artists no longer have to live in coastal cities to gain a national following.

You’re often labeled as folk musicians. Is that the genre you think best characterizes your work?

JS:
I understand that if you’re a record store, you have to sort things and folk is an easy category for us to fall into. But if you’re a music nerd and a music writer then you would not say folk; folk wouldn’t mean a confessional songwriter, which is what I am. Folk music should be communal, something like, “You guys know this one? Here, sing along.”

NS:
We get “folk” applied a lot, by which I mean the marketing category; the commercial genre. Though I’ve never been satisfied with that used to describe the confessional songwriter or singer: the thing Dylan did, the thing Emmylou Harris did. That tradition, and it’s become one, seems to me to be diametrically opposed to the folk process, the folk tradition, because of its fundamental focus on the individual.

Why did you both decide to return to Louisville instead of, say, Nashville?

NS:
I moved back to Louisville because I wasn’t making music, and I wanted to be, and I didn’t have a space to do it in New York. Not the physical space, not the metaphysical space. I was exhausted, and felt like it was time to rediscover Louisville. Turns out it’s an excellent place to write, play, collaborate—an easy place to get out from and so easy to come home to.

For the first time in a very long time, I feel like things are happening in Louisville involving not just specific neighborhoods, but the whole city. When I was growing up, it was one of the most segregated cities in America and though it’s got a long way to go, it’s changing. There’s cultural and civic engagement and collaboration across communities that were worlds apart in the ‘80s and ‘90s. The city at large is hungry for that change, and it’s exciting to be a part of it and to feel you can make a contribution. It’s important for creative, progressive folks to make their homes and their work in places like Kentucky. I just want to tell people, “Stop moving to Brooklyn. Everyone stop moving to L.A.”

JS:
There’s all kinds of music in Nashville. It’s a music scene. It’s kind of nice to go there because it’s like, “Oh, [musicians] are legitimate members of society.” Whereas in Louisville, it’s kind of like, “Well, what are you doing?” But now that everything can be done remotely . . . I can reach anybody. And when I hear about friends who moved to Brooklyn, and they can barely pay their rent, it’s like, “Why would you do that?” It seems crazy.

NS:
On the Kentucky Music Issue sampler you can hear Freakwater, a band of two wonderful, visionary women who’ve been doing this country-punk thing for many years. The idea behind the name is that there’s something in the water that things a little freaky in Louisville, and it’s true—some really visionary people have come out of this town. And there’s a great sense of pride in that, and a commitment to preserving its continuity.

How did your collaboration begin?

JS:
I was going to all of the shows I could after coming back to Louisville from Georgia, where I went to school. I was [looking] at the music scene again, or for the first time, and I saw a show of Nathan playing with some friends and really liked it, and started talking to them. Then I asked Nathan to play one of my songs when I was recording Gingko and after that he would always be featured on at least one [song per album]. Then I just hit that point of thinking, “We need to do more with less.” I was playing with a big five-piece band and we spent so much time editing things down. I finally said, “Let’s try this the other way. Let’s try to be as small as possible then add to it if something is missing.” That’s when I decided, I’m going to make a record with just Nathan. And that was Over and Even.

How has your collaboration evolved?

JS:
I do all of the writing by myself and then bring it to Nathan if I think it’s a song that he would do well with. He has arrangement suggestions, and we move things around, add chords and things.

But sometimes I like to withhold the songs until we get very near a recording session so they’re kind of raw. [My goal is] to keep it a little bit intimate by being sort of impressionistic—not very well practiced or not very routine. The voice becomes a little rigid once muscle memory teaches you how to sing something, so I like for Nathan and Jim Elkington, who we play with a lot, to not know what is going to happen. It’s a little searching and that’s a big part of the process at this point for me. I like to keep Nathan in the dark sometimes.

How do you feel about where you are in your careers? How are people discovering you?

NS:
There are people in our orbit who’ve said, “Where do you want to take this next? How big do you want to get?” It’s such a foreign, corporate perspective. There’s a phrase I hate just about more than any in our debased contemporary jargon, and it’s when people talk about “growing the business”; using “grow” in that way. Something about it is so robotic and ugly; just vulgar.

JS:
We have friends who have different opinions about how to go about this now with streaming and different ways of putting your music out there. [I keep asking myself,] “What is the gentlest way to get people who resonate with us to access our music and enjoy it in the right way?” I’m not going for mass audience. I just don’t feel like I want to be in everyone’s face because it’s not going to work that way. Did it help you? Cool, take it with you, pass it along.

What is coming up next for both of you?

JS:
We recorded some songs in Iceland recently and took Jim Elkington along. He’s originally from England, lives in Chicago; he’s done a few solo albums and two duo albums with Nathan. They’re just acoustic guitar slayers together so I wanted to take them both, even though I can play guitar and can handle it myself.

NS:
Jim—James Elkington is his stage name—is just an unspeakably gifted multi-instrumentalist who’s played with tons of people on tons of records. He did all of the arrangements on this new Joan record.

JS:
I think it’s hysterical that I keep myself surrounded with essentially acoustic guitar players. We went to Iceland, recorded these songs, and Jim played drums and keys and things like that. That’s coming soon.

NS:
I’ve been working for the past few years on arranging some Hebrew psalms, in Hebrew. I’m not much of a singer, but I’m found the ones I’m drawn to most are basically songs about singing. I grew up Jewish, had a bar mitzvah and all that, and it’s been rewarding to return to it a bit this way. I’ve just started recording, but it’ll be a long-term thing. I don’t know if I have another solo instrumental record in me anytime soon, so I’m enjoying stretching out with this.

Lara Farrar is a journalist and writer who worked as a foreign correspondent in China for nearly a decade and recently returned to her native Arkansas to write about the American South. Her work has appeared in The New York Times, The Wall Street Journal and The Economist, among other publications.

“I’M NO STRANGER TO THE RAIN” BY KEITH WHITLEY

THE BADDEST HILLBILLY IN HOLLYWOOD