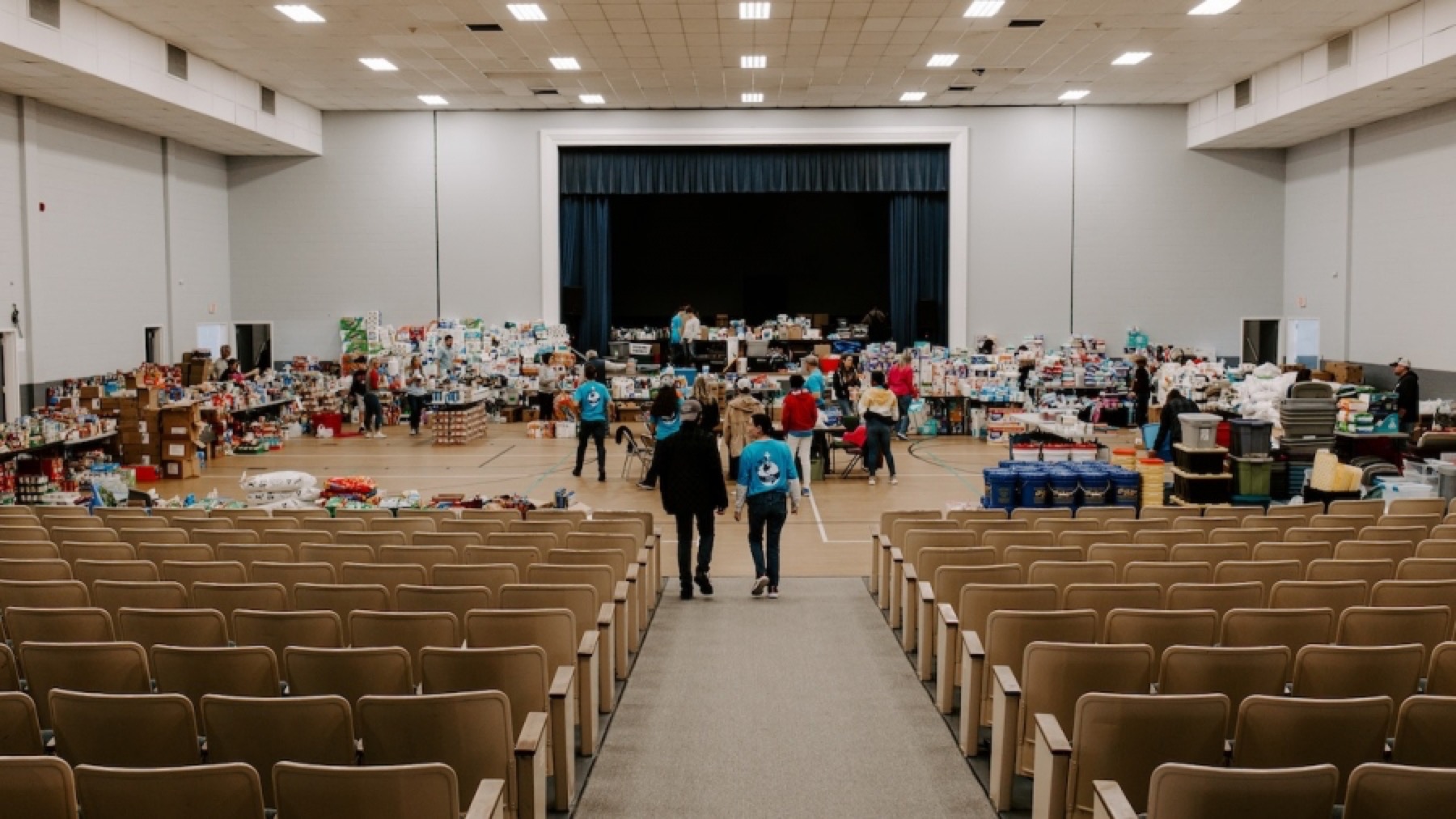 When tornado relief efforts intersect with a global pandemic

After the rain and wind and silence, my friend Kristen asked, “Did it sound like a train?”

We were at our usual lunch place, a Thai restaurant in Cookeville, Tennessee.

I told her the whole story, how I woke at midnight and went downstairs. I’m an English teacher with insomnia, so I sat on the couch grading student quizzes on My Antonia. I read with the TV on low volume, the house quiet around me.

Outside my window came a constant, mechanical sound, like one long beep that doesn’t relent. I knew that a storm, as reported by our local news, was set to hit Kentucky a couple of hours north of us. A hailstorm was projected for our county, and my mother had warned me to park my car in the garage.

Kristen sipped her sweet tea, and as we waited for our curry dishes, I told Kristen that when I heard the siren I got up and went to the window. I expected to see trees bent sideways or the chairs on our porch at least blown askew. But I saw none of that. It looked like any ordinary night. Just a light breeze against the windowpane.

It was after one A.M. by that point.

I went upstairs and roused my mother and my twelve-year-old son, Andrew, from their beds. “Don’t be scared,” I told Andrew as he tottered near the landing of the stairs. “Just go down to the basement.” Wiping sleep from his eyes, he obeyed. My mother is eighty years old and very slow when it comes to climbing and descending stairs. By the time Andrew and I made it to the ground floor, she wasn’t even out of her bedroom yet. I went back to the base of the staircase and looked up for her.  Her toilet flushed upstairs, and I heard water rushing through the pipes in the wall.

When Mama and I finally made it down to the basement, Andrew was standing amidst some boxes piled near the garage door. Mama stopped at the bottom of the basement stairs, a gray blanket around her shoulders, grumbling about how cold our basement is.

“You’re lucky to have a basement,” Kristen said. “Most people in this area don’t.”

It is often windy in our part of middle Tennessee. It’s not uncommon for our heavy porch rugs to be dragged across the floor. I expected to hear our garbage can being hurled off the porch. But I heard nothing, not so much as a gust blowing against the siding or rattling the windowpanes.

I walked halfway up the stairs and listened another minute until the siren stopped.

I tried to remember what they’d taught us in school about natural disasters. Were we supposed to hear wind if a tornado was close by? I remembered waiting out a storm in a public library in Mississippi, how the sky had turned black in early afternoon, and how we’d been instructed to stay away from the windows.

“I think we can go back up now,” I said, moving up the stairs and pausing every few seconds to listen.

They followed me back to the ground floor. “You can sleep,” I told Andrew, who kept yawning, and then I eventually stretched across our couch and stared up at the ceiling.

I felt a little guilty for waking them up in the middle of the night. I was sure I’d overreacted, until the lights went out. The screen on my phone said it was just after two A.M.

Cursing under my breath, I used my cell phone’s light to grope around the kitchen. I found two candles already burned down close to the wicks, one flashlight with a dead battery, and another flashlight that worked. I’m always promising myself that I’ll get better lights, but I never remember until the power is out.

Outside my living room windows, two beams of light moved down the lane toward the cul-de-sac. Two shadows followed the beams. I opened the front door and was surprised to see debris everywhere. I couldn’t see clearly, but I did have my dim flashlight. A shingle from someone’s house had landed on our front porch, and I felt the rough, sandpapery surface of it under my toe. Rain had saturated our floor mat and created dark patches on the concrete slab. The dark shapes of water bottles and small tree branches lay in the yard. My flashlight’s beam found pink and yellow insulation that looked like heaps of cotton candy. Pine needles and small pieces of wood were everywhere. One long stick of wood lay atop the house across the street, where on the porch, a yellow tarp as big as a person rested against the porch rail.

Mama peeked through the mini blinds. “Power will probably be off two or three days,” she predicted.

“School might be closed,” I told Andrew, and he reminded me that it was Election Day anyway.

Behind me, Andrew stood in the doorway, his head swiveling back and forth as he took everything in. Always a quiet boy, he said nothing. 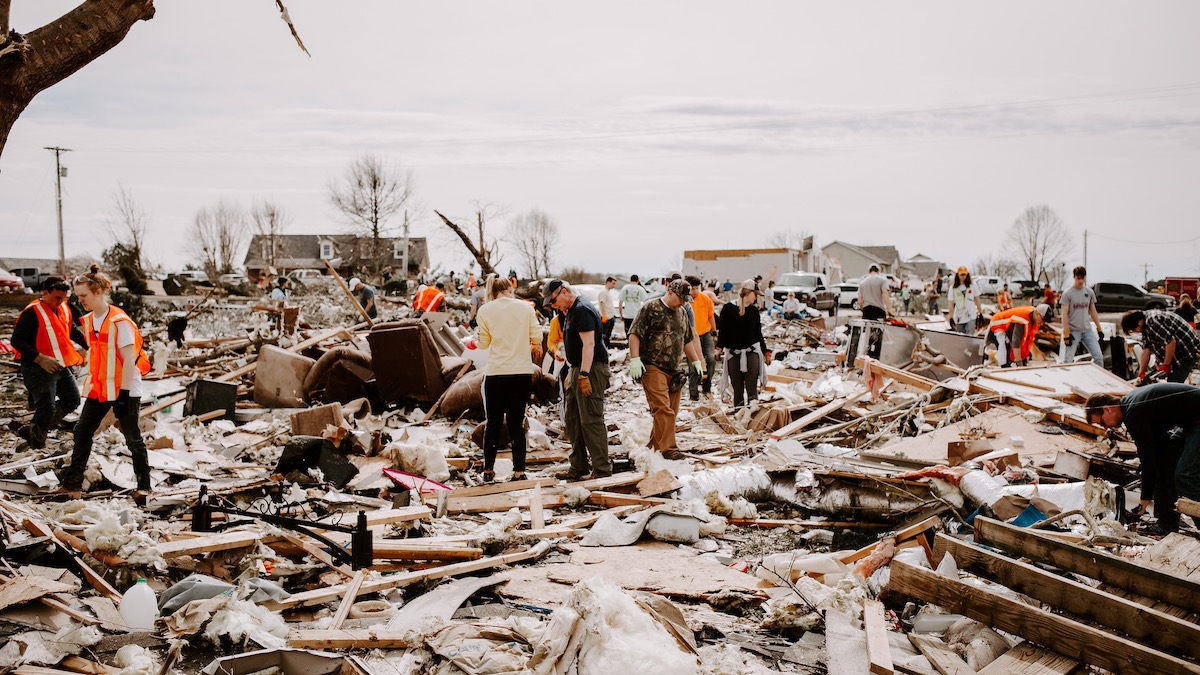 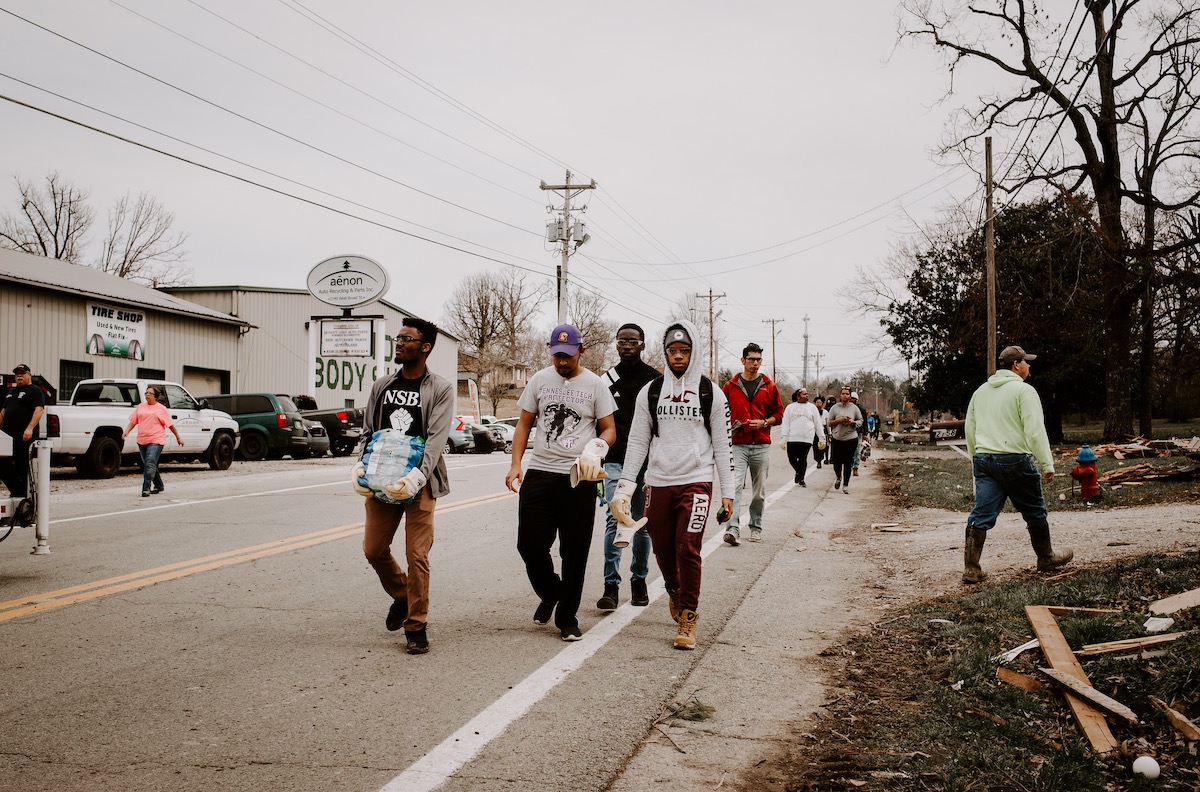 Over the next few days, I learned that at least twenty-four people in our area had died in the storm. Dozens more had lost their homes. I read that the storm dissipated just minutes before it was set to hit Tennessee Tech University, the school where I teach, and where thousands of students live on campus and in the apartments around it. TTU is only two miles from my house, and the school is within walking distance to Cookeville Regional Medical Center. The hospital was also spared, but it would quickly be inundated by more than eighty survivors seeking medical help.

Of all of those impacted, we were very, very lucky. Every home in our neighborhood is intact. We only lost power for a few hours. The closest we came to danger was a cedar tree that was uprooted and landed on its side, its red roots spilling out of the earth, its branches only a whisper from a house in the cul-de-sac.

I’m told that underground is the best place to be during such a storm, and we’re lucky to have a home with a basement. I’m also lucky that I can hear. I live close enough to town to hear sirens, but those who live farther out probably did not receive the warning. Some people who were sleeping or hard of hearing didn’t get a warning at all.

Others in our area fared, much, much worse. A woman across the street from me took in a friend of hers, a woman whose house was carried away. This past week, I’ve seen firsthand how charitable people can be. An office worker at my college lost her home and both she and her husband were injured in the tornado. Within a few days, our office manager raised more than $2,000 for her in donations from those in our building. Last weekend, Tennessee Tech University organized a clean-up effort. People came together and walked these hills, gathering trash. It’s a beautiful effort, but what about the forest behind my house? What about the bits of insulation that hang in the trees, or the Christmas stocking twenty feet up in the air? Who clears that away?

I’ve been a Cookeville resident for two years now. We have beautiful parks and the kinds of hills you see on postcards. On the prettiest of days I used to see deer here. They grazed in the field around the corner from our house. They ate the flora in our backyard. We’ve had one or two sunshine days since the tornado, but I’ve not had a glimpse of our deer.

Despite everyone’s efforts, I fear our neighborhood will never be cleaned up. Last week, I went out to clear away trash pooled up on the hilltop in our backward. I filled a thirty gallon trash bag in just one twenty-minute walk. Still, the next day there was more garbage there. Two dilapidated houses sit on either end of the street leading into our neighborhood. These houses are not condemned, and even before the tornado the owners of the two houses created piles and piles of garbage in their yards and in a gutter by the roadway. Since the tornado, the largest pile has grown and become a thirty foot long trash dump filled with box springs, wood, tin metal, and bags of household trash that smell and seep into the ground when it rains.

Our community is also slower to heal because we’re now coping with the COVID-19 pandemic. As of Friday, local K-12 schools in Putnam County intend to resume classes as usual after this week’s spring break. However, Tennessee Tech has decided to give students a two-week spring break. After the extended break, all classes will switch to an online format, an unprecedented situation entirely caused by the viral outbreak. Students are stressed. They’ve just barely survived a deadly tornado, and less than two weeks later comes an announcement that brings about another large-scale change. Several of my senior students are worried about completing their final projects remotely. The graduation day ceremony and other large gatherings will undoubtedly be canceled, which further distances students from a degree of normalcy and comradery. 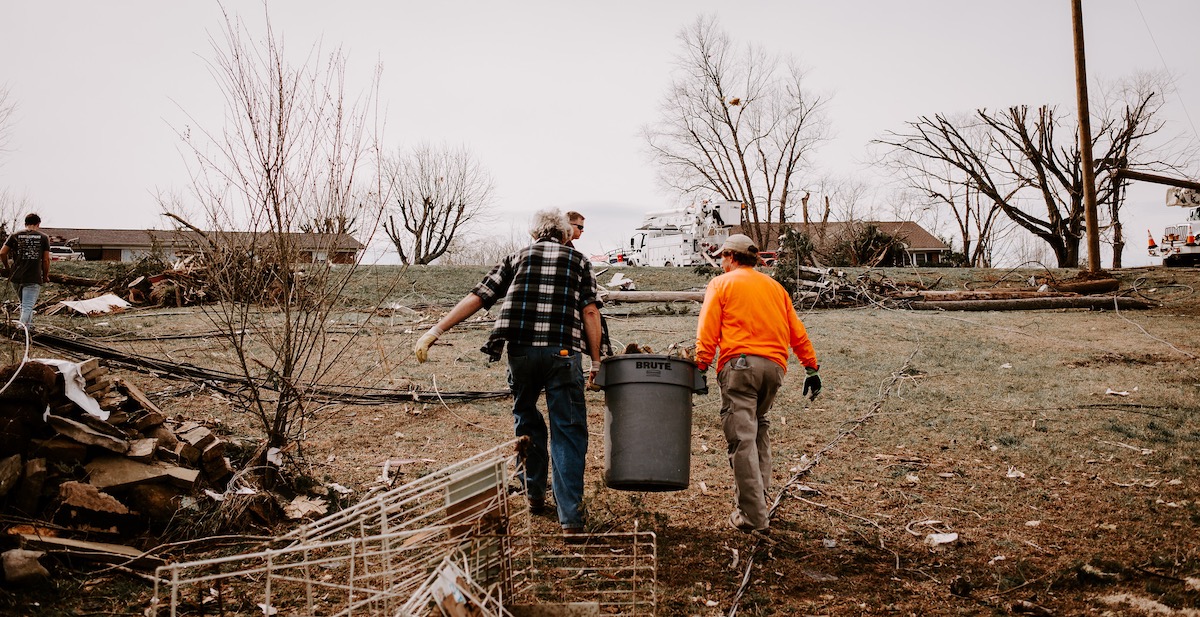 Donald Trump came to our town last week, which drew mixed reactions. In a town like ours, where Confederate flags are plastered to bumper stickers and MAGA support is high, many support POTUS. Others feel Trump didn’t show enough emotion during his visit. When I mentioned Trump’s tour of Cookeville to my mother, she waved off my words like shooing a fly. “He’s just campaigning,” she said. I can’t say I disagree with her, and with all the changes happening in our community right now, a visit from a president doesn’t even feel like major news to me.

For several days after the storm, helicopters droned overhead, hovering above forested areas. I felt secure each time I saw them up there. It was something akin to the feeling I got from finding a photo on my front porch the day after the storm. In the photo a group of three women sit around a table, flowers pinned to their lapels, like they are the family of the bride or older church ladies in the fellowship hall after a worship service. They’re strangers to us, yet their photo has landed on our front porch, one corner of it wedged, almost lovingly, beneath the door mat.

Monic Ductan’s writing has appeared in Southeast Review, Shenandoah, Appalachian Heritage, South Carolina Review, and various other journals. Her essay “Fantasy Worlds” was listed as notable in Best American Essays 2019. She lives in Cookeville, Tennessee, where she teaches literature and creative writing at Tennessee Tech University. Monic is at work on her first novel, a book about a Gullah girl coming of age and leaving her South Carolina sea island.

A New Day for the OA