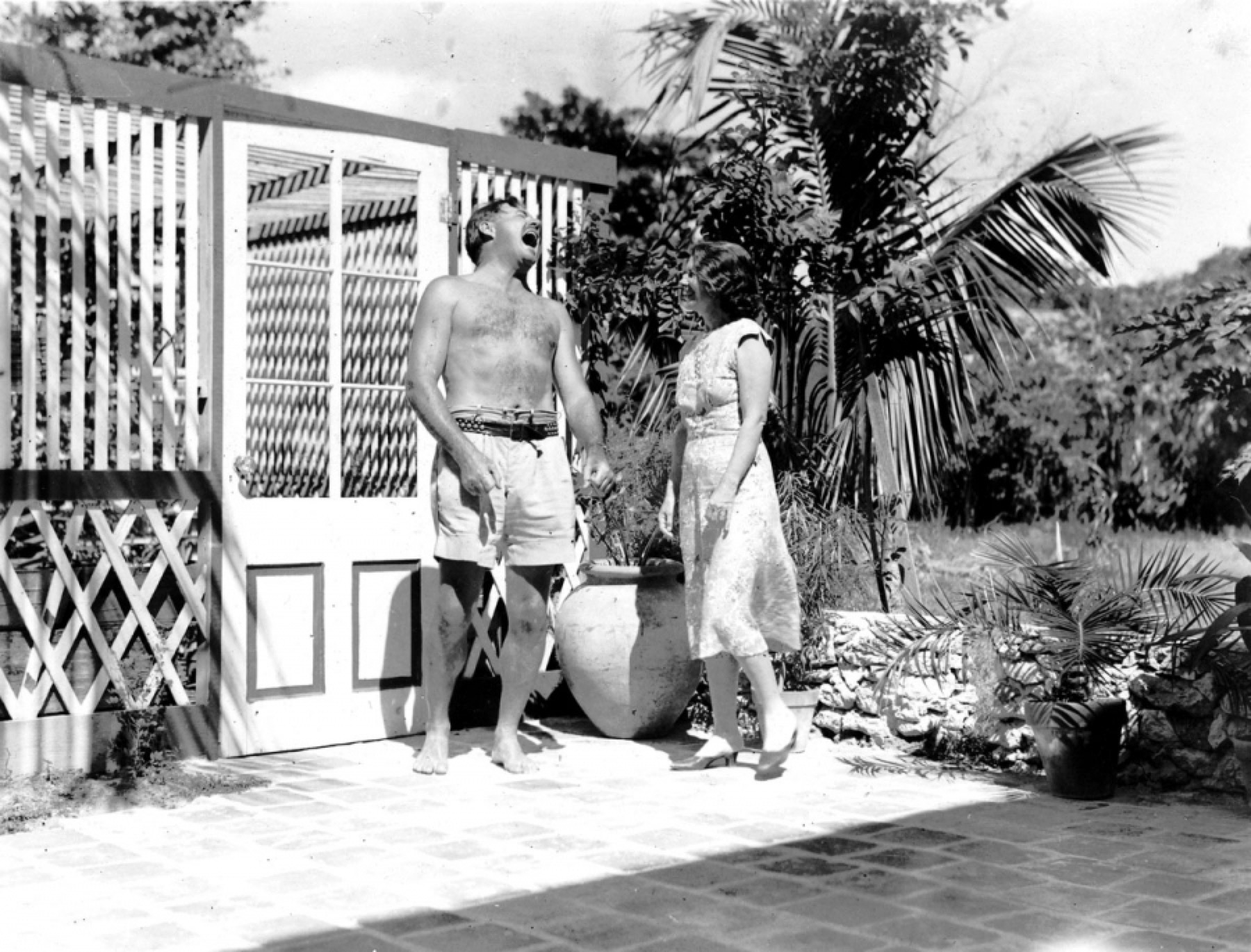 INCIDENT AT THE HEMINGWAY HOUSE

Last summer, I took my two teenage kids down to Florida, to the Keys. When we checked in at the airport in Atlanta, an airline employee made an embarrassing breach of etiquette: eyeing the three of us, our broken little unit, she said, “Are we missing someone?” Experienced with the salty symptoms of having a Perennially Single Pa, my kids quickly explained the situation, but as we walked to the gate, we came up with a plan in case anyone ever asked that stupid question again. First, I’d do my best to appear as though I’m about to cry. My daughter would say, “Momma got taken in the Rapture.” (She didn’t. We’re still good friends.) And my son would then explain our religious affiliations. Ultimately, the questioner would be left with the harshest truth of all: We were the ones left behind.

That’s the kind of vacation we were having. Family antics. A week in the Keys with Nana and my sister, my brother-in-law, a family friend, a nephew, a grandnephew. Late June. Boating in the Atlantic, the sun burning down on an infinite blue horizon. Frozen drinks for survival. You could set your clock by the late-afternoon thunderheads rising up.

All of us were packed into a house on the water on Islamorada, and Nana had to sleep on the bottom bunk. Each morning she conked her head getting up and still every night she refused to take another bed. My brother-in-law, Captain Gary, was in charge of the fishing, and he fought a losing campaign to keep bananas off the boat. (Everyone knows they’re bad luck.) Even a tube of Banana Boat sunscreen, found in the cooler, didn’t go over well.

When the calendar turned the page to the patriotic month, July, the breezes died and the air boiled, and I decided to drive my kids over to Key West for a day. We were ninety miles from Cuba, blocks away from Hemingway’s old digs. I remember the sound of my daughter’s sun-weakened voice as we stumbled on the sidewalk near the southernmost point in the United States, sweat streaming from our faces. “It’s soooooooooooo hot.” She appeared on the verge of dying. Son, too, usually game, had a look on his face that said, “What in the holy hell are we doing in this heat?”

A short while later, we stood in the palmy back courtyard of the Hemingway House with twenty or so other damp tourists. No air conditioning in sight, we distracted ourselves from the heat by counting six-toed cats and listening to the tour guide, who gamely sported a Hemingway-esque white beard.

He had already escorted us through the main Spanish Colonial house, which featured many pictures of Hemingway at various stages of his famous life and a few original pieces of furniture, including Hemingway’s bed. While the guide told us a story about the origins of the headboard, a shameless cat lay sprawled on its back right in the middle of the duvet, legs spread wide. There are times when the number of jokes running through one’s head is astonishing. I saw in the eyes of others my age the same puerile inner debate over whether they should nail the greatest Hemingway-pussy line ever or just mind manners. In the end, we stayed quiet. Back in the courtyard, my daughter again communicated the effects of the temperature. (“Can we go?” she asked. “Where are we going to go?” I said. “It’s everywhere.”)

Behind the tour guide, a rectangular pool shimmered blue and cool. The guide told us it was once the largest pool in all of Florida and had cost more than the mansion itself. Hemingway’s wife, Pauline, commissioned the pool without Hem’s permission when she found out he was sleeping with the journalist Martha Gellhorn while reporting the Civil War in Spain. When he came home, he found the swimming pool in the courtyard where he liked to host neighborhood boxing matches. He had a little temper tantrum right where we were standing.

“Why don’t you go ahead and take my last red cent!” he reportedly shouted at her, pulling a penny from his pocket and throwing it down. And there, the Hemingway House tour guide said with a knowing flourish, was the very penny, embedded in the concrete. Pauline had saved it under glass or amber or something, a “last word” in an argument if there ever was one. There was light laughter. Family memories, you know?

The guide asked our group to move to a different part of the courtyard for another Hemingway story and more cat appreciation. As we shuffled along, I noticed a quick movement in my periphery, followed by a sound, the sound of a cannonball going off—not the wartime kind but the best kind: a cannonball into the pool.

Somebody from that group over there had broken free and smashed the sacred Hemingway waters. We all gasped, stretched to see. It was some kid, a male teenager (not mine). We, the crowd, made mob sounds that were like the opposite of the vocalizations you make when you see fireworks—anti-oohs and anti-ahhs.

“Oh my God,” my daughter said.

“That was stupid,” my son observed.

The heat had gotten to us. We hated that boy. He broke the rule that we all wanted to break but were too chicken to. We hated him because he stole our idea. The Hemingway-bearded tour guide turned to us on dry land and, hands open in a disbelieving pose, provided a clarification: “That’s a real no-no.”

During World War II, Hemingway had some time to himself. Gellhorn, whom he’d married, was covering the atrocities in Europe. Jealous of her career advancements, alone in his new place in Cuba, probably bored out of his mind and slightly sun-poisoned, Hemingway outfitted his beloved fishing boat, Pilar, with machine guns and patrolled the Florida Straits looking for German U-boats.

To be clear, he hoped to come across a Nazi sub. And shoot it.

Why not? In his life, he’d shot lions, engaged in affairs, picked fights, generally drank too much, and infamously did not mince words. We know this. Which is to say, Hemingway would never utter the phrase, “That’s a real no-no.”

The boy climbed out of the pool, his plaid boxers peeking out from soaked, baggy shorts. He dripped all over the place, as he retrieved his shirt and flip-flops, full of pride—until he saw us sneering at him. His father turned away from the scene, perhaps so he wouldn’t throttle his heir. His sisters tried not to giggle. Security arrived, and when the boy attempted to hand his dry shirt to his mother, she held up her hands to him, the universal sign of all mothers everywhere: I hereby disown you. He was escorted off the premises.

Later, we wandered to Mallory Square for sunset. With the air cooling ever so slightly, and with the aid of cold drinks, a lazy rationality set in. The cannonball didn’t seem so bad. Maybe he’s the only sane one, I thought. Maybe he was just acting, in that hot moment, as his own Hemingway, separating himself from the wearisome masses.

“Can you believe that kid jumped in the pool?” I said to my kids. “I think he might be a hero.”

They made noises and faces to indicate that they did not agree.

Then, up ahead, we saw him walking toward us, still slightly soggy, reunited with his family. No handcuffs. Mom owning him again, Dad probably wondering where to get a beer.

His younger sister saw me and beamed. “Hi,” she said.

Memories, particularly with loved ones, are a curious phenomenon. The good ones often do not fully announce themselves as anything close to “good” when they are happening. It’s only after the event, when a new perspective is gained, that they become an accepted—or funny, or weird, or sweet—episode in family history.

When I was thirteen, on a summer family trip in Maine, we stopped at a small-town gas station and I used the bathroom. When I tried to leave, the door wouldn’t open. I was locked in. I yelled for help and my family gathered outside. The owner of the gas station retrieved a ladder. He told me to stand in the bathroom corner, and he knocked out the glass above the door and tried to stuff the ladder in. It wouldn't fit. There was talk of breaking down the door, calling the fire department.

That’s when I turned the doorknob in the opposite direction I had turned it before. It opened. As my sister, her boyfriend (the future Captain Gary), and my friend cackled with delight, and as the gas station owner realized what had happened, my parents told me to “get in the fucking car.” I did, and we peeled out of there.

I suppose what I’m saying is: in the brutal heat of last summer that kid cannonballed in Hemingway’s pool. We didn’t.

And the rest is family history.

Allen Barra, a native of Alabama, writes a sports column for the New York Observer, the Wall Street Journal and others.
(August/September 1995, Issue 008)