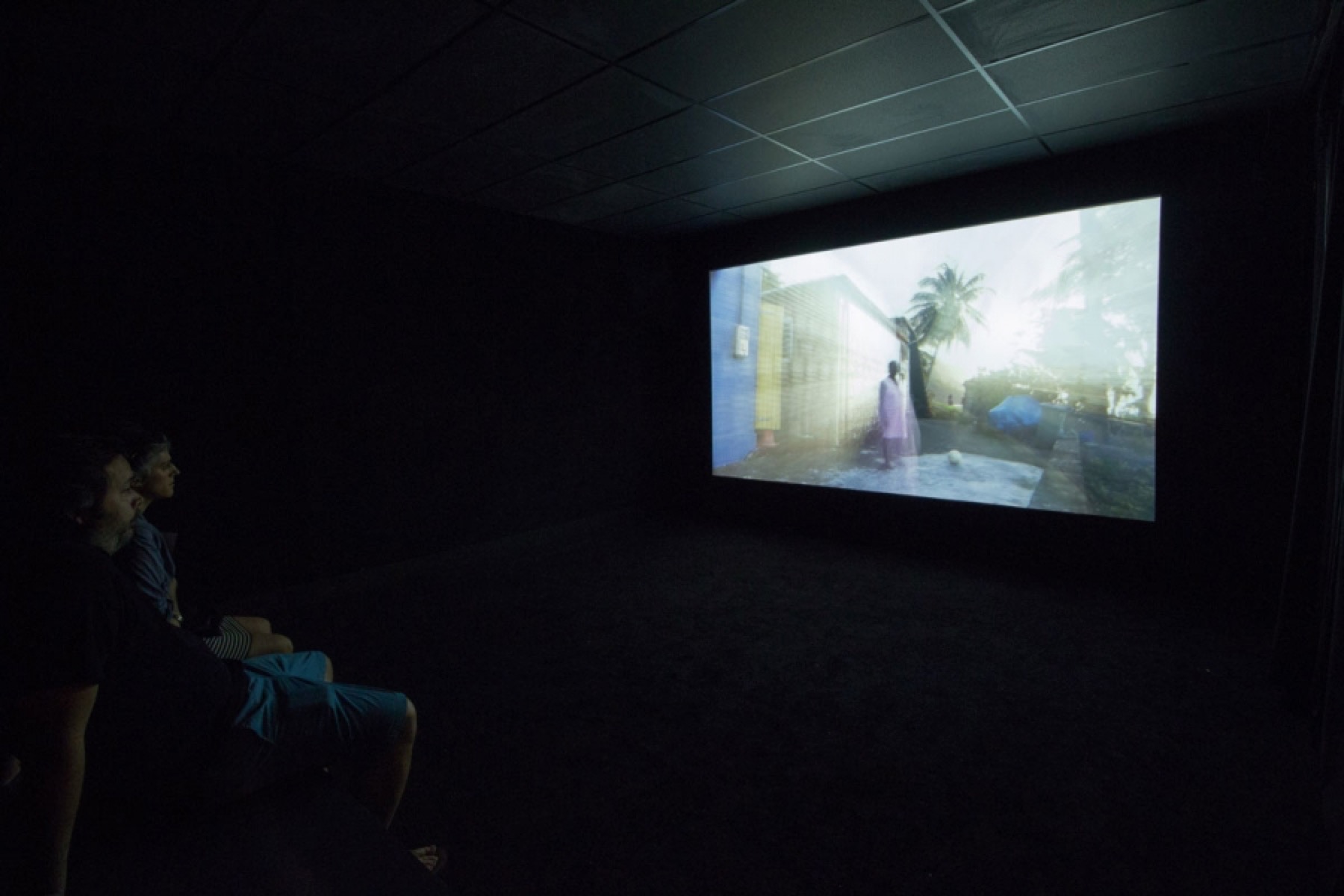 Several years ago, while walking home from a Little Caesars in southwest Miami, I came across a headless chicken, drained of its blood and abandoned in the middle of the street. I later learned that the bird was sacrificed in a Santeria ritual (its placement in the intersection was a suburban approximation of the crossroads: the portal between worlds). The encounter provided further evidence of something I learned the moment I moved to the country’s largest Caribbean city—and kept learning until I left. The tropics will reveal themselves to you, but without warning or explanation.

This was on my mind last month when I visited another Caribbean capital, New Orleans, to make sense of another street scene. Four years in the making, EN MAS’: Carnival and Performance Art of the Caribbean, an exhibition at the Contemporary Arts Center, presents Carnival—dance, music, costuming; all of the inhaled and exhaled culture of the Caribbean and its leaky diaspora—in the context of contemporary art.

Curators Claire Tancons and Krista Thompson commissioned nine artists to stage performances in eight different cities during the 2014 Carnival season. Hosted in places like Nassau, Kingston, and Fort-de-France, as well as in Brooklyn, London, and New Orleans, the performances appear in the EN MAS’ exhibition as a selection of objects and images. That only some of the art is on display at the show, that most of it was left on the streets to evaporate under the sun, seems tenuous. How do you translate the complexity and spirit of Carnival in a dim gallery without bringing to mind the lepidopterist’s pin? Another question: Why New Orleans?

I arrived the day before the opening. Without any official business, I wandered the neighborhood around the museum. The CAC is located on Camp Street in the Arts District—off the French Quarter, across from the Ogden Museum of Southern Art, and around the corner from the galleries of Julia Street and some subsidized artist housing. At the Schramel Conservatory of Dance, ballerinas form silent pirouettes in the windows. At the New Orleans Glassworks & Printmaking Studio, art is both made and exhibited. (This winter, a group of Henry Miller prints were on display.) To visit the area today is to walk among historic warehouses and feel that these stout old buildings have always stored culture. But this is not the case. The neighborhood began rebranding for the World’s Fair in 1984. It was, however, a different international gathering that put New Orleans on the map of the contemporary art world.

In the fall of 2008, Prospect 1 opened. Helmed by curator Dan Cameron, the largest art biennial in the United States was met with skepticism that simmered into applause. New York Times critic Roberta Smith wrote that biennials were “a virus that has spread across the globe. Embraced by cities as tourist magnets and branding tools, they often seem to be stocked by a standard jet set of curators, artists, collectors, and advisers who touch down, in slightly different configurations, at nearly every stop.” The fear was that the standard jet set would bring standardization, a word that could never have been used to describe New Orleans, at least not until the aftermath of Katrina, when politicians and developers brought out the whitewash. The idea that only three years later the city would welcome the contemporary art crowd, with its buying power and global cache, was met with understandable anxiety. Some of New Orleans’s artists felt overshadowed by the influx. That first year, many of the artists were imported, although their projects were full of hope and autonomy. In the face of the economic crash, it was a call for art to both represent and effect social change. However, the economy kept sliding. Prospect 2 was downsized to 2010’s Prospect 1.5, in which the vast majority of the artists were local. This choice might have been due to budget cuts, but it proved that an international biennial could also be local.

If Prospect represents anything, it’s that there needn’t be a tension between the global art scene and its regional subsets. Last fall’s Prospect 3, directed by the curator Franklin Sirmans, presented the work of blue-chip figures like Jean-Michel Basquiat alongside lesser-known artists with ties to the city. Even the theme was locally rooted. When planning the biennial, Sirmans read Walker Percy’s The Moviegoer—a classic in any context, but a cornerstone of the New Orleans canon—as a prompt to understand how we see ourselves, and others. While Binx Bolling, the brooding narrator, moves from the margins of the city into its beating heart, Sirmans noticed how Percy’s novel is both hyper-local in its descriptions of a specific geography and culture, and universal in its focus on existentialism.

But in the way that ourselves and others are synonyms for local and international, this discussion is anything but new. A Confederacy of Dunces, another classic New Orleans novel, bears as its epigraph a quote from A. J. Liebling’s Earl of Louisiana, published in 1961:

New Orleans resembles Genoa or Marseilles, or Beirut or the Egyptian Alexandria more than it does New York, although all seaports resemble one another more than they can resemble any place in the interior. Like Havana and Port-au-Prince, New Orleans is within the orbit of a Hellenistic world that never touched the north Atlantic. The Mediterranean, Caribbean, and Gulf of Mexico form a homogeneous, though interrupted, sea.

The city has a mercurial sensibility that allows it to simultaneously resemble only itself and any number of other places. The flow of the streets and speech, the cuisine and the history—it’s all distinctly of New Orleans, yet testament to the fact that this city was built on trade and traders (and the traded). What better place for EN MAS’, an exhibition stretched between here and there. 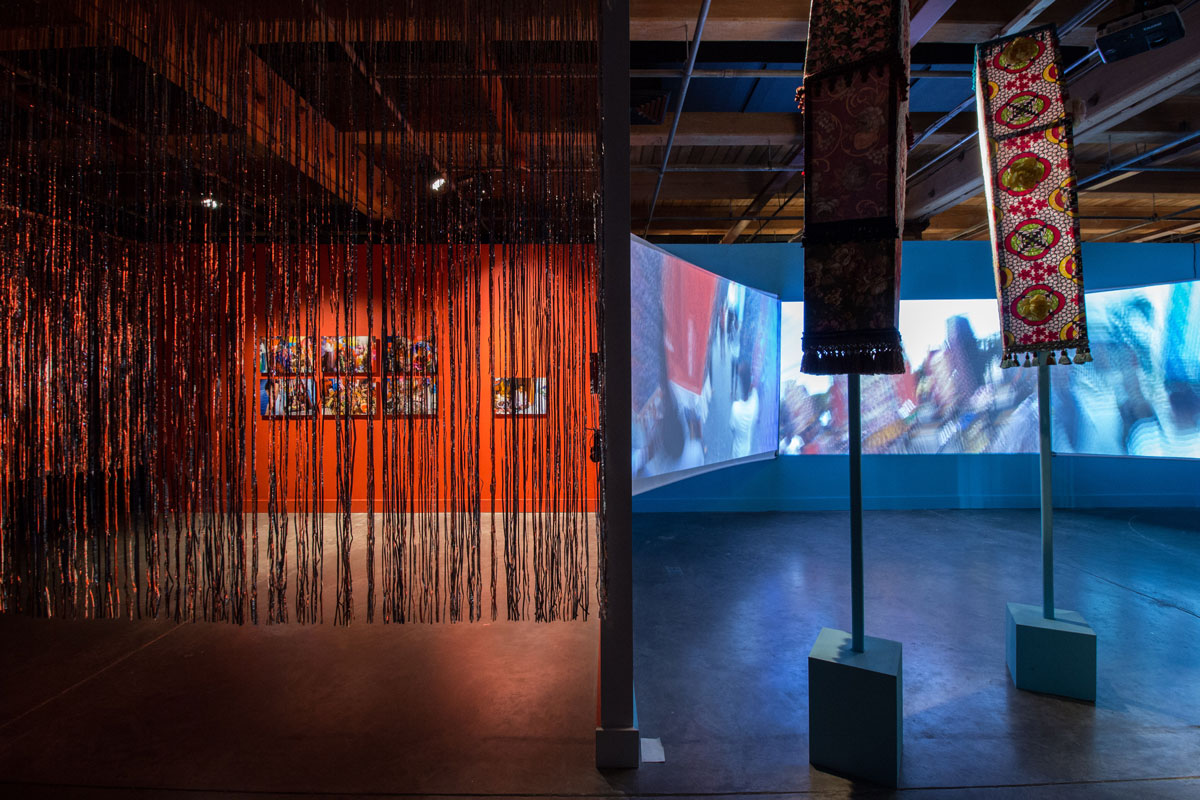 The morning of the opening, a journalist from Jamaica and I met with the two curators on the second floor of the museum for a walk-through of the exhibition. The architect Gia Wolff was commissioned to design it; her task was to create a space that simulated the movement of Carnival—the energy, the flow. She did this by darkening the room as much as possible and installing a grid of spaces in the center, which the viewer is forced to navigate either clockwise or counter-clockwise. Wolff told me that the flow of the exhibition is linear, yet non-directional.

Each section contains the work of a single artist. Although they’re all of similar proportions, each is unique (in the way that booths at trade shows are slightly different). Nearly all of the sections feature photo or video documentation of the performance. This was necessary because the performances had already happened, but the exhibition’s reliance on photography has another level of pragmatism—it is a form that can “come back and travel,” one of the curators told me. The plan is for the show to travel throughout the region, under the auspices of Independent Curators International, and by doing so, to “address the terrible non-circulation” endemic to contemporary art in the Caribbean. It’s ironic that a region so defined by currents of thoughts, objects, and bodies could be cut off from the larger discussion, but that is what has happened when it comes to museum exhibitions about the Caribbean. Regional institutions do not have the funding or the facilities to host large shows such as Caribbean: Crossroads of the World, which debuted at three museums in New York City in 2012 before moving to the Pérez Art Museum Miami in 2014.

The first booth we saw featured the work of Ebony G. Patterson, a Jamaican artist currently based in Kentucky. A three-channel video took over the walls, showing a parade moving through Kingston, boisterous until you realize that the participants are carrying coffins covered in patterned fabric reminiscent of a great-aunt’s sofa. Five of these are on display in the gallery. The videos invigorated the sculptures, as did the backstory—the parade was actually a funeral to honor the 73 civilians killed by the police in the 2010 Tivoli Incursion—but when considered on their own, the coffins felt lifeless.

As we snaked around the exhibition, I thought of something I had seen the previous afternoon on St. Charles Avenue. It was early March, and though the city had been pressure-washed by then, remnants of Mardi Gras remained. Looking up, I noticed bright tangles of beads trapped in tree branches and barbed wire. The colored boughs of cheap plastic seemed completely natural, as if they had sprouted from the city. Still, the sight left me longing for the bodies that tossed them there in the first place.

The next morning I returned to see the only work set in New Orleans, Cauleen Smith’s ten-minute video “H-E-L-L-O (Infra-Sound/Structure).” In the film, the camera first drops from the sky before floating along the surfaces of New Orleans—the water, the streets. There’s a deep siren from the get go, a riverboat calliope, or maybe something non-diegetic. It’s a full minute before we see the source, a trombone player grinding out note after note. On his t-shirt: “Listen to Your City.”

The camera doesn’t stop though. It keeps panning until the man is long gone, the notes with him. Out of frame, out of mind. Then there’s another musician, then cut to a fenced-off set of stairs, another musician. The instruments all differ, except that they’re bass clef, as do the sites, except that they each offer up some history, only to have it evaporate.

Sousaphones curdle the air at the former site of the Colored Waif’s Home—where as a child Louis Armstrong led the band—and at Preservation Hall. The notes spell out H-E-L-L-O, a call and response to the theme from Close Encounters of the Third Kind. One wonders if they shouldn’t be saying goodbye, so mournful is the frequency. Bass is the sound of New Orleans, the bottom of the country, the silty bed of the river.

In the film’s final seven shots there is no music, save for the latent vibration in your ears. And if it wasn’t for Smith, and by extension EN MAS’, this music would have been lost forever, if it were ever played at all. It’s in those seven shots, somehow more cacophonous than the rest, that we understand the importance of recording a moment—what happens on the streets, during the parades—and keeping it safe. Even if that means a needle between the wings. 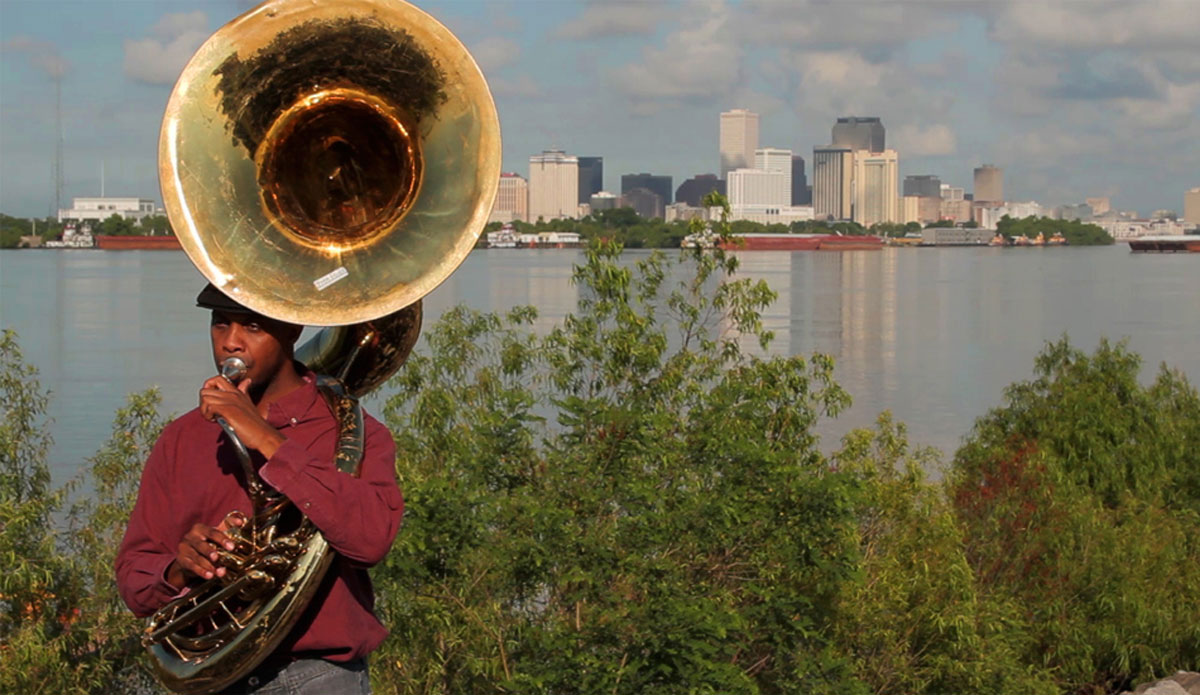 EN MAS’: Carnival and Performance Art of the Caribbean will be on exhibit at the Contemporary Arts Center in New Orleans through June 7, 2015, followed by an international tour organized by the CAC and Independent Curators International.

Hunter Braithwaite lives in Memphis. He writes for a variety of publications, including Artforum.com, The Brooklyn Rail, Modern Painters, and The Paris Review Daily. He is the literary editor of The Miami Rail.

ALEX MAR’S JOURNEY INTO THE OCCULT

COUNTER SERVICE: WHY WE GO BACK