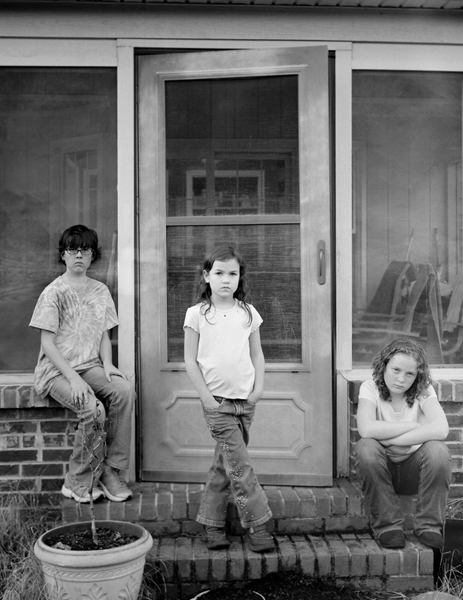 From the ages of nine to eleven, I worked as a spy. No one paid me, nor did I report my findings to any higher-ups. I discussed my cases with my partner, who went by code name Mountain Chicken Mother of the Buddha. Mountain Chicken also happened to be my identical twin sister, and during morning recess or summer afternoons at the neighborhood pool we let lifeguards, teachers, and stray dogs in on our findings. Eventually, the Department of Labor, the U.S. Postal Service, the Virginia State Police, and the State Corporation Commission got involved. Our next-door neighbors were indicted in September of 1998 by a federal grand jury, Joe Bob on eighteen counts and his wife, Jeannie, on fifteen.

Though my neighbors, whom I’ll call the Smiths, didn’t begin their crimes until the mid-’90s, the injustices that sparked our obsession with them began in the summer of 1991, just before my fourth grade year, when, despite sobby objections, Mountain Chicken and I were removed from our childhood home in downtown Charlottesville and relocated to the foothills of the Blue Ridge Mountains. Our parents told us we were moving to a larger house in a better school district, but my sister and I found our new neighborhood, Woodlawn, to be an octogenarian desert, a death star with a view. Nearly all our favorite activities—quizzing our neighbor Amanda about her dad’s handgun, adjusting ponytails during roadside hair salons, squatting in a wooden packing crate and designing codes for use in the secret wars we waged on neighborhood boys—were impossible. Woodlawn didn’t even have sidewalks!

Our new house sat upon a lonely slope, and we took our heartbreak seriously, decrying our misfortune as we trudged the empty asphalt from the bus stop. The only excitement we could muster was for winter, when, if we were lucky, we’d get one of those rare Virginia snows that doesn’t melt by noon. Until then, like the eighteenth-century explorer our new school had been named for, we tried to decode our surroundings.

The students at Meriwether Lewis Elementary were a tight knot of stylish country club kids who welcomed my sister and me by rolling their eyes and calling us both “the new girl,” as though together we comprised one solitary human. Boys spit dip into Coke cans on the school bus and girls talked fashion, expertly weaving the hems of their t-shirts through wooden hoops to create a jazzercise-inspired “swoop” effect. The only kids interested in befriending us were thieves who bilked paint tubes and burlap from the art closet during recess and bragged about it during lunch. Anyone as culturally blind as my sister and I—wearing sweat pants and 1950s school dresses, relics my mother saved from her own school days—was a target for spitballs.

Preoccupied with our suffering, we didn’t notice our neighbors until November brought the inch and a half of fluff it took to shut down county schools. Decked in leg warmers and mittens, my siblings and I were outside before breakfast. Our snow tube easily reached rocket speed, but we couldn’t steer. Where our driveway curved, the sled maintained its course, sending our faces into the trunks of dogwood trees, or, if we missed those, the rocky ditch next to the mailbox.

But the Smiths’ driveway was straight. My brother Kai, Mountain Chicken, and I jumped the fence between our yards, trampled their azalea bushes, and hurtled ourselves toward the empty cul-de-sac. After our first flight, we built a jump on their lawn, enforcing it with plywood my brother hauled from our garage. Our chins grew numb. Our polar-fleece caps fell from our heads. If joy can be measured in speed, then we were the Starship Enterprise, zooming past Woodlawn, past Meriwether Lewis, traveling at warp-speed to the giddy beyond.

Rather than scolding us themselves, the Smiths sent their gardener, a kind man who drove a red truck and waved at all children, to confront my parents. Our neighbors didn’t like kids, he informed us. Not in their house. Not on their driveway. Our sled marks made their snow ugly. The fence between our yards, a rotting zigzag of logs, was there for a reason. We were to never return.

Kai took the news stoically, relocating his studies in velocity to the covert world of C++ text-only gaming. Mountain Chicken and I, however, could not be diverted. “We’re not helpless lumps of Play-Doh,” we whispered, though the past year’s move had taught us that we were. We believed property lines were an illusion and felt it was our higher calling to judge and punish adults who misused their power. Schooled in the heroism of Home Alone and Home Alone 2, we plotted revenge.

After school, when we returned to the house we refused to call home, Mountain Chicken and I spied. In our old neighborhood, kids were plentiful, and voyeurism had taken no effort. Not so in Woodlawn. Perched in the pinewoods just beyond the Smiths’ property line, we discovered in ourselves an aptitude for stillness and an eye for detail.

In their backyard, the Smiths had installed something between a European garden and a Putt-Putt. Bushes, trimmed to right angles, framed an enormous swimming pool. Winding brick paths connected circles of decorative cement. The numerous garden statues—a little boy in a red soldier’s coat, three metal ducks, a life-size porcelain zebra—were eerily lifelike, as though Jeannie or Joe Bob had waved a golden wand and turned houseguests into figurines. The most incriminating feature was a three-story pole bedecked with the flag of our nation. This was the ’90s—nobody, besides schools and courthouses, waved flags. “Mark it down,” we whispered, while we pried the pinesap from our hair. “That much patriotism ain’t normal.”

Mountain Chicken and I took notes on wide-ruled paper and developed a sort of rudimentary Marxism to explain what we observed. Our new classmates came from money and our old classmates did not. It seemed more than just coincidence that the Meriwether Lewis kids were meaner than their less well-to-do counterparts. Wealth, we’d deduced, had no small relationship to cruelty. Our neighbor’s garden wasn’t just fancy; it was too fancy. Their shrubs, we felt certain, had been bankrolled by crime.

Though still a subdivision, Woodlawn was in the country. What we lacked in nearby pals, my mother made up for in canines. As a kind of peace treaty for the move, she let us adopt dogs from the animal shelter. My brother selected Dingo, an orange-red mutt who ran fast and played rough. Sugar belonged to my sister and me. She was a shaggy darling and she loved nothing more than herding cars and then sunning on our lawn while we brushed out her mane.

Our neighbors weren’t so charmed. They sent their gardener over to tell us that if Sugar chased their car again, they’d escort her to the pound. The Smiths’ threat to send her away bolstered a suspicion Mountain Chicken and I already had: that our neighbors were Nazis. Why, we wondered, as we shooed our dog back to our side of the fence, did the Smiths receive so many packages? Every afternoon around three o’clock, FedEx came to Woodlawn.Two hours later, another FedEx truck would rumble up their driveway. “It’s probably drugs,” we told the Meriwether Lewis thieves, who’d by now become our friends. “Either that or children. There could be dead children in those boxes.”

Since their various ultimatums had been couriered by the kind gardener, Mountain Chicken and I had never actually met the Smiths. Like ghosts, our neighbors were felt rather than seen, and their invisibility was a happy convenience—grim accusations lose their fun when you can picture the person you’re insulting. Though our sleuthing was richly imagined, we were caught off guard when a real police officer knocked on our door and asked if anyone at our address had been making harassing phone calls to a bed-ridden retiree. Actual crime, we quickly learned, was far less intoxicating than our speculative version. To prove we weren’t responsible, my father proposed that the cop tap our phone. A few weeks later, the officer reported that the harassing calls took place when no one was home. “Someone must be hacking your box,” he said. “You’re off the hook.”

By ninth grade, we’d quit spying and found our groove. When we weren’t running repeats with our cross-country team, we were shouting obscenities from friends’ trampolines. But our obsession twinkled brightly back in December when my father opened The Observer and announced, over cereal, that the Smiths were on trial. Operating as administrators for a firm called Duke Benefits, Jeannie and Joe embezzled health insurance premiums, leaving the editors of their unlikely accuser, The Journal of Neurosurgery, without coverage. In response to the allegation, Joe was marvelously cryptic: “When you begin making your charges,” he told one reporter, “you better have your face straight or they certainly will come back to haunt you while you eat them.” In another article, he threatened to “sue [The Journal] right between the eyes.”

Vengeance is delicious. Though it’d been seven years since we’d first moved to Woodlawn, Mountain Chicken and I revived our tale of espionage, bragging during school lunches as though we’d cracked the case ourselves.

“Did you know the Smiths tried to sell fake burial insurance to the Mississippi Choctaw Tribal Council?” we’d ask. “Our grandmother’s church went bankrupt. Mrs. Smith was the treasurer. Her husband built her a climate-controlled boudoir for her furs. They chartered private jets.”

That neither of us could define the word “embezzlement” was but a detail. Our neighbors swindled more than a dozen companies, including a labor union, a handful of plumbers, and the Isle of Wight County School System. They stole from their own relatives, sending one elderly aunt and her retarded adult son into foreclosure. Clients and reporters told tales of threatening phone calls.

If convicted on all counts, the Smiths faced a combined 275 years in jail and $7.5 million in fines. (Joe Bob was eventually sentenced to 41 months in prison—Jeannie to 40 months—and they were ordered to pay a combined $3.5 million.) Even the gardener got involved, cashing kited checks for Jeannie in the weeks after her arraignment, when she was too notorious to request bank services herself.

For years, their house sat empty, and, in a strange way, we missed them. When you have someone to hate, there’s little impetus for self-reflection. Life falls into easy categories. Mountain Chicken and I were grateful for their nastiness. Their crimes made us smug. Having nearby enemies distracted us from the loneliness we felt when we first moved to Woodlawn. The Smiths confirmed our conviction that we were victims, not beneficiaries, of adult decisions. They taught us that instincts can be right. Though good doesn’t always trump evil, it can. When we spoke of the Smiths, it was with a dizzy kind of pride. They were our neighbors. Their fall was our victory. We suspected first. We knew all along.Image: "Gragg," 2012, by Trish Gibson

Anya Groner received her MFA in fiction from the University of Mississippi, where she was a John and Renee Grisham fellow. She now teaches writing at Loyola University in New Orleans. To read more of her writing go to anyagroner.com.