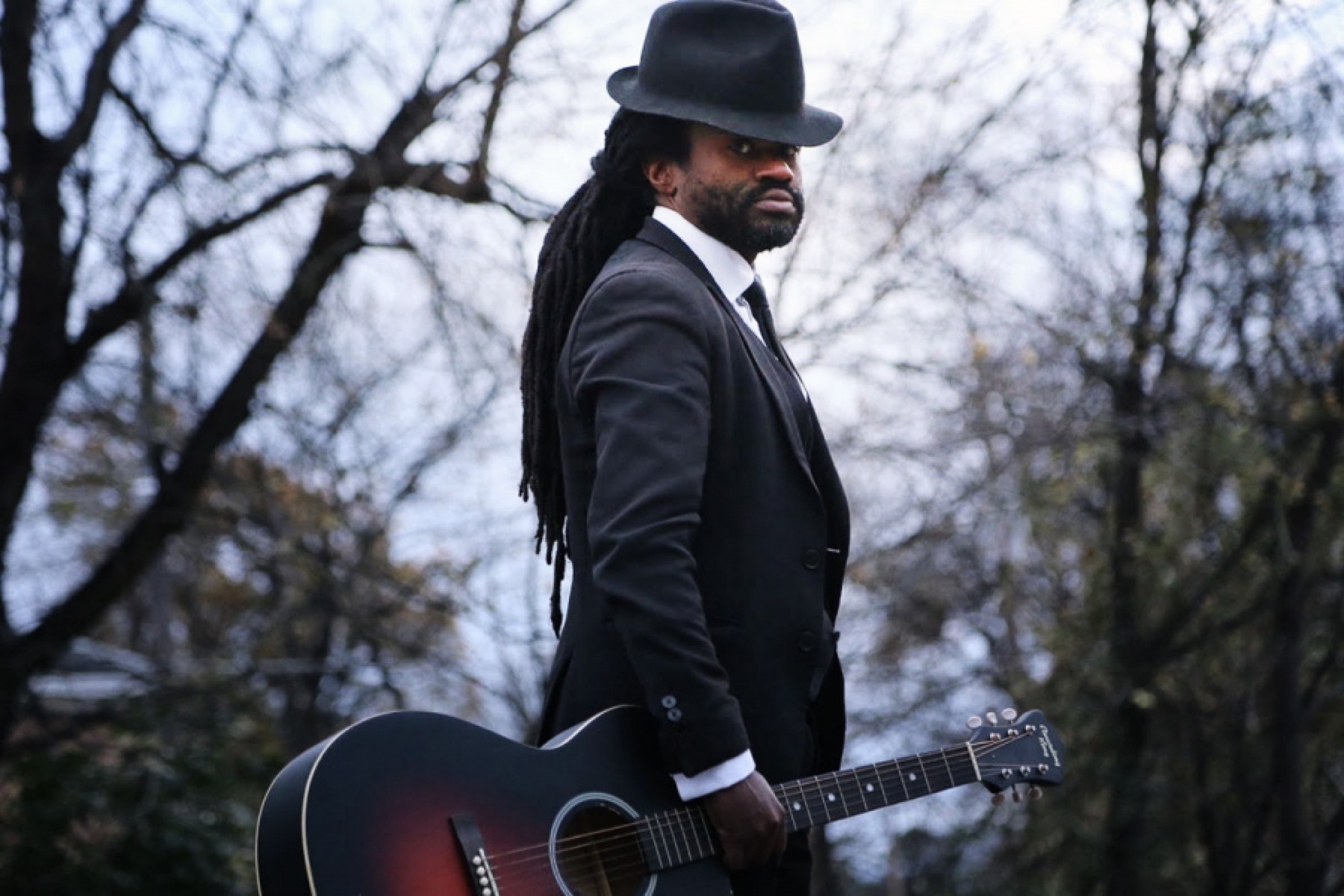 Tell the Truth and Shame the Devil

Preacher, activist, author, and bluesman Rev. Sekou’s powerful new album, In Times Like These, featuring Luther and Cody Dickinson, is out on May 5, 2017. Listen to the album below, and read an essay by Rev. Sekou.

I remember the first time that I heard the word, nigger. It was a beautiful fall day in the Delta. The sky was a bright blue and leaves were auburn. It was not too cold—just a slight chill. My grandmother, Mama, called it “jacket weather.” Our temperamental washing machine had taken it last spin.

We lived in the distance away from the wares, and tears, of the modern world. While my childhood was isolated, it soon lost its innocence.

The nearest laundry mat was situated at the edge of a trailer park. As we made our way in, I saw a twenty-something young woman with a child about my age, six. He had a firetruck and I had brought with me favorite Hot Wheels car. I was excited and so was he. “Mommy, Mommy, look at the niggers. Look at the niggers,” he proclaimed.

I had never heard the word before, but I knew it was not a good one based on the furious look on Mama’s face. I began to cry. “Hush up, boy,” she commanded. “You gotta tell the truth and shame the devil. I didn’t let them run over me when they was lynching us and I ain’t gone start now.”

“You know how children are,” the mother feigned.

“No,” Mama stated without raising her voice, yet visibly fuming. “Children do what they are taught.” She was looking the woman square in the eye. “You taught him that.”

The little boy and I never said a word to each other. For the rest of the afternoon, we played around but not with one another.

Late in the midnight hour, Mama often prayed over me. “Lord, this is a mean ole world. Don’t let him hate. Let him return love for hate. Satan, I rebuke you. In the mighty name of Jesus.”

As a child, I thought God lived over our kitchen sink because that is where she talked to him the most. We always listened to the radio in the morning—“I got to see what white folks was doing while I was ’sleep,” Mama would say—and after hearing unfortunate news, her hands covered soap suds, she would look up yonder and call God into account. “You said in your word that the prayers of the righteous availeth much. I need you to protect this boy from the trouble that is waiting on him.”

Long before I came along, my grandmother was chasing the devil back to Hell. At 4'11'', she had stared down a lynch mob with the pistol that she was known to keep in her purse. They came to our family home to fetch her first-born son, who had gotten into a fight with the son of a wealthy land owner. After a few shots in their direction, they knew she was not playing and left with great haste. She was good for that—challenging the powerful yet respecting the powerless.

Mama taught me to read when I was four years old. It was my job to read the mail for Miss Roberta, who could not read but carried a wisdom that I am yet to adequately conceive of. She dipped snuff, walked with a cane, and was indeed royalty, and she loved me. Zent, Arkansas, was a kingdom of dignity. Folks like Miss Roberta tore off the best pieces of themselves and sowed it into a quilt that shields me to this day. If it was not for that covering, I would have long been consumed by rage.

Zent was an eleven-house hamlet nestled in the rural Arkansas Delta. The thirty-five folks who lived in a time now forgotten were a blues people, who loved Jesus; the men in particular were given to Jack Daniels. Their bodies bore the kind of scares that made Robert Johnson sell his soul just to play guitar. After a week of working from can’t-see-morning to can’t-see-night, they always had more week than money. When the eagle flew on Friday, they paid what bills they could. My grandfather, Richard Braselman, would sweep the front yard. Mama called him Daddy. A former chitlin’ circuit sideman for Louis Jordan, Daddy would push the slightly out of tune piano out onto the front porch for the regular Saturday night fish fry. They would dance, cut up, and curse away the troubles of week if not the world. The blues was their balm.

Somewhere between a hard lash and a longing for home, the blues was born. The blues give life by telling the truth about the darkness, but they never let the darkness have the last word. The tension between hope and hopelessness makes for flats and chords in minor keys; dissonance—two notes so close yet so different—is where the harmony is found. Joy and tragedy are not in opposition; they simply coexist, on a dusty dance floor. Like the Spirituals, blues is the stuff that faith is made of—staring at the sheer ugliness of life in face and making beauty of nothingness. That thing that allows a sold-away slave to lament, “Sometimes I feel like a motherless child,” and in the next verse celebrate, “Glory Hallelujah.”

Or Daddy, drunk at the piano, singing, “I been down so long that the blues don’t get me down.” The blues was also correction and compassion.

The day at the laundry mat wore on, Mama packed up and we prepared to leave. As we headed to the door, we heard a whimper. The woman was crying and her little boy was trying to console her. As far as I could tell, the woman had run out of coins for the machine. Mama turned around, walked over to her, and, never saying a word, gave the woman two rolls of quarters and unopened box of washing powders. In the parking lot, Mama looked at me and admonished, “Boy, you speak truth with grace.”

We got in the car and she turned on WDIA. Louis Jordan’s “Saturday Night Fish Fry” was on the radio. Mama smiled and so did I.

Rev. Osagyefo Uhuru Sekou is an activist, author, documentary filmmaker, theologian, and musician. Born in St. Louis and raised in the rural Arkansas Delta, Rev. Sekou is the author of two collections of essays: urbansouls, a meditation on poor black youth in St. Louis, hip hop, and religion, and Gods, Gays, and Guns: Essays on Religion and the Future of Democracy. His debut album is In Times Like These, featuring Luther and Cody Dickinson of the North Mississippi Allstars.

EVERYTHING ABOUT HIS MUSIC WAS INTERESTING

FROM COUNTRY TO CITY